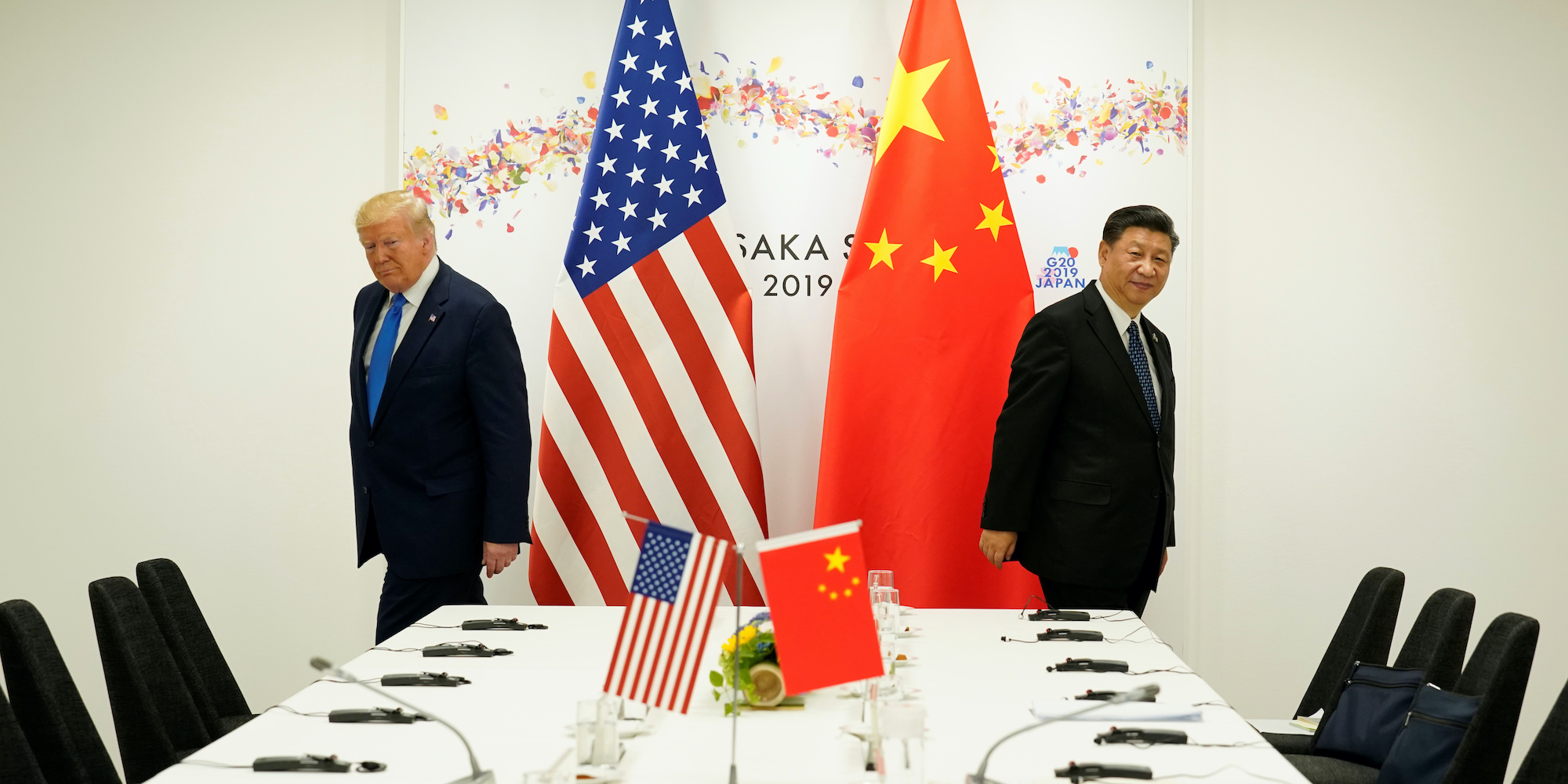 The relationship between the US and China was already teetering close to the edge of a cliff before COVID-19, but the pandemic pushed it right off.

The dynamic between Beijing and Washington has become so contentious in the coronavirus era that China experts now say the two major powers have stumbled into the early days of a new Cold War that could prolong the pandemic, exacerbate the economic devastation linked to the virus, and weaken the world’s ability to thwart common threats.

“We’re essentially in the beginnings of a Cold War,” Orville Schell, the director of the Centre on US-China Relations at the Asia Society, told Insider. “We are on a downward slide into something increasingly adversarial with China.”

Schell added: “The consequences of the breakdown in US-China relations is going to be very grave for the world and for the global economy because the ability of the US and China to work together was the keystone of the whole arch of globalization and global trade. With that pulled out, there’s going to be a tremendous amount of disturbance.”

The Cold War analogy is “not perfect, but there are elements, including the hardening of system-type competition, ratcheting up of military competition, and pressure to delink economically, that were not as evident a few years ago,” Elizabeth Economy, the director for Asia studies at the Council on Foreign Relations, told Insider.

“The reality is that tensions between the United States and China are rising considerably at the moment,” Clete Willems, the White House’s former top trade negotiator, told CNBC earlier this month.

“I know people get uncomfortable with the terminology, but I do think we have to be honest and call this what it is, and this is the start of a new Cold War. And if we’re not careful, things could get much, much worse,” Willems, who left the Trump administration last year, added. ReutersThe relationship between China and the US was already on shaky ground before COVID-19.

The Cold War between the US and the Soviet Union was a product of the times. World War II devastated large swaths of Europe and Asia and left the US and the USSR as the most powerful nations on the planet. But they had fundamentally conflicting ideologies, which was at the heart of the decades-long standoff between the two superpowers.

Though China is an authoritarian nation and does not share the same worldview as the US, the two countries are far more intricately connected – especially on an economic level. Before the coronavirus pandemic, China held $US1.09 trillion in US debt, surpassed by only Japan as the US’s top foreign creditor.

Bonnie Glaser, the director of the China Power Project at the Centre for Strategic and International Studies, told Insider there were elements of US-China competition “reminiscent of the US-Soviet Cold War,” adding that there are also fundamental differences in terms of the “extent of trade and people-to-people interaction.”

“Here’s one big difference between the Cold War with the Soviet Union and today with China: At the end of the Cold War, I think America was importing something like $US200 million worth of goods from the Soviet Union. American imports for China in 2018 were north of $US500 billion,” former UK Prime Minister Tony Blair said in a recent interview with Fareed Zakaria of CNN.

Blair said there was “an interconnectedness, economically and in trade terms,” between the US and China that just wasn’t there in the US-Soviet Cold War, describing the dynamic between the two countries as the “determining geopolitical relationship of the 21st century.”

The US-Soviet Cold War created a massive ideological, military, and political schism in the world, what former UK Prime Minister Winston Churchill famously referred to as the “Iron Curtain.” There are concerns that the present-day animosity between Washington and Beijing could lead to a similar global divide.

“For the international system as a whole, a Cold War would be devastating. It would, for example, place all global challenges – from climate change to pandemics to terrorism – in the context of the relative power gain and loss for each side, making cooperation even more difficult,” Economy said. “It would also force countries to choose a side, in the process making very difficult trade-offs and likely revealing a number of ugly truths about themselves: how they prioritise their political values, their military security, and their economic livelihood.”

America’s relationship with China is vital to tackling future pandemics on top of the other “most critical national security issues before us,” including the proliferation of weapons of mass destruction and climate change, Melvyn Leffler, a historian at the University of Virginia who has been researching and writing about the US-Soviet Cold War for decades, told Insider.

Leffler, who has warned against allowing Cold War analogies to frame contemporary US-China relations, said the consequences of the deterioration of the US-China relationship are “ominous” for both countries and the wider world.

The Cold War between the US and the Soviet Union was characterised by an intrinsic distrust between Washington and Moscow and a hypernationalistic competition for economic, military, and technological hegemony.

Similar trends are playing out between the US and China.

Since his 2016 campaign, Trump has portrayed China as a global bully that’s taken advantage of the US (even as he’s showered Chinese President Xi Jinping with flattery on numerous occasions). As president, Trump sparked a trade war with China, raising anxiety about the US economy across partisan lines. A deal signed in January seemed to put the trade war on pause, giving Trump a diplomatic victory to tout as he sought to campaign for reelection on a booming economy.

But then came the coronavirus, which tanked the economy, put the deal at risk, and spoiled any hope of a detente in the near future. Though Trump praised China’s handling of the virus in its early days, before it was a pandemic, he’s shifted to bashing the Asian country at every turn and blaming it for the scale of the pandemic.

China has been widely accused of exacerbating the pandemic by suppressing information on the virus, which originated in the Chinese city of Wuhan.

The president and his advisers have taken this a step further, however, by suggesting the virus leaked from a Wuhan lab that researches bat coronaviruses. The World Health Organisation, among others, has generally tied the origins of COVID-19 to a market where seafood and wild and farmed animals were sold.

Meanwhile, Beijing has vehemently rejected the notion that the virus leaked from a lab, and China’s Ministry of Foreign Affairs in March suggested COVID-19 came from the US military.

As the governments spread conspiracy theories about the other, Trump has raised the possibility of seeking reparations from Beijing over the virus. The president last month also announced plans to slash funding to WHO, which he accused of being too China-centric.

At the same time, the administration has moved to cut funding to American researchers who’ve collaborated with the Wuhan lab, jeopardizing progress on finding a cure for the virus in the process. Similarly, the Justice Department has been working to squash Chinese influence in American academia, which is reminiscent of former Sen. Joe McCarthy’s Red Scare.

Concurrently, the race to create a coronavirus vaccine has become a point of national pride for both countries, drawing comparisons with the space race between the US and Soviets.

The tit for tat between Beijing and Washington over the coronavirus has also extended to the media world. After Trump placed limitations on the number of Chinese citizens who can work in the US for five state-run Chinese news organisations, China in March expelled American journalists working for three of the most prominent US newspapers.

The antagonism is not limited to the Chinese or US governments and has seeped into the US public. Americans’ favorability views of China have hit a historic low during the pandemic, according to a recent Pew Research survey, giving Trump a backdrop for an aggressive China policy. Both Trump and Xi are to blame

The roots of this new potential Cold War go back many years and predate Trump, but he’s also been a central player in the unravelling of relations between the US and China.

“There’s no doubt that some of the actions the Trump administration has taken have contributed to this,” Schell said, adding that the president is “singularly unfit to do any kind of a diplomatic negotiation with anyone.”

But it’s also undeniable that Beijing has been “the prime mover” in terms of driving a wedge between itself and Washington, Schell added, having failed to rectify the “problem of the myriad unlevel playing fields between the US and China before Trump came in.”

Trump was right that the dynamic between the US and China was imbalanced, Schell said, but “he’s quite wrong and chaotic in the way he’s gone about seeking to regroup and reformulate a new kind of relationship with China.”

“Xi Jinping has been equally remiss and short-sighted,” he added. “You have two leaders who are blinded to the necessity of working a new framework out and thus headed into a spiral that puts us in the middle of a new kind of Cold War.”

Scott Mulhauser, a Democratic strategist and former chief of staff at the US Embassy in Beijing, told Insider that “moments like this require experienced hands to engage where opportunities exist – and to push back and balance where inequities need fixing and problems need solving.”

He added: “This haphazard approach to the pandemic, the trade war, and the China relationship has cost us jobs and even lives – and there’s seemingly no end in sight, barring a different electoral outcome in November.”