Those levels, however, are messed up. They’re broken, contain enemies that have no place within them (a Goomba underwater?!), and look completely bananas. They’re the bastard children of Nintendo’s most revered game, hidden away in the annals of each cartridge’s ageing chips. These are levels Nintendo never intended anyone to see, and the company’s never really spoken about them as a result.

But guess what? Intrepid Nintendo enthusiasts have cracked a crazy secret process for unlocking these hidden levels.

There's one well-known secret world in the original 'Super Mario Bros.' -- it's called the 'Negative World.'

It's just one of many of the hidden levels contained in 'Super Mario Bros.,' and it's perhaps the most widely known. You can reach it by performing an awkward backwards jump in the game's second level, 1-2, like so: The level itself is just a standard underwater level, though it's impossible to progress beyond it. Exiting the level results in a loop. And a copy of 'Tennis' for the original Nintendo Entertainment System: And a top-loading Nintendo Entertainment System: Like this guy, but with a top-loading NES instead of an original model.

At any point during the first level, 1-1, pull the cartridge out of the system while the system remains powered on. BEWARE: Yes, this might break your NES, and your game. Try this at your own risk.

Replace the 'Super Mario Bros.' cartridge with the 'Tennis' cartridge in your top-loading NES. Press the reset button. The menu screen should appear, like so: Start a one-player game and get moving around.

After a minute or so, pluck the 'Tennis' cartridge from your NES and replace it with 'Super Mario Bros.' Hit the reset button.

When 'Super Mario Bros.' reloads, it will load into one of the hundreds of secret levels in the game. Just look at this:

Even crazier? Every time you do the trick, you get a different secret level:

If you can get your hands on a working Game Genie -- a device for hacking 'cheats' into games -- there's an even easier way to just input a code and access all these levels. And for more information on the hundreds of secret levels in 'Super Mario Bros.,' check out this episode of 'Pop Fiction' from GameTrailers.com! 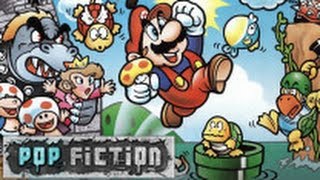