12 of the 'most Instagrammable' hot springs in the world 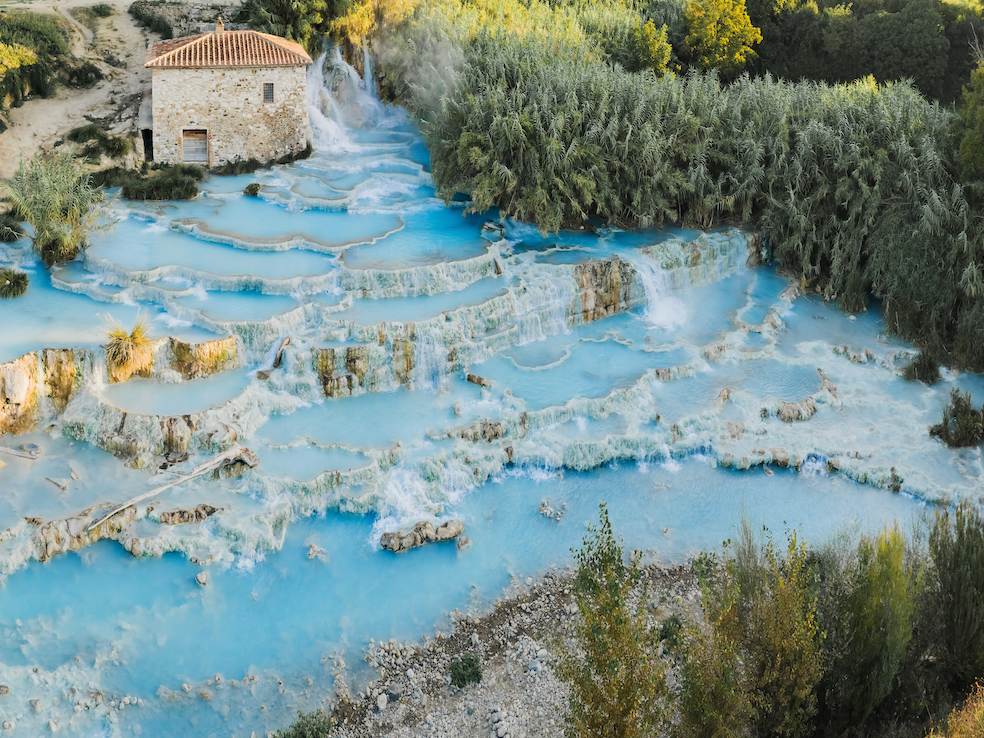 ShutterstockTerme di Saturnia in Tuscany, Italy, made it in the top 12.

Some of the most beautiful and exciting destinations in the world are steamy hot springs.

UK holiday park operator Parkdean Resorts recently published a ranking of the “most Instagrammable” hot springs around the globe to round up some of the prettiest falls and pools.

From Budapest’s opulent spas to California’s heart-shaped waters, read on for a deeper look at the 12 “most Instagrammable” hot springs, ranked in descending order.

12. Located in Villarrica National Park,
Termas GeomÃ©tricas is the largest complex of hot springs in Chile 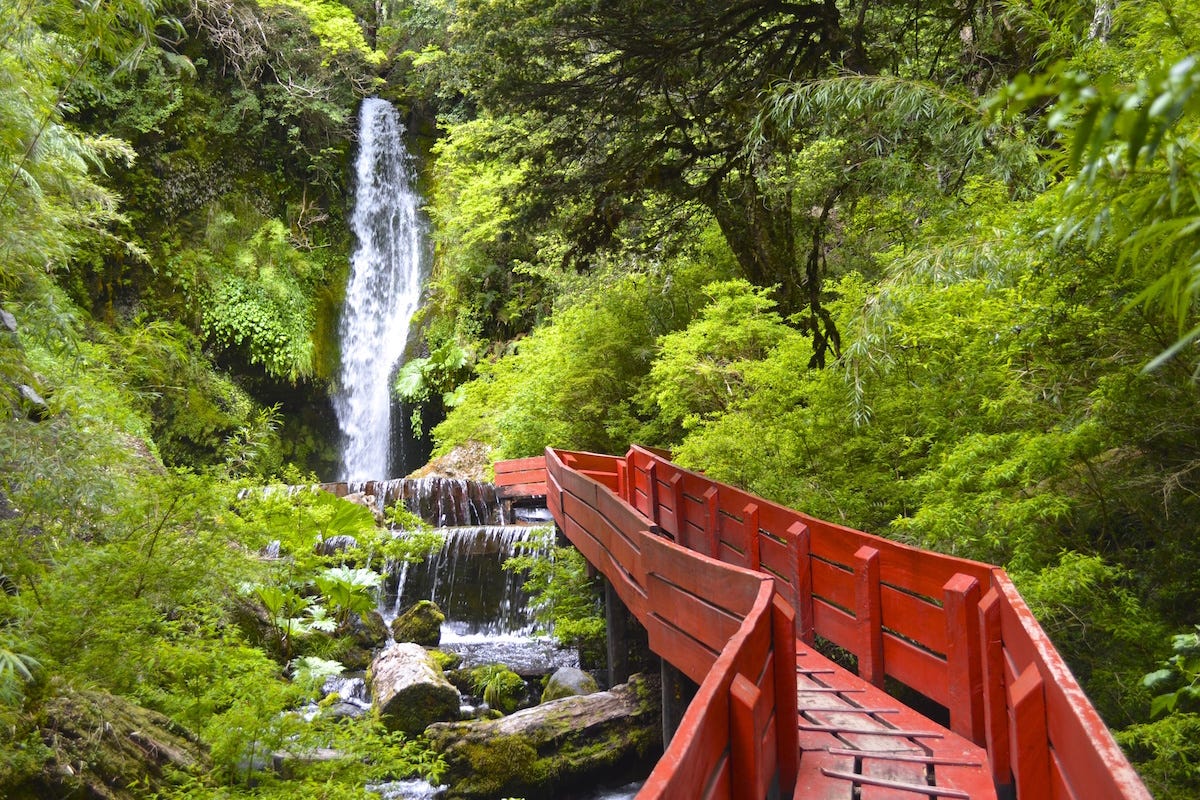 Designed by architect GermÃ¡n del Sol, Termas GeomÃ©tricas is a hot-spring complex structured in the form of a maze.

Immersed deep within the Villarrica National Park near the city of PucÃ³n in Chile, this architectural masterpiece is situated next to the AihuÃ© stream.

Below the stream, healing thermal waters bubble at up to 113 degrees Fahrenheit, thanks to their proximity to the magmatic layer of the Villarrica volcano.

Each pool has a small, covered space next to it where people can sit or get changed. There’s also grass planted on the huts’ roofs, making them look as a natural continuation of the park’s vegetation, rivers, lakes, and waterfalls.

11. Aqua Dome is a deluxe spa resort in Tyrol, Austria, that offers superb alpine views from the inside of a big thermal basin 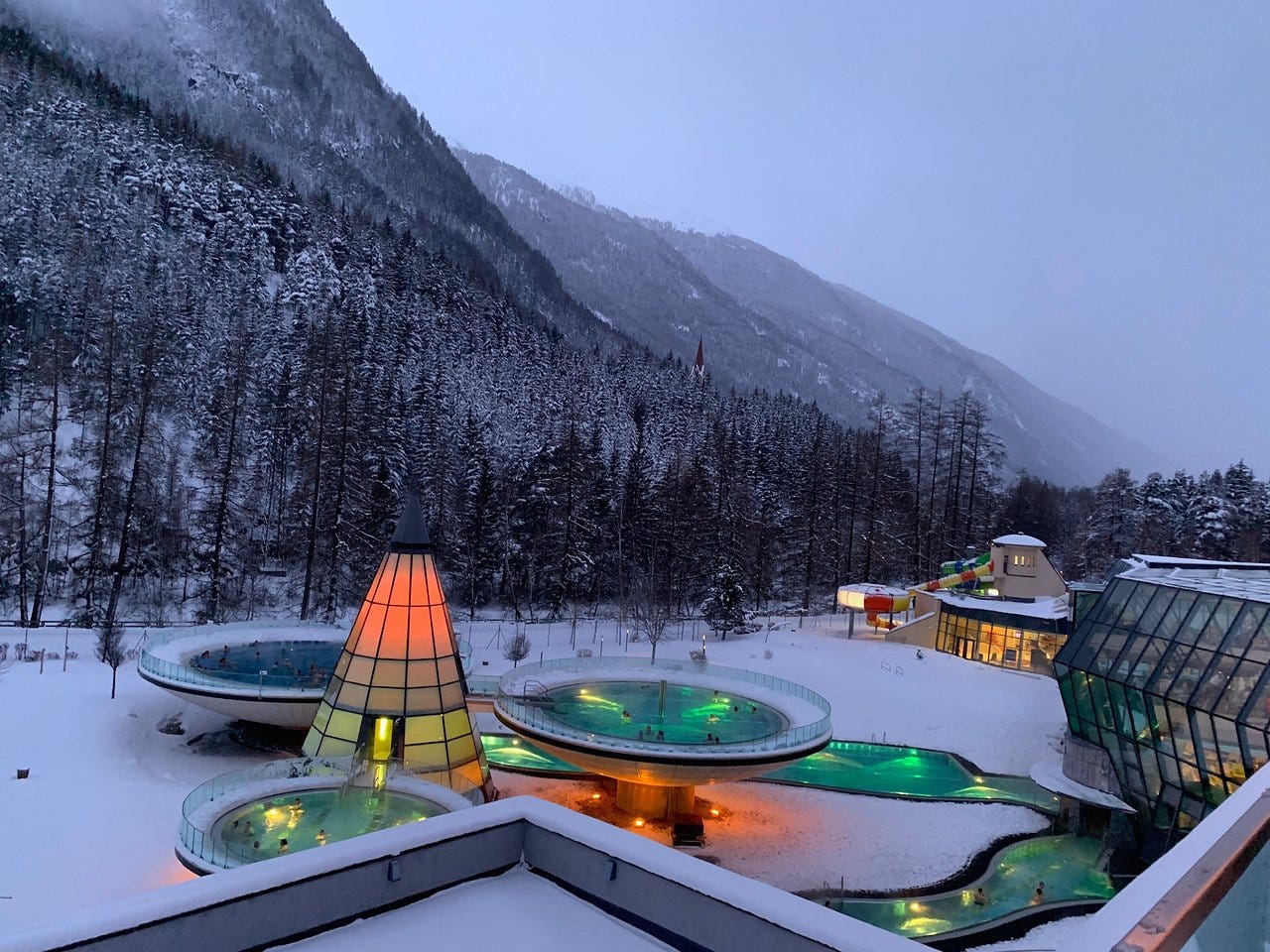 At this futuristic thermal resort, visitors can float in a large brine basin filled with warm water just under 100 degrees Fahrenheit while gazing at the magnificent Alps.

Located in the heart of the scenic Ã-tztal valley, Aqua Dome brings together natural materials, like wood and stone, with modern ones, like glass and steel.

Guests who stay at the Dome’s hotel can also try the SPA3000. This premium service allows guests to view the Ã-tztal Alps through a panoramic glass panel while getting the royal treatment in one of the indoor mineral baths. 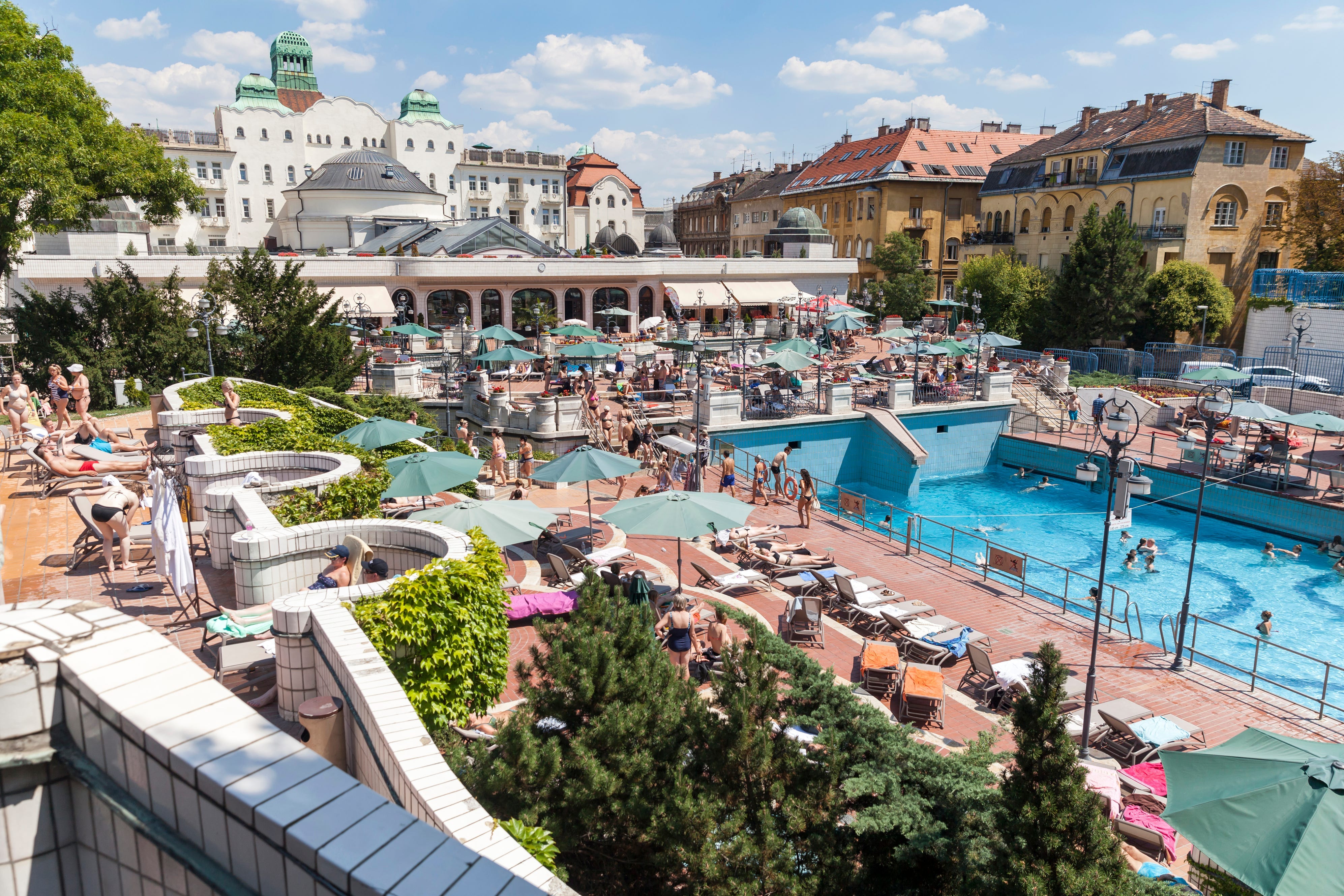 With more than 100 thermal springs, it’s no wonder the city of Budapest in Hungary presents some of the world’s most impressive medicinal baths and spas.

Located within the lavish Hotel GellÃ©rt, the GellÃ©rt Baths stand out for the grandiose Art Nouveau furnishings, stained-glass windows, and intricate mosaics, which could easily be part of a stylish Wes Anderson movie set.

The GellÃ©rt Thermal Bath and Hotel opened in 1918, but its springs go back even further

The water sources on the property go back centuries, and the hotel opened in 1918. The establishment was damaged in World War II but was fully refurbished decades later, attracting tourists from around the globe ever since.

Visitors can choose to soak in one of GellÃ©rt’s two effervescent bath sections, three outdoor pools, and eight thermal bath departments, with water temperature going up to around 104 degrees Fahrenheit.

9. Peninsula Hot Springs in the Australian Mornington Peninsula is a geothermal spa oasis 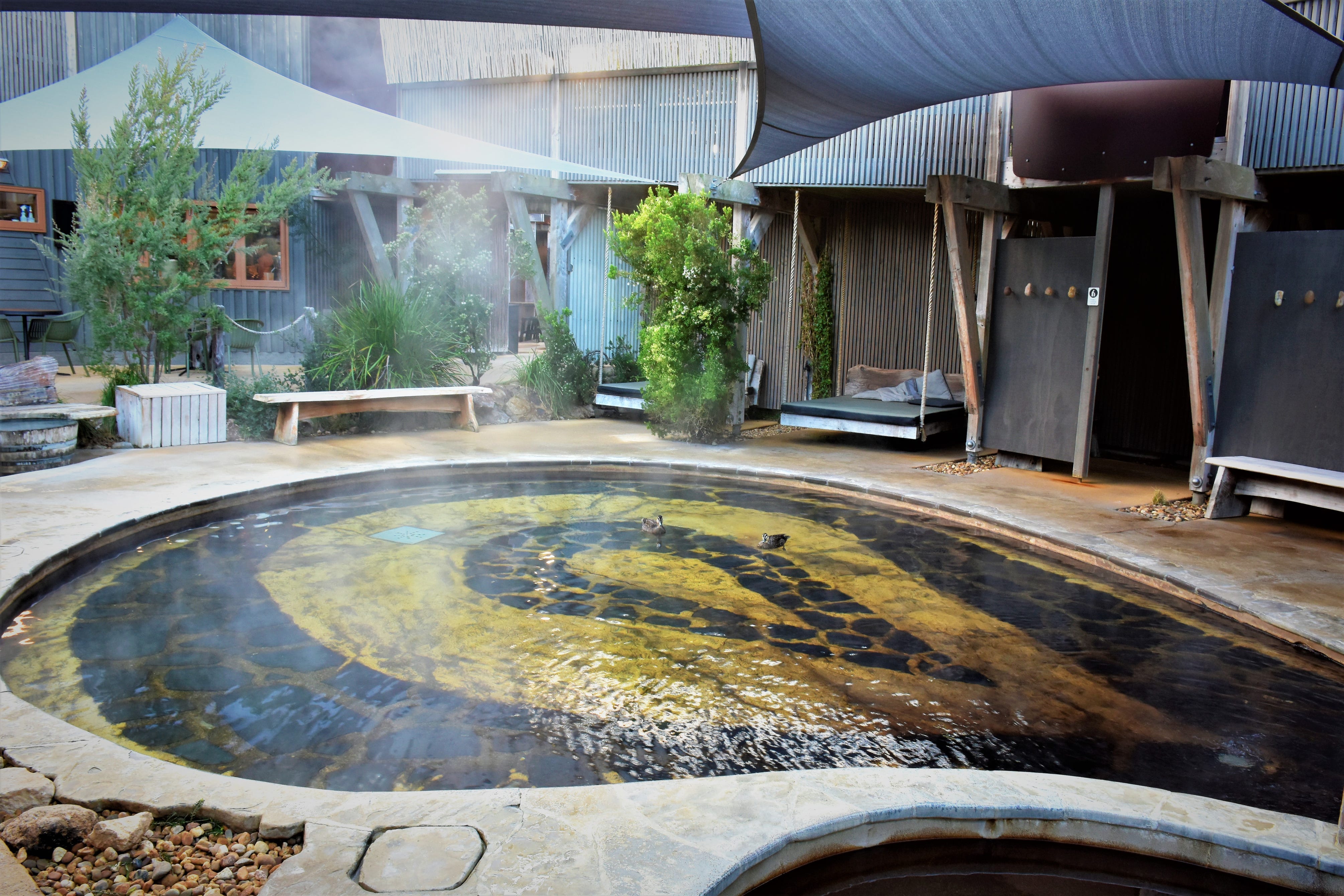 Natalia Vostrikova/ShutterstockPeninsula Hot Springs has a range of services.

Peninsula Hot Springs in Victoria, Australia, fuses over 50 globally-inspired bathing experiences that are built around the Mornington Peninsula’s geothermal mineral waters, which flow into indoor or outdoor pools and baths.

Some of the areas feature fun amenities like underwater speakers, hammocks, cafes, ice caves, and saunas.

Guests can also stay at Peninsula’s luxurious tents for a glamping experience.

8. The town of Kinosaki in Japan brims with
hot springs and bathhouses 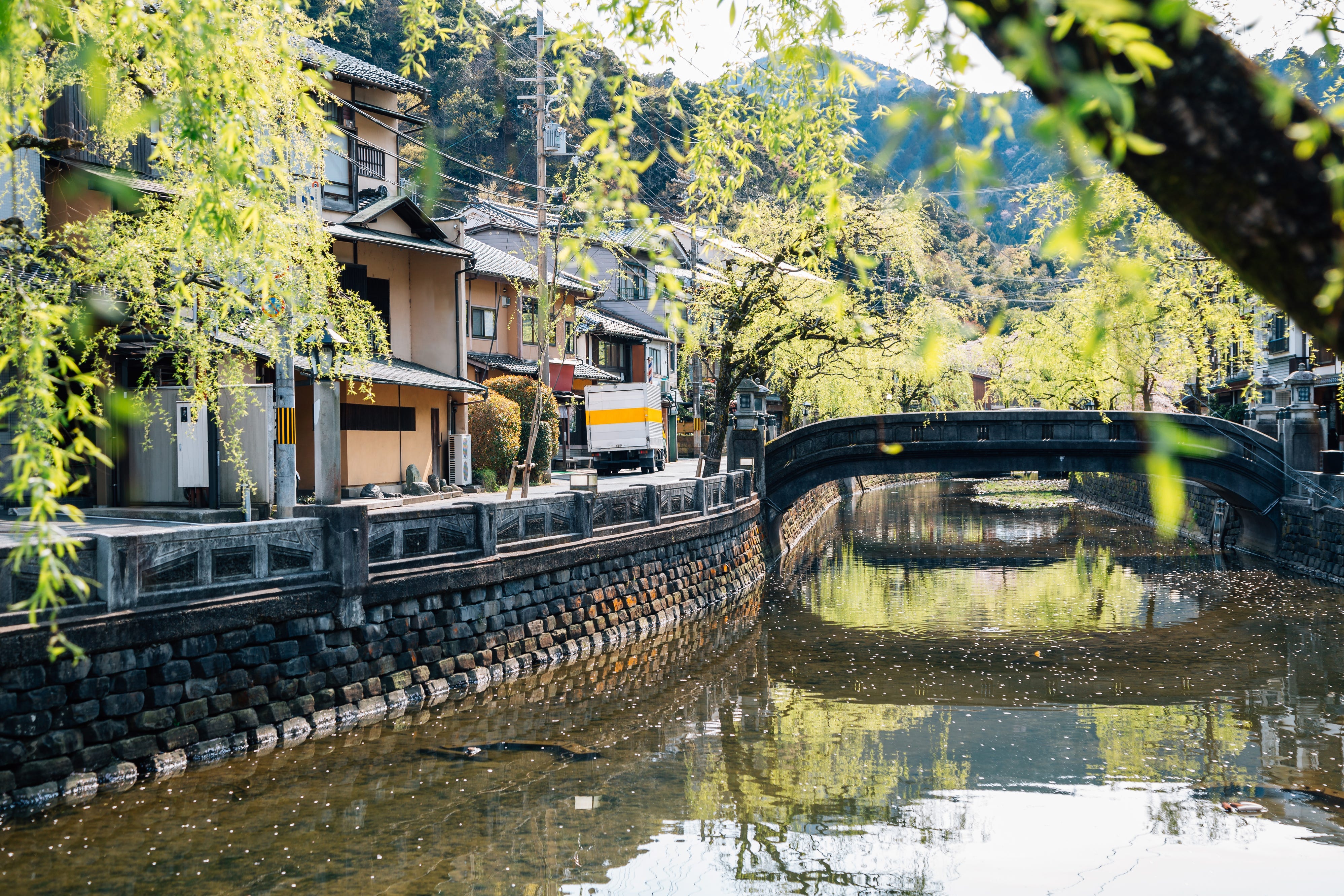 iStock / Getty Images PlusKinosaki is known for its hot springs.

This Japanese town is so dedicated to unwinding in hot springs that it has developed seven distinct bathhouses.

Built along a willow-lined river off the Sea of Japan’s coast, the charming Kinosaki is a top onsen (hot spring) destination in the Kansai region.

The town’s hot springs were discovered around the eighth century, and visiting the baths has become a common pastime for locals ever since.

Waterfalls, mist rooms, saunas, and outdoor baths are some of the area’s many
offerings

The spring water has a temperature of around 176 degrees Fahrenheit but is regulated at around 107 degrees in the bathhouses. It contains a wealth of minerals with healing properties said to cure fatigue, digestive issues, nerve and muscular pain, and bruising.

The bathhouses are free to access for those staying at a local ryokan, a type of Japanese inn. It is recommended that visitors bring their own towels.

7. Grutas Tolantongo is a natural hot-spring park in Hidalgo, Mexico, that has cliffside infinity pools, caves, and waterfalls Located in Hidalgo, Mexico, Grutas Tolantongo is a park of hot springs surrounded by nature.

The pools are literally built into a cliff, straddling different levels, which makes for some mesmerising views.

The caves, rivers, and tunnel overflow with warm waters that produce steam that rises out of the trees in a dream-like manner.

The resort is accessible by car and by bus. It also has a restaurant and a hotel, if you’re looking to stay. 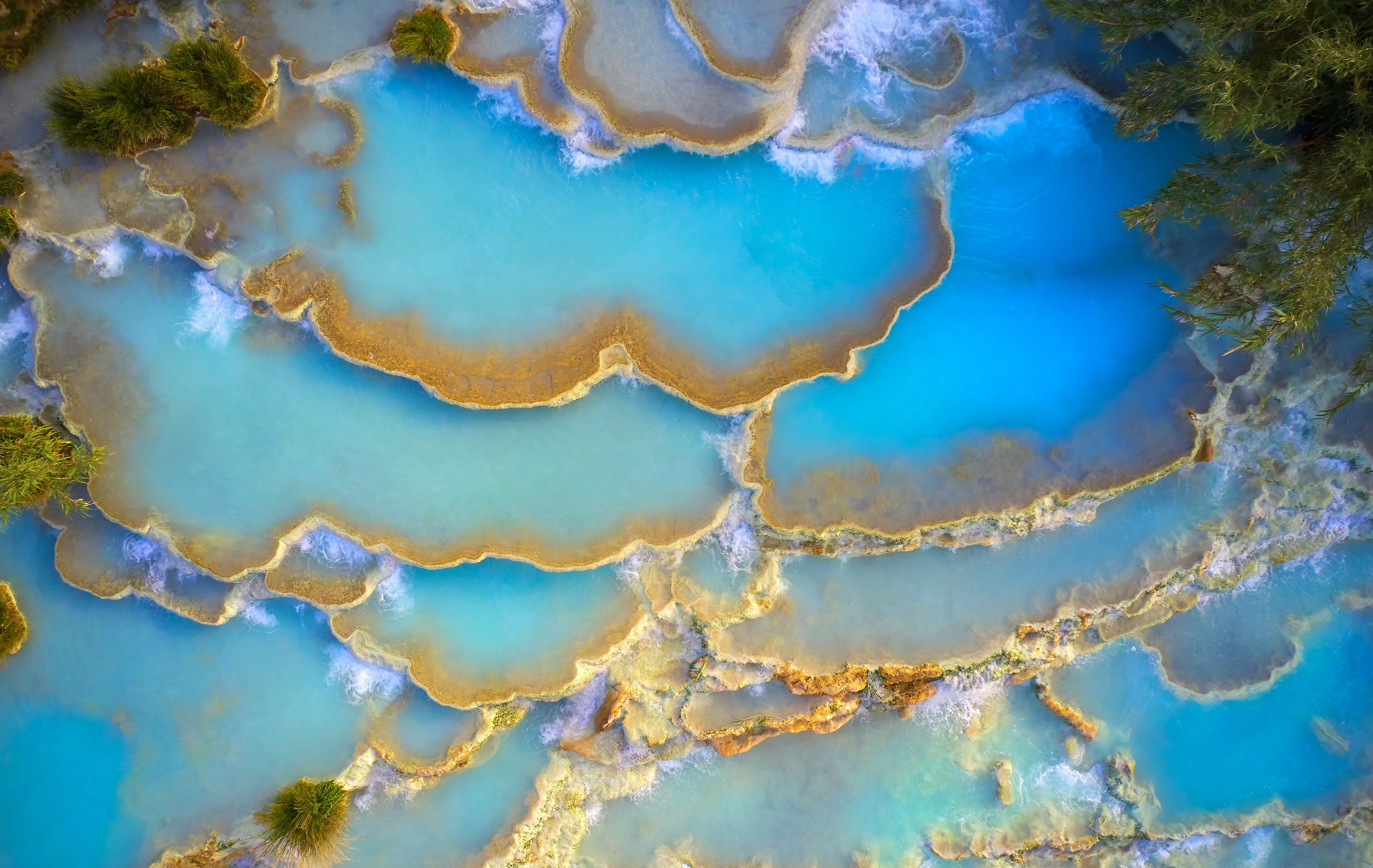 ShutterstockTerme di Saturnia in Tuscany, Italy, is said to be created by a god.

The thermal springs of Saturnia, an ancient village in Italy’s Tuscany, are so beautiful that some believe they were created by the hands of a god.

According to legend, god of peace and abundance Saturn threw a thunderbolt into a volcano crater, causing a river of water to flow over plains and mountains, thus bringing peace and quiet.

All myths aside, the sulfurous Terme di Saturnia springs have been around for centuries and are said to benefit those with certain skin conditions and muscle ailments.

The village is now known among visitors as a proper spa town, where 800 litres of water per second flow over the land and its various formations. The water is just under 100 degrees Fahrenheit.

The town’s most iconic spot is the Cascate del Mulino, a gorgeous setting where hot, white waters from the waterfalls continuously drop on limestone, forming a group of natural pools. 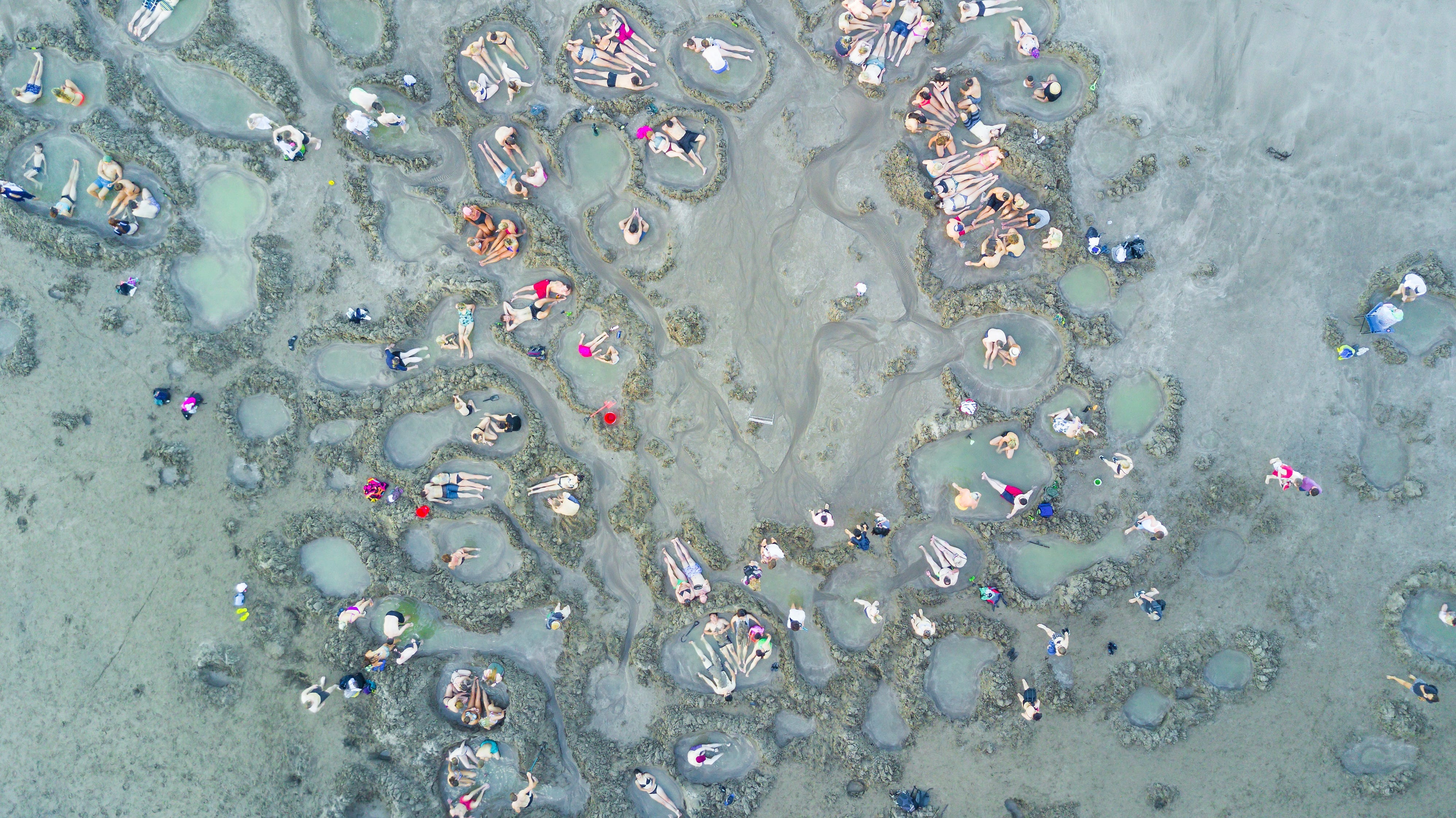 Matthew Micah Wright/Getty ImagesBe sure to bring a shovel to Hot Water Beach.

Visitors might have to dig a little deeper for this underground thermal wonder, but it’s definitely worth the effort.

Hot Water Beach, on the east coast of the Coromandel Peninsula in New Zealand, gets its name from the hot springs bubbling beneath the surface of the sand.

The water below can be as hot as 150 degrees Fahrenheit before it reaches the surface, naturally filtered, at low tide.

Less than two hours before or after low tide is when locals and tourists tend to flock to this otherwise quiet beach.

Opposite the off-shore rocks, visitors dig large holes and create their own private pools of thermal water that resemble otherworldly moon craters.

To join in the fun, people can either bring a shovel along or rent one from the nearby surf shop. Swimming is also an option, but visitors are advised to be careful of the strong currents.

4. The thermal waters of Hanmer Springs in Canterbury, New Zealand, intertwine with the highland landscape 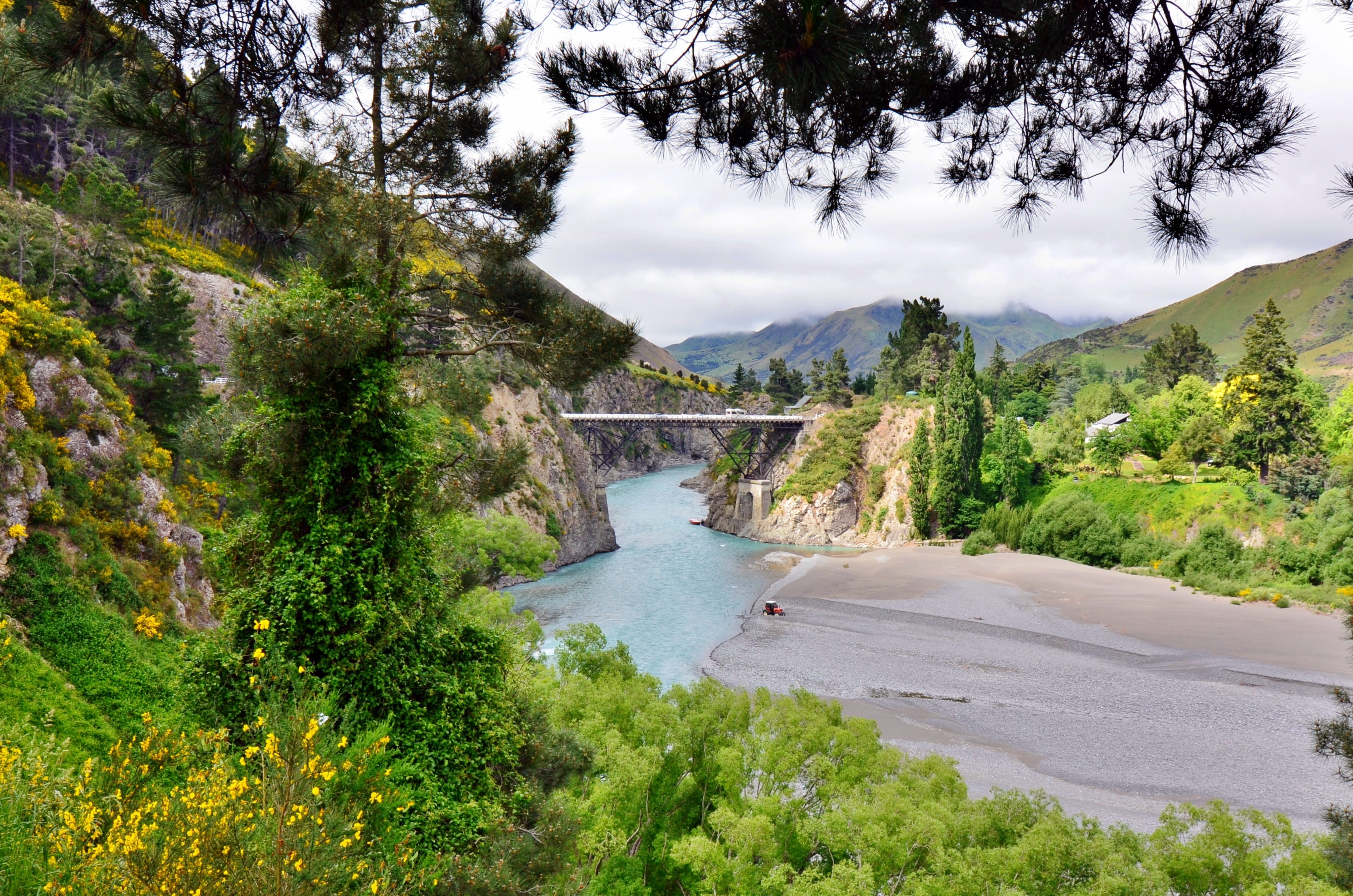 The small town of Hanmer Springs in Canterbury, New Zealand, is built around hot springs gushing from a fractured bedrock.

Although this alpine village is famous for its numerous mountain trails and ski slopes (ideal for some serious hiking), its natural hot springs turn it into an Instagrammable delight.

It’s also worth visiting the popular Hanmer Springs Thermal Pools and Spa. Guests can relax in one of its 22 outdoor thermal mineral, sulfuric, and freshwater pools with a range of temperatures.

3. Visitors can soak inside a secluded, heart-shaped hot tub in Mammoth Lakes, California 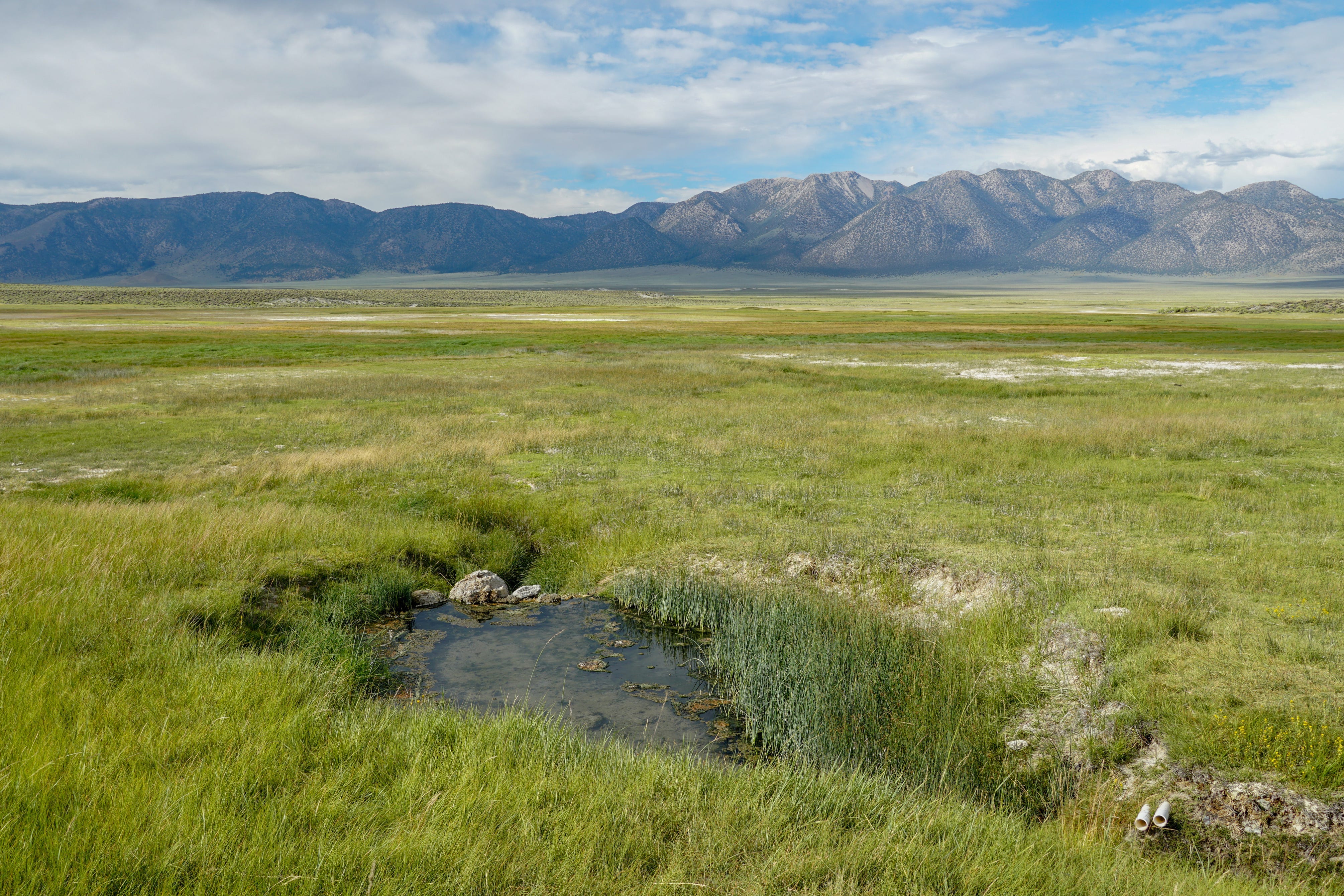 Situated on the edge of an ancient volcanic caldera in Mono County, California, the town of Mammoth Lakes and its surrounding area boast a number of marvellous hot springs.

Wild Willy’s may be the most picture-perfect of the three, as it is shaped like a heart

Taking a selfie in Wild Willy’s warm, aquatic heart is an Instagrammer’s dream come true. Most of the area’s hot springs are secluded, so guests are advised to organise their visit in advance if they want to experience as many as possible.

2. Housed in a sumptuous Neo-baroque palace, the Szechenyi Spa Baths in Budapest are a popular spot 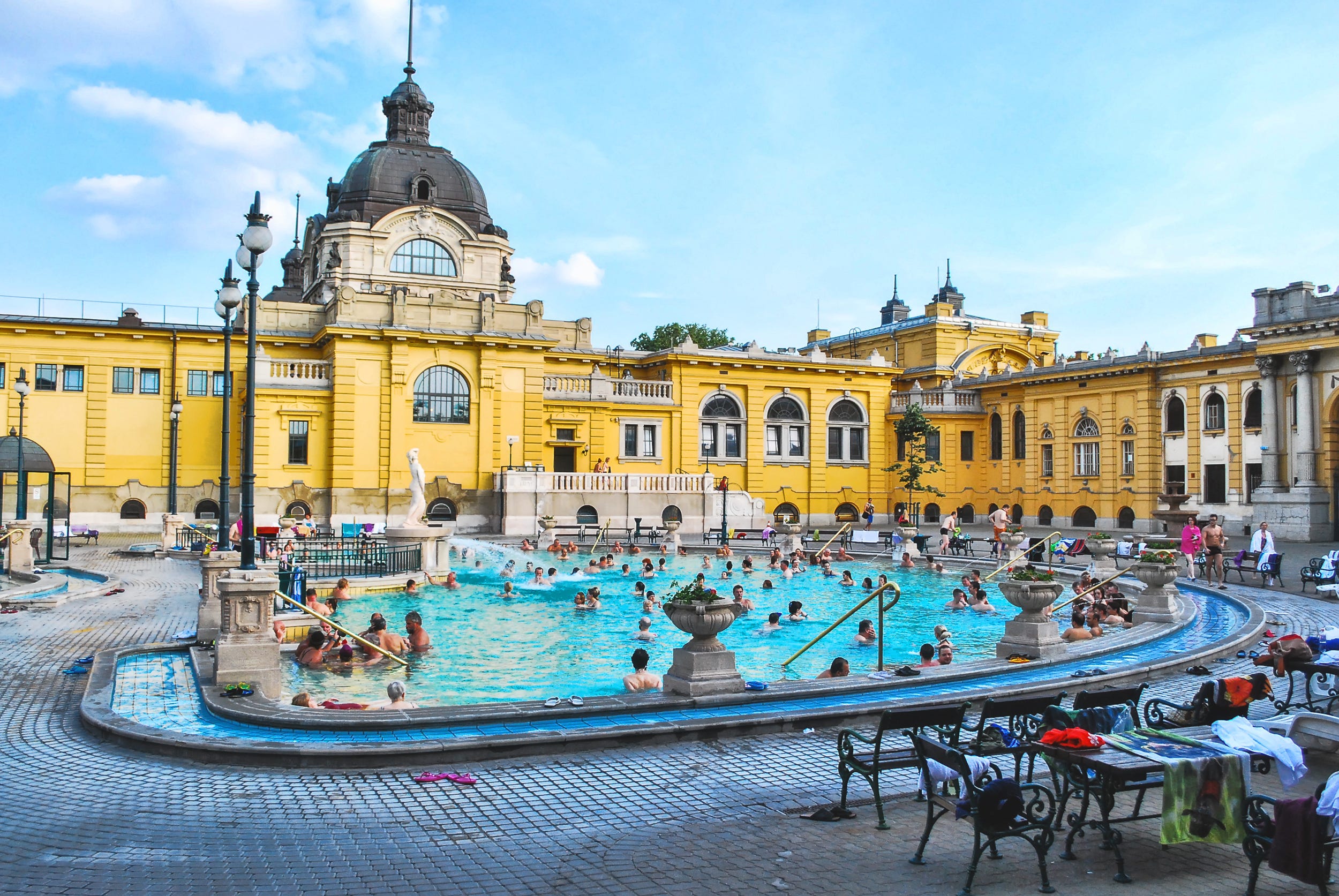 One of the largest medicinal baths in Europe, the Szechenyi Spa Baths in Budapest, Hungary, remain one of the city’s most visited sites.

The baths were built between 1909 and 1913 in the City Park and designed by architect GyÅ’zÅ’ Czigler in Neo-baroque and Neo-Renaissance styles that make them extra photogenic.

Aside from attracting visitors from all over the world, this
marvel also serves as many Hungarians’ go-to meeting point

With 15 indoor baths, three outdoor pools, 10 saunas, and services like massage therapies, facial treatments, and aqua fitness, it makes sense that Szechenyi is one of the city’s most frequented hubs for romantic and business meetings alike.

1. With its milky-blue waters contrasting a black lava field, the Blue Lagoon in Iceland is a man-made geothermal paradise 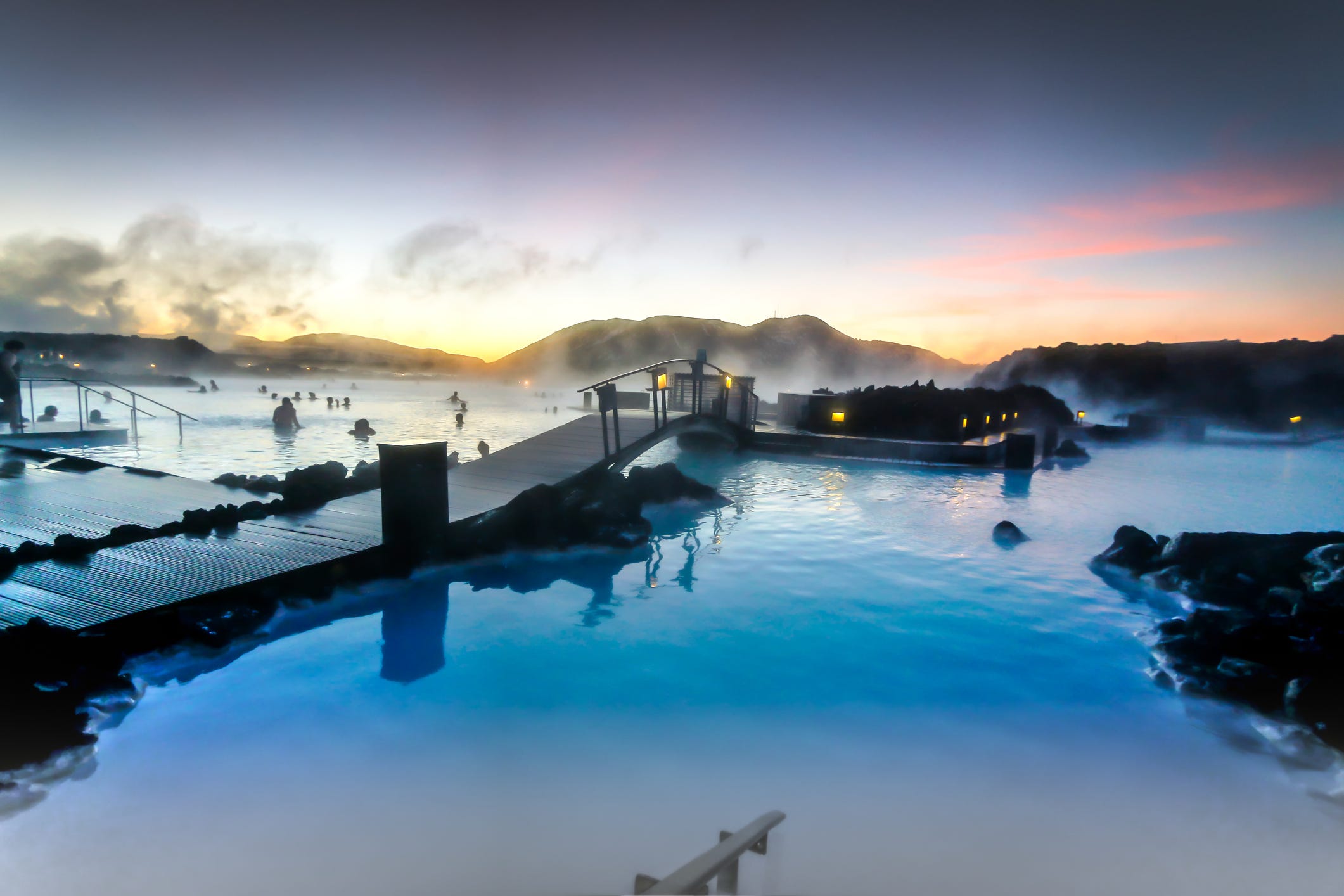 Located on the Reykjanes Peninsula in southwest Iceland, a region known for its barren soil and cone-shaped volcanoes, Blue Lagoon is famous for a reason.

Its hot waters’ milky-blue shade contrasts the surrounding black lava field, composing one of the most mind-blowing views.

Formed in 1976, the lagoon is supplied with water from a nearby geothermal power plant

The Blue Lagoon is man-made and dates back to 1976. The water, which is supplied from a nearby geothermal power plant, renews itself every 48 hours and sits at around 100 degrees Fahrenheit year-round.

The Blue Lagoon spa will let visitors swim in it for a fee and, due to the popularity, pre-booking is absolutely required.

To make the most of the magical landscape, be sure to visit the Blue Lagoon in the evening to see the midnight sun or the glorious Northern Lights, depending on the season.


Visit Parkdean Resorts’ site for the complete list of the most Instagrammable hot springs.

21 of the most ‘Instagrammable’ restaurants in the world

The most breathtaking view in every US state

10 of the ‘most Instagrammable’ cafes in the world