Sundar Pichai was awarded $281 million in compensation last year. Here's how the Alphabet CEO got his start and rose to become one of the world's highest-paid executives. Sundar Pichai has had a meteoric rise since joining Google in 2004.

Last December, Google’s cofounders Larry Page and Sergey Brin announced that Pichai would be taking over as Alphabet CEO, as both Page and Brin stepped down from their leadership roles at the company.

Up until that point, Larry Page was still CEO of Google’s parent company, Alphabet, and Pichai had the incredibly important job of making sure that the company’s core businesses and cash cow – Search – stayed strong. Now, he’s CEO of both Google and Alphabet.

Jillian D’Onfro contributed to an earlier version of this article.

Pichai, whose full name is actually Pichai Sundararajan, grew up in Chennai, India. Pichai’s father was as an electrical engineer and his mother a stenographer before having him and his younger brother. The family wasn’t wealthy, and the boys slept together in the living room of their two-room apartment, according to a 2014 Bloomberg profile by Brad Stone.

Early on, Pichai had a talent for remembering numbers, which his family realised when he could recall every phone number he had ever dialed on their rotary phone. He will still sometimes show off his memorization skills at meetings, Bloomberg reports.

After becoming interested in computers — the first software program he wrote was a chess game — Pichai studied metallurgical engineering at the Indian Institute of Technology Kharagpur. His success there won him a scholarship to Stanford University. 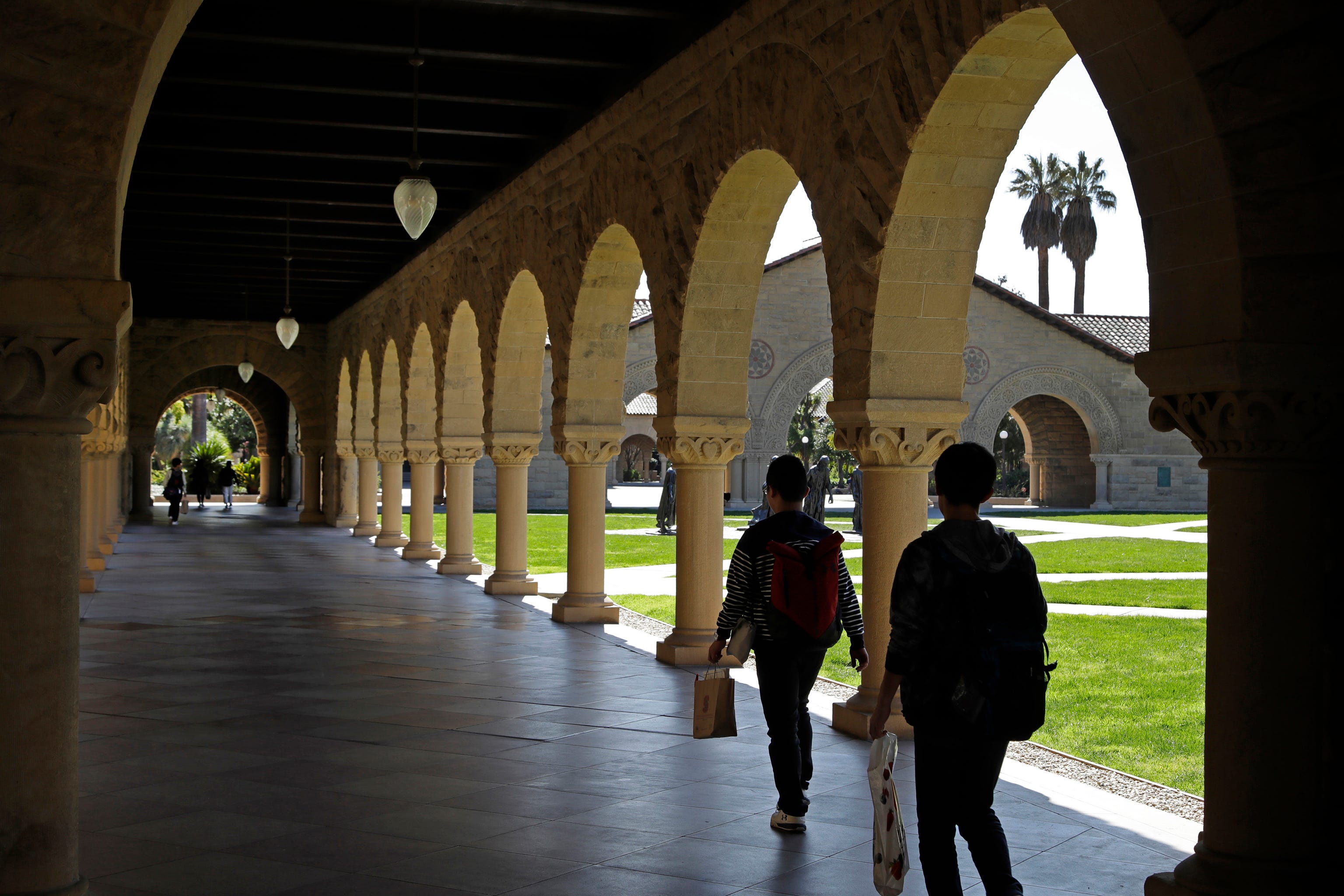 Pichai has said that moving to California was a huge leap.

“I always loved technology and while growing up I had dreams of Silicon Valley,” Pichai said in a 2014 interview at Delhi University. “I used to read about it, hear stories from my uncle.”

When Pichai got to America in 1993, he couldn’t believe how expensive everything was. He also missed his girlfriend, Anjali. The two eventually got married, and now have a son, Kiran, and daughter, Kavya. Pichai earned his MS from Stanford, and then attended the University of Pennsylvania’s Wharton School for his MBA. Before Google, he had stints at Applied Materials and consulting firm McKinsey & Co. Pichai interviewed at the Googleplex on April Fools’ Day in 2004 — the same day the company launched Gmail. Everyone, Pichai included, initially thought that the free email service was one of Google’s famous pranks. Pichai got his start working on Google’s search toolbar. But in 2006, Microsoft created a “Doomsday” scenario for Google by making Bing the new default search engine on Internet Explorer. Pichai helped convince computer manufacturers to preinstall the Toolbar on their hardware to mitigate the effect of this change. 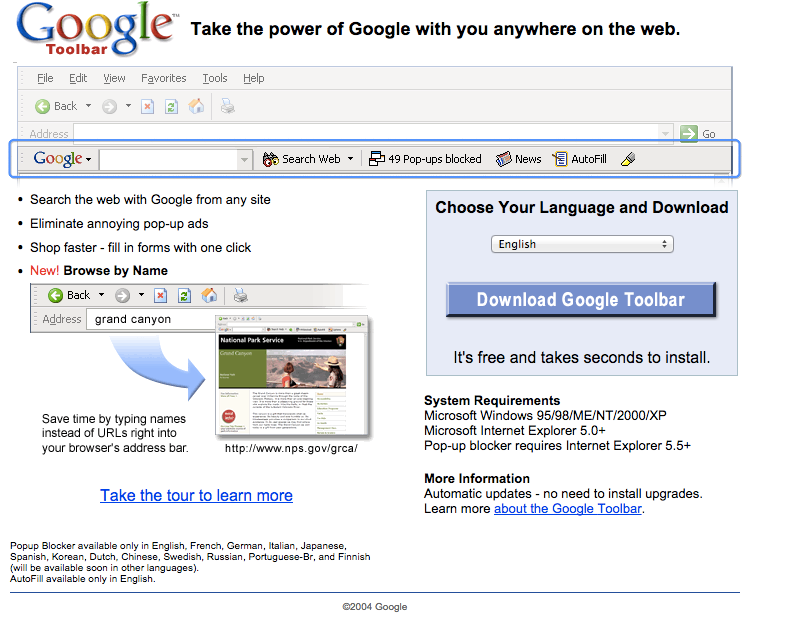 The Way Back MachineThe Toolbar site when Pichai started in 2004.

That Internet Explorer debacle led to another big early achievement for Pichai: convincing cofounders Larry Page and Sergey Brin to make Google build its own browser. The result, Chrome, is now the most-used option out there. 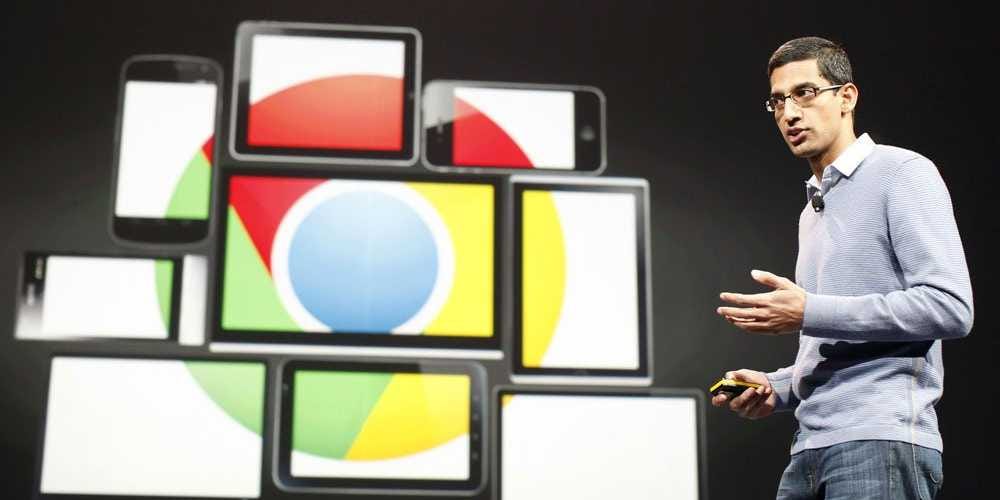 As a leader, Pichai was always well-liked and more focused on results instead of standing out. That “substance over overt style” attitude attracted attention, though, and he started getting more responsibility. Pichai then took over the Android division in 2013.

One of the major efforts he spearheaded was Android One, Google’s push to make low-cost smartphones for “the next 5 billion” people coming online.

Pichai was also incredibly instrumental in making sure Android was better integrated with Google proper. Before he took over, it was run basically as a completely separate business.

Another landmark in Pichai’s rise: He was reportedly instrumental in helping put together Google’s $US3.2 billion acquisition of Nest in 2014. 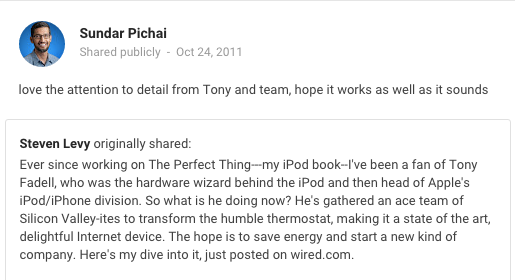 Pichai has remained a loyal Googler despite reportedly being approached by Twitter for high-ranking roles a couple of times.

We’ve been told that he would often act as Larry Page’s “interpreter” — understanding Page’s vision and then helping to communicate it to other teams.

That knack and his success with Chrome, Apps, and Android led to Pichai’s next important promotion in late 2014, when Page put him in charge of almost all of the company’s product areas, including search, maps, Google Plus, commerce and ads, and infrastructure. He essentially became Page’s second-in-command. Page respects Pichai. “Sundar has a tremendous ability to see what’s ahead and mobilize teams around the super important stuff,” he wrote in a memo announcing Pichai’s promotion. “We very much see eye-to-eye when it comes to product, which makes him the perfect fit for this role.” 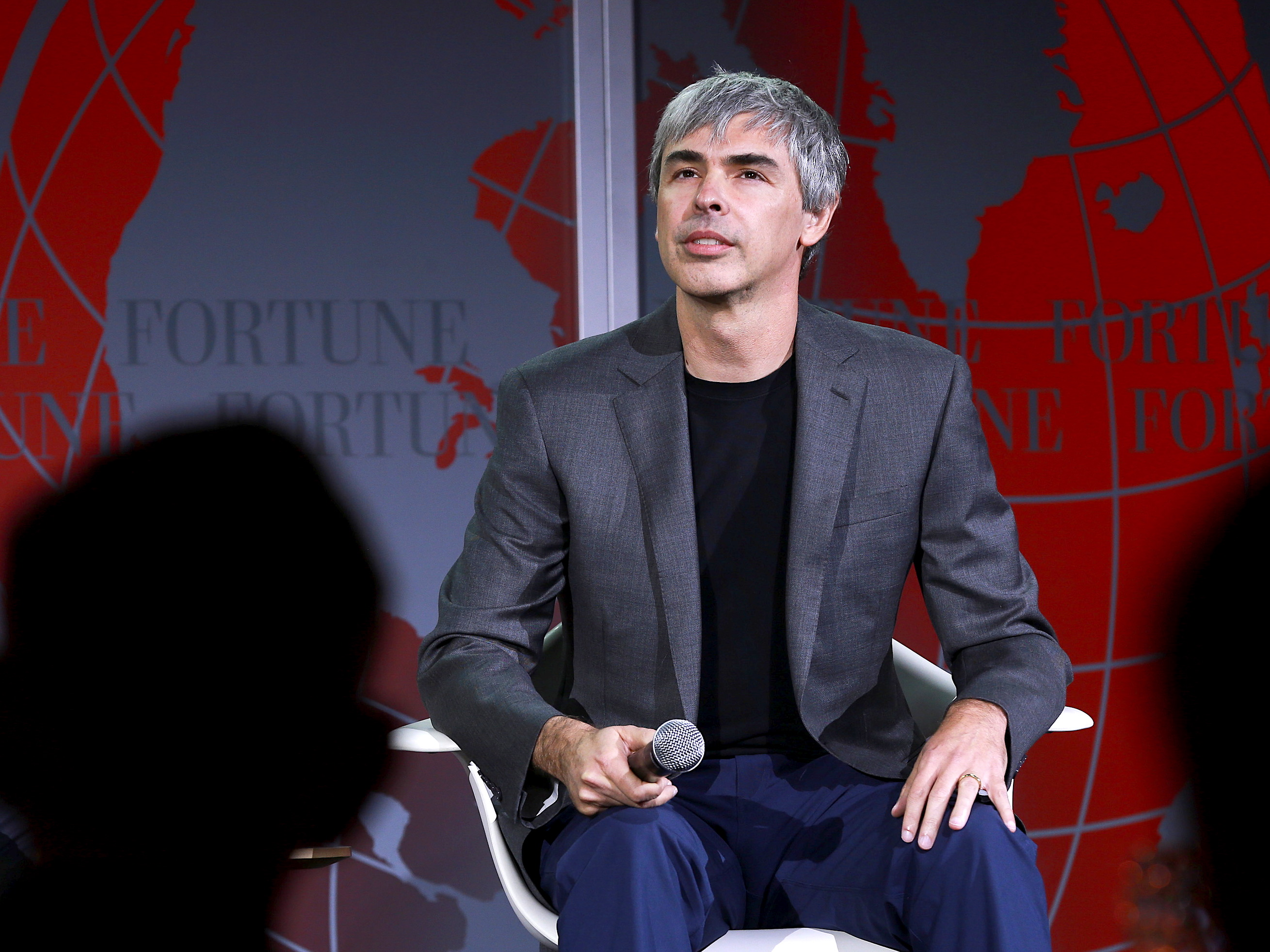 When the company blew up its corporate structure almost a year later, it was no surprise that Pichai got tapped to lead Google, since he was responsible for its core products. Although he’s private, Pichai is willing to speak out about certain causes that he believes in. Following some of President Donald Trump’s comments about immigration, he wrote a public post expressing his views: “Let’s not let fear defeat our values. We must support Muslim and other minority communities in the US and around the world.” Pichai is known to start his day with a cup of tea and an omelette — plus a copy of the Wall Street Journal. Pichai was always well-liked as a leader at Google as he rose through the ranks, and as CEO, his popularity soared. One Googler on Quora wrote, “He is literally worshipped inside Google. Engineers love him. Product Managers love him. Business people love him.” Pichai was one of the highest-rated CEOs on Glassdoor at one point — he received a 96% approval rating from respondents. These days, he’s No. 46 among all US CEOs. In July 2017, Pichai was named to Alphabet’s board of directors. “Sundar has been doing a great job as Google’s CEO, driving strong growth, partnerships, and tremendous product innovation. I really enjoy working with him and I’m excited that he is joining the Alphabet board,” Alphabet CEO Larry Page said at the time. In his home country, Pichai is seen as something of a hero. “You’ve done what everyone has dreamed of doing,” interviewer Harsha Bhogle said in a Q&A with Pichai for students at Delhi University. 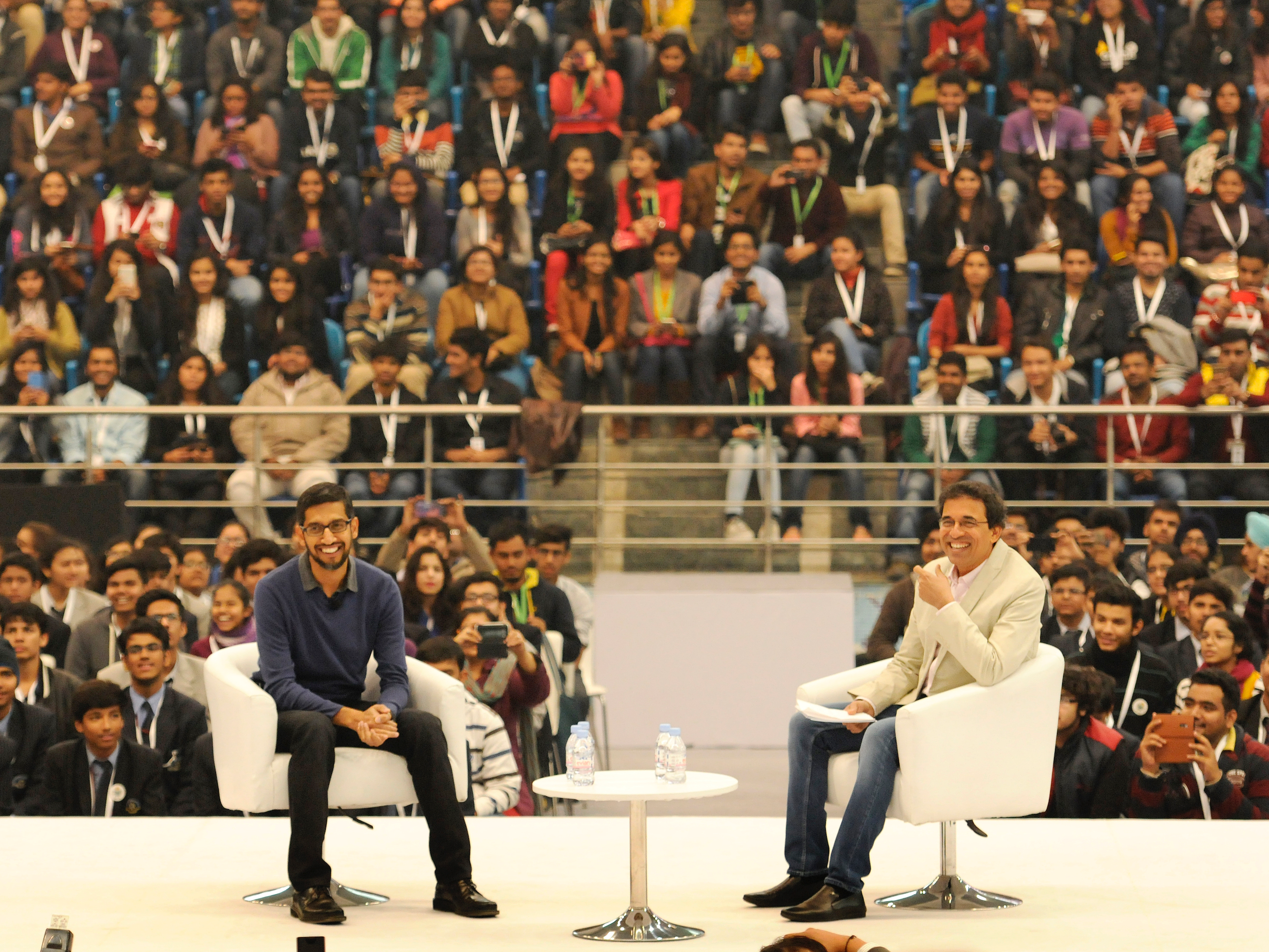 Throughout his meteoric rise, he’s remained incredibly humble: “It is always good to work with people who make you feel insecure about yourself. That way, you will constantly keep pushing your limits,” Pichai said in 2015. 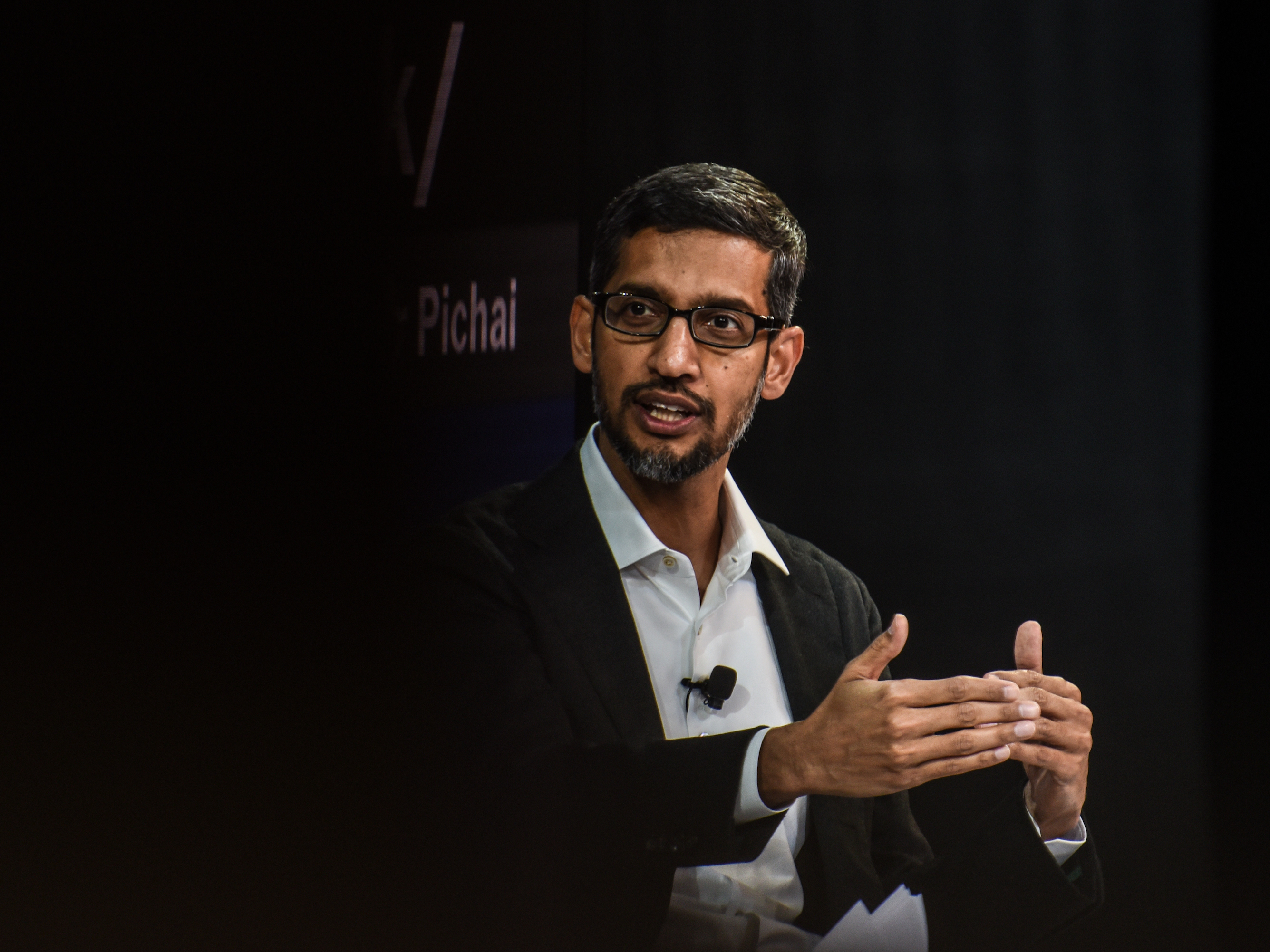 In December 2019, Alphabet’s CEO Larry Page and president Sergey Brin announced that were stepping down, and Pichai would become Alphabet CEO. Page and Brin cofounded Google in 1998. They announced the change in a letter saying that Alphabet and Google “no longer need two CEOs and a President.”

Pichai is now CEO of both Google and Alphabet.

He’s well-compensated for his work. Google said in an April regulatory filing that Pichai was awarded $US281 million in total compensation in 2019, mostly in stock awards. Pichai’s annual salary is $US650,000, though Google says it will rise to $US2 million in 2020. 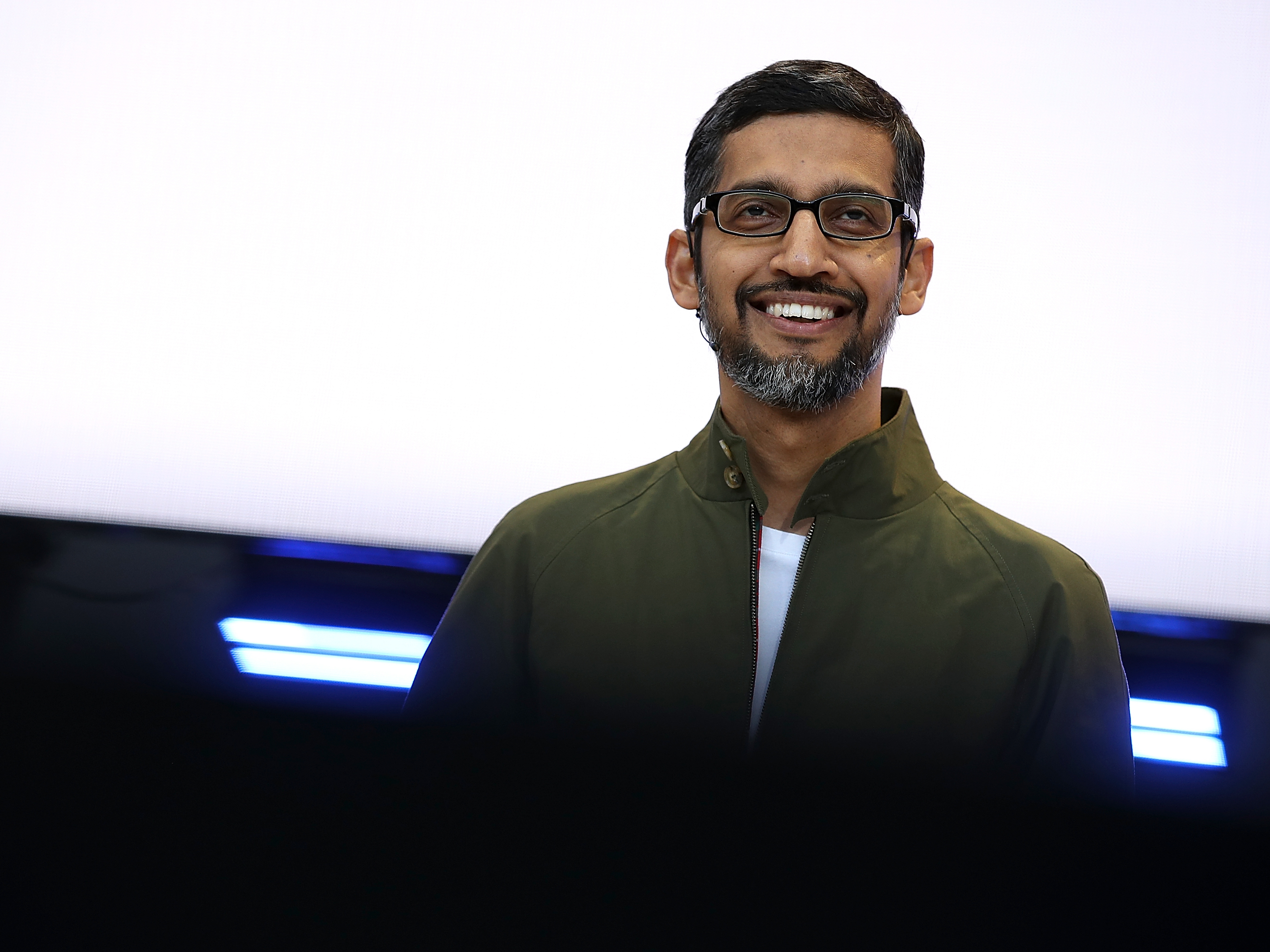