A version of this post appeared in “Insider Today,” a daily email written by Henry Blodget and David Plotz. To receive it in your inbox, please sign up here.

The US coronavirus response is a national disgrace

Germany, Italy, Spain, South Korea, Japan, the UK… all were hit hard by the coronavirus. And all have now reduced their new cases to a small and manageable number.

Meanwhile, after plateauing but never fully declining, cases in the United States have begun growing again.

Here, from Our World in Data, is a chart showing new confirmed cases per day per million people. Yes, confirmed cases are being boosted by increased testing. But testing capacity has increased everywhere. And still the US is an outlier. 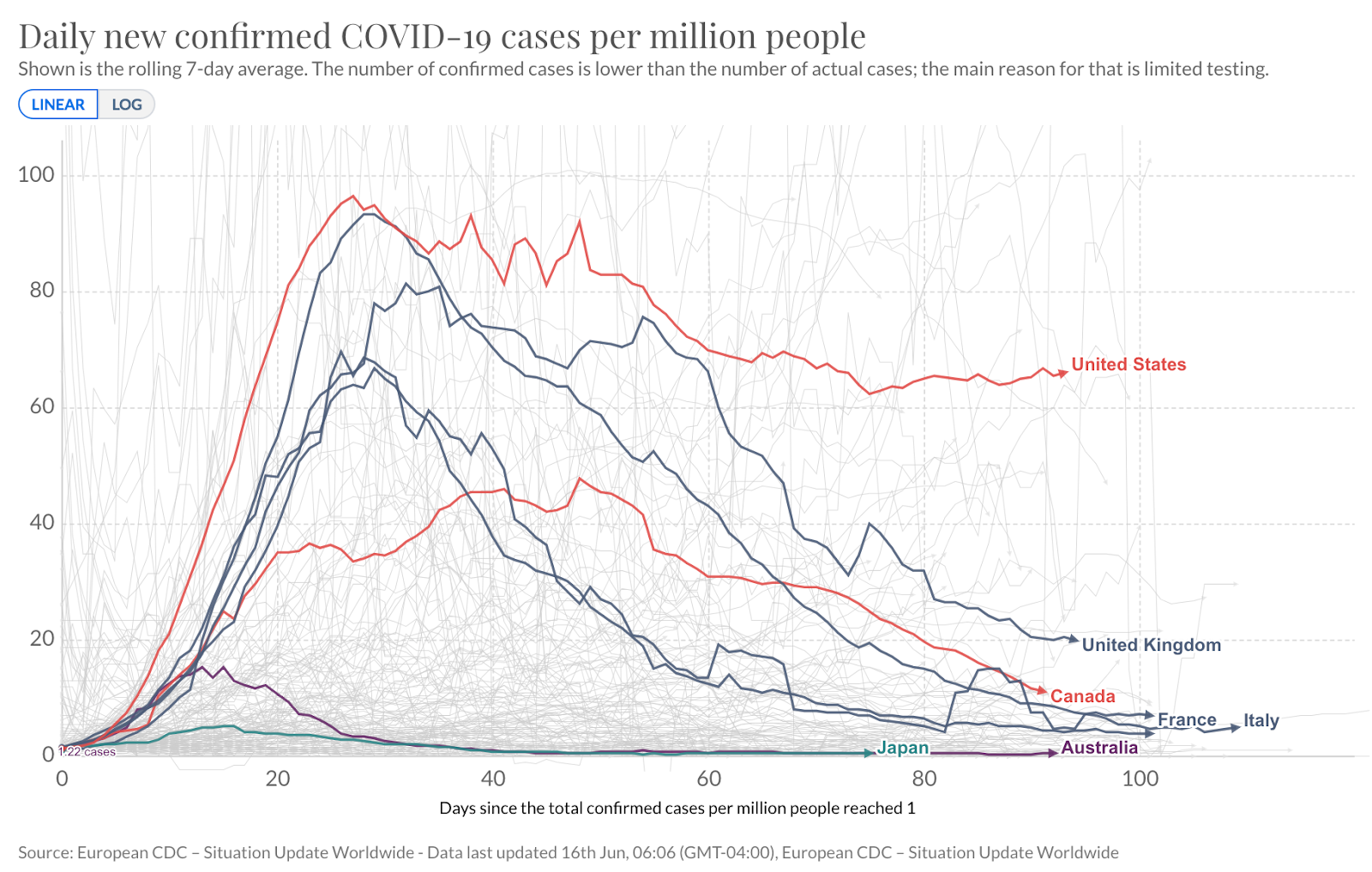 Nearly 120,000 Americans have died from the coronavirus, and about 750 are still dying every day. Meanwhile, our president is just saying more stupid things (“If we stop testing, we’d have very few cases”) and pretending the problem no longer exists.

But you cannot deny that the US has royally screwed this up and that we’ll be paying for our incompetence for months if not years.

The US coronavirus response is a national disgrace. – HB

Finally, a coronavirus drug that appears to help! 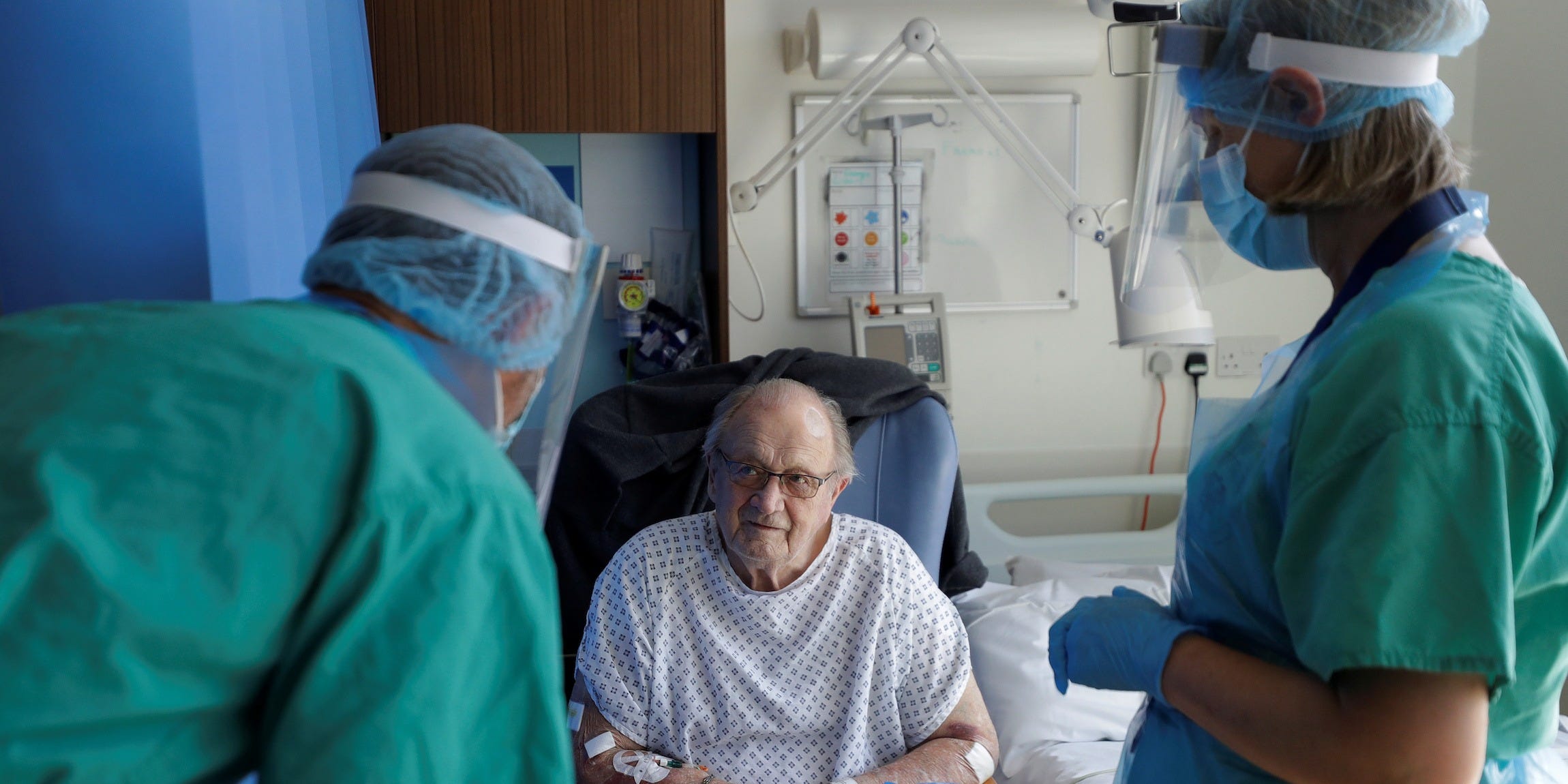 Kirsty Wigglesworth/ReutersCoronavirus patient George Gilbert, 85 who is part of a drug trial, is treated at Addenbrooke’s hospital in Cambridge, Britain May 21, 2020.

A big drug trial in the UK has concluded that a cheap, widely available steroid called Dexamethasone helps reduce the percentage of seriously ill coronavirus patients who die from the disease.

The drug appears to reduce the impact of “cytokine storms,” a part of the body’s immune response that occasionally goes too far and kills people.

In the study, the drug reduced the death rate of patients on ventilators from 40% to 28% and of patients needing oxygen from 25% to 20%.

Unlike many early tests of potential coronavirus drugs, the UK trial was a robust “randomised control trial.” Its results, therefore, are more likely to withstand scrutiny and additional tests. As Dr. Atul Gawande pointed out this morning, however, the UK findings were revealed via a press release, not a full study write-up, so it’s too early to celebrate.

In light of the tragically weak US response to the coronavirus, one of the few remaining hopes has been a fast vaccine or therapy. Dexamethasone does not appear to be a miracle cure. But if the findings of the UK test hold up, it will help. – HB 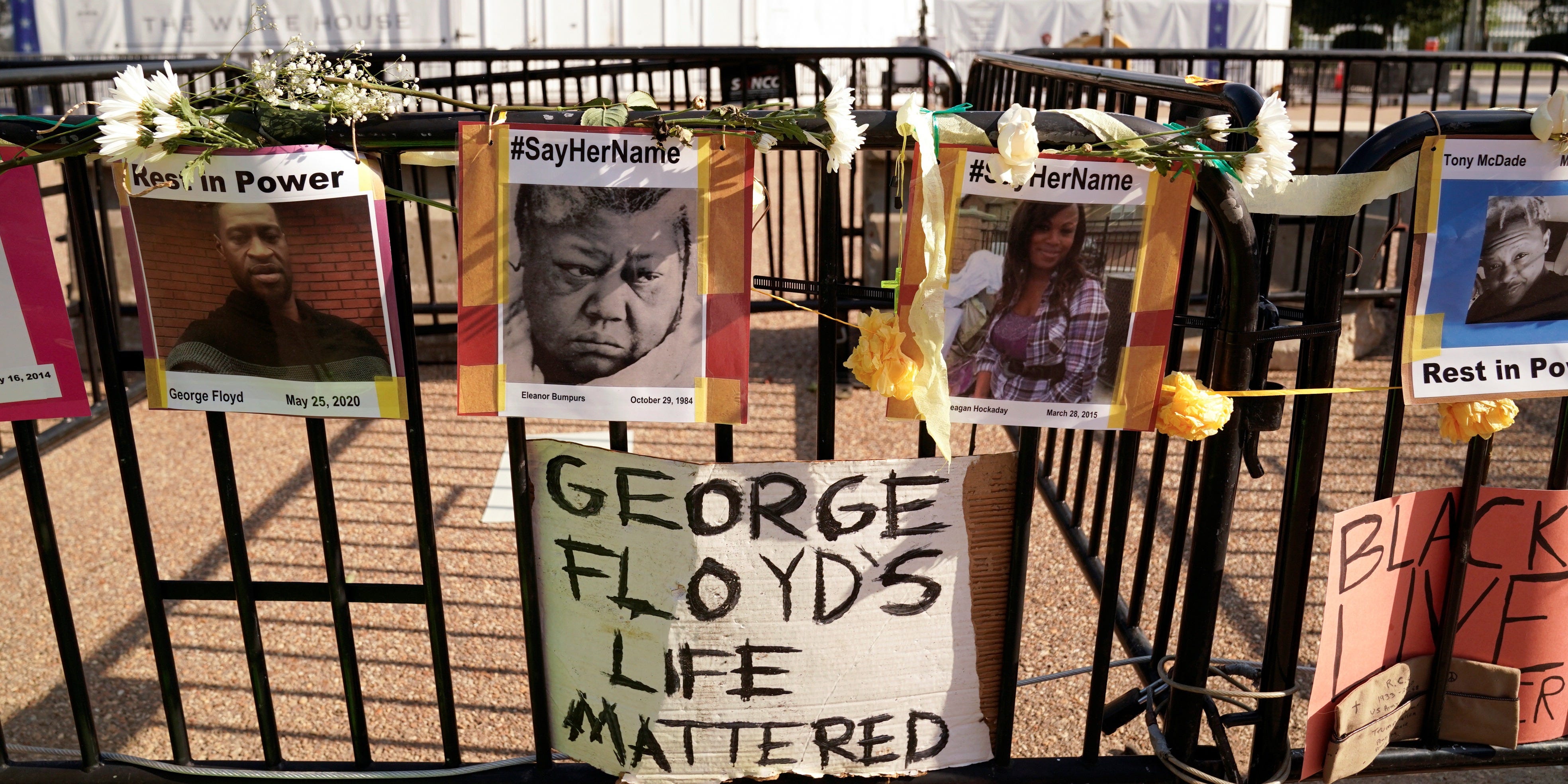 Erin Scott/ReutersA makeshift memorial is pictured on the fence in front of the White House during a demonstration against racial inequality in the aftermath of the death in Minneapolis police custody of George Floyd, in Washington, U.S., June 14, 2020. REUTERS/Erin Scott

The George Floyd protest movement has branched into at least five different movements, all related but each pursuing its own goals.

The first and most important movement is the fast-moving, highly contentious local effort to radically reform police departments. Defund the Police is a rallying cry, but this is highly varied campaign varying city by city depending on local activists, politicians, and police officials. In Minneapolis, the City Council seems serious about dismantling and rebuilding law enforcement. Seattle has the police-free Capitol Hill Autonomous Zone. San Francisco will stop sending officers to respond to non-criminal matters, instead dispatching health professionals and social workers. Every city is different, and each battle will be fought locally.

The local movement is much more significant than the reform movement taking shape in Washington. National politicians have glommed onto the Floyd protests, some because they are true believers, and others because they’re scared. Democrats are pushing changes to federal laws that are radical by the standards of two months ago – banning choke holds – but fairly weak tea compared to local efforts. The president and Senate Republicans aren’t even offering tea, just lukewarm water in the form of quite limited reforms. Partisan dynamics ensure that the Democrats’ most ambitious reforms will fail. So don’t pay attention to Washington, which will make a lot of noise and accomplish little.

The third movement is the continuing, anguished protest aboutspecificacts of violence against Blacks. The police killing of Rayshard Brooks is inspiring huge demonstrations in Atlanta, and ousted the police chief. Protests over the mysterious hanging death of Robert Fuller have prompted an FBI investigation. These demonstrations, which focus on seeking justice in particular cases, are emotionally powerful. As we saw in the case of Floyd’s death, these protests about individual cases can become the fuel that motivates protesters to seek broader reforms.

The fourth movement is the widespread fight over statues, symbols, and names. Spun out of the Floyd protests, these symbolic battles have taken on a life of their own. In New Mexico, they have toppled statues of Spanish conquistador Juan de Oñate and produced conflict with armed counterprotesters. In Virginia, the Stonewall Manor neighbourhood split when college students proposed taking Stonewall Jackson’s name and image off it. Richmond is seething over the Robert E. Lee statue that lords over the city, and a judge’s delay in removing it. The argument over Army bases named after Confederate generals, the banning of the Confederate flag at Nascar events, the defacing of statues of colonialist brutes – these are part of the same movement. It’s a long overdue reckoning with American history.

The fifth movement is the battle within workplaces about inequality and systemic racism. The media industry, for example, has convulsed over the past few weeks as staffers surfaced longstanding complaints about the toxic culture at places like Bon Appetit and Refinery 29. Hollywood and the food industry are erupting in similar ways. The Floyd protests drew attention to systemic racism, and that has emboldened workers to speak up about wrongs in their industry.

In all these cases, the Floyd protests were the spark, but each of these movements will flow at its own pace and achieve its own ends. – DP


If you’re enjoying this story, sign up now for the Insider Today newsletter, to receive more of these insights from Henry Blodget and David Plotz

The Director and Deputy Director of Voice of America resigned on Monday, following the senate confirmation of Trump ally Michael Pack as CEO of US Agency for Global Media, which encompasses VOA and four smaller U.S. government broadcasters.

VOA is an odd beast: It was created to provide trustworthy news from an American perspective to an international audience, many living in countries without an independent media. And that’s what it’s done for 75 years, often under the leadership of great journalists such as departing director Amanda Bennett, a brilliant newspaper editor and Pulitzer winner. The Trump administration accused Bennett’s VOA of spinning stories in China’s favour and clearly wants to remake the agency.

Pack, who makes conservative-tilting documentary films, is a Steve Bannon acolyte. Given Bennett’s departure, Trump’s record, and Pack’s history, there are fears that VOA’s mission will be twisted, and it will spew Trumpish propaganda rather than report the news. According to one report, Sebastian Gorka is already being considered for a seat on the USAGM board.

What we’ve learned agonizingly during the Trump years is that you can break in minutes something that took generations to build. Decades of steady work has made VOA trusted worldwide. In the wrong hands, that reputation could collapse in months. – DP

Fine – dump the SAT. But replace it with a really hard test. 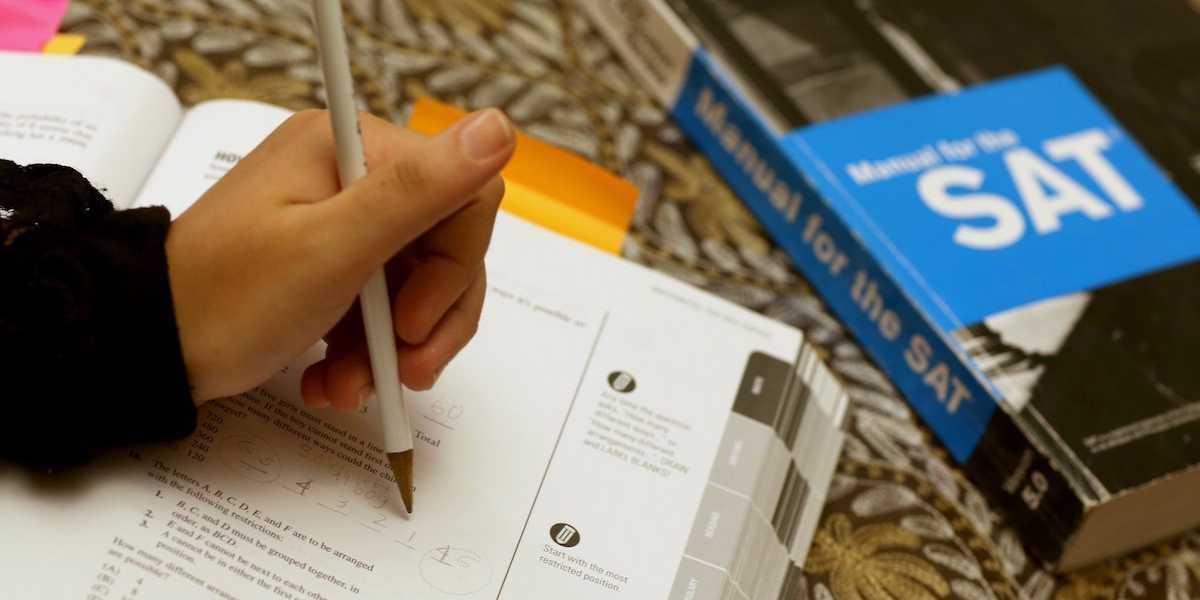 Harvard won’t require the SAT or the ACT for applicants next year, joining the rest of the Ivy League and more than half of American colleges and universities in dropping the standardised test prerequisite. This is no tragedy.

The SAT and ACT indicate nothing (or at best extremely little) about how well students perform in college. And like so much else in the college admissions grind, they’re gamed by rich people, who pay for score-boosting tutors. Many of the schools dropping the tests next year will never reinstate them, because they will discover no meaningful difference between the class of 2025 and previous classes.

So don’t mourn the loss of the ACT and SAT.

But do mourn the high school test we don’t have. As this brilliant book points out, all the best high school systems in the world build up to a gruelling, challenging final exam. Not an insipid SAT, but a truly demanding test of everything kids have learned.

The US lacks a national curriculum or even national standards, instead limping by with a mess of state guidance and local school districts. One result: American schools are way too easy. American kids would be better prepared for the global economy and more productive citizens if we worked them harder in high school, held them all to the same standards, and forced them to take a brutal final exam to graduate. – DP

Is Liberty the most important American university? 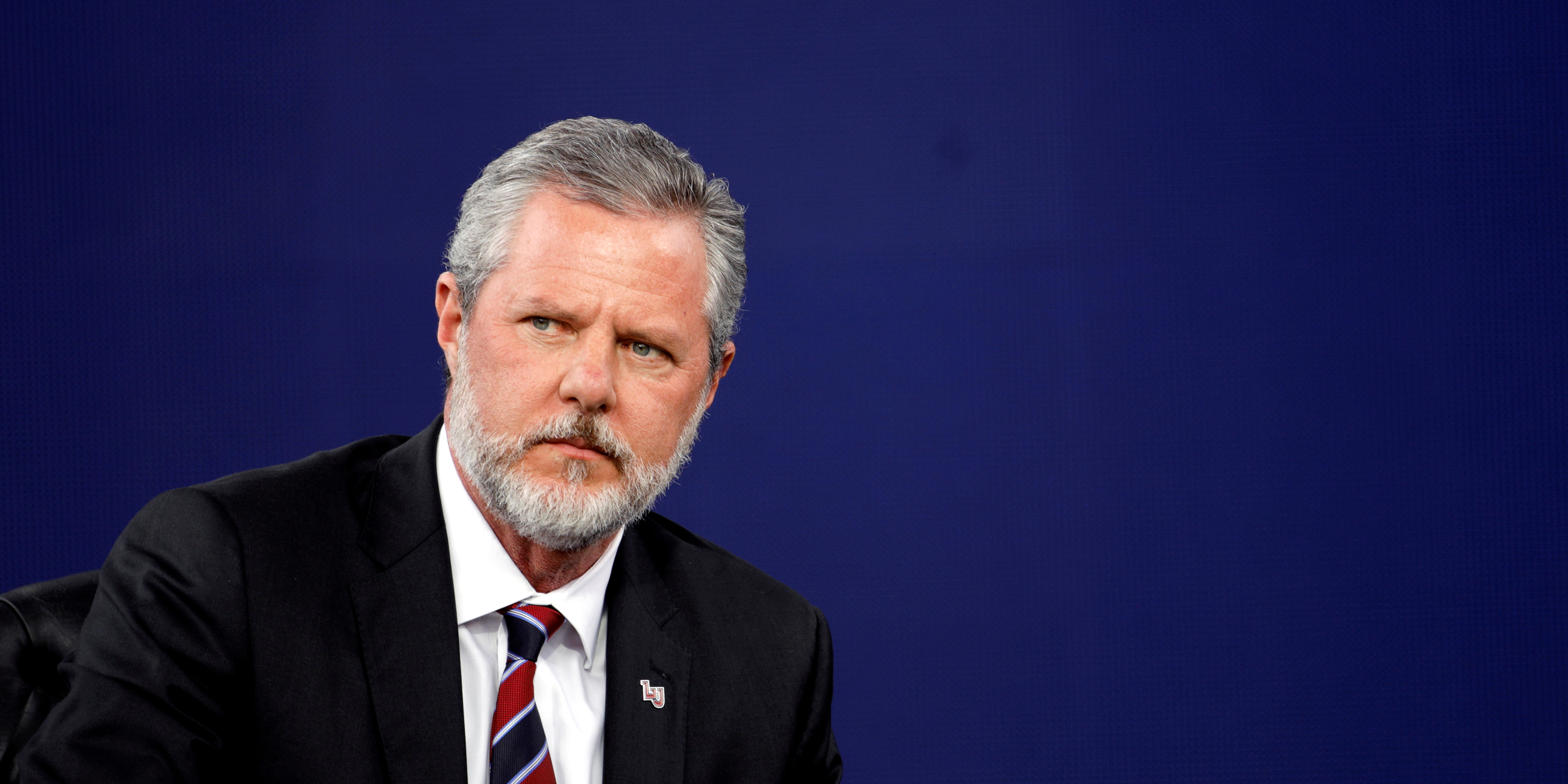 The story of Saturday’s Republican congressional primary in Virginia’s 5th district is bonkers, but comes down to: Very conservative incumbent Denver Riggleman officiated at a gay wedding, got primaried by an even-more-conservative evangelical Christian, and lost in a weird drive-through vote.

The primary is also fascinating because it represents the continued ascendance of Liberty University in Republican politics. Bob Good, who won the primary, is a former athletic official at Liberty, the school founded by Jerry Falwell and now run by his son Jerry Falwell Jr.

Several conservative Christian colleges have dabbled around politics over the past 20 years, including Patrick Henry, The King’s College, and Bob Jones, Liberty now prevails, largely because Falwell Jr. has so masterfully aligned himself with Trump. Early on, Falwell Jr. made the compromise that many conservative evangelicals have come to, that Trump’s personal morality is irrelevant because he champions evangelical issues. On Israel, Charlottesville, and reopening, Falwell Jr. ends up articulating Trump’s positions more aggressively than even the president does, which has made him a beloved ally of the president and made Liberty the preeminent university of Trumpist evangelicals.

Falwell Jr. had endorsed Riggleman in the primary because he would have had an easier run in the general election. But he’ll quickly align himself with Good, whose ascendance is another step up for Liberty. – DP