The Eurozone Economy Is Turning The Corner

The take-up of the ECB’s TLTRO program announced back in June was materially lower than expected. About €83bn worth of cheap long-dated loans was picked up by the area’s banking system. Many had expected €150bn and even greater. Part of the reason is that banks that are not quite ready to deploy the funds don’t want to sit on cash with negative rates. As a result some have concluded that the Eurozone’s credit contraction will worsen from here and economic conditions will deteriorate further.

As views of doom and gloom envelop the Eurozone, it may be time time for a contrarian view: the euro area’s economy is turning the corner. Yes, it’s difficult to imagine such a thing and we are sure to get numerous angry emails and comments. Ultimately it’s about the data.First of all we start with the Eurozone’s inflation expectations which continue to fall. That combined with a weaker than expected TLTRO take-up will keep the ECB highly active in its easing efforts, potentially even considering QE. It’s important to keep in mind that the ECB is trying to replace at least in part the 3yr LTRO and MRO loans that banks have been repaying. These repayments have resulted in an unprecedented reduction in the central bank (Eurosystem) balance sheet since the beginning of last year. Without a strong take-up in the TLTRO, the ECB will consider other options to expand the balance sheet. The planned ABS purchases will hardly make a dent because the new Basel Accord has all but destroyed that market. Therefore there will be pressure on the ECB to do something else in order to stem the decline in its balance sheet. Plus we are already seeing EU institutions calling on the BIS to loosen regulatory capital rules for structured credit issuance. All of this is positive for the Eurozone banks and will likely expand liquidity in the system. That’s in part why we’ve had a nice pop in euro area bank shares recently.

Interestingly, a number of analysts have been pointing out that the Eurozone bank deleveraging is over. Credit contraction in the area is ending. One can see glimpses of this in the area’s money supply measures which have stabilised recently. 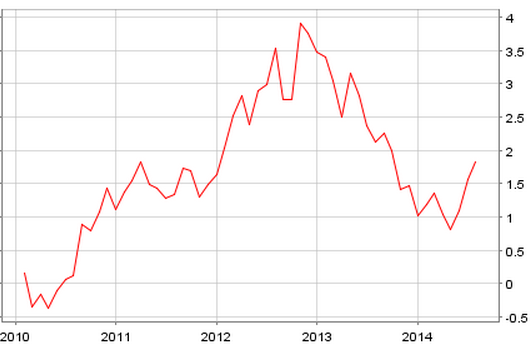 To some extent Mario Draghi has already generated some degree of stimulus for the area’s economy by repricing the euro (via negative domestic deposit rates). This is a gift for German and other exporters who can now more effectively compete on the international markets. We may already be witnessing the impact of weaker euro, as German trade balance jumped recently, resulting in better than expected German industrial production report. Improved German exports (see chart) combined with several other factors have resulted in higher than expected growth in industrial production for the Eurozone as a whole. There is no question that the Eurozone’s economy continues to struggle. Issues such as the recession in Italy, manufacturing stagnation in France, and massive unemployment across the area are not going away anytime soon. China’s economy and the situation in Ukraine continue to pose risks. Surveys still show worsening business and consumer sentiment. But the expectations around the area’s performance have been so bad lately, surprises to the upside are increasingly likely (see example). The ECB’s aggressive easing stance as well as stronger trade and industrial activity data tell us that for now the worst of the euro area slowdown may be over.