I made stuffing using 3 recipes from celebrity chefs, and the best was also the easiest to make 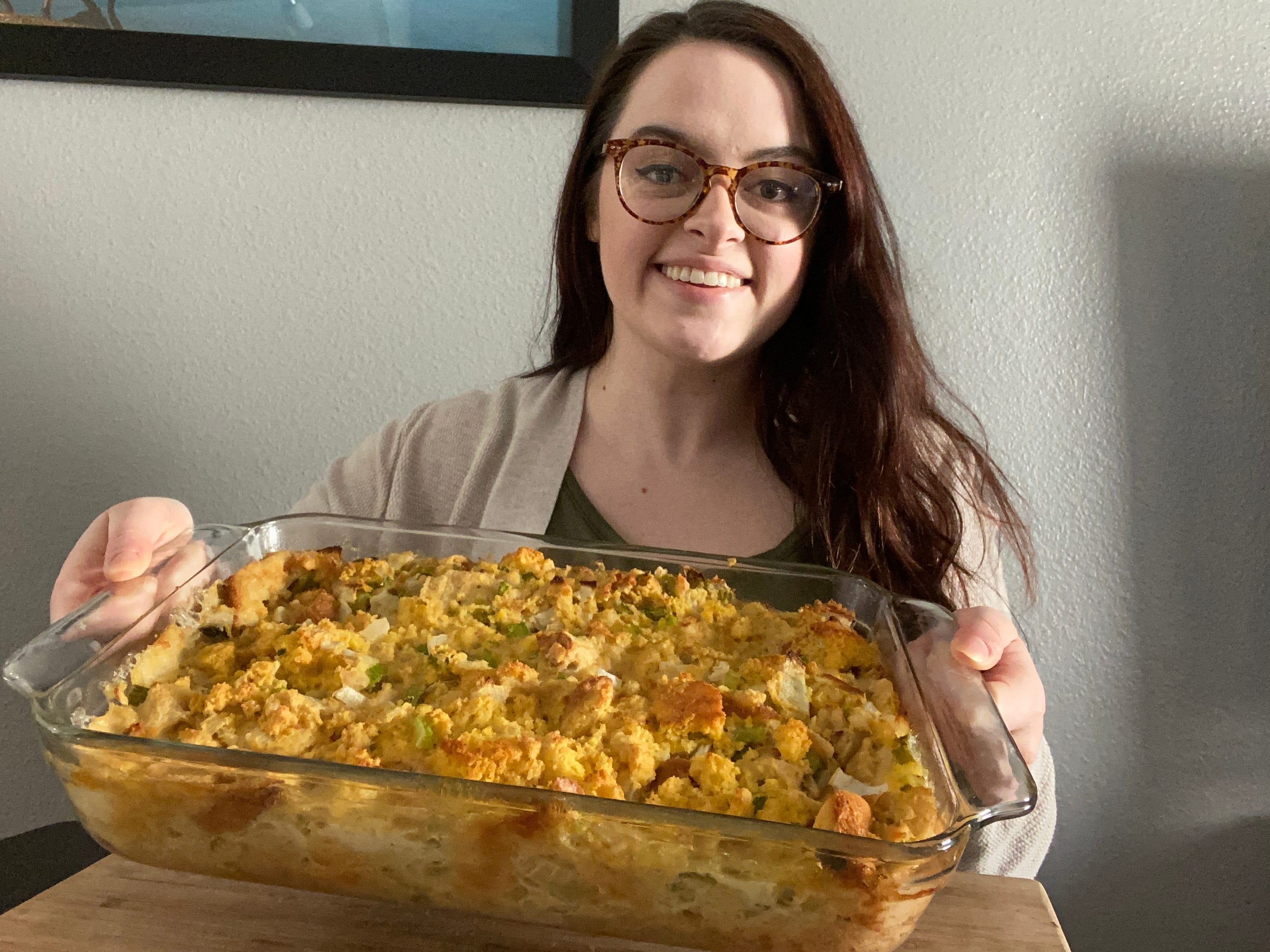 With Thanksgiving just around the corner, it’s time to start thinking about which dishes to include on this year’s table.

For many menus, stuffing is a must, but the countless recipes and techniques can make this Turkey Day staple feel overwhelming. Although you can opt for a boxed alternative, there’s something special about making this side dish from scratch.

Read on to find out how the stuffings stacked up. 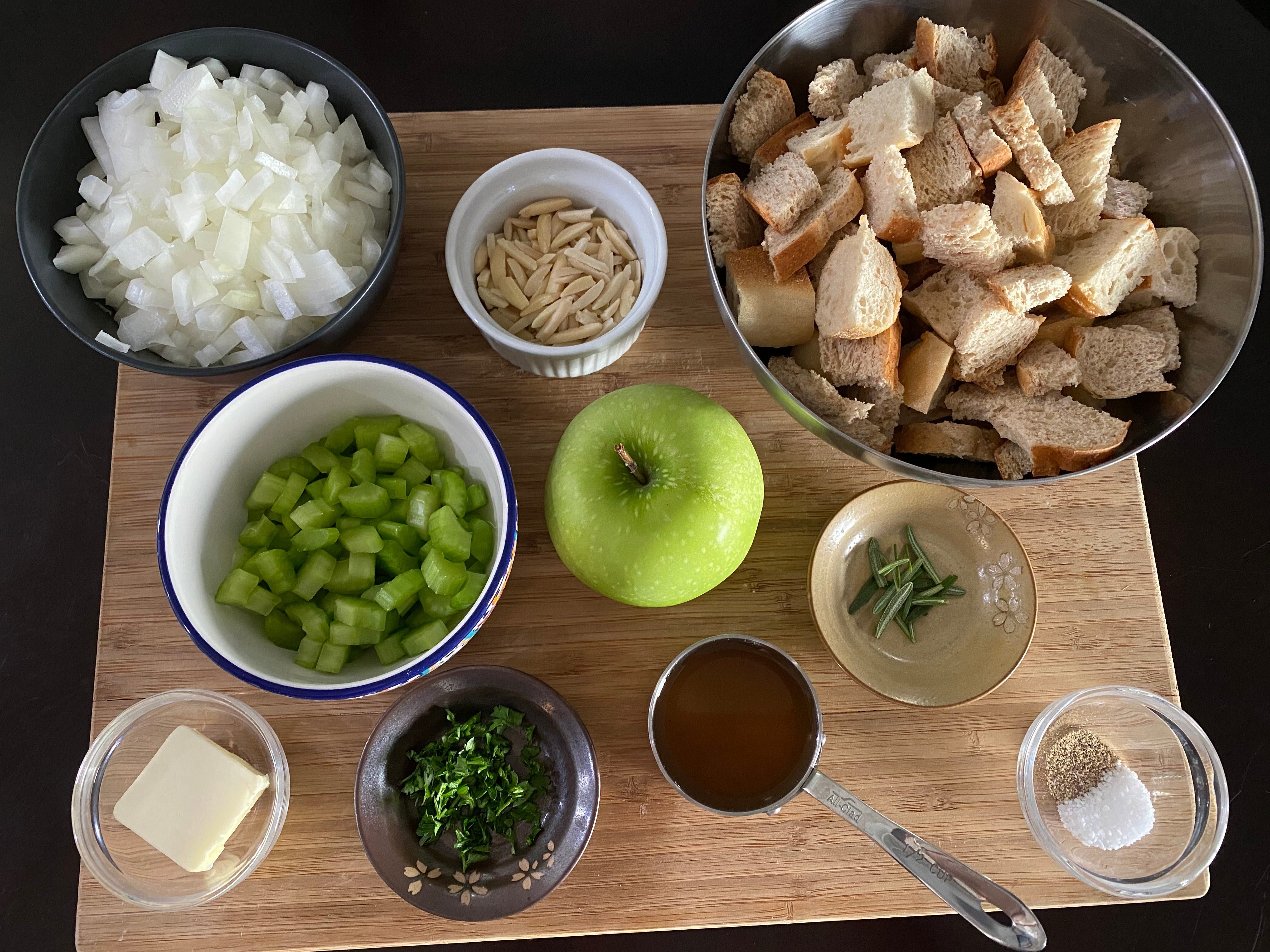 Unlike the other recipes I tested, Garten’s required only one type of bread, baguettes, which made it easier to prepare. I also appreciated the addition of fresh herbs but was unsure how I’d like the apples and almonds combined with the savoury onions and celery.

This recipe yielded a huge portion, so I chose to cut it in half.

This stuffing was quite easy to make 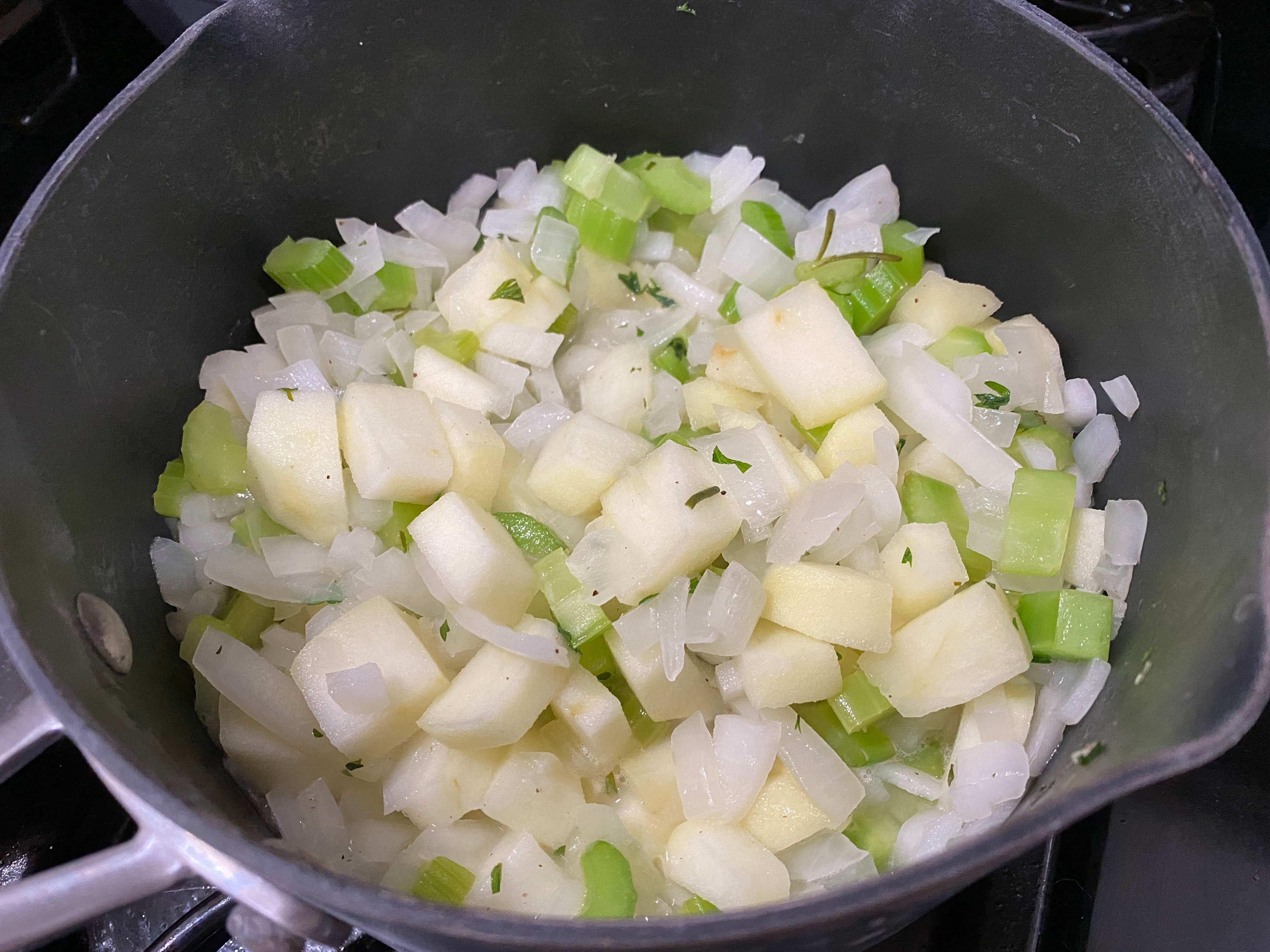 Paige Bennett for InsiderI cooked the onions and celery while the bread dried in the oven.

Overall, the process was pretty simple.

While drying the bread in the oven at 300 degrees Fahrenheit for about 10 minutes, I sautÃ©ed the veggies, apples, and herbs in a saucepan with butter.

Once the mixture was combined, I poured it and the vegetable stock over the bread cubes. 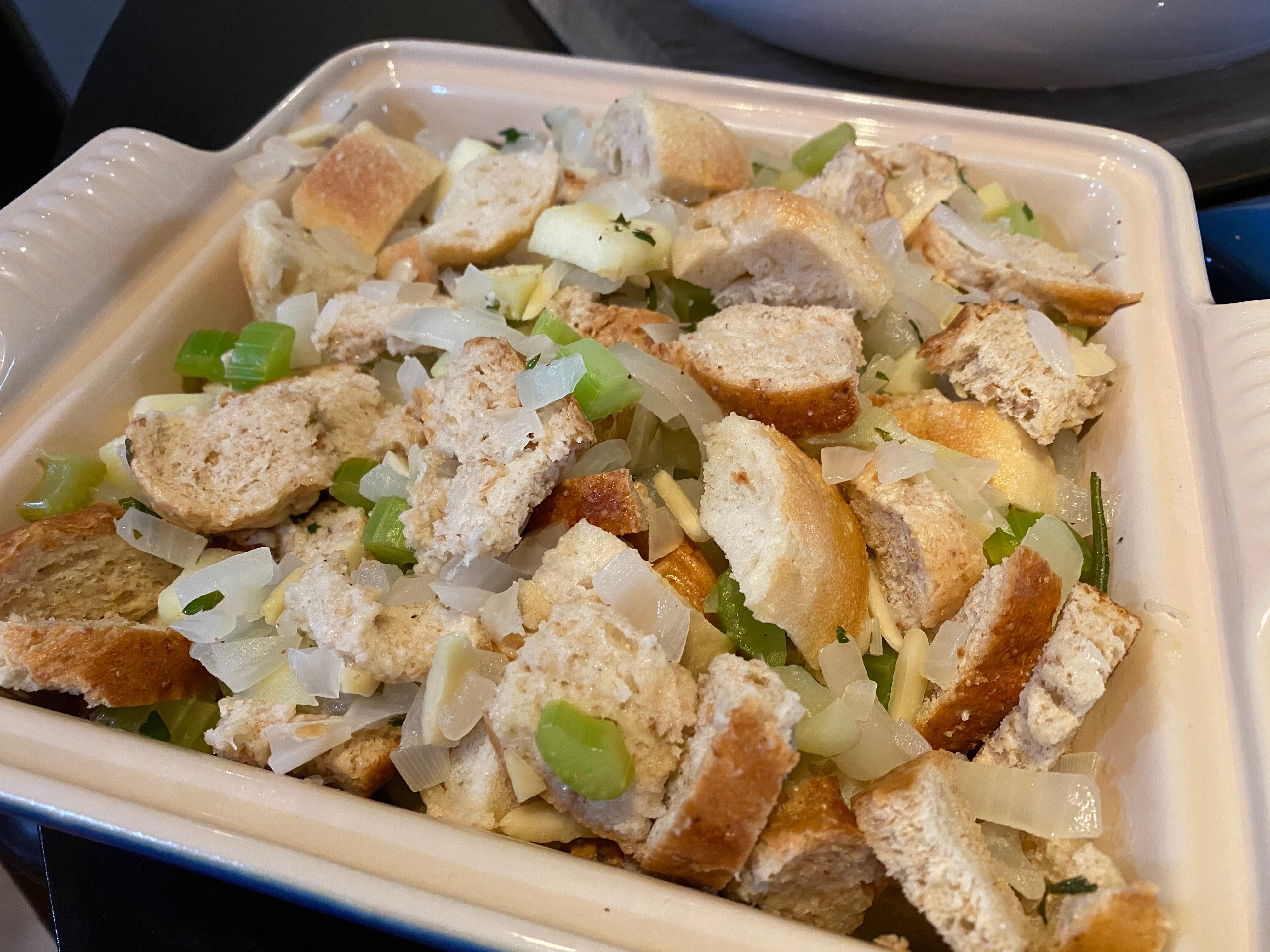 Paige Bennett for InsiderThe mixture was easy to combine.

This recipe calls for cooking the filling inside a turkey cavity for two and a half hours at 350 degrees Fahrenheit â€” however, I wasn’t making a turkey for this taste test, so I baked the stuffing at the same temperature in a shallow dish for an hour instead.

The longest part of the process was cooking the onions, celery, and apples, but even that only took about 10 minutes.

I ended up enjoying the addition of the apples, but the almonds â€¦ not so much 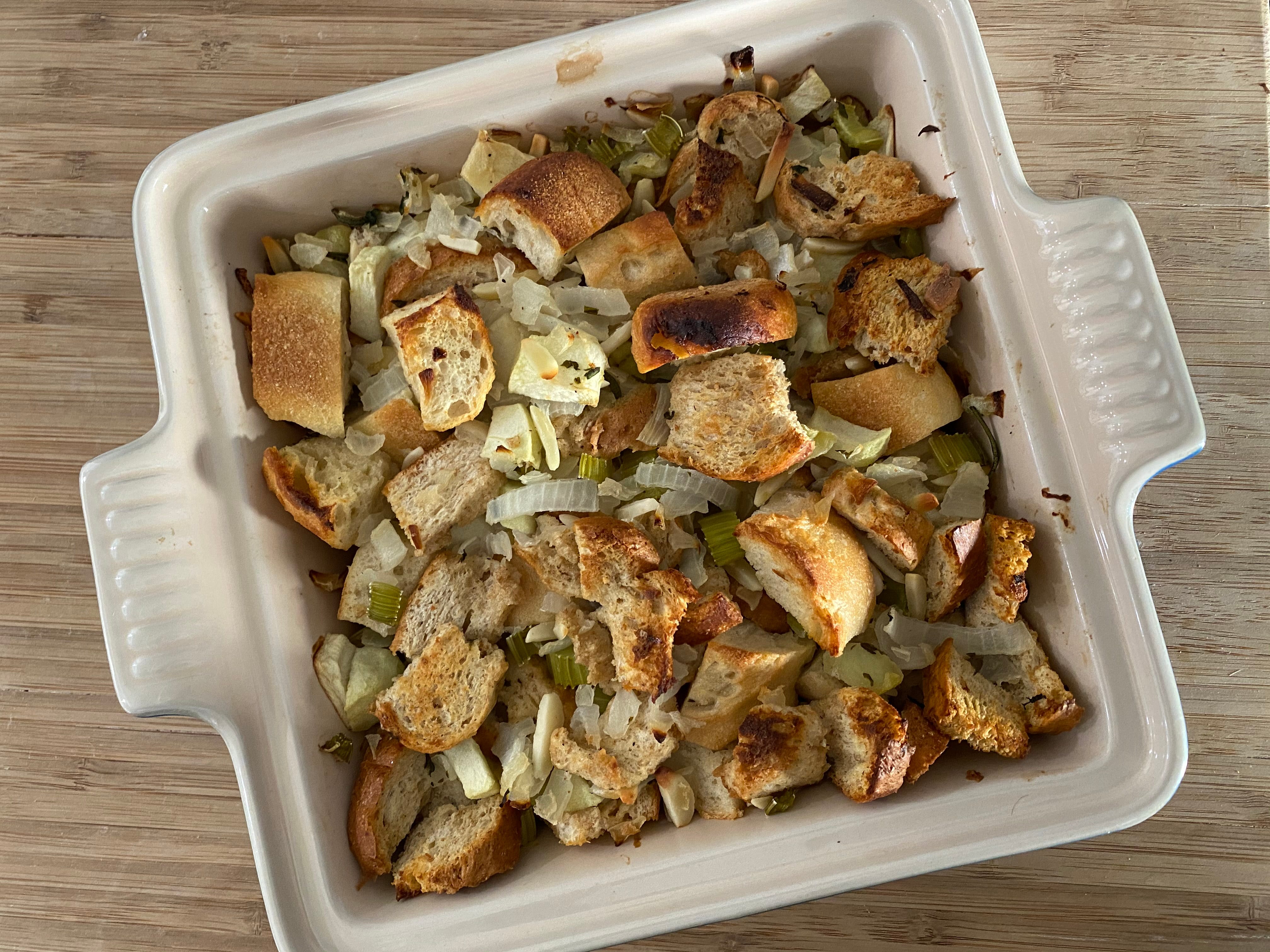 The final dish looked pretty crispy and golden on top, but when I scooped a serving out of the pan, its centre looked less appetizing.

The texture was ok â€” the insides were definitely soggy, but not terrible. Adding a little less broth would likely solve this. 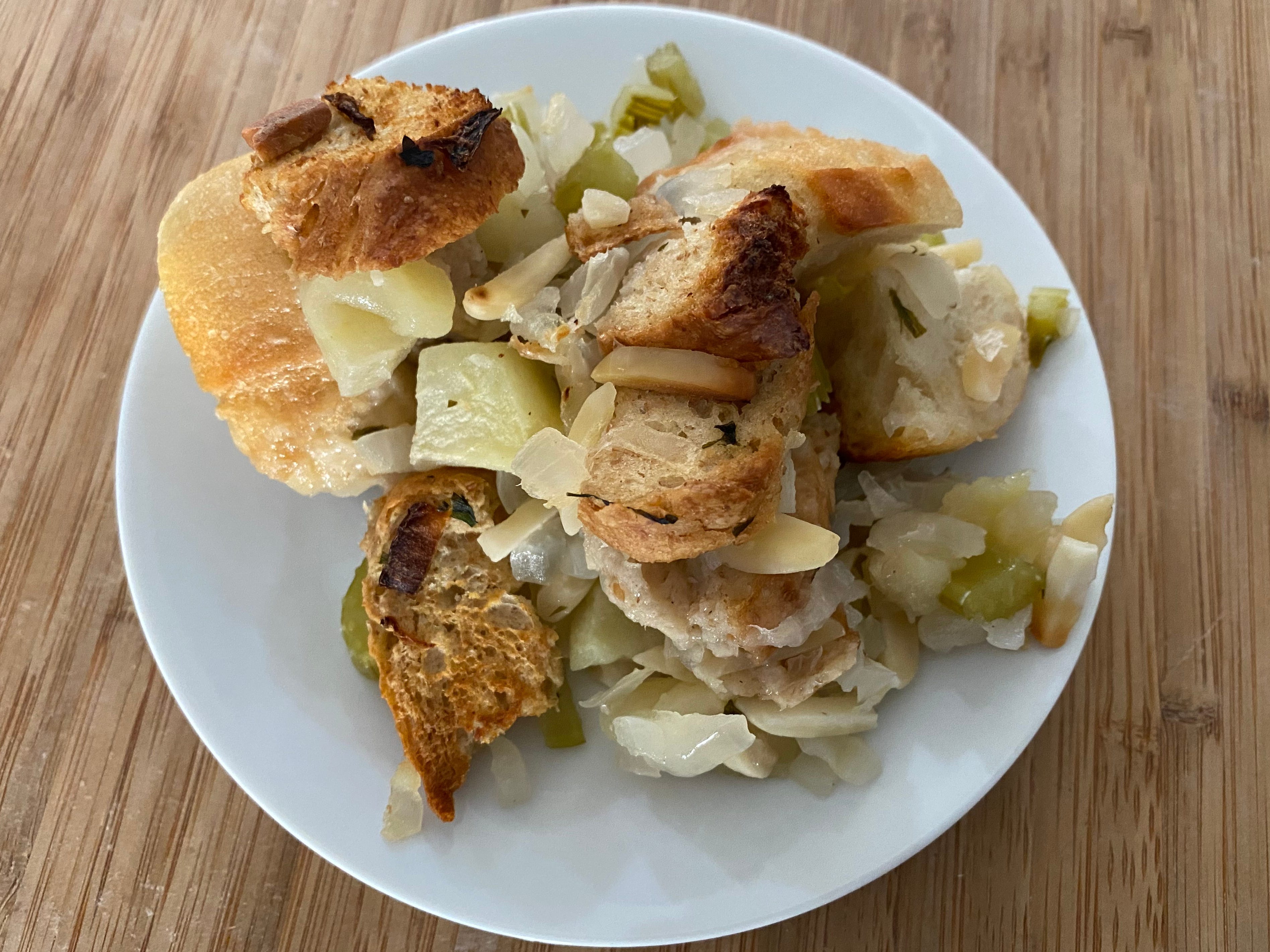 Paige Bennett for InsiderI served myself a portion of Ina Garten’s stuffing.

Next time, I would definitely omit the nuts. I used slivered almonds, and between their crunchiness, size, and shape, they threw off the dish’s overall texture for me.

The crusty breaded exterior was delicious and added all of the crunch this dish needed.

I could definitely taste the rosemary, and I actually enjoyed the apples, which gave the stuffing a slight sweetness that balanced the other savoury flavours. 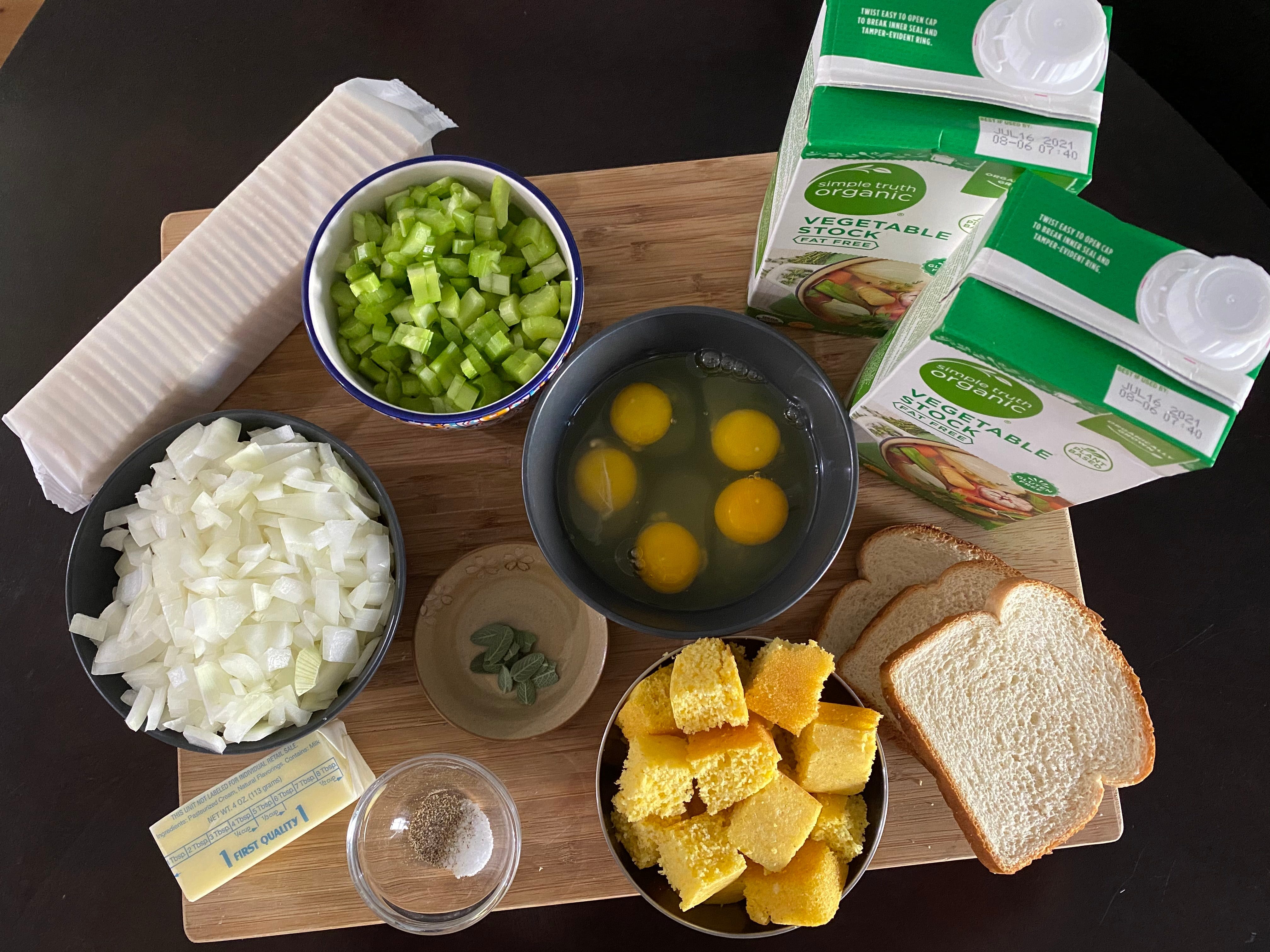 In true Deen fashion, this stuffing called for a full stick of butter.

I was also unsure about the mixture of carbs here â€” saltine crackers, white bread, and cornbread, which I made from scratch using Deen’s recipe.

My stuffing mix ended up with too much broth, some of which I had to carefully pour out before baking 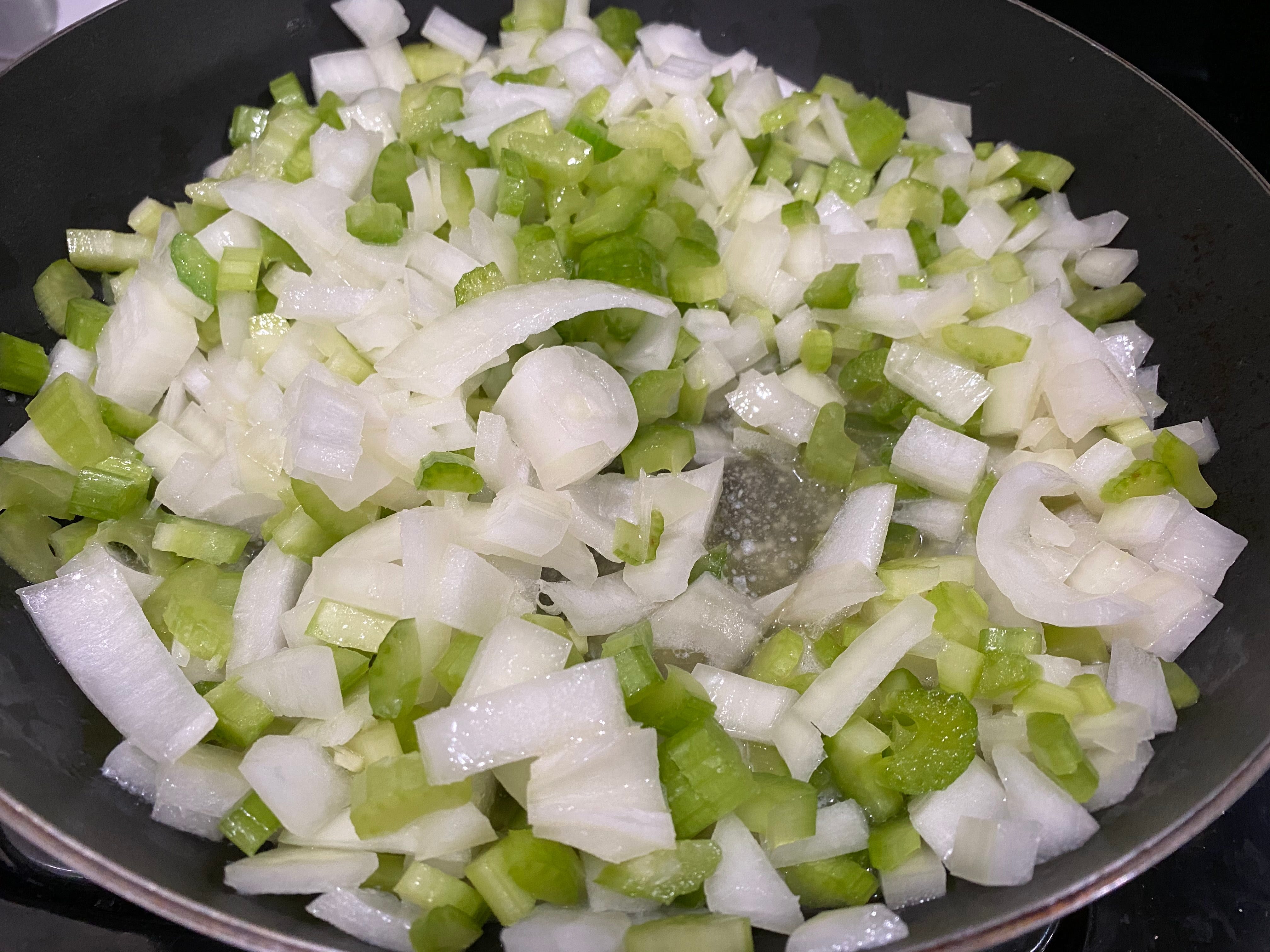 Paige Bennett for InsiderI sautéed the onions and celery.

For the carbs, I started by making the cornbread â€” which was a quick and easy process that resulted in a savoury, slightly dense dish â€” and dried the white bread slices in the oven.

I then sautÃ©ed the veggies with the stick of butter and mixed all of the prepared ingredients in a bowl. 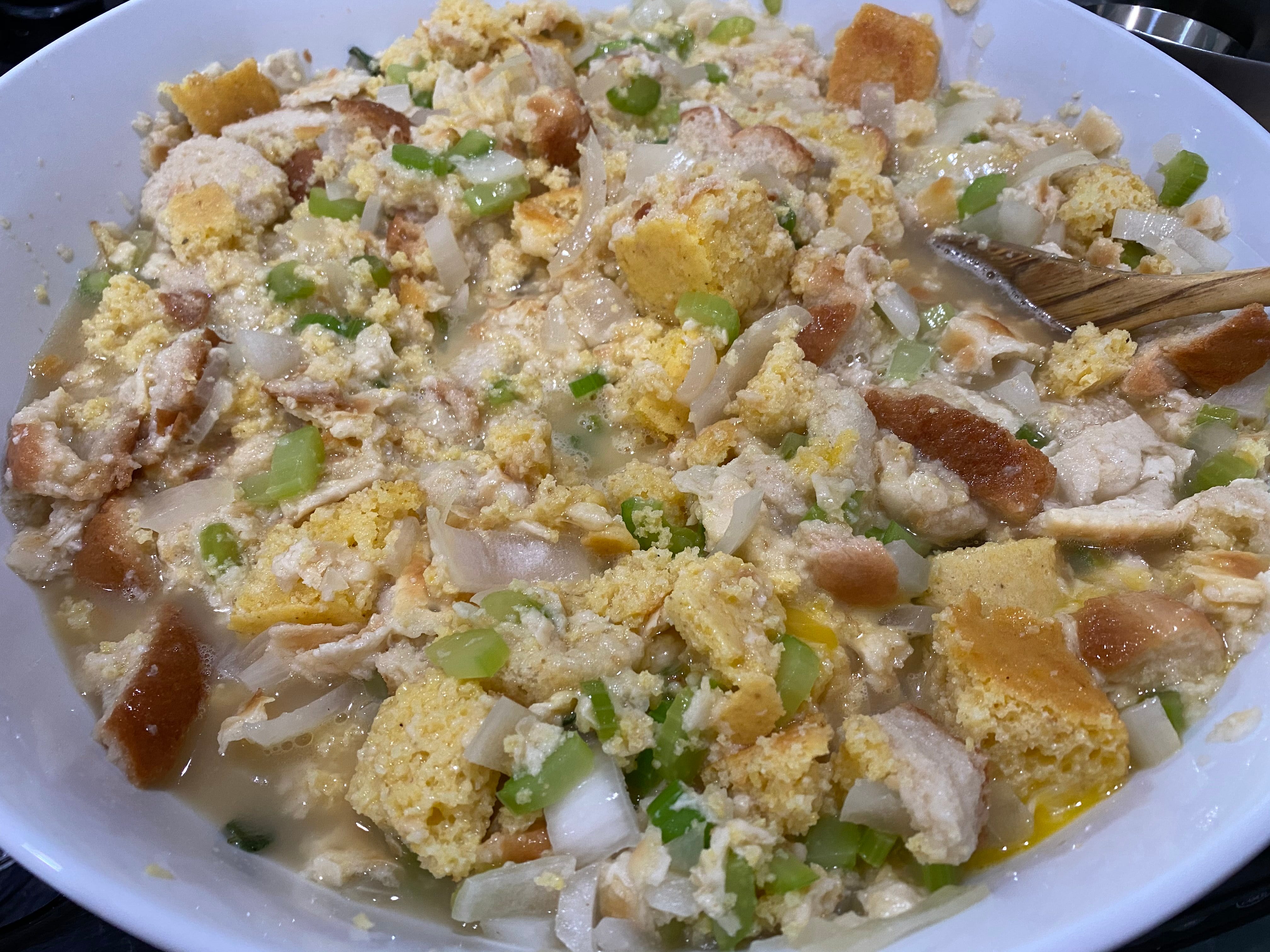 Paige Bennett for InsiderPaula Deen’s recipe called for too much vegetable broth.

When adding the vegetable stock, I stopped after about 5 cups because the mixture looked far too soggy already. Still concerned about the texture, I poured out more broth before adding five eggs to the mix.

I then transferred everything into a shallow, glass baking dish. It took about an hour in the oven for the mix to really crisp up.

The flavour was fine, but the texture was a complete miss 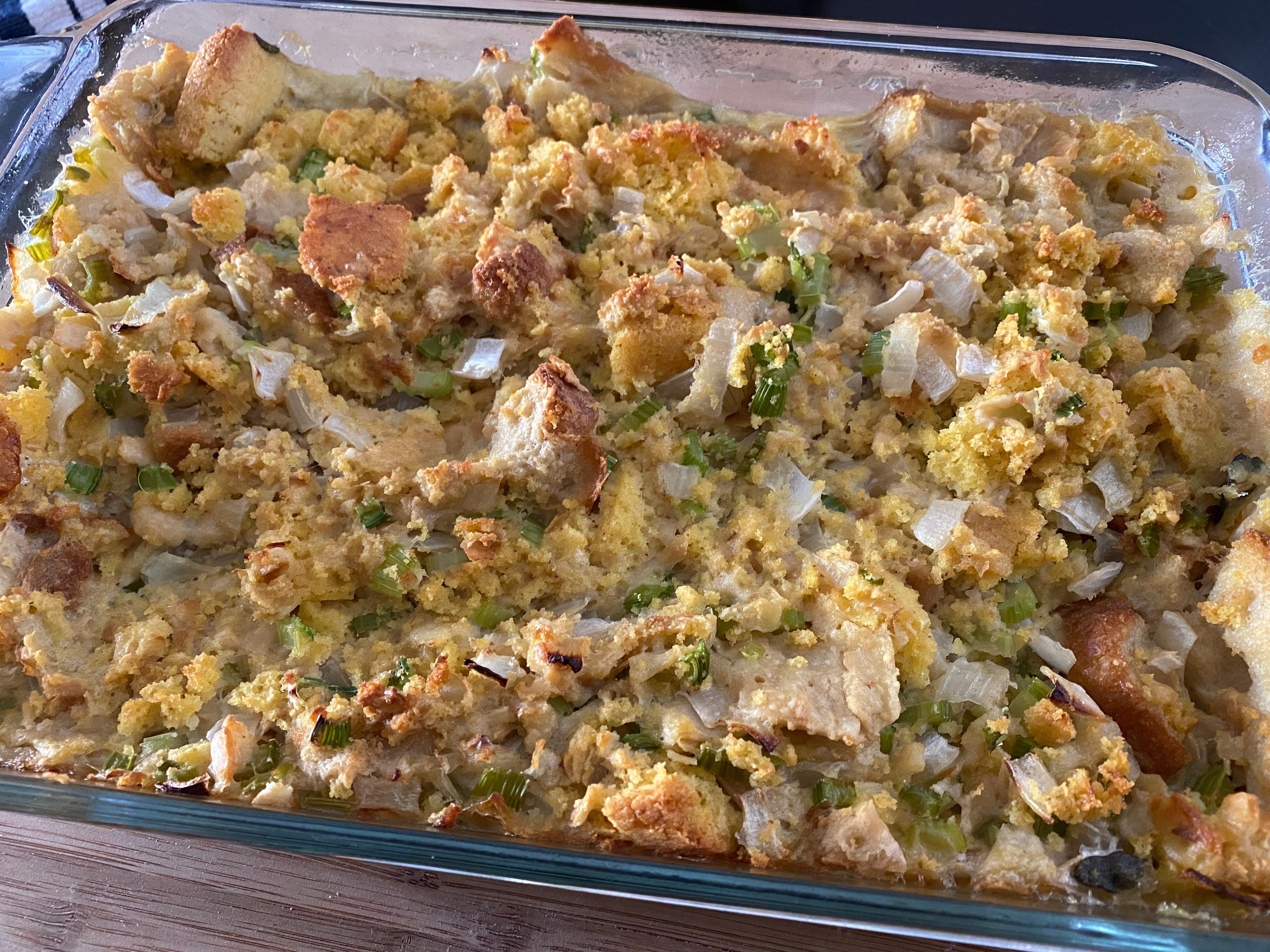 Paige Bennett for InsiderI pulled the finish stuffing out of the oven once it was browned.

The top was slightly golden, but it didn’t get as crispy as the other recipes I tested.

When I took a bite, I noted the interior was far too soggy â€” there was definitely too much broth, and the crackers turned mushy after absorbing the liquid. 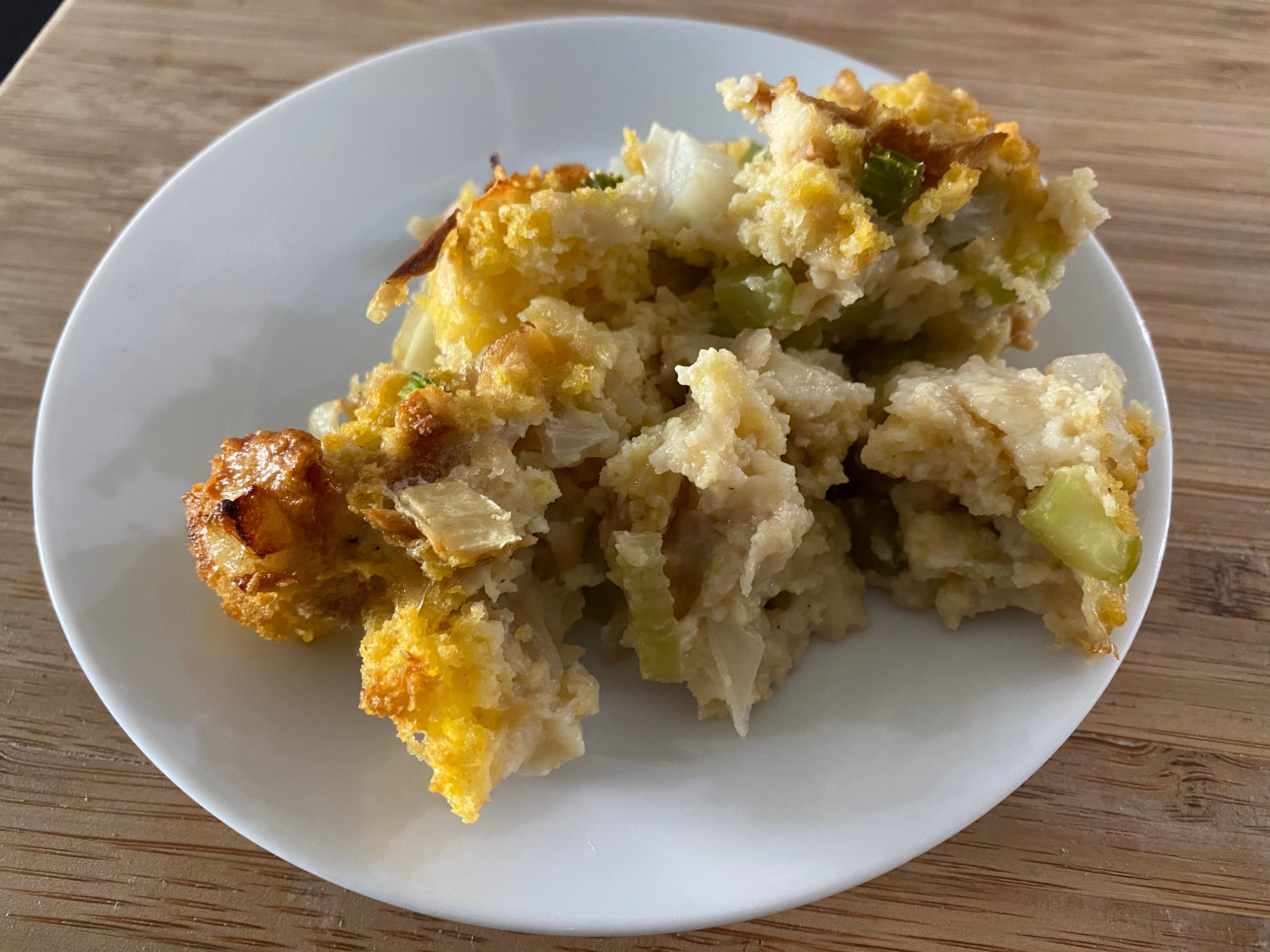 The flavour was ok â€” very savoury and buttery â€” but the extra-soggy texture was not appetizing.

If I made this again, I’d swap some of the crackers for more bread and cut the broth back by at least half of the amount called for. 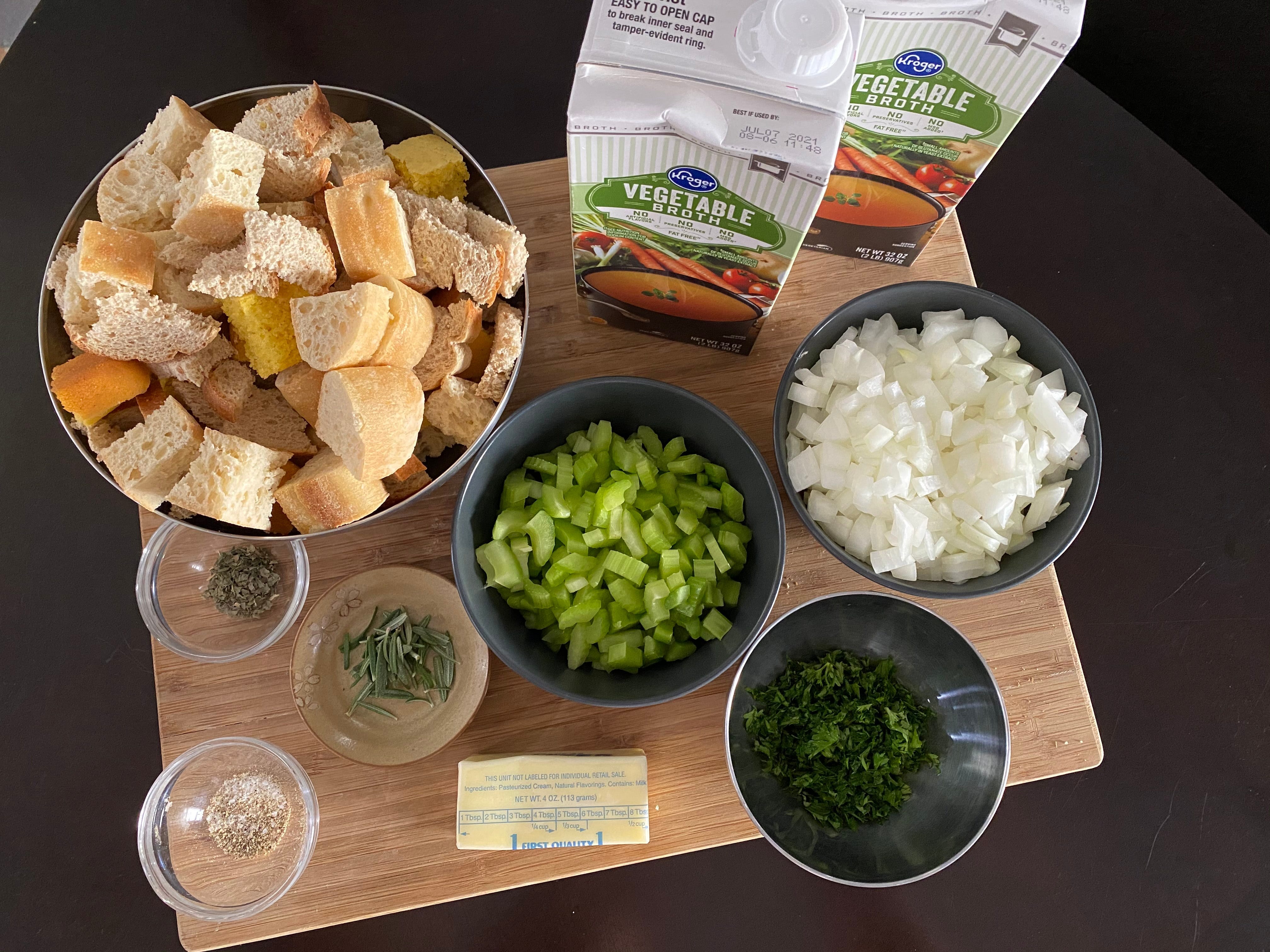 The Pioneer Woman’s recipe calls for a lot of bread â€” three different types, including homemade cornbread. Because I already had the ingredients needed to make Deen’s cornbread, I used that option for this recipe as well.

In addition to a large amount of bread, this recipe also requires a lot of parsley.

I noticed a little too late that I was supposed to dry the bread out for one to two days, but I threw it in the oven at 300 degrees Fahrenheit for 15 minutes and it still firmed up really well.

In general, this recipe had a similar process to the other two, from making the cornbread and dehydrating the other carbs to sautÃ©eing the veggies. 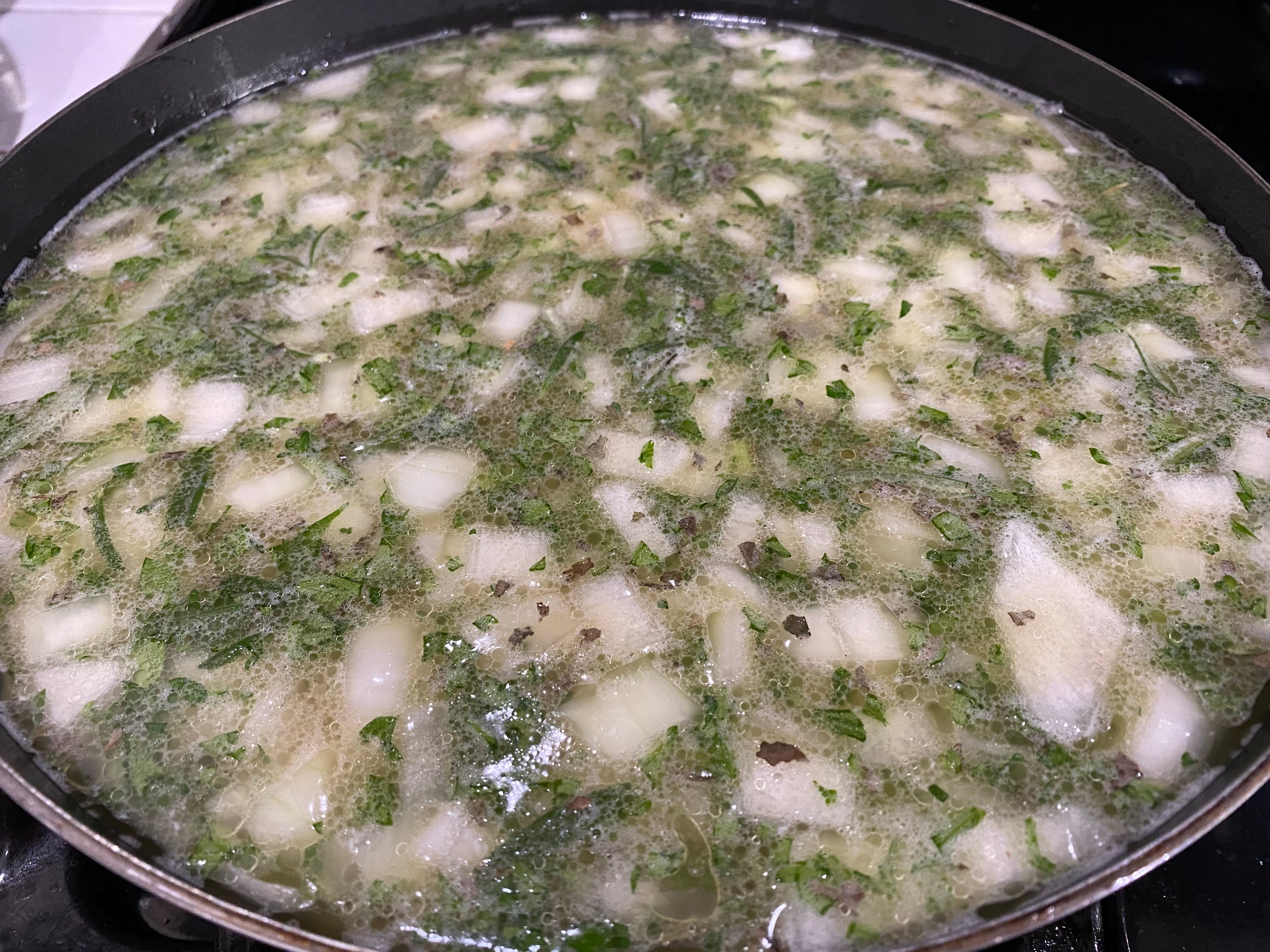 Paige Bennett for InsiderI spooned this mixture over the dried bread.

The recipe instructed me to add 6 cups of broth to the sautÃ©ed vegetables, then ladle this mixture onto the tossed bread cubes until they were soaked to my liking.

I preferred this approach, as it was easier to control and prevent the stuffing from becoming soggy. 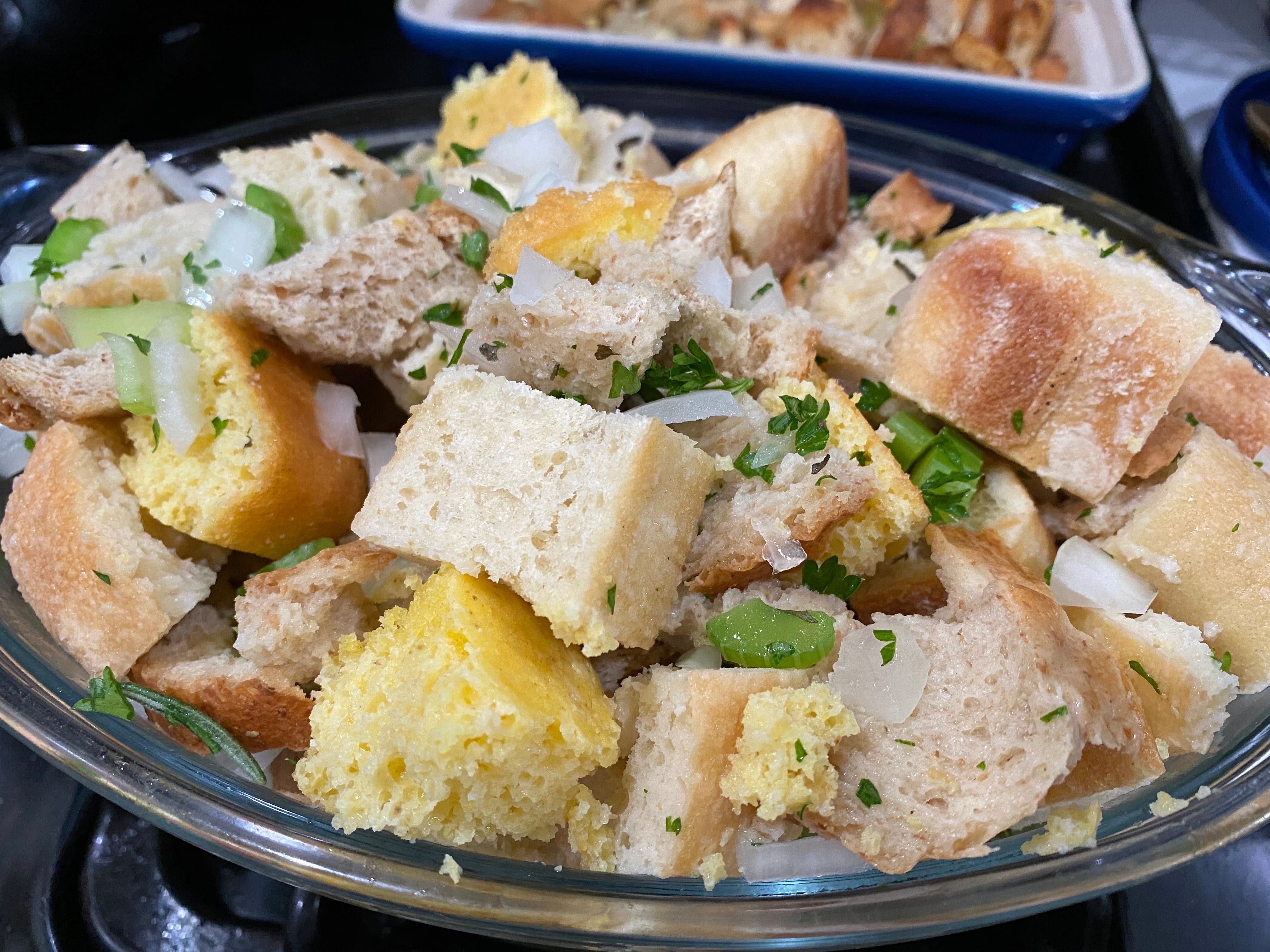 Paige Bennett for InsiderOnce the bread mixture was saturated, I cooked the stuffing in the oven for 40 minutes.

My stuffing took about 40 minutes in the oven rather than the 20 to 30 minutes the recipe called for, but the extra time helped it achieve a crisp, golden top.

The flavour would be better with less celery 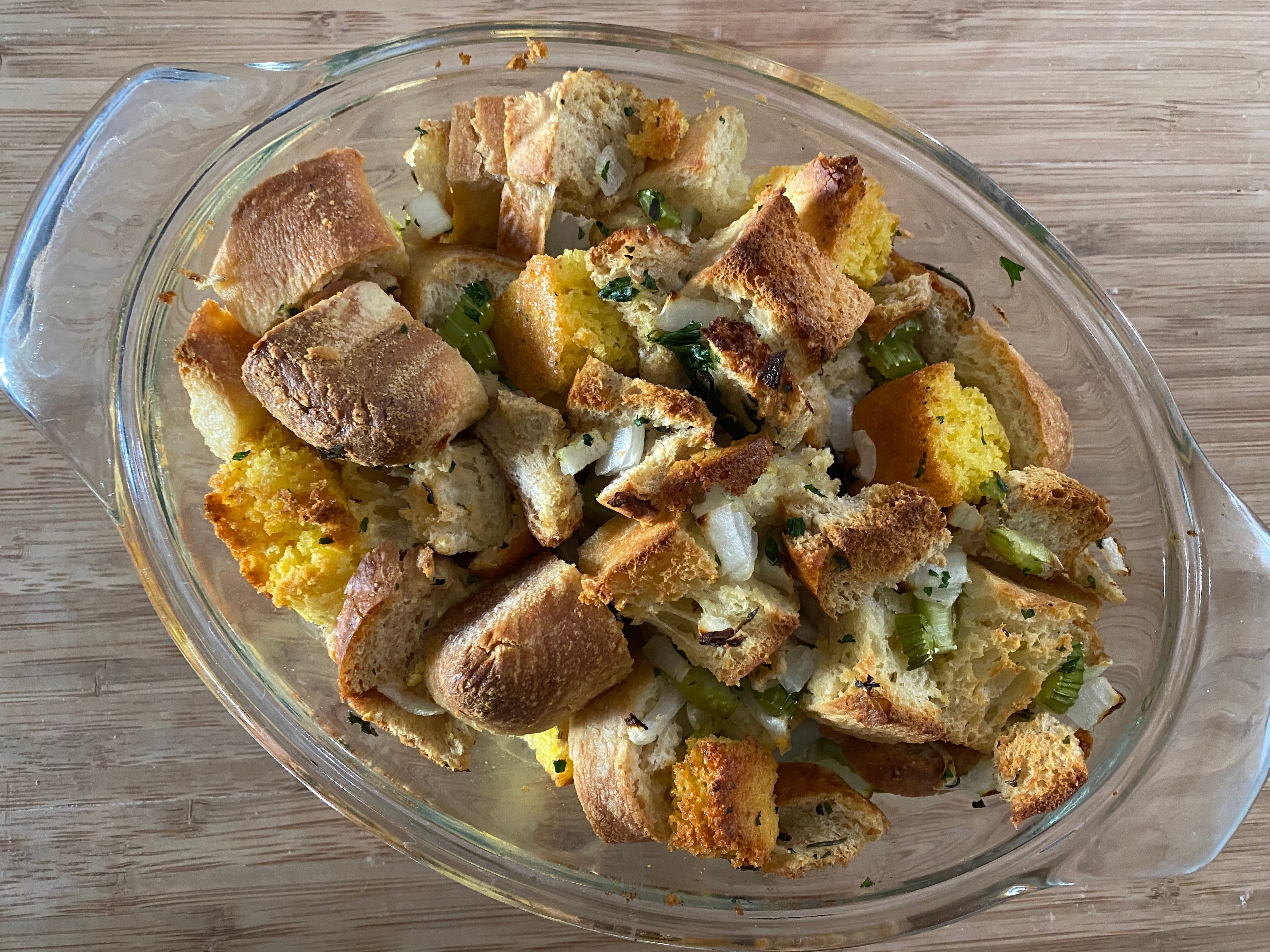 Paige Bennett for InsiderWhen I pulled it out of the oven, the stuffing was nicely browned.

Although the stuffing was toasty on top without being burnt, it still looked soggy inside when I served myself a portion.

But upon tasting it, the dish’s flavour and texture actually weren’t bad at all. The centre was slightly soggy, but not overwhelmingly so, and the extra-crispy top helped balance the texture. 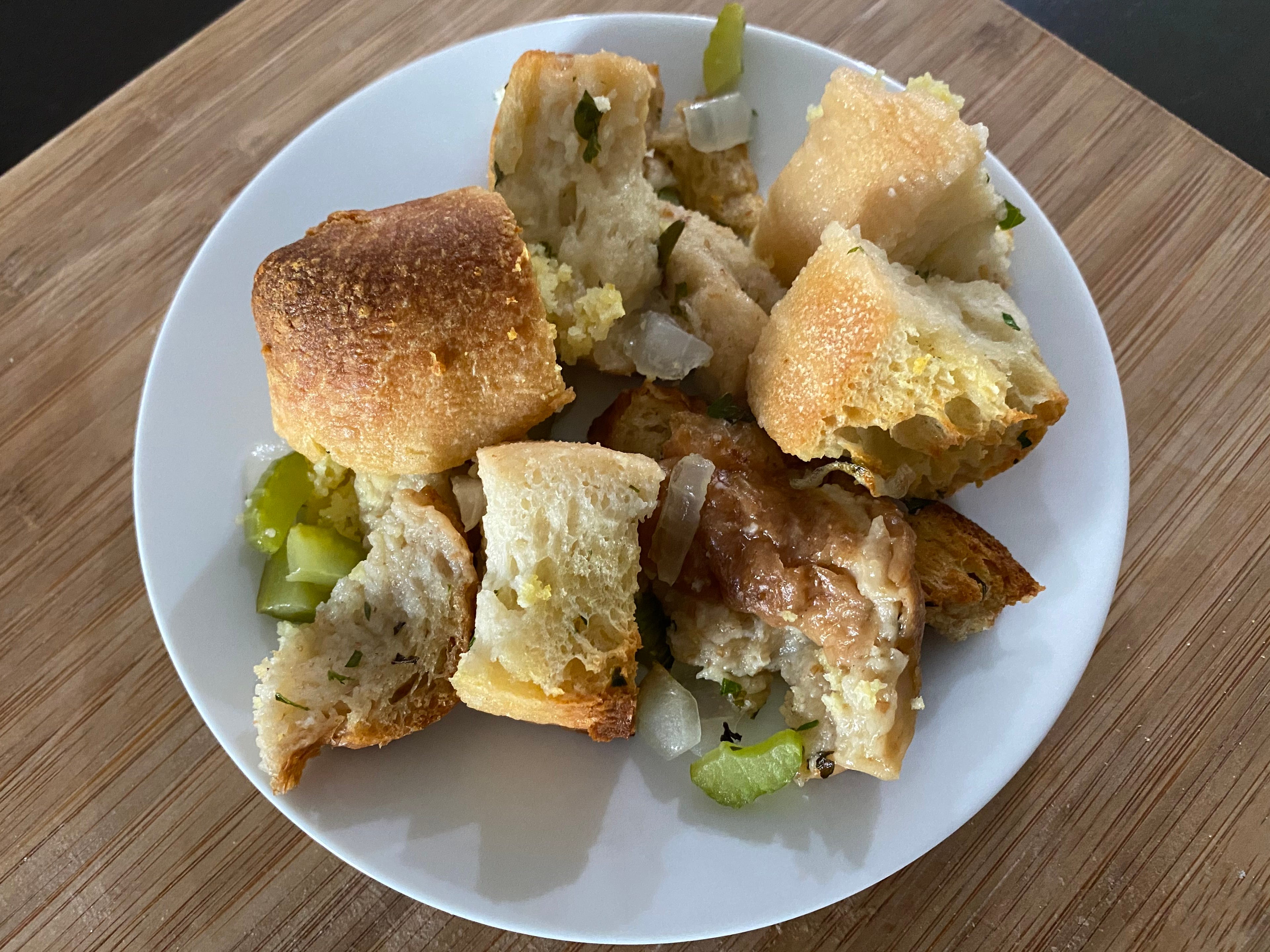 Paige Bennett for InsiderThe texture of Ree Drummond’s stuffing was not as soggy as it looked.

My only issue with this recipe was it had way too much celery. I’m not a fan of the vegetable in general, but I can tolerate it in moderate amounts â€” still, almost every bite tasted strongly of it.

That said, the bites with minimal celery were delicious, with a savoury, herby flavour.

Overall, all of these recipes would be worth making again with a few tweaks 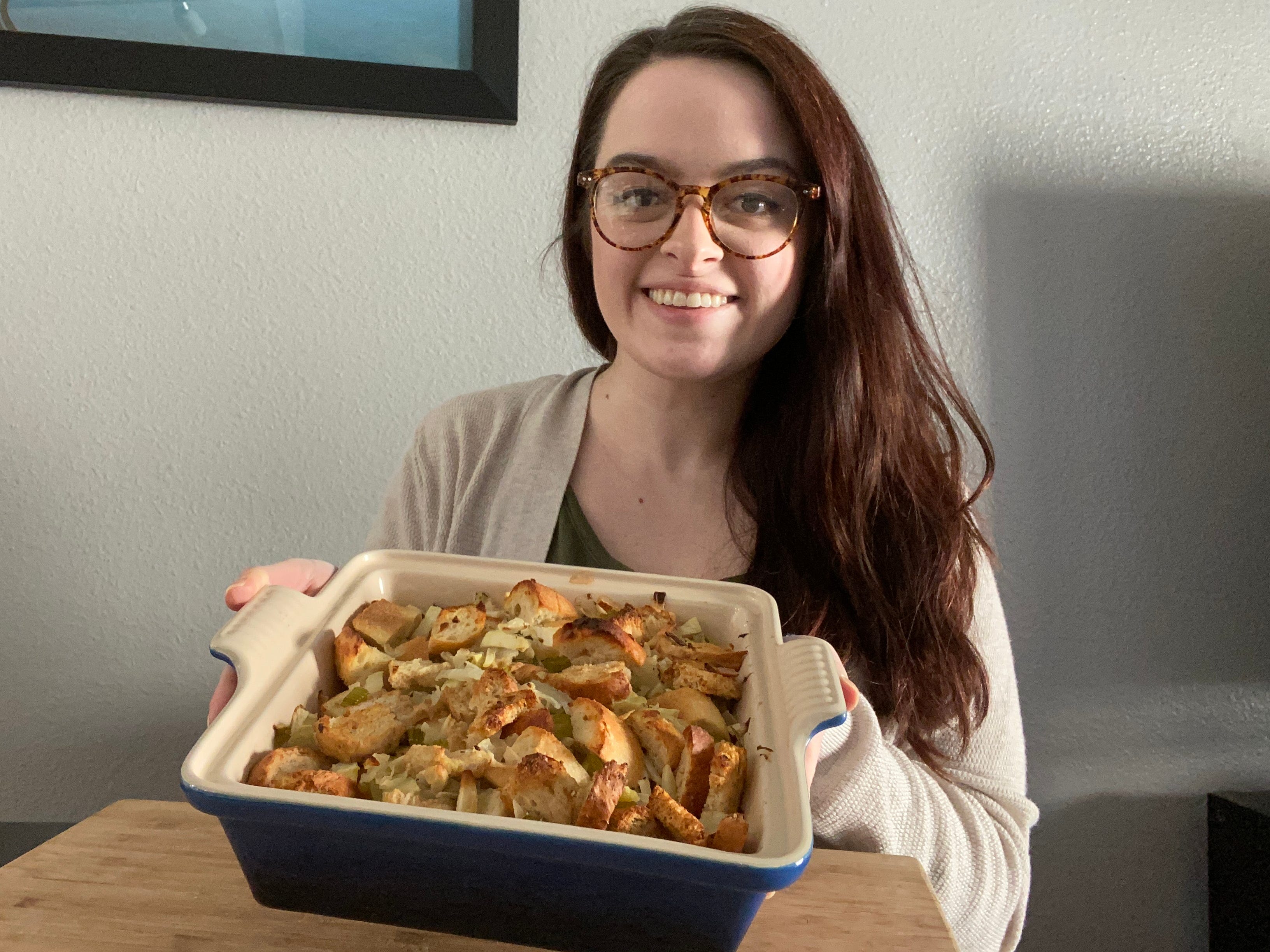 Paige Bennett for InsiderIna Garten’s stuffing was my favourite, but it still needed some adjustments.

If I had to choose a favourite, I’d probably go with Garten’s herby stuffing. I loved the flavour of the rosemary and apple, and it was the quickest and easiest recipe to follow. The only changes I’d make are to leave out the almonds and use less broth.

Deen’s recipe had an enjoyable savoury, buttery flavour, but it needed far less stock to fix the texture. I think adding more bread instead of as many crackers would also help.

For Drummond’s stuffing, I’d use slightly less broth for an even better texture and way less celery to help the flavour of the sautÃ©ed veggies and fresh herbs shine.

Plus Deen and Drummond’s recipes both took longer to make because they called for homemade cornbread. If you’re in a pinch, Garten’s recipe is definitely the way to go.