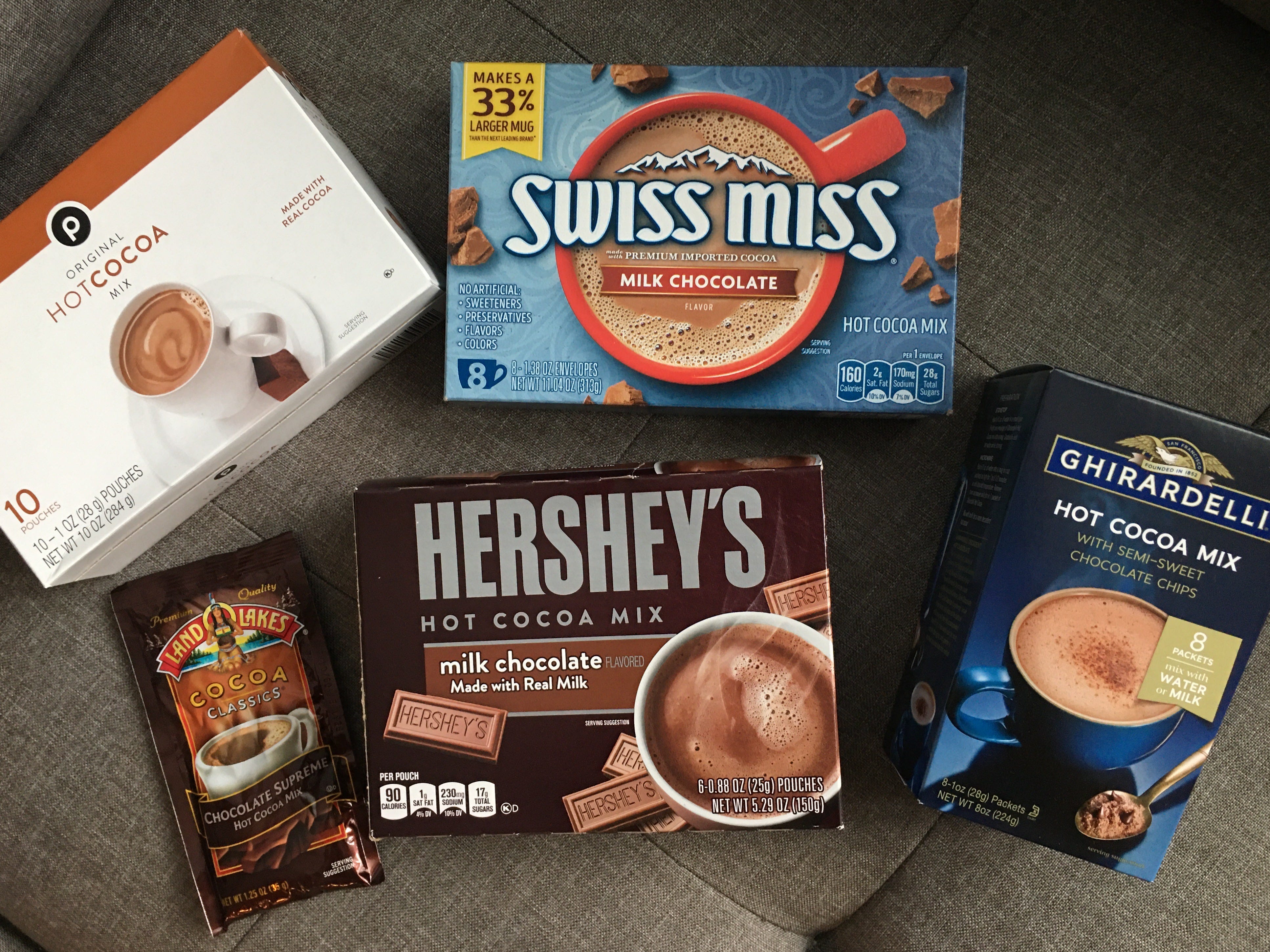 On cold days, there’s nothing better than putting on your warmest sweater and cozying up with a cup of hot cocoa. But with plenty of convenient options at the grocery store, it’s hard to know which one to choose.

To keep things consistent, I only bought standard mixes â€” not flavours like dark chocolate, marshmallow, or peppermint â€” and used a warm water base instead of a milk alternative.

Read on to find out how these hot cocoa mixes stacked up. 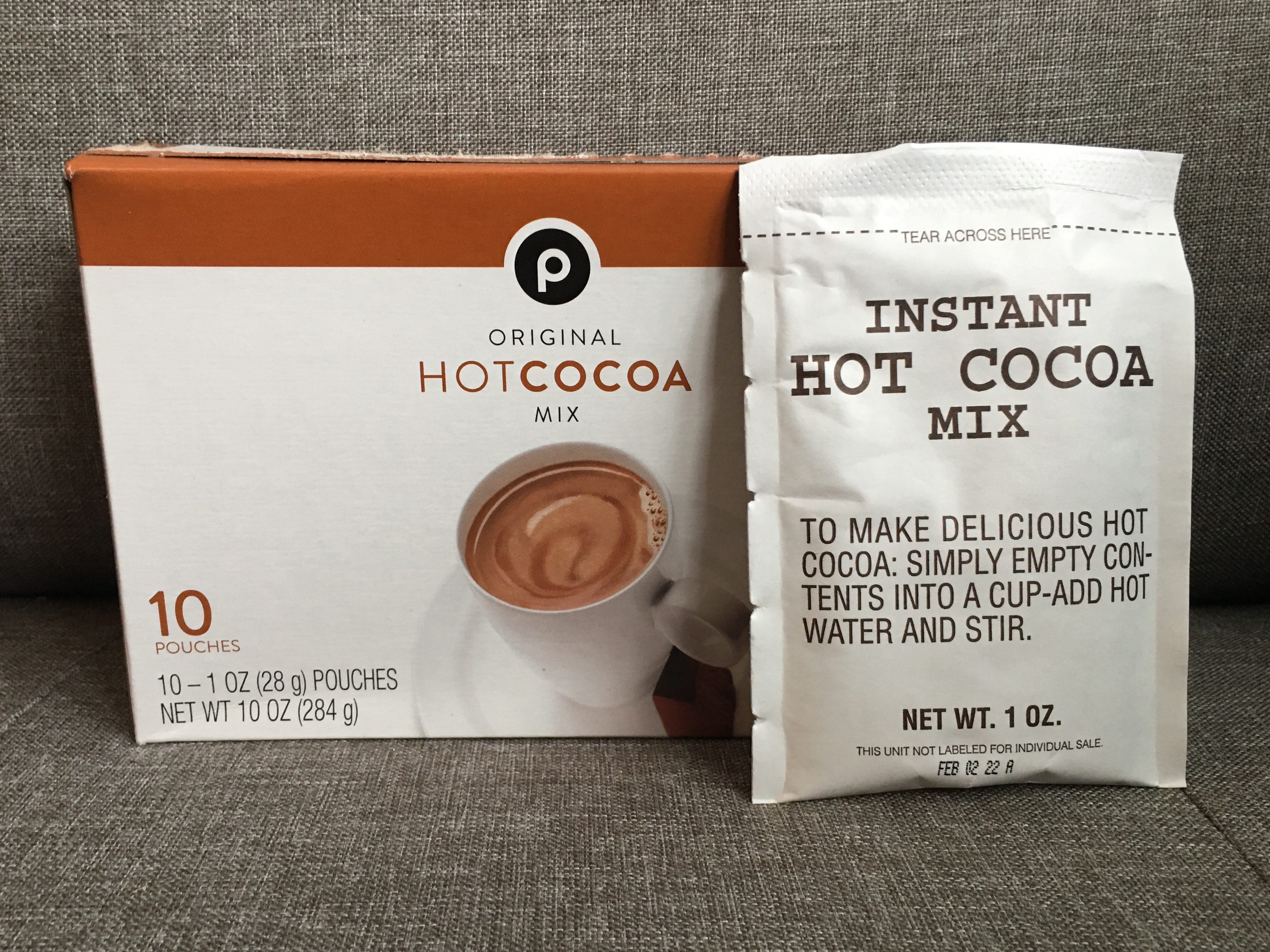 Abigail Abesamis for InsiderPublix’s hot cocoa with a single-serve packet.

This Southern store brand‘s hot-cocoa mix had the simplest packaging, from the brown-and-white box to the plain single-serve bags.

The package featured instructions for preparing the hot cocoa using hot water and a microwave.

I had a small microwave mishap, but it didn’t affect the hot cocoa’s flavour. 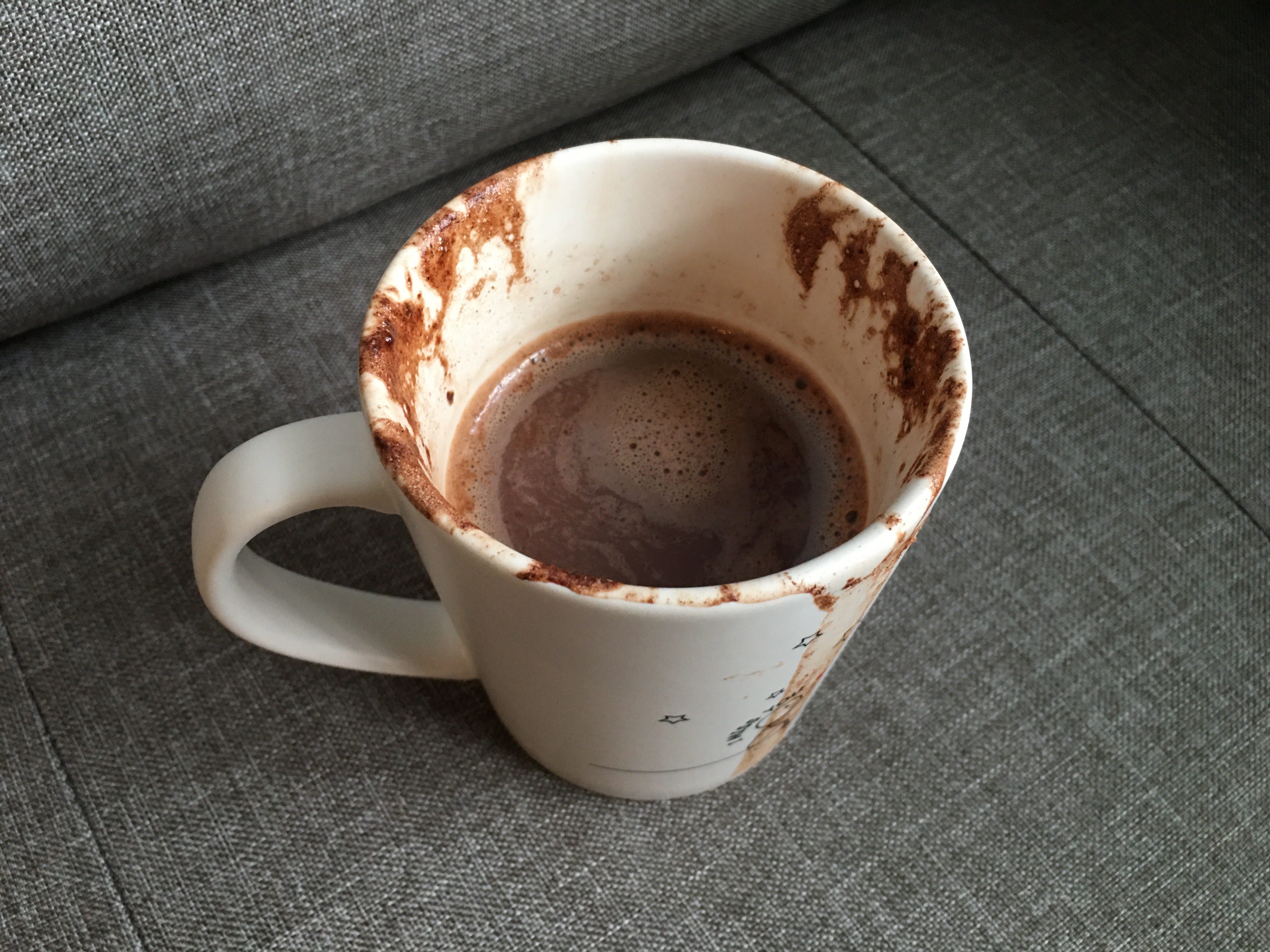 Abigail Abesamis for InsiderThe hot cocoa overflowed in the microwave.

Per the package instructions, I mixed the contents of a singular pouch with 3/4 cup (6 ounces) of water in a microwave-safe mug and heated the drink in the microwave for a minute and a half.

I wasn’t watching the mug closely, and the hot cocoa overflowed a few seconds before it was done warming up.

I waited for the hot cocoa to cool enough before trying it, but I thought it tasted very sweet and watery and lacked a strong chocolate flavour.

I tried Hershey’s milk-chocolate-flavored mix, which boasts having real milk as an ingredient. 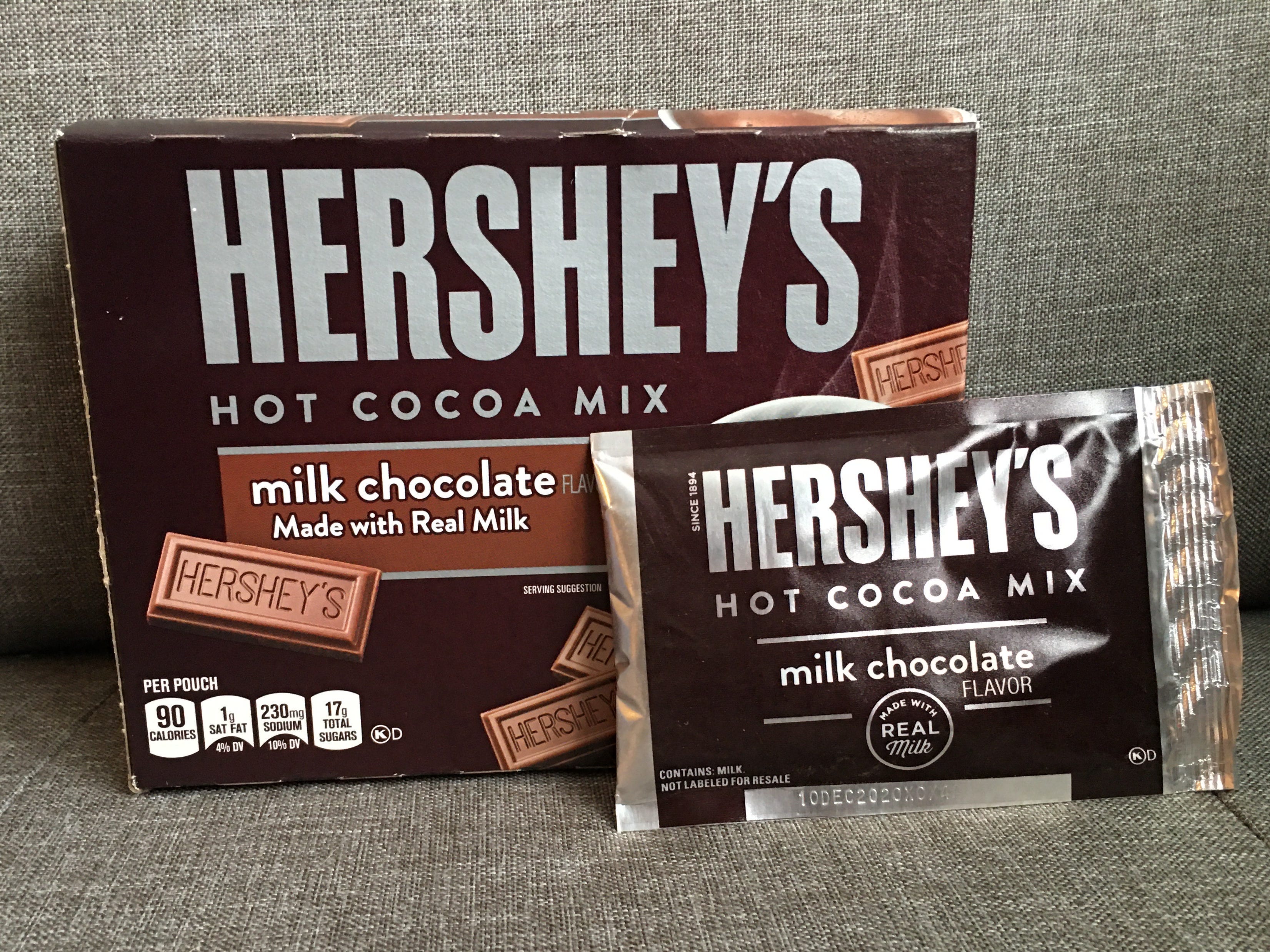 I imagined this hot cocoa would taste like a melted Hershey’s chocolate bar and looked forward to trying it.

Each single-serve packet had foil edges to resemble the iconic Hershey’s bar wrapper, which I thought was a nice touch.

Although the hot cocoa didn’t spill this time, its flavour was disappointing. 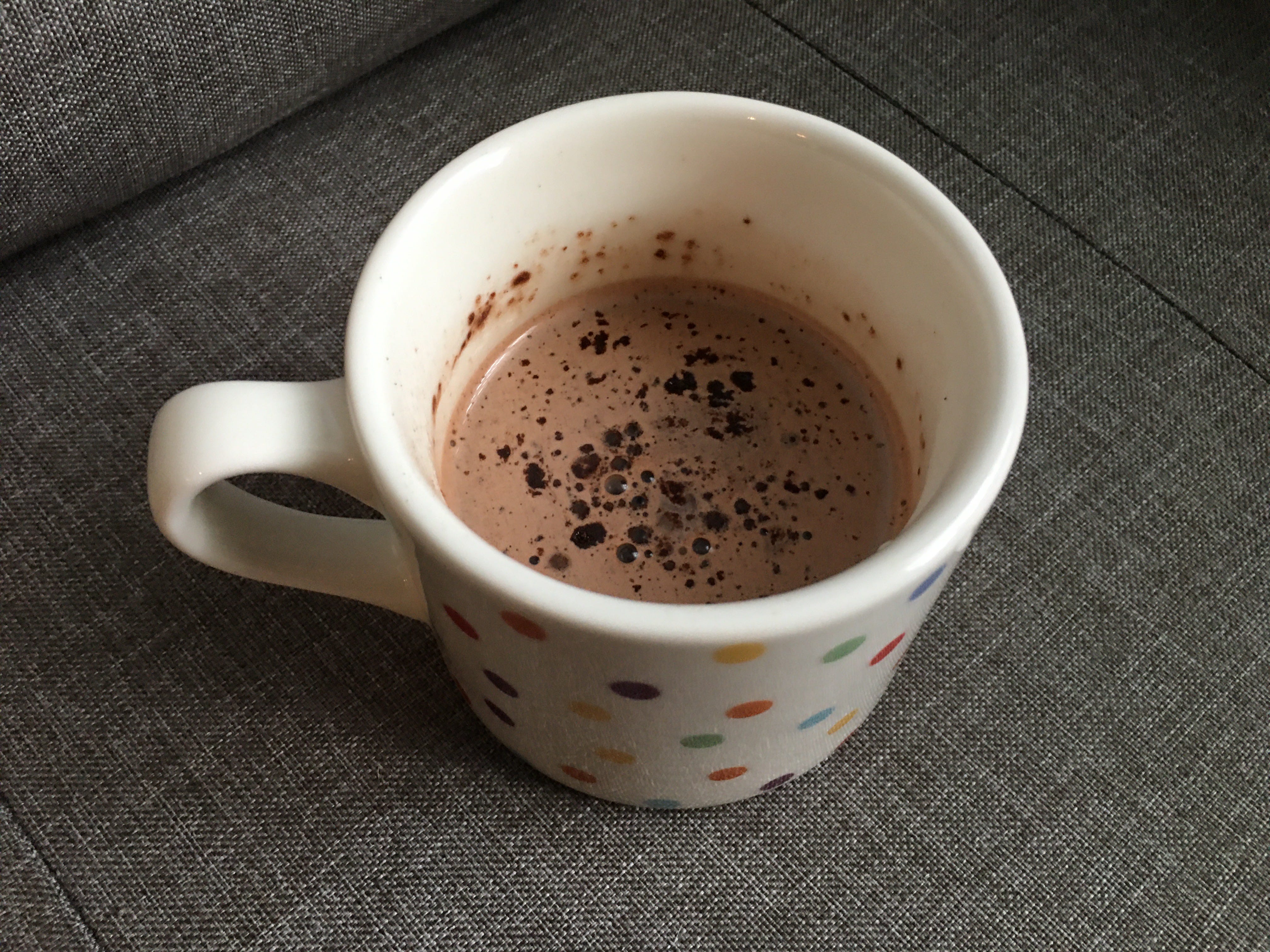 Abigail Abesamis for InsiderHershey’s hot-cocoa mix didn’t dissolve as well as the others.

I followed the package instructions and microwaved 3/4 cup of water for 1 minute, then added the hot-cocoa mix and stirred until it was fully dissolved. The water must not have been hot enough, because some powder pooled at the top.

Although Hershey’s hot cocoa had a richer feel and smoother texture compared to Publix’s, the flavour was unusual and hard to place. It tasted slightly bitter and very artificial – definitely not like chocolate, Hershey’s or otherwise. 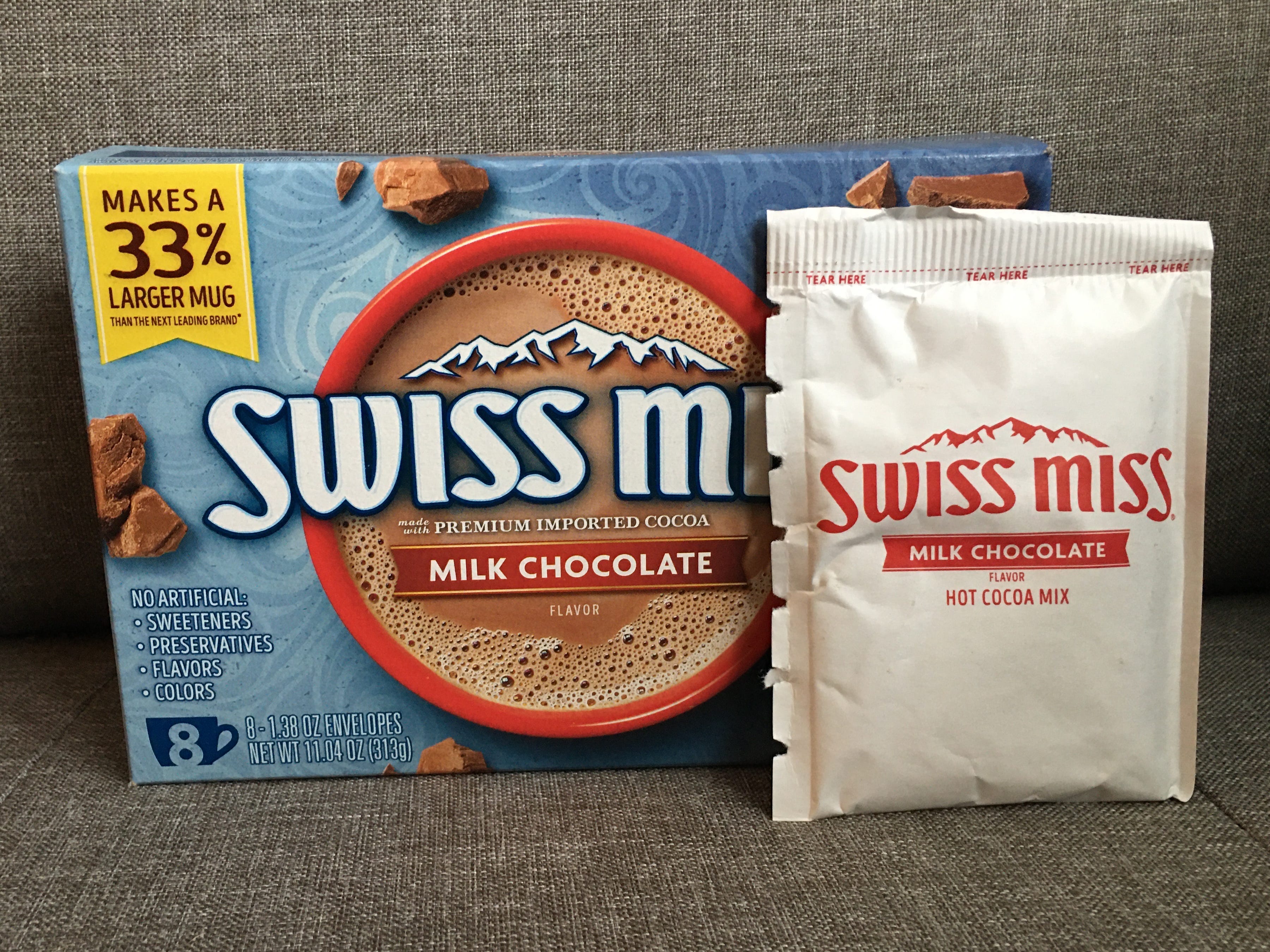 I drank Swiss Miss growing up, so it’s the brand I most associate with powdered hot-cocoa mix. Although I’d usually go for the marshmallow variety, I picked up the milk-chocolate flavour for the sake of consistency.

As written on the packaging, Swiss Miss hot cocoa is made without artificial sweeteners, preservatives, flavours, and colours.

Swiss Miss’ hot cocoa was frothy and made the largest amount. 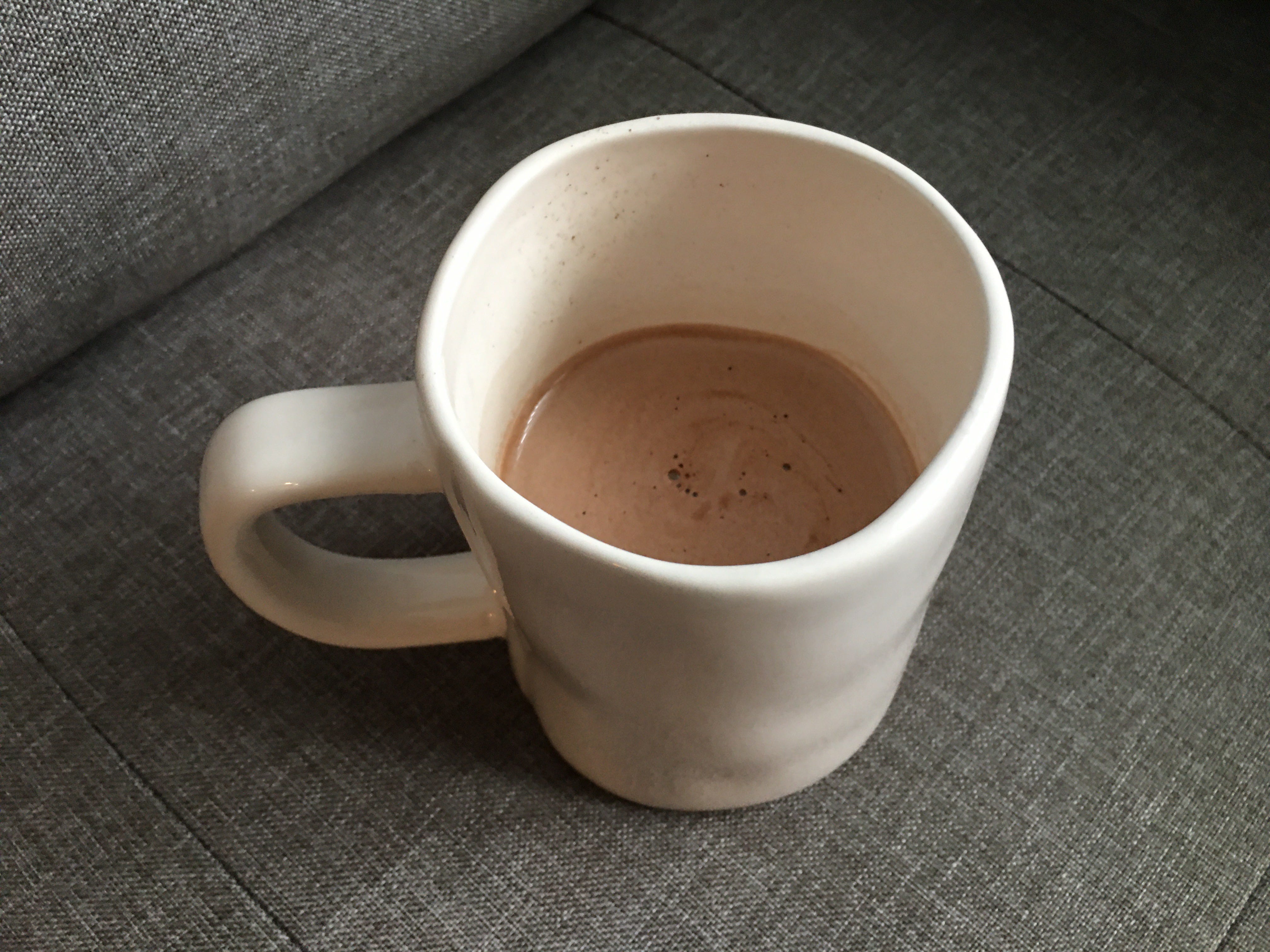 The other hot-cocoa mixes called for 3/4 cup water, but Swiss Miss’ required a full cup, so I got more bang for my buck. All of the powder quickly dissolved in the hot water without hassle.

Although the chocolate flavour wasn’t strong, the taste was balanced, not too sweet or too milky. But despite not tasting the sweetest compared to the others, it had 23 grams of added sugar – the most of any brand I tried.

Ghirardelli’s hot-cocoa mix is made with semisweet chocolate chips. 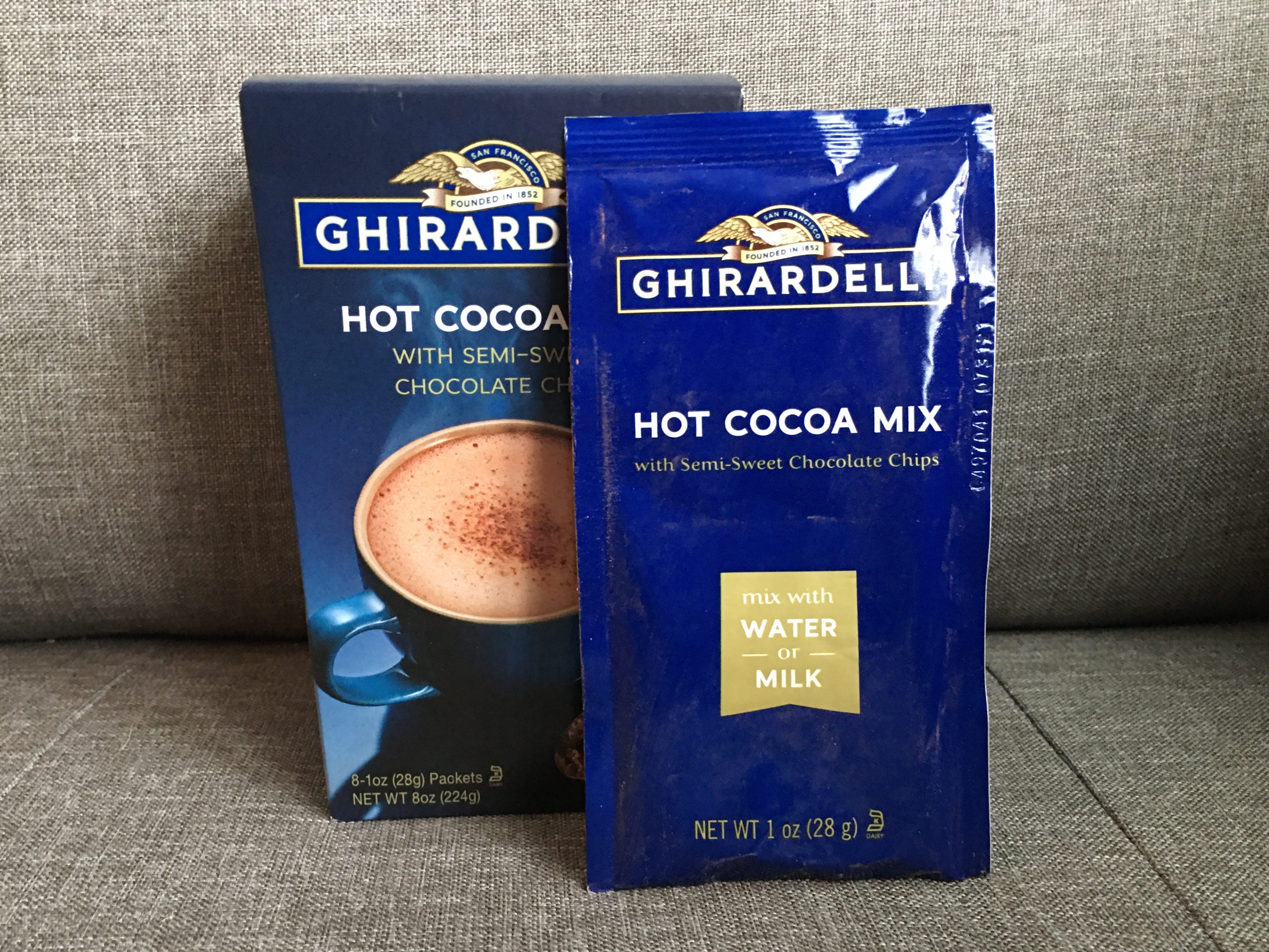 The Ghirardelli hot cocoa mix had the most polished packaging, which was a nice touch that suggested a more premium product and experience.

The instructions on the box included options for cooktop and microwave preparation, but also offered a third recipe for “decadent hot chocolate,” in which you add a square of Ghirardelli chocolate to the drink.

My first sip of the Ghirardelli hot cocoa was rich and chocolaty. 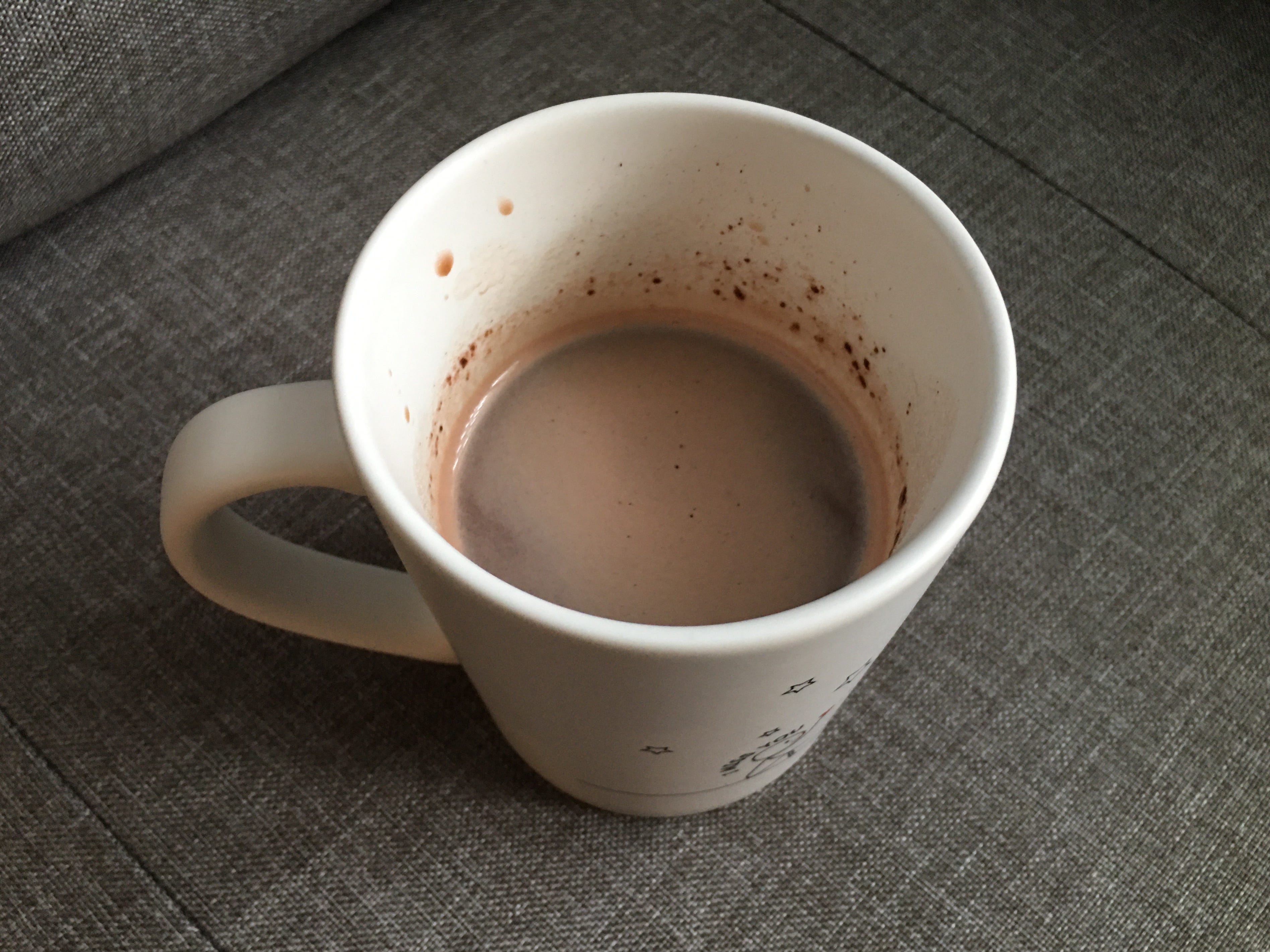 Abigail Abesamis for InsiderGhirardelli’s hot cocoa was delicious and decadent.

I added the package contents to a mug with 3/4 cup of water and microwaved it for a minute to a minute and a half.

The Ghirardelli hot cocoa definitely had the most intense chocolate flavour, which I appreciated. The drink’s rich taste and texture felt gourmet, but it wasn’t heavy enough that I couldn’t finish the whole cup.

There was a depth of flavour and body to this hot cocoa that stood out above the others – it almost reminded me of drinking a bar of chocolate.

The last hot cocoa I tried was Land O’Lakes’, which came as a single-serve packet. 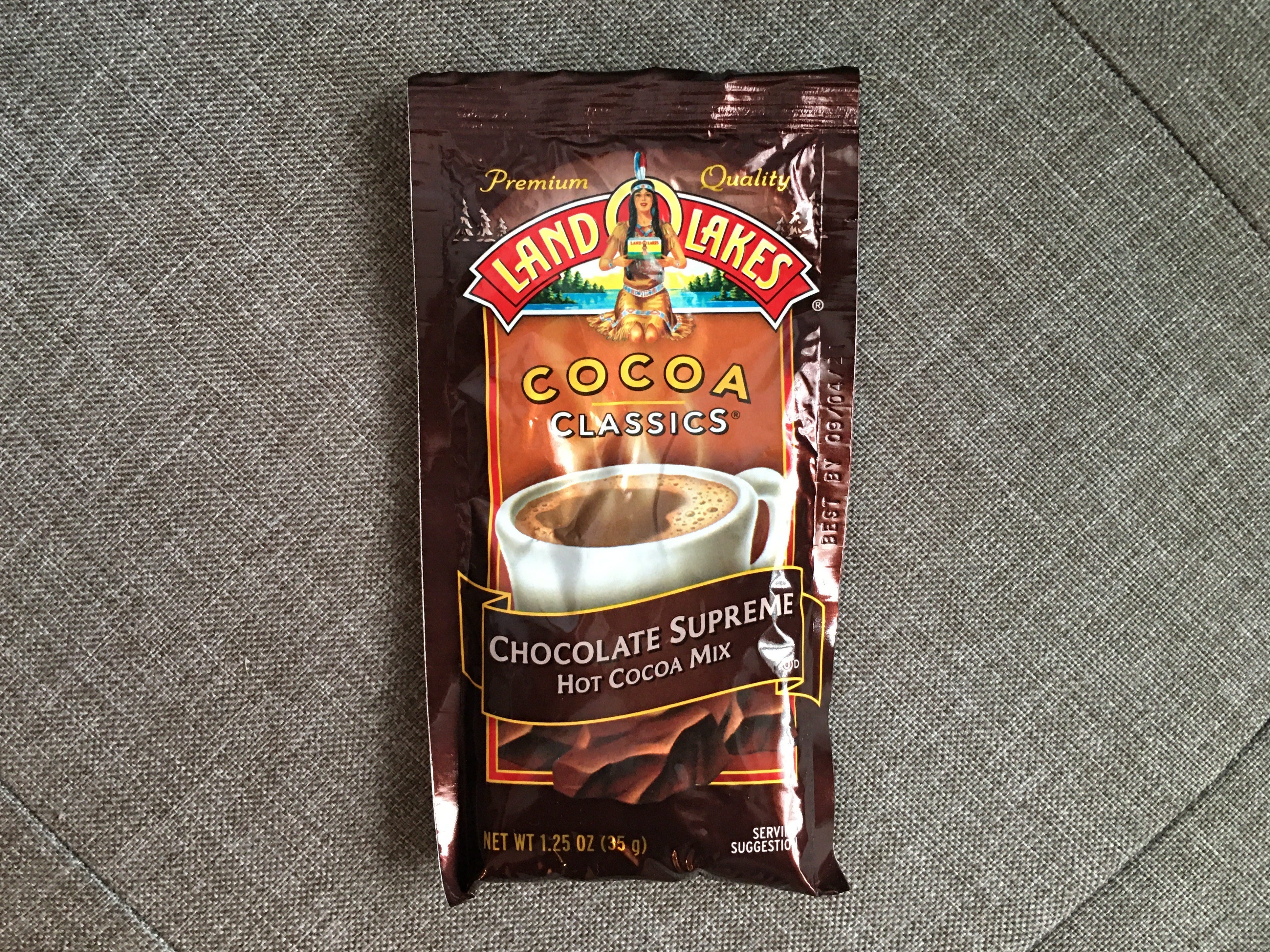 This hot-cocoa mix was the only one I could find sold as a single-serve packet, which is nice if you want to sample different flavours. On top of the convenience, Land O’Lakes offers a range of flavours like mint, raspberry, caramel, hazelnut, and Irish creme.

The packet offered instructions for preparing the cocoa as a hot or cold drink. 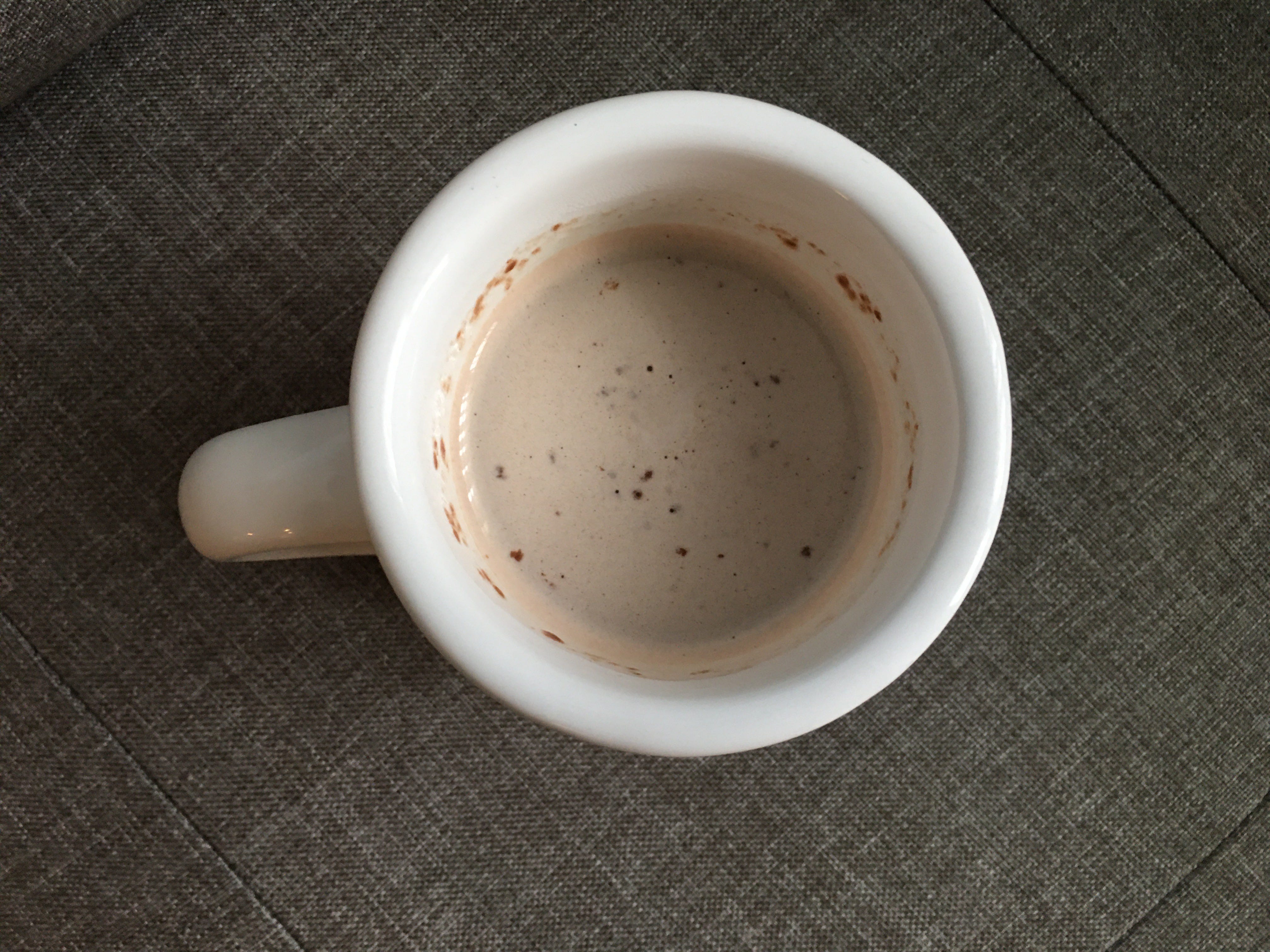 Abigail Abesamis for InsiderAlthough the Land O’Lakes hot cocoa was sweet, there were hints of caramel and vanilla instead of chocolate.

I followed the instructions for the warm alternative, pouring the mix into a mug and stirring in 3/4 cup of hot water.

Like the Hershey’s hot cocoa, the Land O’Lakes mix didn’t taste much like chocolate – it was sweet, with hints of caramel and vanilla. Despite not having the expected flavour, this hot cocoa was more enjoyable than some others because of its creamy texture that wasn’t too watery.

Although these hot-cocoa mixes were inexpensive and easily accessible, they lacked the deep, chocolaty flavour I craved. 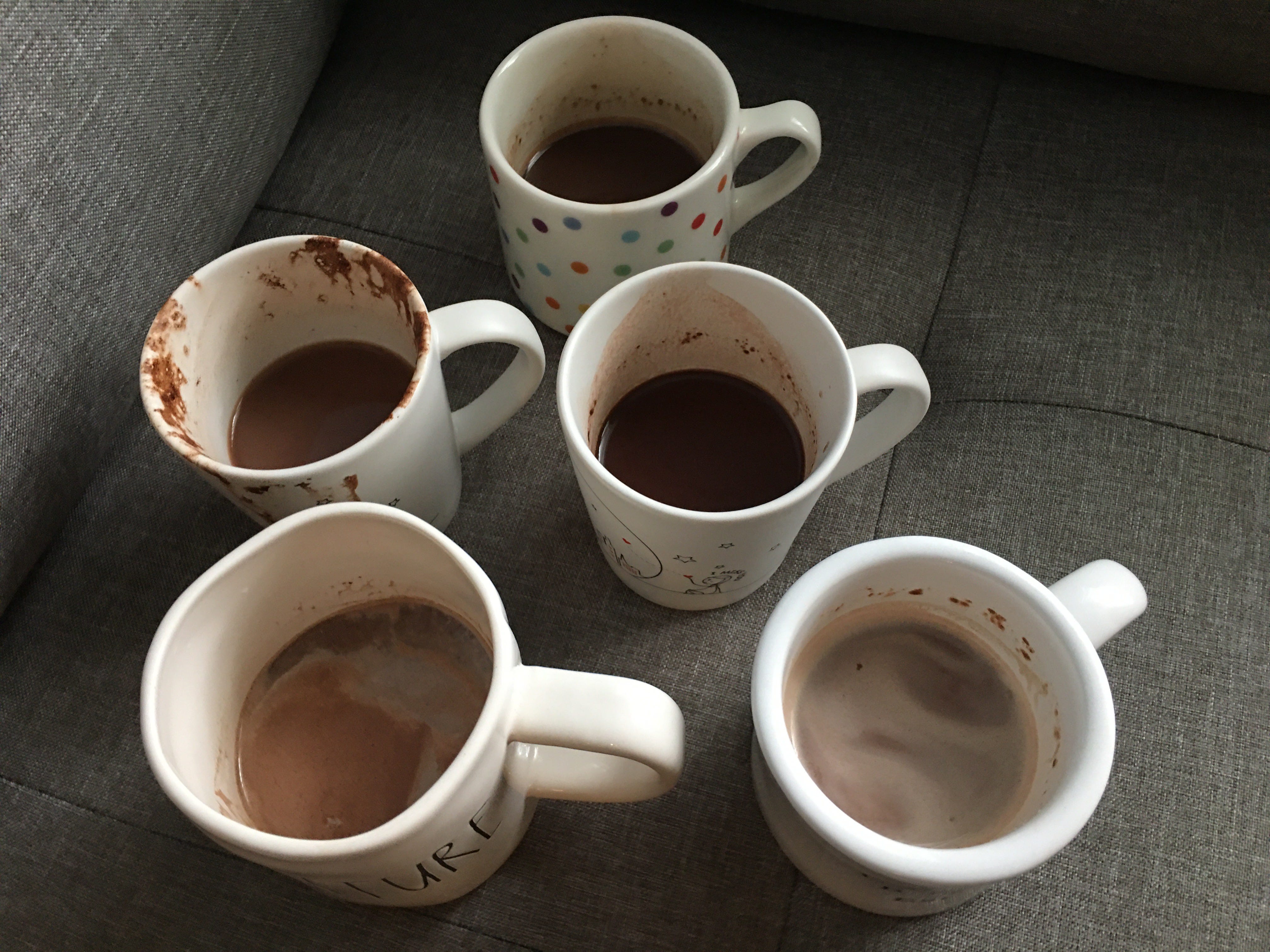 It became clear as I conducted this taste test that for a rich texture and deep chocolate flavour, prepackaged hot cocoa wasn’t the best option.

For these qualities, I’d recommend trying hot chocolate – which is made with melted chocolate instead of cocoa powder.

Even so, Ghirardelli’s hot cocoa was the clear winner of this taste test. 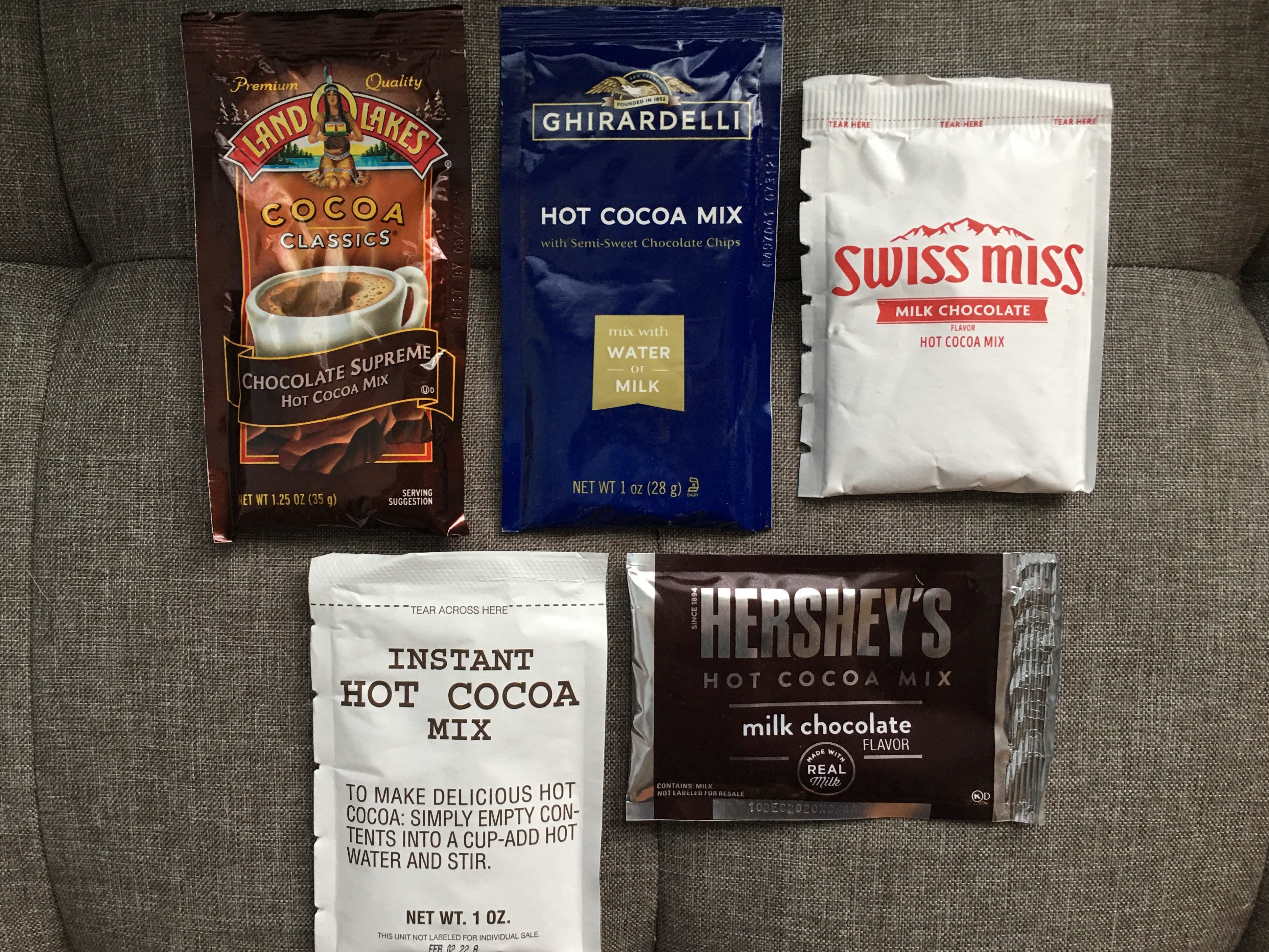 Abigail Abesamis for InsiderGhirardelli’s hot-cocoa mix took the cake, and Swiss Miss’ was the runner-up.

Ghirardelli’s hot cocoa satisfied my desire for a rich, chocolaty drink and its thicker texture made it taste more gourmet than the others.

My runner-up is Swiss Miss for the nostalgia factor and the fact that it had a balanced flavour that wasn’t too sweet or so milky that the chocolate flavour disappeared.