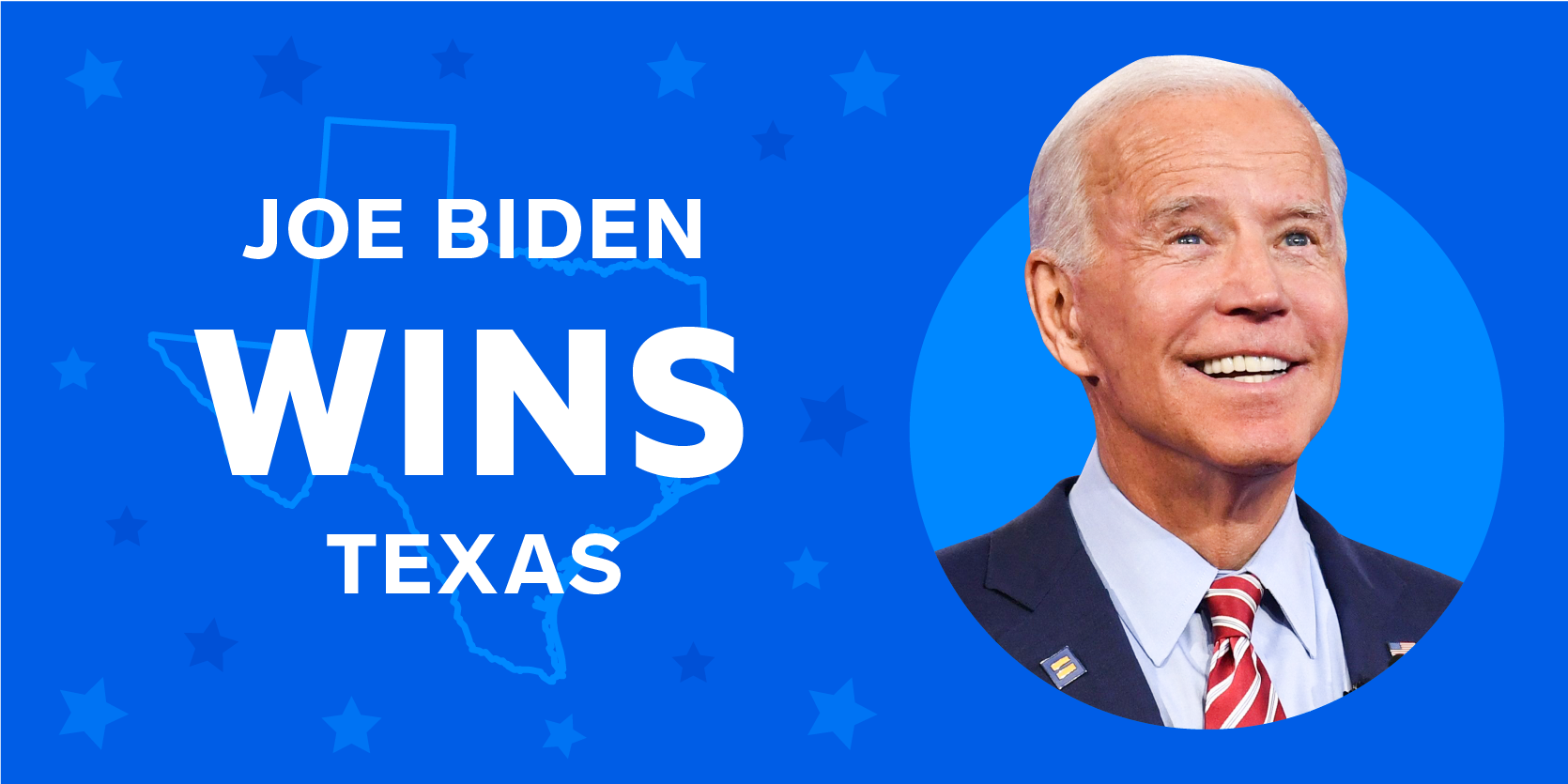 Polls closed at 7 p.m. CT (8 p.m. ET), with 228 pledged delegates up for grabs, making the state the second-largest contest of Super Tuesday.

After a tight race with impressive turnout in the Lone Star State, Biden earned a crucial victory in the second-most-delegate-heavy Super Tuesday state.

Biden clinched the state with 65% of precincts reporting and a roughly 40,000-vote lead on Sanders, who led early in the evening but watched his advantage diminish as Tuesday turned into Wednesday.

Minutes after midnight, Biden saw a surge that cut Sanders’ lead to just 450 votes. Less than 30 minutes later, the former vice president had overcome the deficit and then some, pulling away by roughly 30,000 votes with 57% of the state’s precincts reporting.

While Sanders and Biden duked it out for the top spot in the state, third and fourth place will also be critical to how big of a prize the state is for the two frontrunners. Both former Mayor Mike Bloomberg of New York City and Sen. Elizabeth Warren of Massachusetts were polling near the 15% threshold necessary to secure delegates statewide.

As things stand, it looks as if Bloomberg could hold on to statewide viability, while Warren is a long shot to reach the mark. Both, however, could still add to their total in congressional districts.

Turnout in Texas is looking to far surpass that of 2016, when just over 1.4 million votes were cast in the primary – turnout for 2020 had nearly reached that total with just about half of precincts reporting.

Long lines to vote were also reported across the state.

Texas has been allocated 228 pledged delegates who will go to the Democratic National Convention in Milwaukee this July to select the nominee, or 5.7% of the total number of delegates, making it the second-biggest prize of Super Tuesday. Of those 228, 79 delegates will be allocated proportionally based on the state-wide vote, while the remaining 149 will be won at the congressional-district level.

Candidates must reach a 15% threshold to win delegates at both the statewide and congressional-district levels. 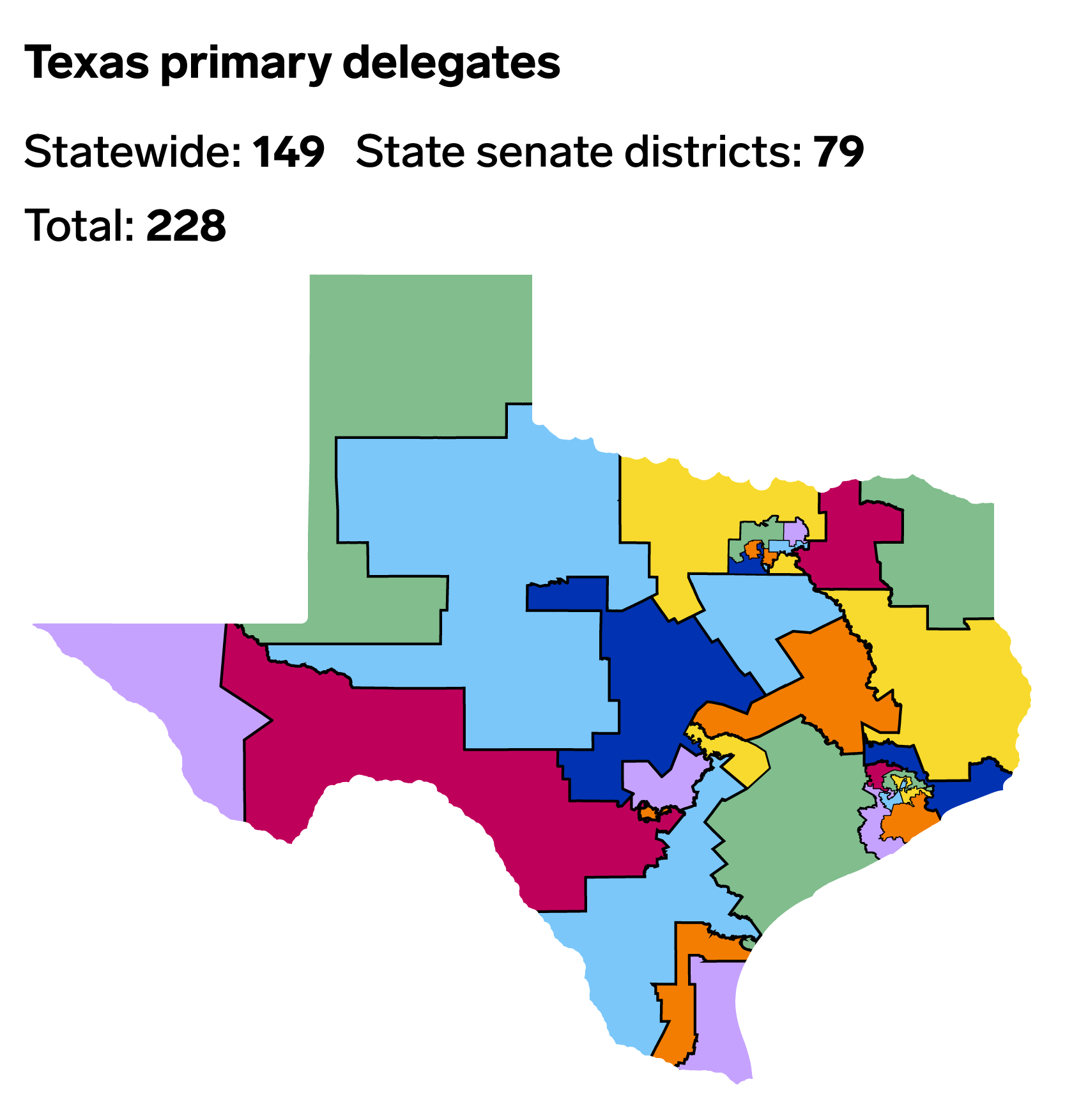 Who did the polling say is ahead?

Texas seemed poised to be hotly contested on Super Tuesday, and with California’s results expected later in the week given the state’s large proportion of mail-in votes, the Lone Star State could serve as the biggest momentum-booster available to campaigns on Tuesday night.

According to RealClearPolitics’ average of the latest polling data, Sen. Bernie Sanders led the race in Texas with 30.3% support, 6 points ahead of the next-closest candidate in the race, former Vice President Joe Biden, who was at 24.3%.

Former Mayor Michael Bloomberg of New York City and Sen. Elizabeth Warren of Massachusetts were close to the 15% threshold necessary to take delegates in the state, polling at 16.7% and 14.7%.

According to FiveThirtyEight’s election forecast, Biden was the favourite to win the state, with a 56% chance of winning the most votes, followed by Sanders, who had a 42% chance to take the state.

Forecasting Texas was especially tricky given the number of changes that the race took in the days leading up to the primary. After Biden’s strong showing in the South Carolina primary, three candidates – Sen. Amy Klobuchar, former Mayor Pete Buttigieg of South Bend, Indiana, and Tom Steyer – dropped out of the race. Klobuchar and Buttigieg went on to endorse Biden at a rally in Texas on Monday night, which could have swing some of the Texas voters they were projected to take in the state in former vice president’s favour.