Tokyo's subway system is one of the best in the world. Here's what it's like to ride it. 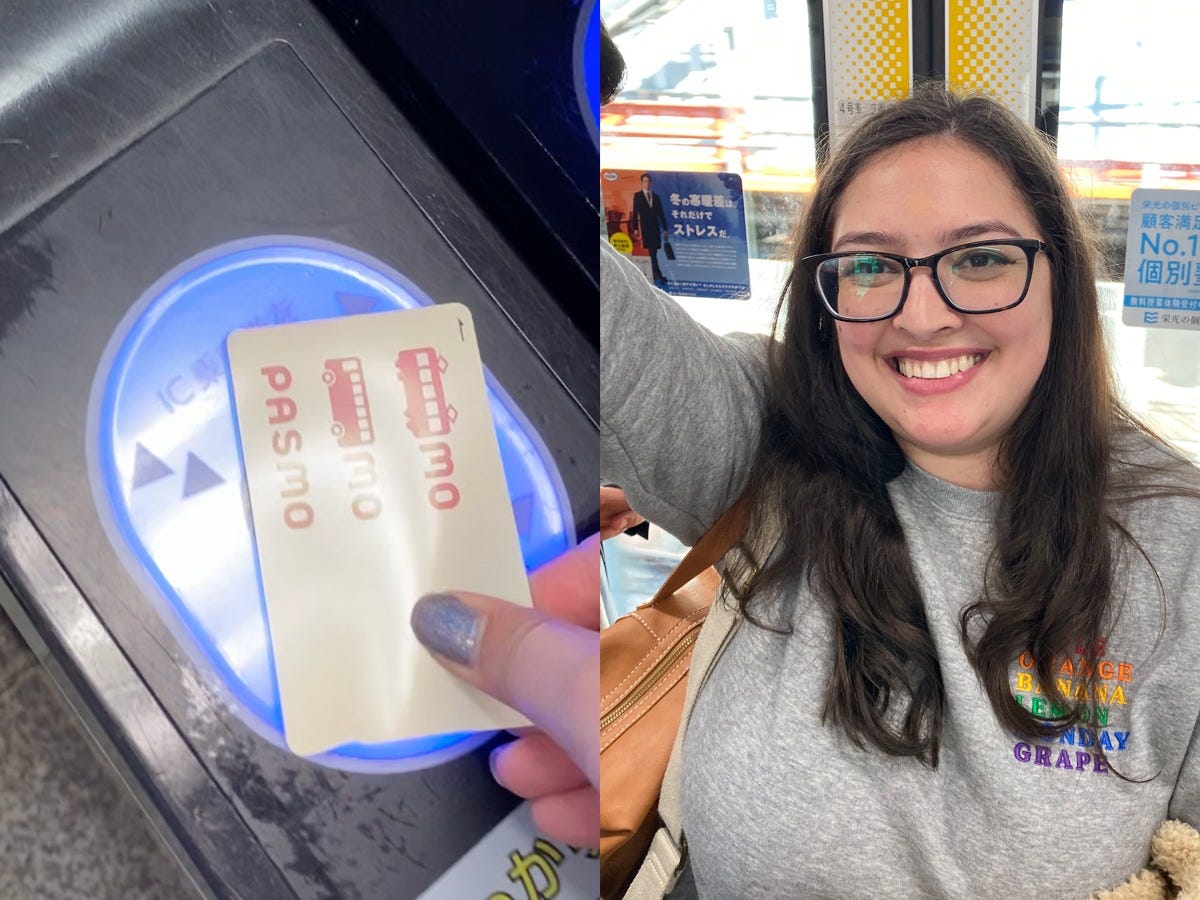 Public transportation can tell you a lot about a city, and the Tokyo subway system – which is primarily made up of the Tokyo Metro and the Toei Lines – was clean, efficient, and easy to navigate even though I don’t speak or read Japanese.

On my first trip to Tokyo, Japan, I took the subway from Haneda airport to my hotel in Shibuya with hardly a hiccup. The subway, which has operated since 1927, has had nearly 100 years to perfect itself, and it’s incredibly efficient to use as a tourist.

Here’s what it was like to ride the subway in Tokyo, and why other cities around the globe should take note.

You can buy a refillable card to ride the trains. 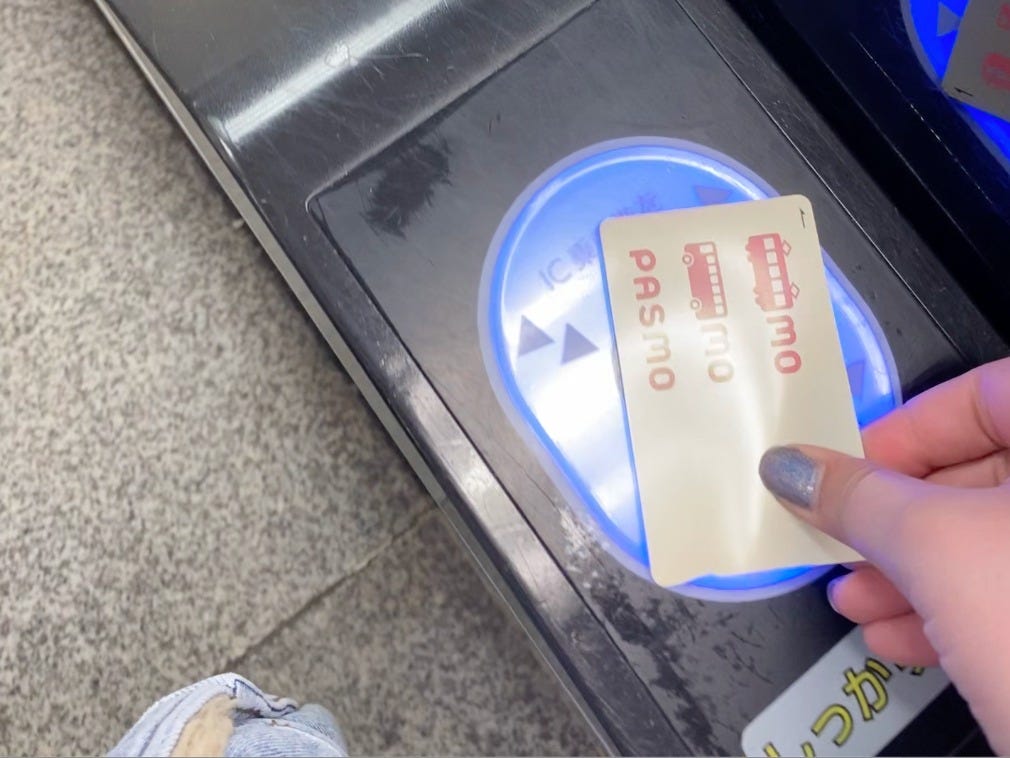 Martha Sorren for InsiderI purchased a rechargeable card to ride the subway in Tokyo.

I opted for a Pasmo card because it allows you to transfer between the two independently operated Metro and Toei lines. It can also be used on the city buses.

It cost me 500 Japanese yen (about $US4.54 at the time) to buy a new Pasmo, but that price is refundable when you finish using the card and return it at the end of your trip.

The card is refillable at any station kiosk, and you simply tap it to enter and exit the station. Unlike in some other cities, I didn’t have to infuriatingly swipe a flimsy paper card at just the ride speed.

Fares are calculated based on distance, and children get a discount. 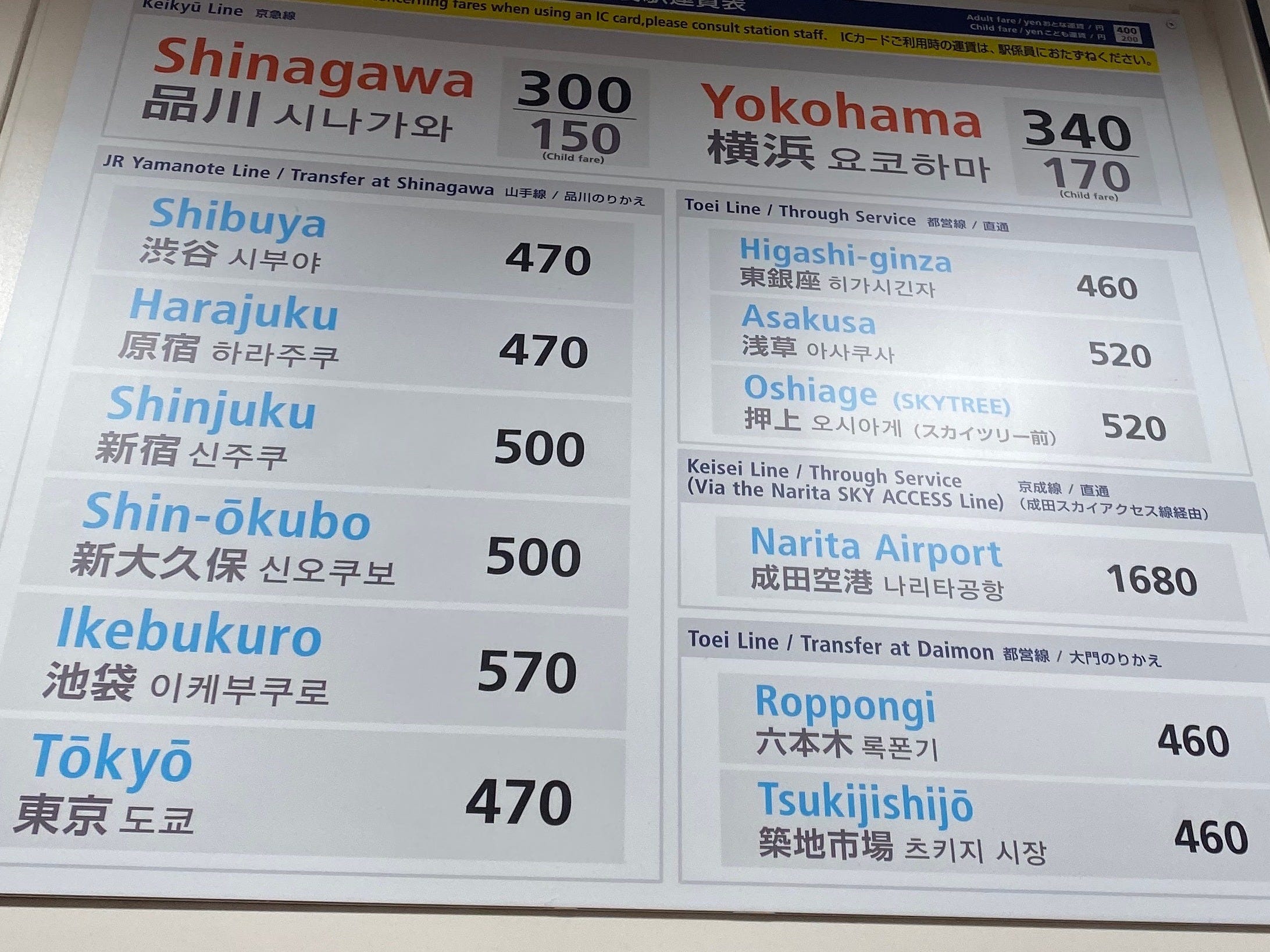 Martha Sorren for InsiderThe subway fares were reasonable in Japan.

Some subway systems around the world utilise a flat fee for all riders, but the Tokyo system is priced based on distance.

Although I didn’t have any children with me, I noticed there were discounts for kids.

Infants ride for free, toddlers ages 1 to 6 ride for free as long as there are no more than two toddlers per adult or child, and children ages 6 to 11 (or a third toddler) ride for about half of an adult fare.

Google Maps is super helpful when it comes to deciding which train to take. 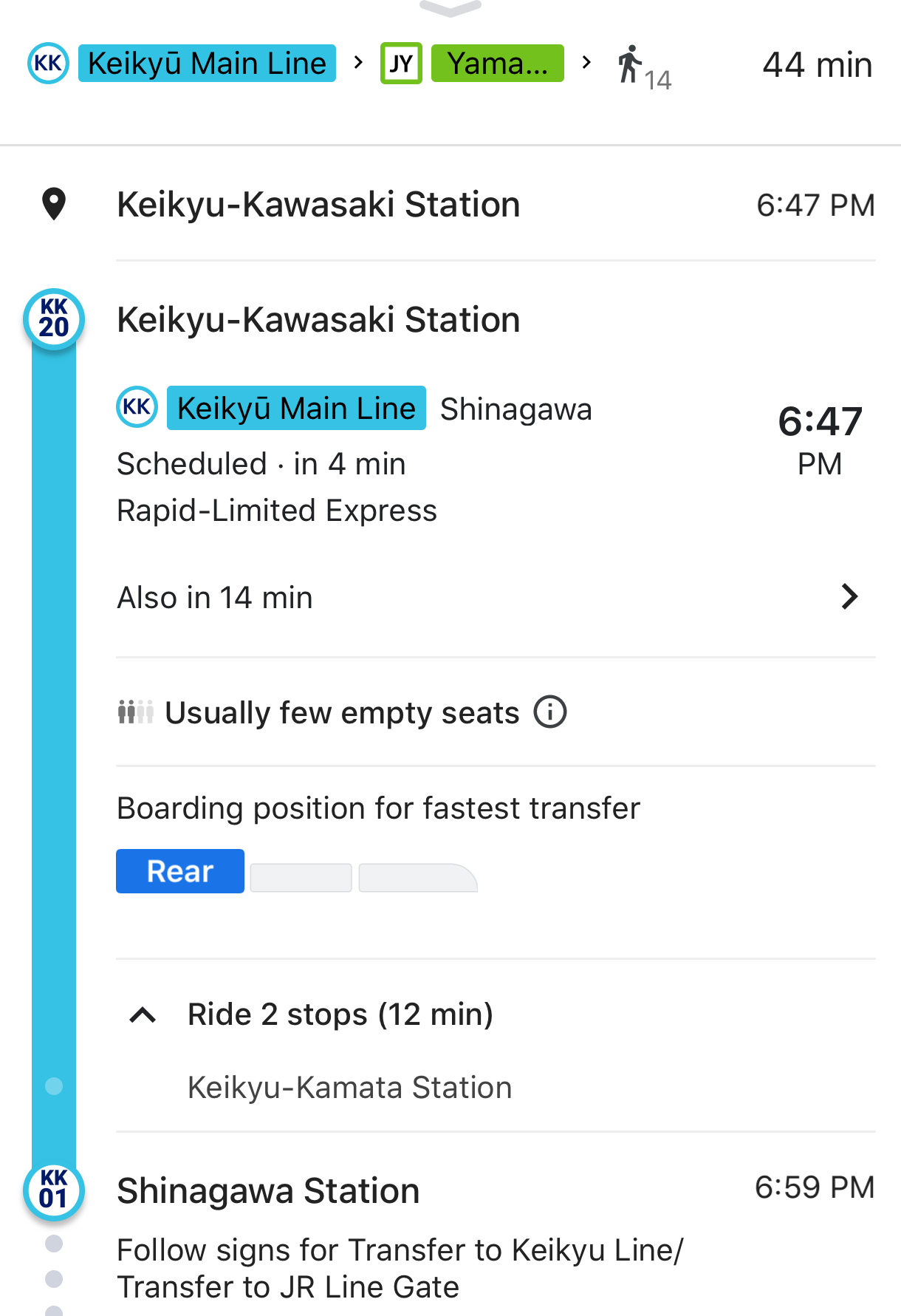 Martha Sorren for InsiderGoogle Maps will provide a lot of information regarding train times.

The most confusing thing about the Tokyo subway system is that multiple train lines run on the same platform. You have to pay close attention to the time your train is scheduled so you get on the right one.

This was the one mistake I made when travelling from the airport. I got on an express train that didn’t stop at the station I needed to transfer at. But that could have been avoided if I had paid better attention to which train I was supposed to board in the first place.

When you enter your destination into Google Maps, it will tell you the time your train is coming, which car to get on for the easiest exit or transfer, and even how likely it is that you’ll get a seat.

There’s free Wi-Fi at many of the subway stations, so pulling up this information should be relatively hassle-free.

In my experience, the trains almost always run on time. 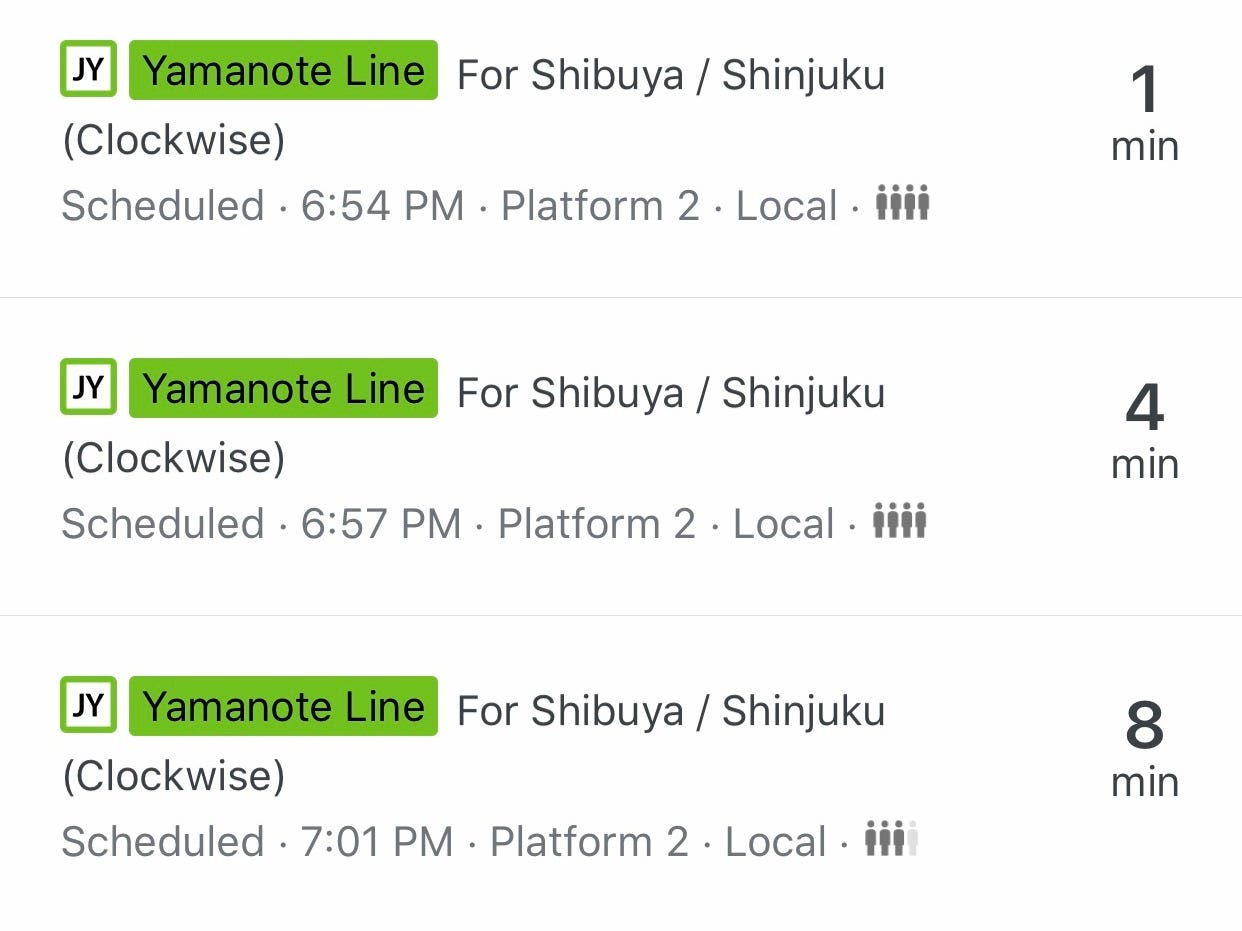 Martha Sorren for InsiderThe trains seem to run on a tighter schedule than some other systems I’ve ridden.

It was sort of unbelievable, especially as a former New Yorker, to see a subway system run with such accuracy. There were also new trains every three or so minutes, so if you missed one, another was right around the corner.

The tight schedule is a point of pride for Tokyo. Tokyo Metro’s public-relations manager, Noboru Ishikawa, told Metro magazine in 2019 that avoiding delays is the subway system’s no. 1 priority.

All of the signs are in English and Japanese. 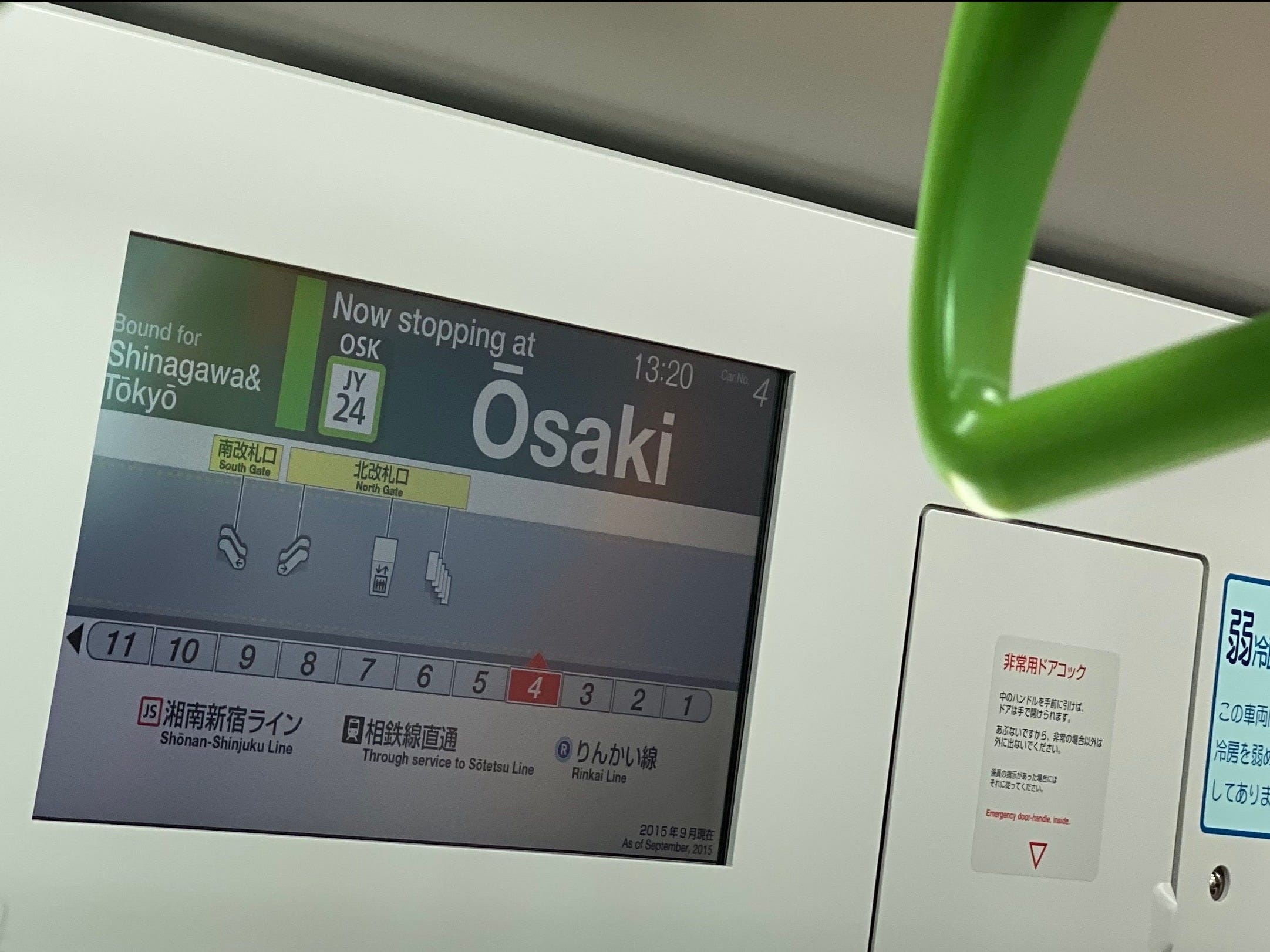 Martha Sorren for InsiderIt’s OK if you don’t speak Japanese because the signs are also in English.

If you don’t have access to Google Maps, navigating the trains is still fairly easy.

All of the stations have visible maps that are easy to find, and they are labelled in English as well as Japanese, so I didn’t have to worry about not speaking the native language.

In the cars themselves, digital screens also show upcoming stops and transfer stations in English.

Many of the stations have helpful queue lines on the ground. 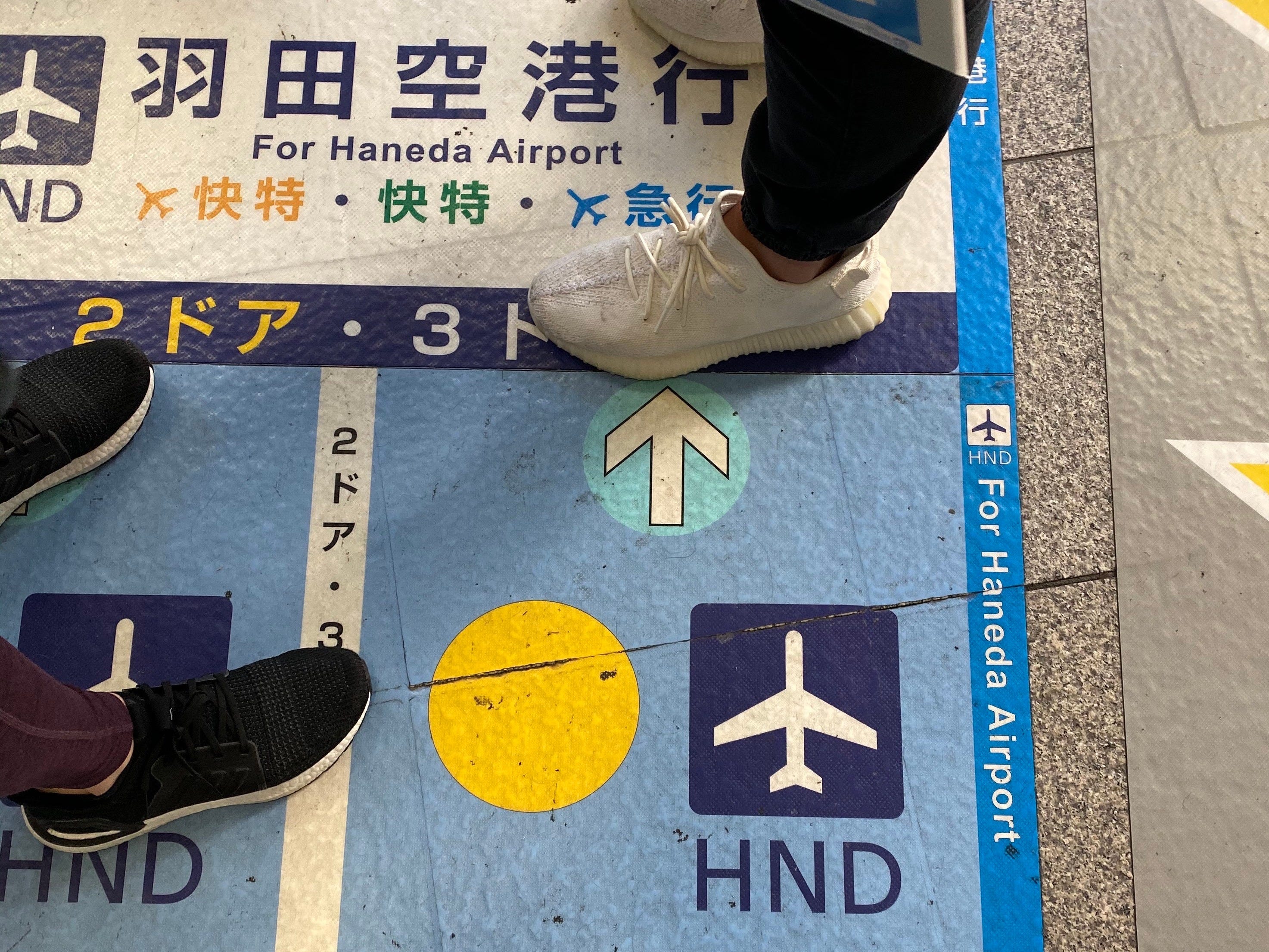 Martha Sorren for InsiderThe queue lines made getting on the train less chaotic.

The New York City subway can become a mad dash when it comes to getting on an approaching train, especially during rush hour.

In Tokyo, however, there are labels on the ground that show you where to line up – and people respect those queues.

The queue signs are also helpful to show you which trains stop at the platform. For example, I stood in the line for the train that runs to the airport, and it was clearly labelled on the ground.

The subway has a few specially designated cars that only women can ride. 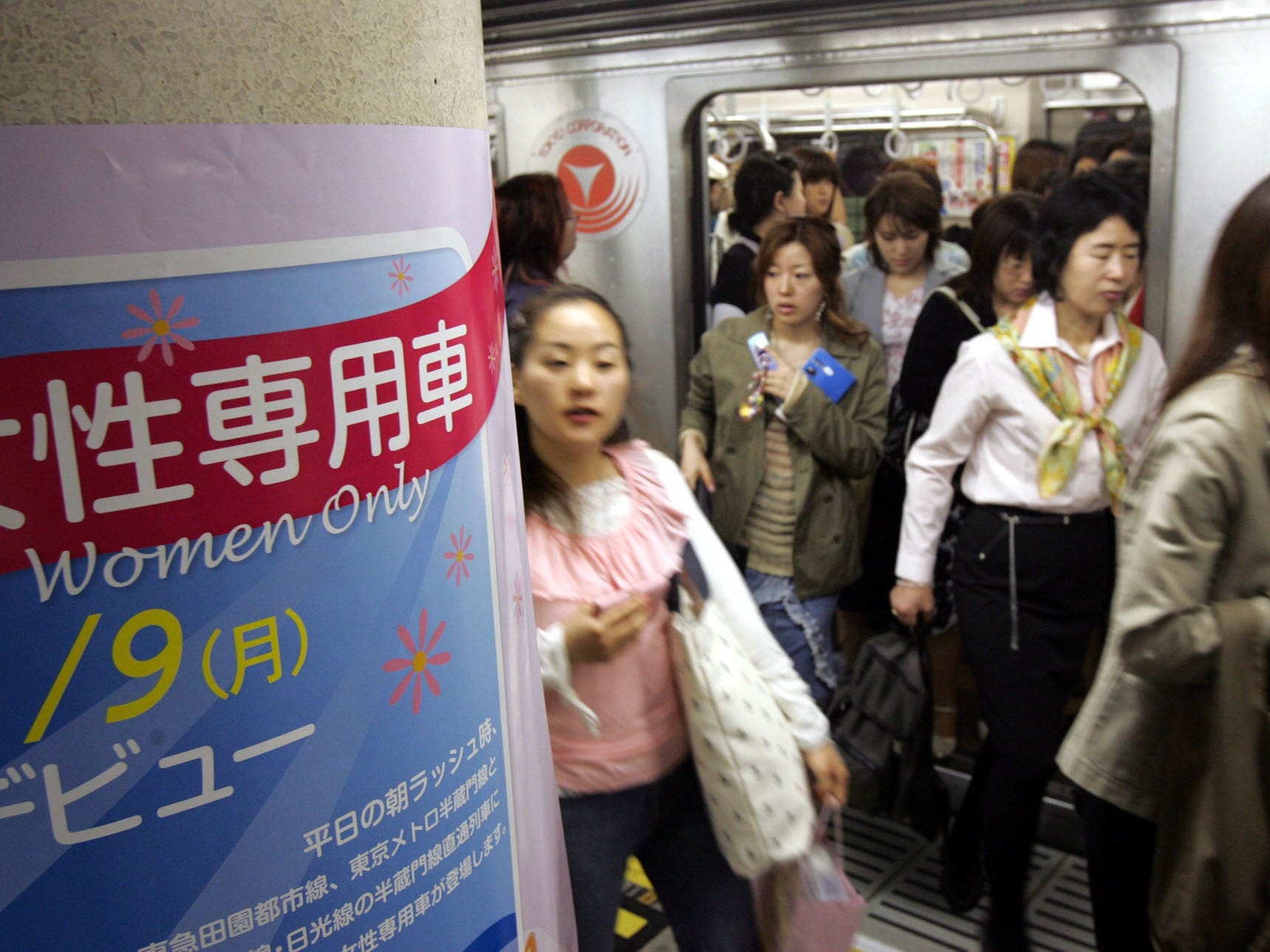 AP Photo/Katsumi KasaharaThe cars are designed to make women feel safer when riding the subway alone or with their children.

I didn’t come across any of these women-only cars myself, but they’re designed to be used during the morning rush hour to help women feel safer boarding and riding a crowded train. Younger children are also allowed to use these cars.

In every car, there’s a priority seating area. 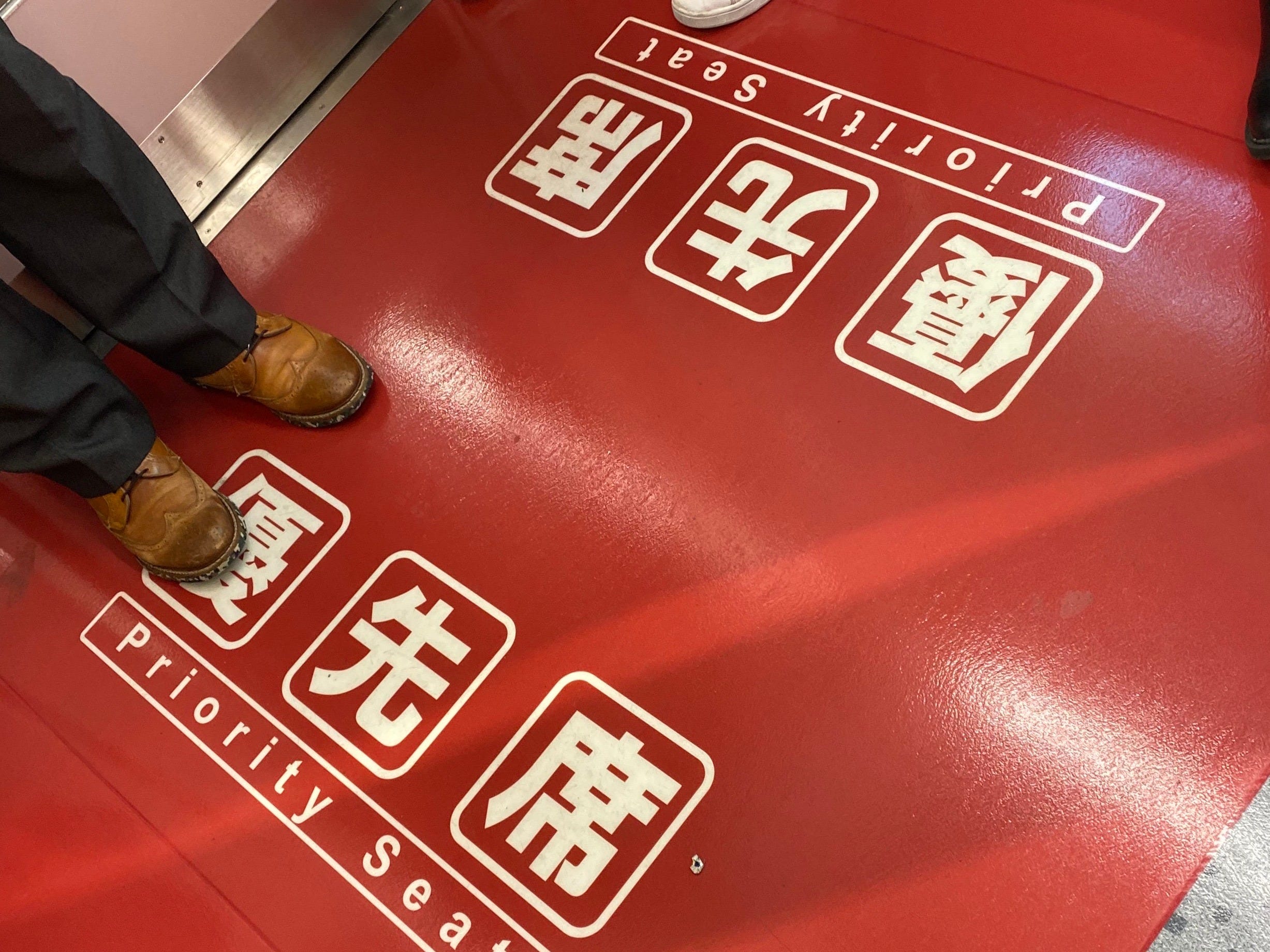 Martha Sorren for InsiderPriority seating is clearly marked in each car.

This area is generally used for older passengers, people who are pregnant, and people with disabilities. It’s marked with red paint on the floor, and there are yellow handles to hold on to in the section.

But even the general seating area is clean and comfortable. Unlike some subways that use hard, plastic seats, the ones on the Tokyo trains were comfortable and plush. I especially appreciated them during the 45-minute ride to my hotel.

There are storage shelves above the seats for your bags. 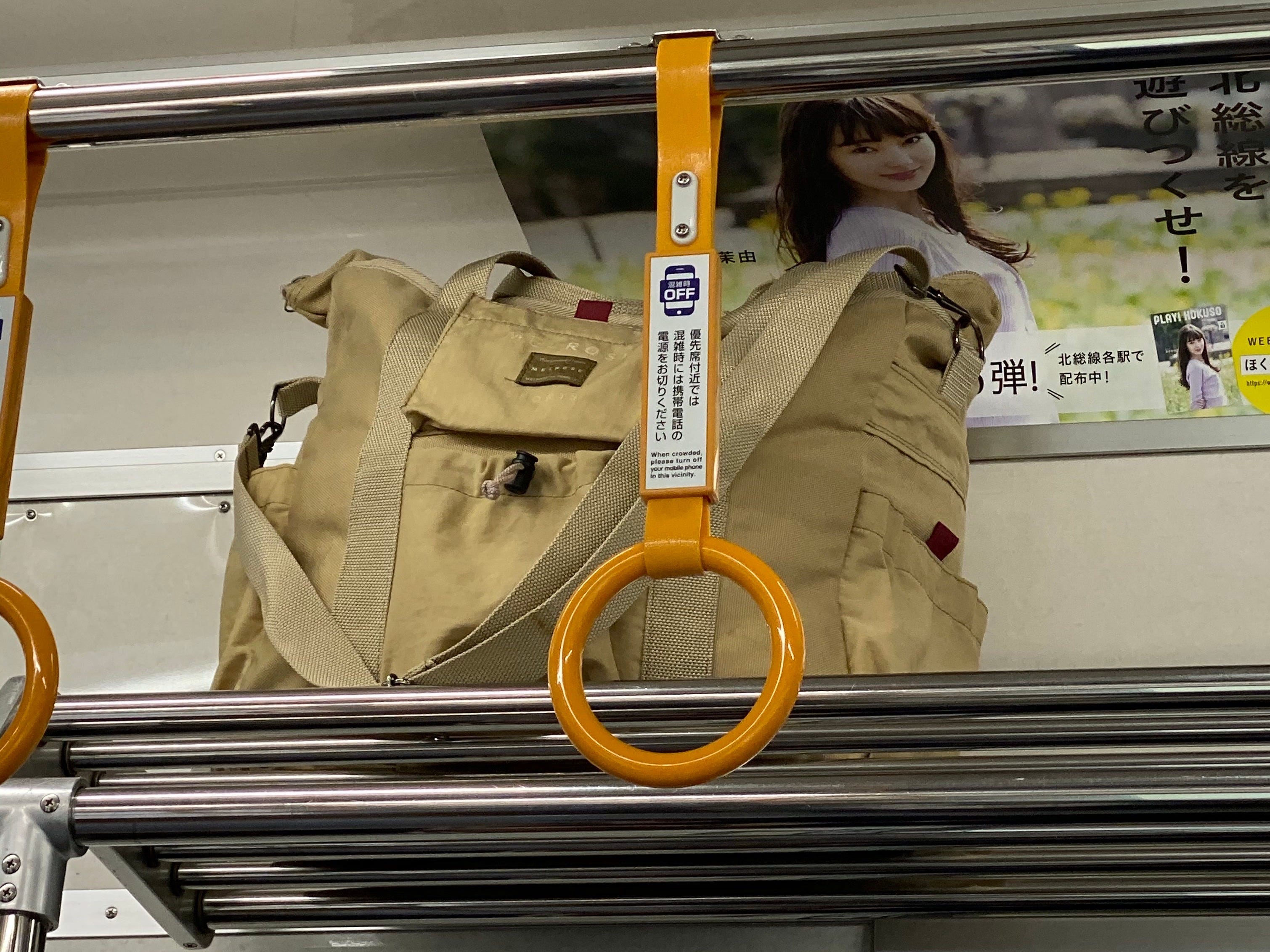 Martha Sorren for InsiderBags don’t have to sit in the aisles or take up extra space in the car.

This helps to keep the aisles clear so more people can board without tripping over bags. Also, this way, no one gets hit in the face with a backpack.

In general, I also noticed people were very courteous, especially on crowded trains.

Although there’s no rule against eating or drinking, most people seemed to avoid doing so out of respect for those around them. And even though many of the trains run above ground, people didn’t use their phones to make calls or play music or videos out loud.

It was a pretty quiet and respectful way to travel.

Overall, the system was easy to navigate even though it was my first time riding it. 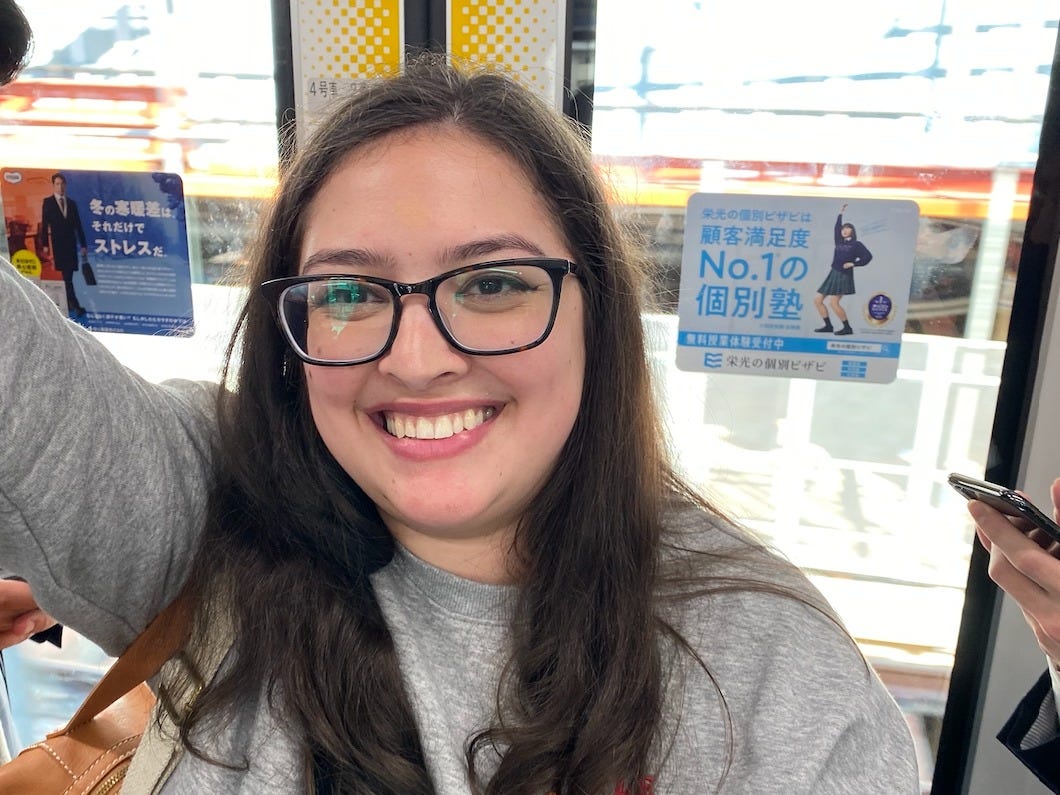 Martha Sorren for InsiderI had a positive experience riding the subway in Tokyo, Japan.

For me, the biggest highlight of the subway was how punctual it was and how easy it was to navigate.

I don’t speak Japanese and it was my first time in Tokyo, but I was able to get around without any major problems.

I think someone in Japan ought to tell New York City how public transit should be done.