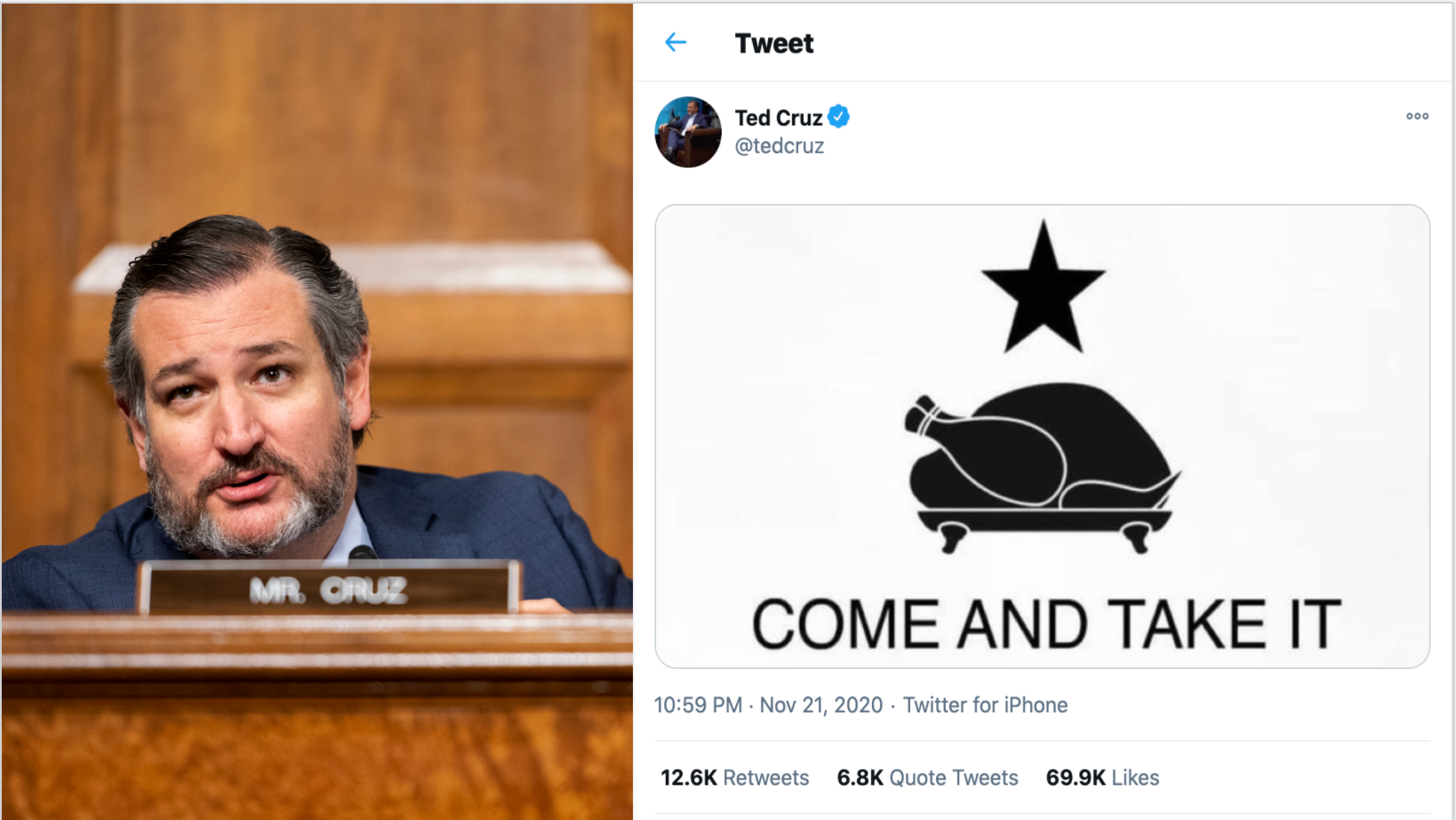 Sen. Ted Cruz tweeted out a graphic on Saturday that suggested he would not alter his Thanksgiving plans, despite recommendations from health officials to avoid or limit in-person gatherings this year due to rising coronavirus cases.

The graphic shows a turkey with a star representing Texas above it and the words “come and take it” below it.

Twitter users characterised his post as offensive, taking it to mean that the senator is refusing to ease up on his own holiday plans while his home state of Texas struggles to respond to surging coronavirus cases.

In one Texas city, the morgues can’t keep up with the rate of dying people. In an attempt to alleviate some of the pressure, the state government decided to send in the National Guard to El Paso to process bodies.

CNN reported that thousands of people in Texas last weekend waited in line to receive food rations and groceries for the holiday. The pandemic, which has shuttered small businesses nationwide and forced millions of Americans to live off unemployment benefits, has made it difficult for families to consistently put food on the table.

“Forty per cent of the folks coming through our partners’ doors are doing so for the first time,” Anna Kurian, a spokesperson for North Texas Food Bank, told CNN.

And KVUE, an ABC affiliate, reported that 135 counties in the state are at a high-risk level, which could be cause for a necessary stay-at-home order.

Health officials have for weeks cautioned that cases will rise through the holiday season, as families and friends gather in large, in-person groups.

Among those sounding the alarms is the nation’s top infectious disease specialist Anthony Fauci.

“If you have people like elderly, or individuals who are compromised because of underlying conditions, you want to take a couple of steps back and say, is it worth it for this year to bring those people together when you don’t know what the status of everybody in that pod that you’ve created is?” he said last month in conversation with the peer-reviewed JAMA.

“If you look around the country now, many of the infections are in small family and friend gatherings, such as dinner parties and small social gatherings,” he added.

His concerns are backed up by the Centres for Disease Control and Prevention, which is urging Americans to make alternative Thanksgiving plans like hosting a virtual gathering or delaying travels.

Cruz has previously skirted safety measures against the spread of the coronavirus, such as wearing a mask. He was photographed mask-less on a flight in July.

More recently, Cruz mocked a Senate colleague for asking another colleague to wear a mask while speaking. Sen. Sherrod Brown of Ohio asked Sen. Dan Sullivan to put on a face covering on the Senate floor last week.

“This is idiotic. @SherrodBrown is being a complete arse,” Cruz tweeted in response.

This is idiotic. @SherrodBrown is being a complete ass. He wears a mask to speak—when nobody is remotely near him—as an ostentatious sign of fake virtue.@DanSullivan_AK was over 50 feet away, presiding. Last I checked 50 feet is more than 6 feet. https://t.co/BoIGrAV7T1

Health officials and the CDC have for months been urging people to follow protective measures such as mask-wearing and practicing social distancing to limit the spread of the virus.

The disease has infected more than 12.1 million people in the United States, according to the latest data compiled by Johns Hopkins University. Of that, more than 256,000 Americans have died from it. The United States is the country that leads with both the most coronavirus cases and deaths.

Cruz’s office did not immediately respond to a request for comment.