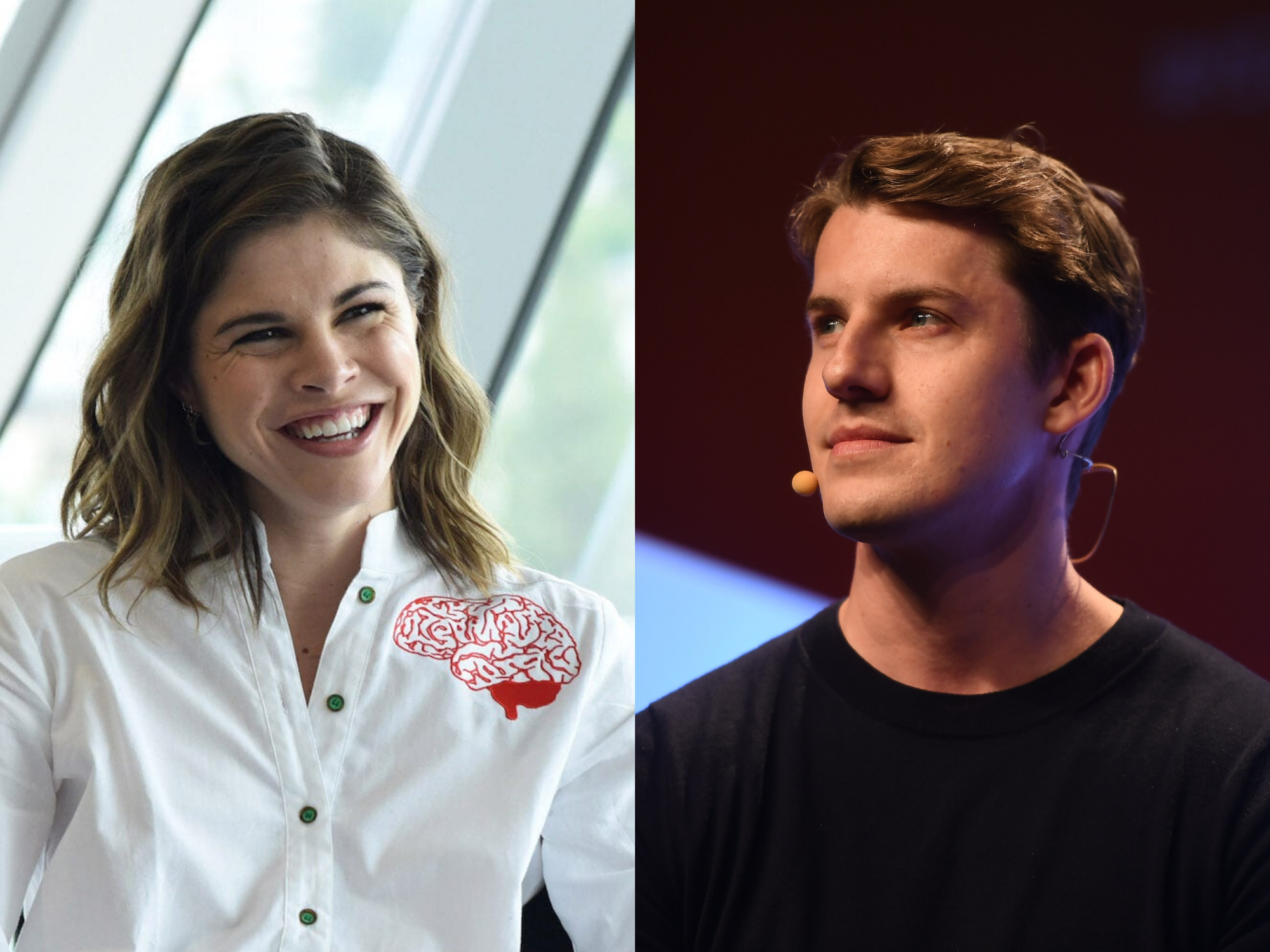 While some tech leaders, like Mark Zuckerberg, have been with their partners since college, notable figures in the tech sector have gravitated toward partners with just as much – or more! – power and pull in their industries.

The CEO and founder of Glossier, Emily Weiss, recently got engaged to her boyfriend Will Gaybrick, the chief financial officer at e-payment company Stripe. Weiss announced the couple’s engagement in a post on Instagram, where they first made their relationship public in January 2019.

But there have also been some high-profile splits in the past year that have hit some prominent tech leaders. Amazon CEOJeff Bezos and MacKenzie Bezos announced in early January that they were getting a divorce.

Here are 15 of the top power couples in the tech industry:

Emily Weiss and Will Gaybrick

So, a week ago, we got engaged. (!) Even during the wildest most uncertain times, there are silver linings. ❤️

Who they are: Weiss is the cofounder and CEO of online makeup company Glossier. Gaybrick is the chief financial officer at payment platform Stripe. Both startups are worth more than $1 billion.

“Even during the wildest most uncertain times, there are silver linings,” Weiss wrote in the caption for the Instagram photo. Thier engagement came just as the World Health Organization classified coronavirus, the COVID-19 disease, as a “pandemic.”

Who they are: Spiegel is the cofounder and CEO of Snap Inc., Snapchat‘s parent company. Kerr is one of the highest-earning models in the world, and founder of wellness company KORA Organics.

Their backstory: The couple started dating in 2015, and got married in May 2017. They have one son who was born in May 2018, and Kerr announced in October 2019 she had given birth to their second child: a baby bay named Myles.

Read more: Inside the whirlwind romance of Snap CEO Evan Spiegel and model Miranda Kerr, who are raising 3 kids together while each running their own companies

Who they are: Brin is the cofounder of Google, and currently serves as the president of its parent company, Alphabet. Shanahan is the founder of legal tech company ClearAccessIP and the Bia-Echo Foundation.

Their backstory: The couple has been linked together since 2015, when they were seen together at the star-studded wedding for a dating app CEO in Jamaica. The couple reportedly have a baby girl together who was born in late 2018, although they’ve kept information about their child under wraps.

It was revealed in October 2019 that the couple has been married since 2018, but there were no other details made public about the wedding.

Read more: Google’s Sergey Brin has secretly been married to the founder of a legal tech startup since 2018

Who they are: Kushner is the founder of VC firm Thrive Capital and cofounder of health insurance startup Oscar Health. Kloss is a prominent model who runs coding camps for young girls called Kode with Klossy.

Their backstory: Kloss and Kushner reportedly started dating in 2012. The couple got married in October 2018 in a small ceremony, then got married again in June 2019 on a ranch in Wyoming.

Read more:Everything we know about venture capitalist Josh Kushner and model Karlie Kloss, the power couple with unconventional ties to the White House

For real this time ???????? I love you forever @stewartpic.twitter.com/Dt0Yd6syDt

Their backstory: The relationship between Rubio and Butterfield has flew under the radar, but it came under the spotlight in May 2019 when Butterfield jokingly proposed to Rubio on Twitter. Butterfield’s Twitter proposal followed news that Away had landed a $1.4 billion valuation, and the Slack CEO joked he wasn’t “just a goldigger.”

Butterfield and Rubio both acknowledged the proposal was a joke after a few hours. However, it seems Butterfield had apparently been waiting for that Memorial Day weekend to propose – for real, this time. There’s no word yet on a wedding date.

Who they are: Zuckerberg is the CEO and cofounder of Facebook. Together, the couple launched the Chan Zuckerberg Initiative, a philanthropy focused on science and education.

Their backstory: The two are college sweethearts, and met in 2003 while they were students at Harvard University. The couple were married in a surprise ceremony in May 2012, the day after Facebook went public. The couple has two daughters, who were born in 2015 and 2017.

Who they are: Ohanian cofounded Reddit, then later cofounded the VC firm Initialized Capital. Williams is one of the best tennis players in the world, and ranks third on the all-time list of most winning players with 39 major tournament titles.

Their backstory: The couple met in May 2015 in Rome, and started dating that same year. They got engaged at the end of 2016 at the same place in Rome where they had first met. Williams gave birth to the couple’s daughter in 2017, and they got married later that year.

Read more:Tennis superstar Serena Williams and Reddit cofounder Alexis Ohanian have had a whirlwind few years. Here’s how the power couple met, and everything that’s happened since.

Who they are: Bill Gates is the cofounder and former CEO of Microsoft, and the second-richest person in the world. Melinda Gates cofounded the Bill & Melinda Gates Foundation with her husband in 2000.

Their backstory: Bill Gates first asked out Melinda Gates at a Microsoft company picnic after she was hired as a product manager in 1987. They dated for seven years before they got married. The couple’s philanthropic organization, the Bill & Melinda Gates Foundation, has invested billions of dollars in efforts to enhance healthcare globally and reduce poverty. The Gates’s have two daughters and a son together.

Read more:Inside the 25-year marriage of Bill and Melinda Gates, who met at work, have 3 kids, live in a $124 million home, spend $45 billion on philanthropy, and still wash dishes together every night

Who they are: Mayer is the former CEO of Yahoo, and the cofounder of tech incubator Lumi Labs. Before that, she was Google’s 20th employee. Bogue is a cofounder and managing partner at the investment firm Data Collective VC.

Their backstory: The couple met through a mutual friend in 2007, and got married two years later. Mayer announced her first pregnancy in 2012 on the same day she was publicly named Yahoo’s CEO. She gave birth to identical twin girls in 2015.

Read more:The rise and fall of Marissa Mayer, the once-beloved CEO of Yahoo now pursuing her own venture

Who they are: Marc Benioff is the founder and CEO of enterprise cloud company Salesforce, known for his philanthropic efforts to combat Bay Area homelessness. Lynne Benioff is a notable philanthropist on the board of the nonprofit ONE.

Their backstory: The Benioffs were married in 2006, although details of their Hawaiian wedding were kept secretive. In 2018, the couple bought Time Magazine together for $190 million.

Read more:The rise of Marc Benioff, the bombastic owner of Time Magazine who just became Salesforce’s sole CEO, has an $8 billion fortune, and owns a 5-acre compound in Hawaii

Who they are: David Morin helped to create Facebook Platform and Facebook Connect, and cofounded Path,a now-defunct photo-based platform. Brit Morin is the founder of Brit + Co., a popular lifestyle media company for millennial women.

Their backstory: The pair first met when they both were working at Apple years ago. They got engaged in 2011 after an elaborate proposal set in the Maldives, and got married the following year.

Read more: What’s Tough And Awesome About Being A Well-Known Couple In Silicon Valley

Who they are: Kevin Hartz and Julia Hartz cofounded the ticketing startup Eventbrite in 2006. He is currently a chairman at the company, while she serves as CEO.

Their backstory: The couple met back in 2003 at a mutual friend’s wedding. In a 2012 interview with Business Insider, Julia Hartz said that “we knew we wanted to start a company together before we lived together.” The pair got married in 2006, and now have two children.

Read more:How To Marry Your Cofounder And Not Kill Your $200 Million Startup In The Process

Who they are: Diller founded the Internet company IAC in 1995, and now serves as a chairman for that company and for Expedia. Furstenberg is a notable designer with an eponymous fashion company who first rose to fame after marrying into a royal German family.

Their backstory: The couple got married in 2001, but have had an on-and-off relationship and friendship that’s spanned more than 40 years. They first met years earlier in the 70s at a party Diller was hosting.

Their backstory: The pair started Y Combinator in 2005 while they were already dating. They got married in 2008, and now have two sons.

Read more:Paul Graham Founded Y Combinator 7 Years Ago To Create A Job For His Wife

Who they are: Greene and Rosenblum both helped found the cloud computing software company VMware in 1998. They also together cofounded the cloud startup Bebop, which Google acquired in 2015. Greene was put in charge of Google’s cloud computing unit, and now sits on Alphabet’s board of directors.

Their backstory: The couple met while attending the University of California, Berkeley, when Rosenblum gave Greene a ride on his motorcycle. They have two children together.