How tear gas and pepper spray affect the body, and what to do if you've been hit 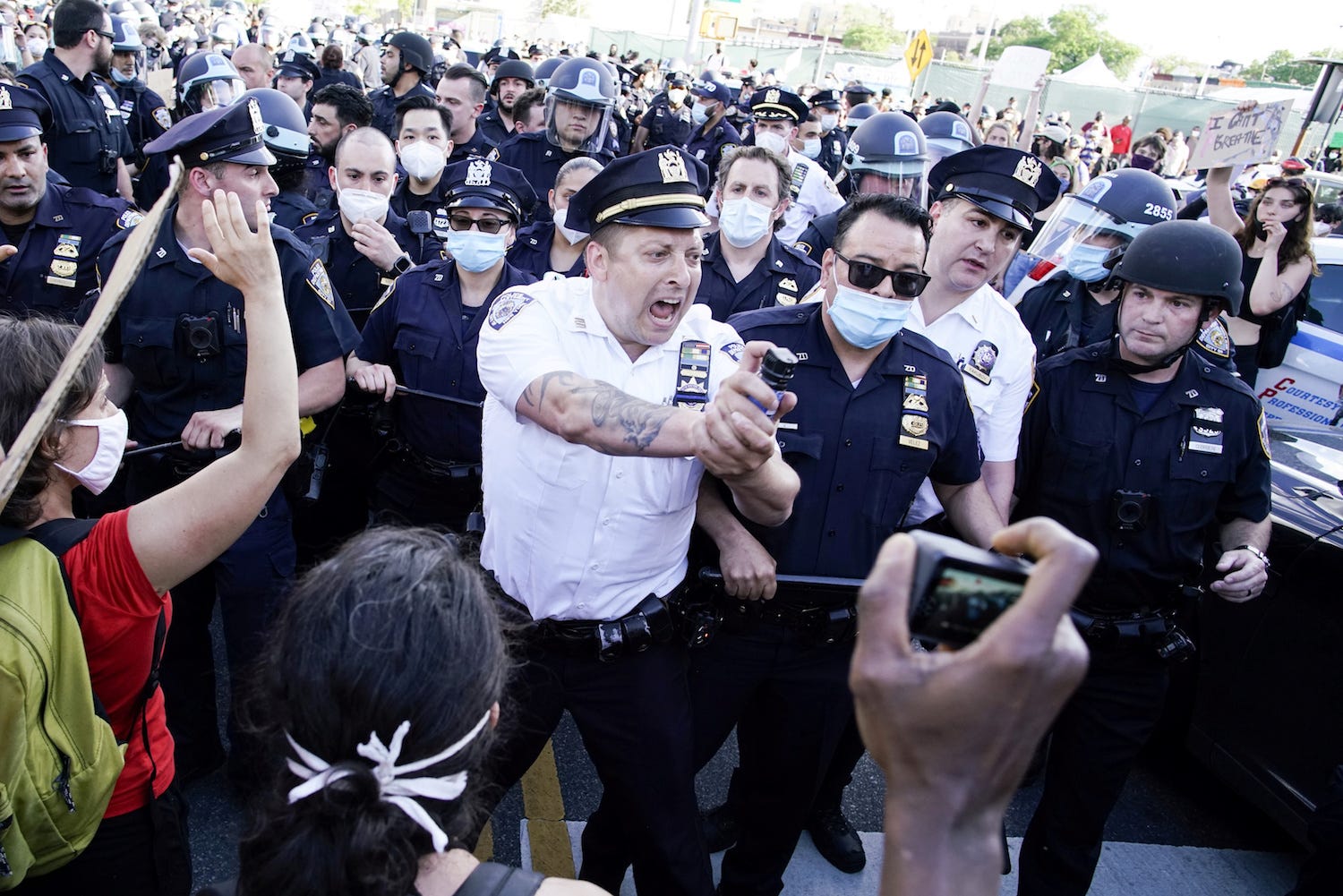 REUTERS/Eduardo MunozAn NYPD police officer sprays protesters as they clash during a march in Brooklyn, New York, May 30.

Tear gas and pepper spray have both been used to quell crowds over the past week as they march in cities across the US to protest police brutality.

The two substances, known officially as “agent CS” and “agent OC” don’t typically cause permanent injuries, but they are both acidic substances which are harmful to people’s health – and could be especially so during the coronavirus pandemic.

When tear gas or pepper spray are dispersed in a crowd, it can lead to mass chaos as people scramble for fresh air. That means people are running, screaming, touching each other, and coughing, all of which can easily spread a virus.

Some people have experienced coughing and chest pains for days and weeks after exposure to the chemicals. Tear gas and pepper spray can be especially dangerous for people with asthma and other reactive lung disorders since the irritants can prompt an attack.

In some cases, tear gas and pepper spray can cause serious long-term damage

In addition to the lung, nose, and eye irritation that the chemical irritants can cause, there is a risk of impalement, and in extreme cases even death, from the containers that the substances are ejected from. One protester recently had his eye taken out by a tear gas canister, and pepper balls, if targeted at a person’s face or neck, can also do serious harm.

When deployed at very close range to the eyes, pepper spray can lead to nerve damage or corneal erosion, while large quantities of tear gas can burn the skin.

Usually, though, the chemicals just hurt for a while.

Howie Mell, an emergency room physician in Missouri who is a spokesperson for the American College of Emergency Physicians, says that being tear gassed (as he was once during a SWAT training) felt like “one of the longest 15 minutes of my life.”

If you are hit by tear gas, the most important thing to do is leave the area where the irritant is spreading and seek fresh air. Then, rinse out your eyes with cool water, making sure to take out contact lenses, which can trap more irritant underneath them. Wash your hands and your body, too.

“In practice, really the only two things that reliably work is time, or high volumes of water, and just lots and lots of it,” Mell said. “The problem being – as far as in the street, so to speak, you need more water than you’re going to have.”

Milk isn’t sterile, so rinsing your eyes with it could lead to an infection

Pepper spray, or mace, is slightly different from tear gas. It employs the exact same active chemical as what’s found in cayenne peppers, and since it is an oil, “even small concentrations of it can penetrate the skin and enter mucous membranes, causing severe and prolonged discomfort,” according to the American Civil Liberties Union.

That’s why some protesters carry around bottles of antacid mixed in milk, hoping to neutralise these acidic chemicals.

“That comes from folks who cook with very hot peppers,” Mell said, who “very often keep milk on hand to neutralise the peppers.”

While experts don’t think the creamy mixture is necessarily harmful, and that it might even help a little in the case of pepper spray, it won’t do much for a tear gas attack. It also may not be a good idea to rinse your eyes out with milk because it’s not sterile and could prompt an infection.

Instead, just keep dousing your eyes. Winslow even suggested grabbing a nearby garden hose.

“Unfortunately, there really isn’t an easier way to do it,” Mell said.

There is not much you can do to stop the burning, either. Instead, “allow the tears to happen,” or even blink rapidly to flush the eyes out, the doctor said.

“Do not rub your eyes, do not,” he said. “Let your eyes tear up, let your eyes wash themselves, as best you can. And then as soon as possible, wash with copious amounts of water.”

With time, and lots of fluid, most injuries will subside in around 90 minutes. If they don’t, Mell urged people not to shy away from visiting their local emergency department.

“If you’ve gotten exposed, and it’s seeming to last longer than it should, or you’re afraid that you’re suffering an allergic reaction, or an asthma reaction, please don’t hesitate to come to the ER,” he said. “This is a strenuous time that we’re living in for everyone. We just want to make sure that people know that we’re definitely there to help.”