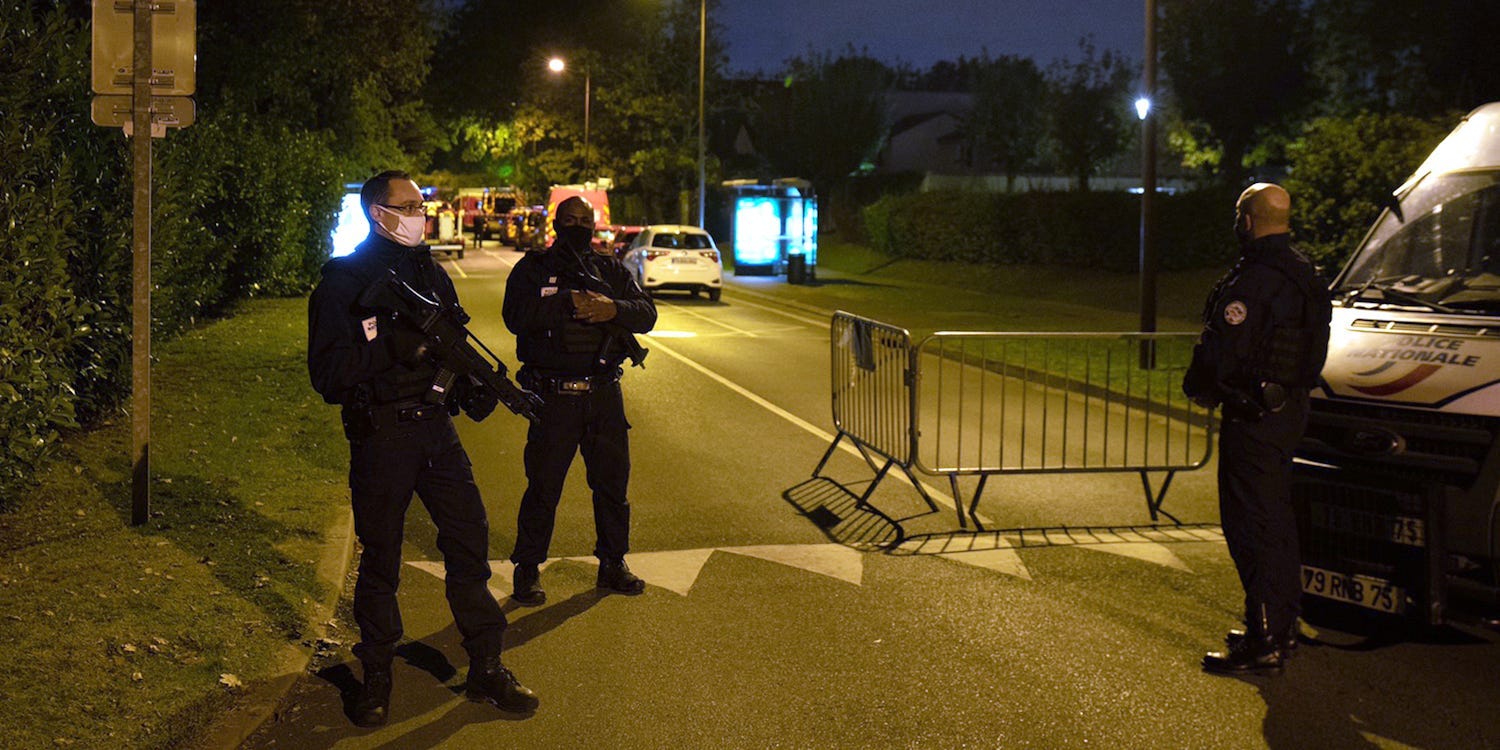 Abdulmonam Eassa/AFP via Getty ImagesFrench police officers stand guard a street in Eragny on October 16, 2020, where an attacker was shot dead by policemen.

A teacher who had shown his class highly controversial cartoons of the Prophet Muhammad was decapitated in a Parisian suburb on Friday afternoon, in what President Emmanuel Macron has called an “Islamist terrorist attack.”

French police shot dead an 18-year-old man who allegedly beheaded the teacher â€” who has since been named as Samuel Paty â€” with a large kitchen knife near a school in a residential suburb of Conflans-Sainte-Honorine.

According to a police source, witnesses had heard the knifeman shout “Allahu Akbar” (“God is Greatest “) as he attacked the teacher, Reuters reported. He is also said to have shared photos of the attack on social media.

The 47-year-old history and geography teacher had shown his pupils, aged 12 to 14, caricatures of the Prophet Muhammad from the satirical newspaper Charlie Hebdo that many Muslims found highly offensive

The lesson was part of an obligatory “moral and civil education” course that all primary and secondary French schools have in their curriculum.

Visiting the scene shortly after the attack, Macron said Paty was a “victim of an Islamist terrorist attack” killed because he “taught the freedom of expression, of believing and not believing,” according to Sky News

“This was a cowardly attack on our compatriot. They won’t win…We will act,” the French president added, the BBC reported.

The 18-year-old knifeman, who has not been named, was born in Moscow and is said to have had Chechen roots, according to the Associated Press (AP). He fled after the attack but local police confronted him in the nearby area of Ã‰ragny.

After police ordered him to give himself up, the knifeman is said to have threatened them, prompting them to shoot at him ten times. The suspect, who had a petty criminal record and was not known to the country’s intelligence service, died shortly after.

Nine people, including the suspect’s grandfather and 17-year-old brother, have been questioned by police on Saturday.

The history teacher’s lesson had sparked complaints from several parents. One family lodged a legal complaint while another parent posted a YouTube video after the lesson complaining about the teacher.

In response, another parent wrote a comment below the video on Friday, defending the teacher.

“I am a parent of a student at this college. The teacher just showed caricatures from Charlie Hebdo as part of a history lesson on freedom of expression. He asked the Muslim students to leave the classroom if they wished, out of respect â€¦ He was a great teacher. He tried to encourage the critical spirit of his students, always with respect and intelligence,” the parents wrote, according to the Guardian.

“This evening, I am sad, for my daughter, but also for teachers in France. Can we continue to teach without being afraid of being killed?” the parent added. The video has now been removed.

France has suffered a wave of Islamist violence since the terrorist attack on the Charlie Hebdo headquarters in 2015 that left 12 people dead. A trial over the Islamist assault is currently underway in Paris.

Three weeks ago, two journalists from a production company were stabbed and seriously injured outside the satirical magazine’s former offices.

Charlie Hebdo responded to Friday’s attack on its Twitter account, writing: “Intolerance has crossed a new threshold and does not seem to give ground to anything in imposing its terror on our country.”

Note: This article has been updated to include the victim’s name.