I tried making the divisive banana-peel curry, and my friends didn't even notice the special ingredient 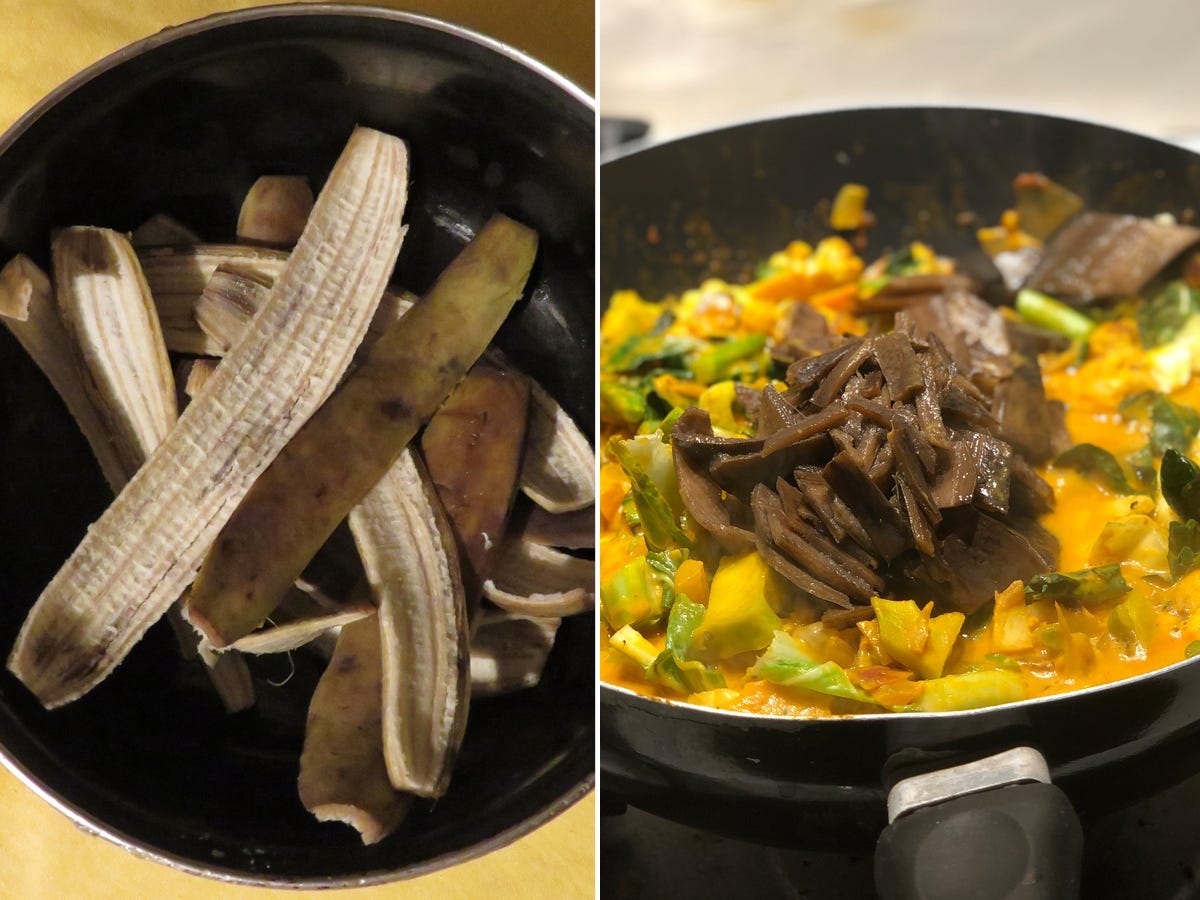 Banana bread is pretty great â€” but after you make it, what do you do with all of the peels?

On her BBC-Two TV series “Nigella’s Cook, Eat, Repeat,” Lawson made a cauliflower-and-banana-peel curry, and the internet was both intrigued and appalled.

Fans took to Twitter to voice their concerns, which prompted Lawson to respond to the scepticism, tweeting, ” … I hope I didn’t traumatise you too much with the banana skins (I promise you the curry is divine) … “

But Lawson is far from the first cook to use banana peels in her recipes â€” it’s a common ingredient in meals around the world.

Banana skin is a popular addition to Keralan dishes like thoran, a stir-fry made with spices and coconut. And in Brazil, these skins have long been used as a meat substitute in street foods such as casca louca, which translates to “crazy peels.”

Inspired by Lawson’s cooking show and the rapidly browning bananas in my home, I tried making the divisive curry. Read on to see how it turned out.

The bananas should be ripe for this recipe 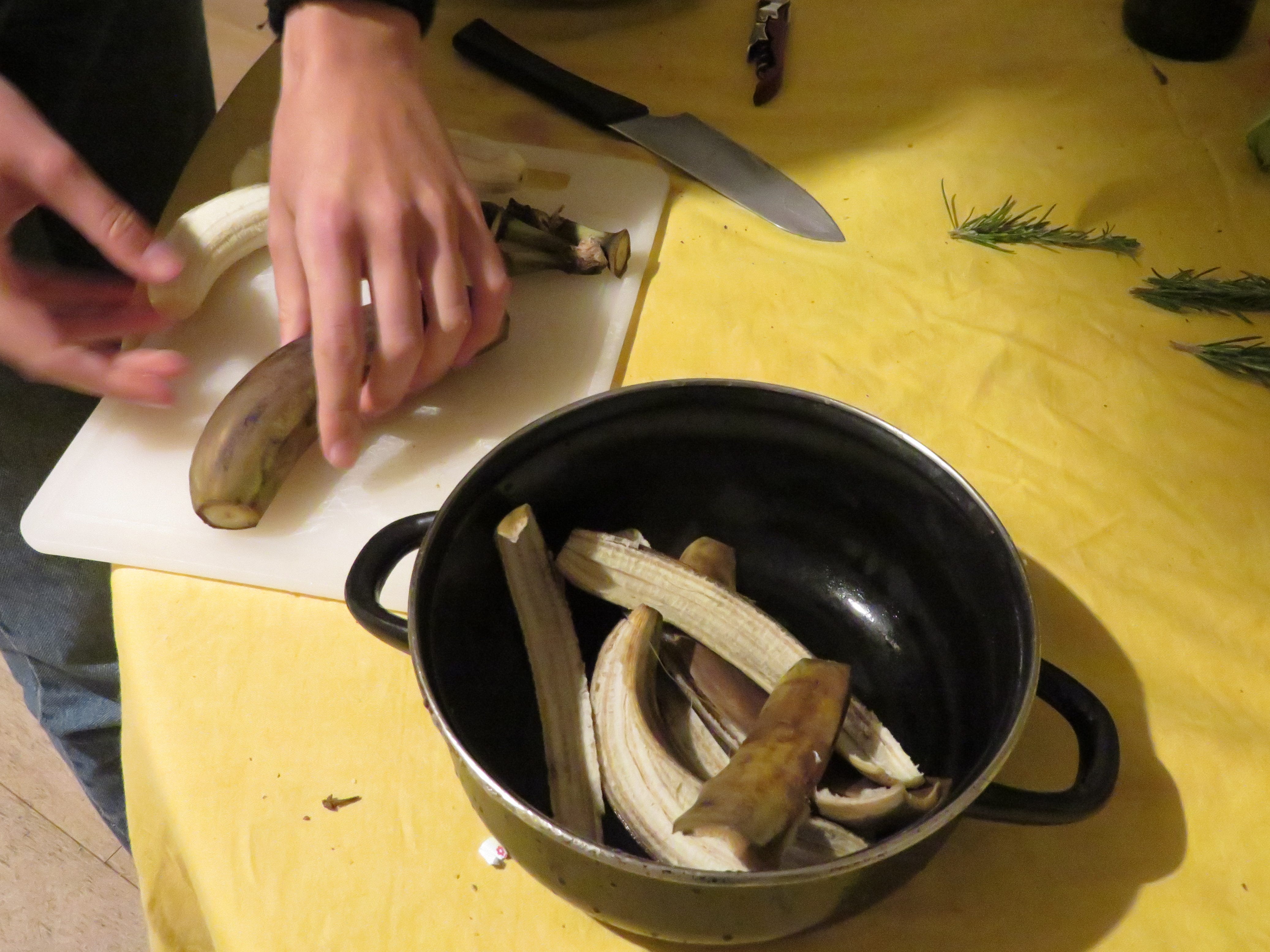 May Bertorelli for InsiderMake sure not to waste the actual fruit — bananas store well in the fridge.

Before I did anything, I peeled the three overripe bananas I had at home and put the fruit in the fridge to eat at a later date.

I chopped the ends off, then put the peels into a saucepan and poured freshly boiled water over them with a sprinkle of salt. 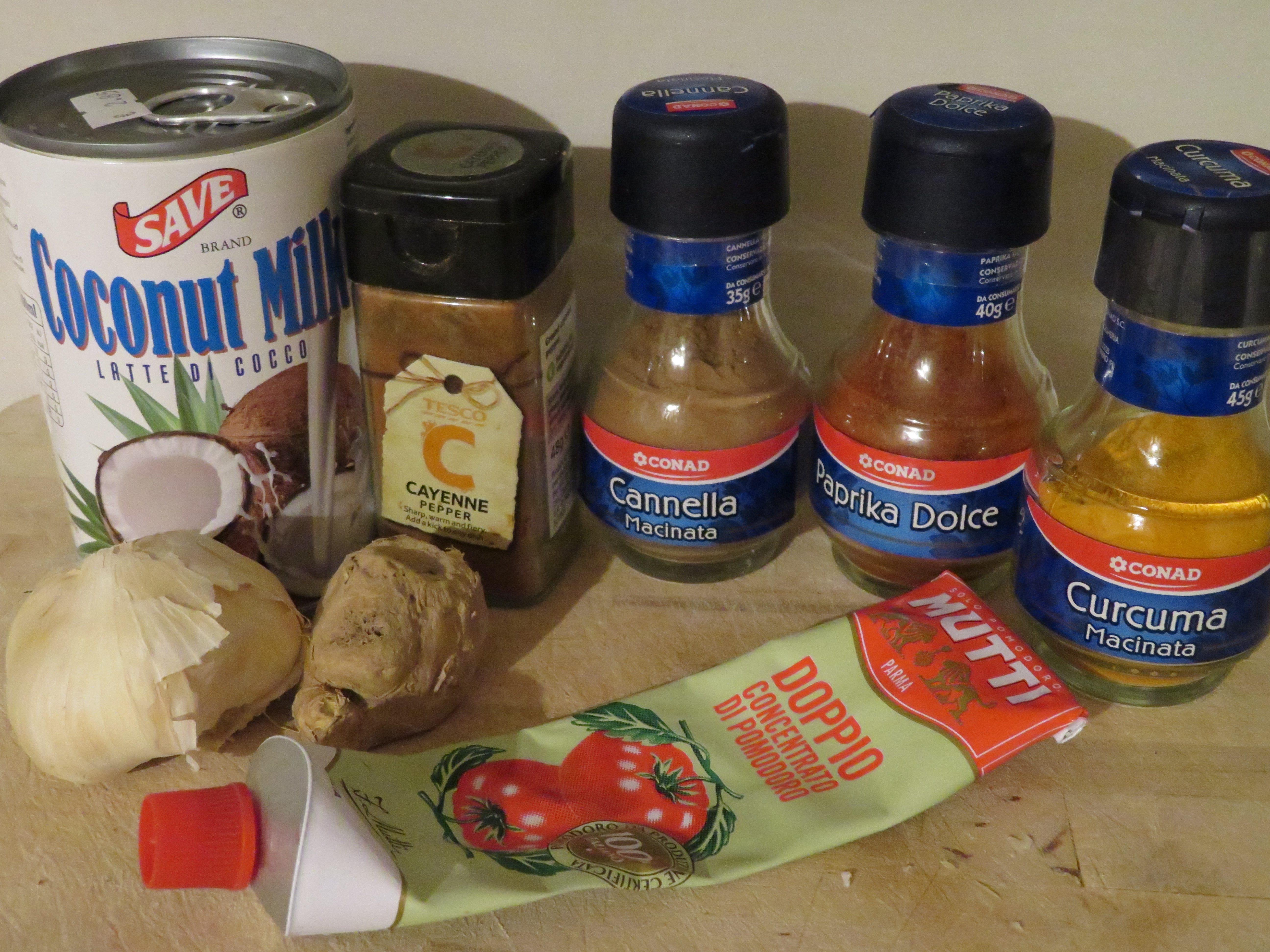 May Bertorelli for InsiderThe required ingredients.

I was pretty liberal with a hefty tablespoon of turmeric. I also threw in a sprinkling of sweet paprika and cayenne pepper, which I found in my cupboard.

It would have been nice to play around with some more spice combinations â€” next time, I’ll probably fry some fennel and cilantro seeds to make the curry more fragrant and flavorsome. 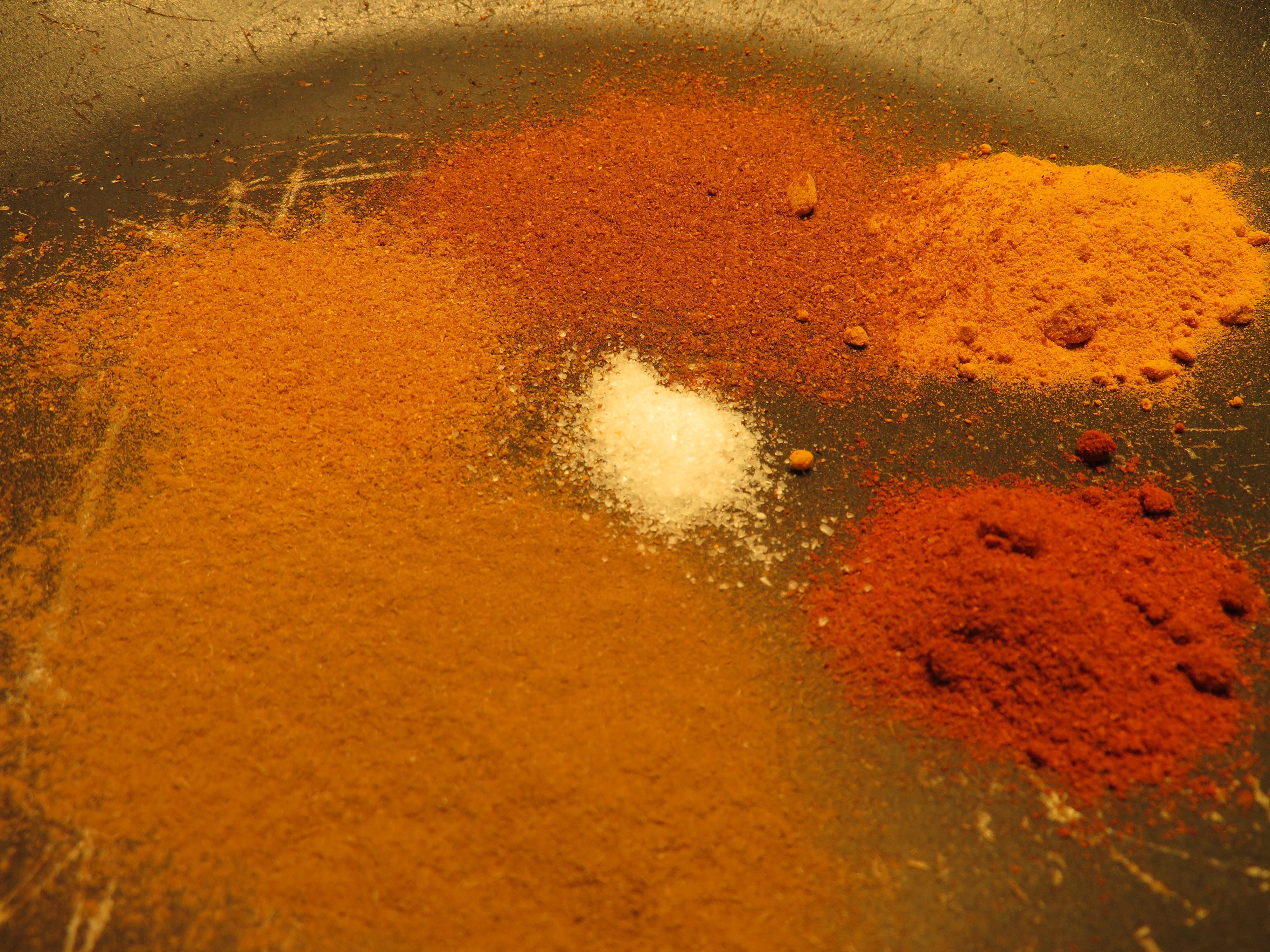 May Bertorelli for InsiderCook the spices without oil first to bring out their flavours.

I dry-fried the spices before adding the oil, which helped bring out their nuances.

Then I moved on to chopping 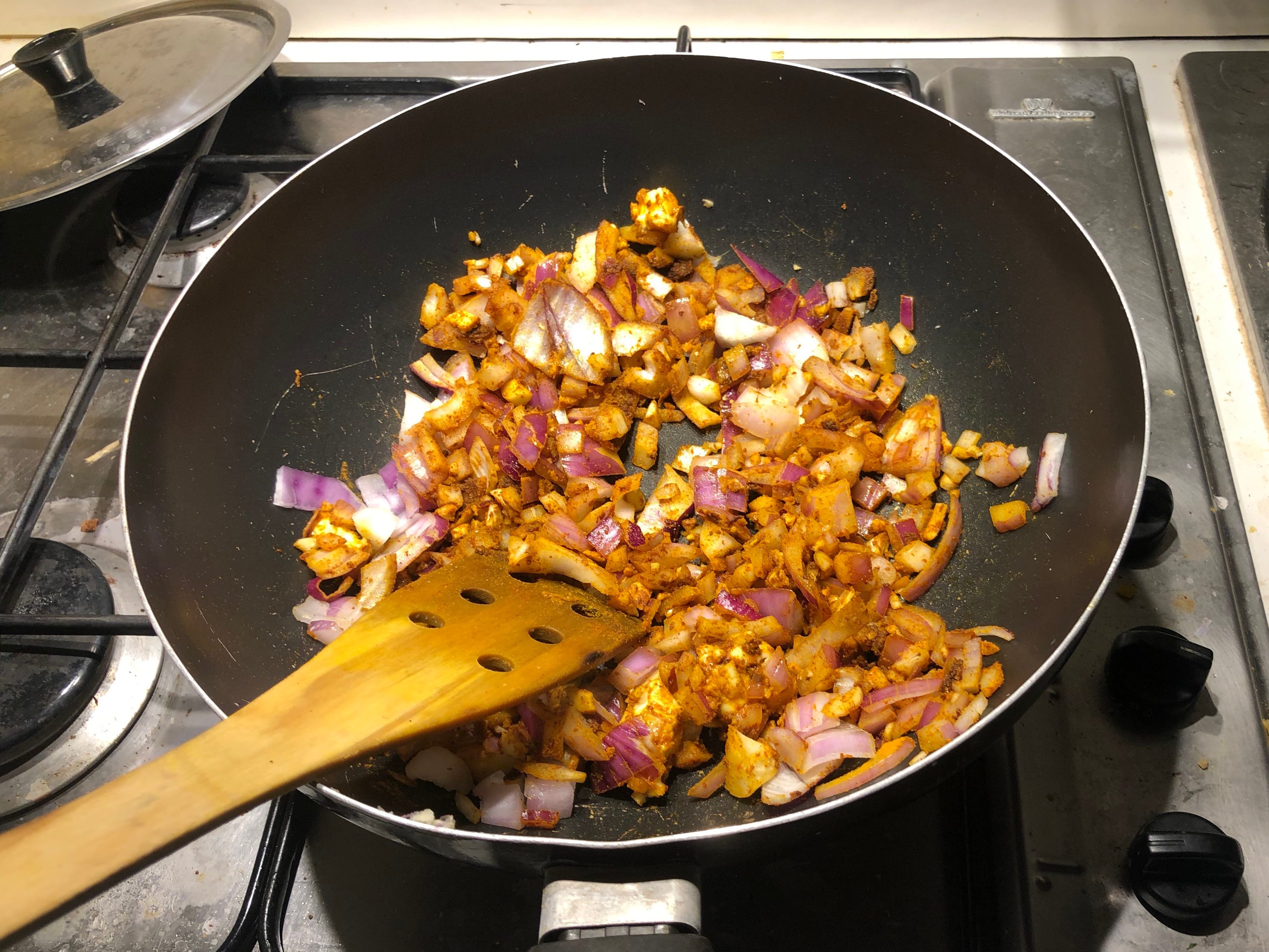 Phoebe Hunt for InsiderI fried the chopped ingredients with the spices and oil.

I diced an onion, a couple of cloves of garlic, and plenty of fresh ginger and added those ingredients to the pan. Then I mixed in some fresh chilli pepper, making sure to include all the seeds.

Lawson blitzed the whole thing into a smooth paste, but I don’t have a blender, so instead, I finely chopped the onions and cilantro stems. This worked well â€” in fact, the added texture was a bonus. I fried these ingredients with a decent glug of oil, and the combination filled the house with a delicious fragrance. Then I added a couple of teaspoons of tomato purÃ©e and stirred it all in.

I mixed in the coconut milk to create a creamy base 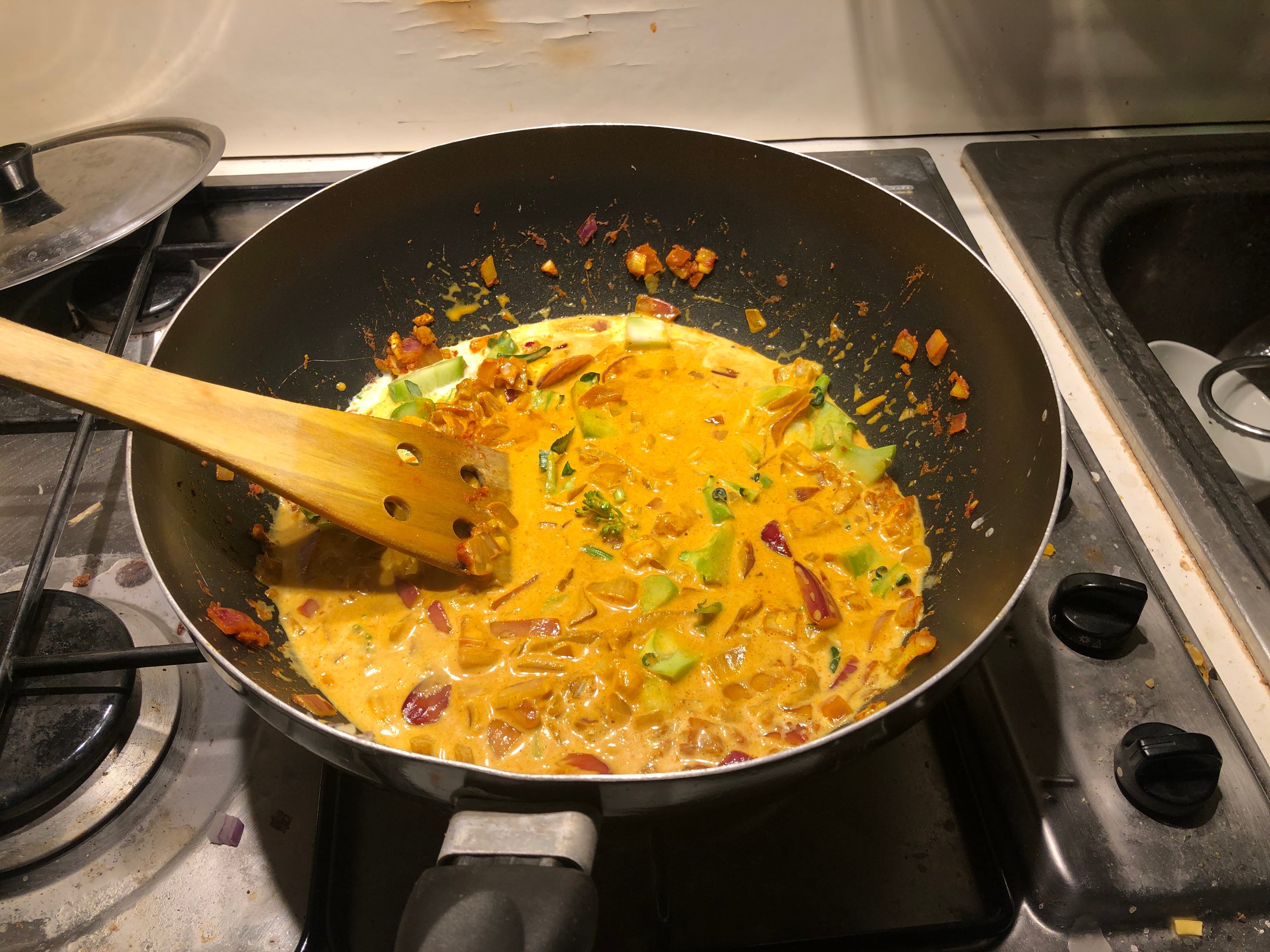 Phoebe Hunt for InsiderIt’s best to use full-fat coconut milk instead of the light alternative.

At this point on the show, Lawson said to add some coconut milk, encouraging chefs at home to avoid the light-fat kind.

After tasting the base, I followed her instructions and added a generous pinch of salt and sugar to the dish, which Lawson said would bring the flavours out.

So far, my curry was looking fairly similar to the one on-screen, if a bit more chunky.

The next step was preparing the vegetables while my base cooked 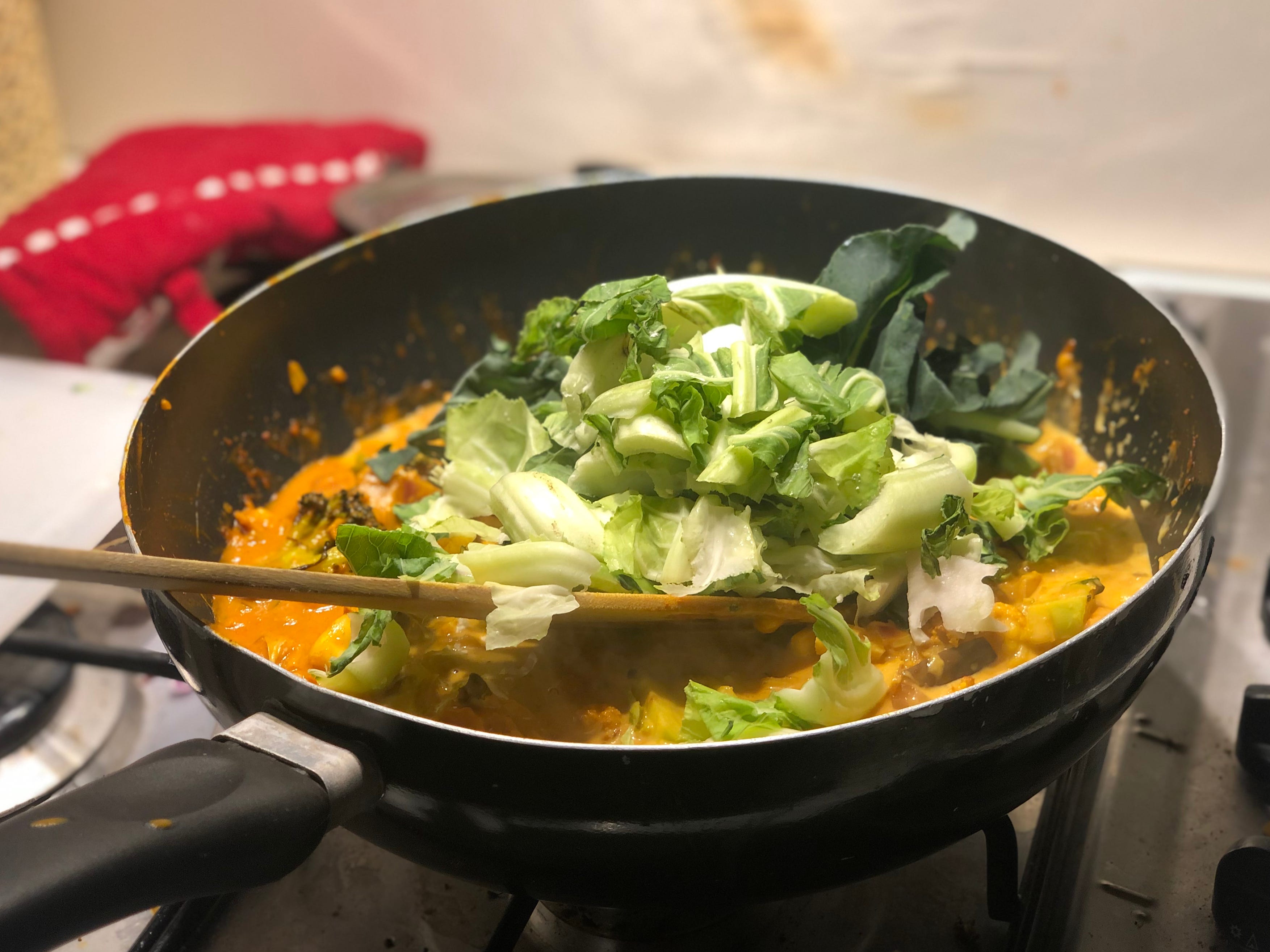 Phoebe Hunt for InsiderYou can add your cauliflower stock to minimise food waste.

I reduced the heat to a simmer and prepared the cauliflower and broccoli â€” I roasted them in the oven with some spices and olive oil, as I prefer the flavour that way.

If you have leftover boiled vegetables in the fridge, this would be an ideal time to use them up. Sweet potato, butternut squash, or red pepper would all work well in this dish.

And for the moment of truth, I added the banana peels 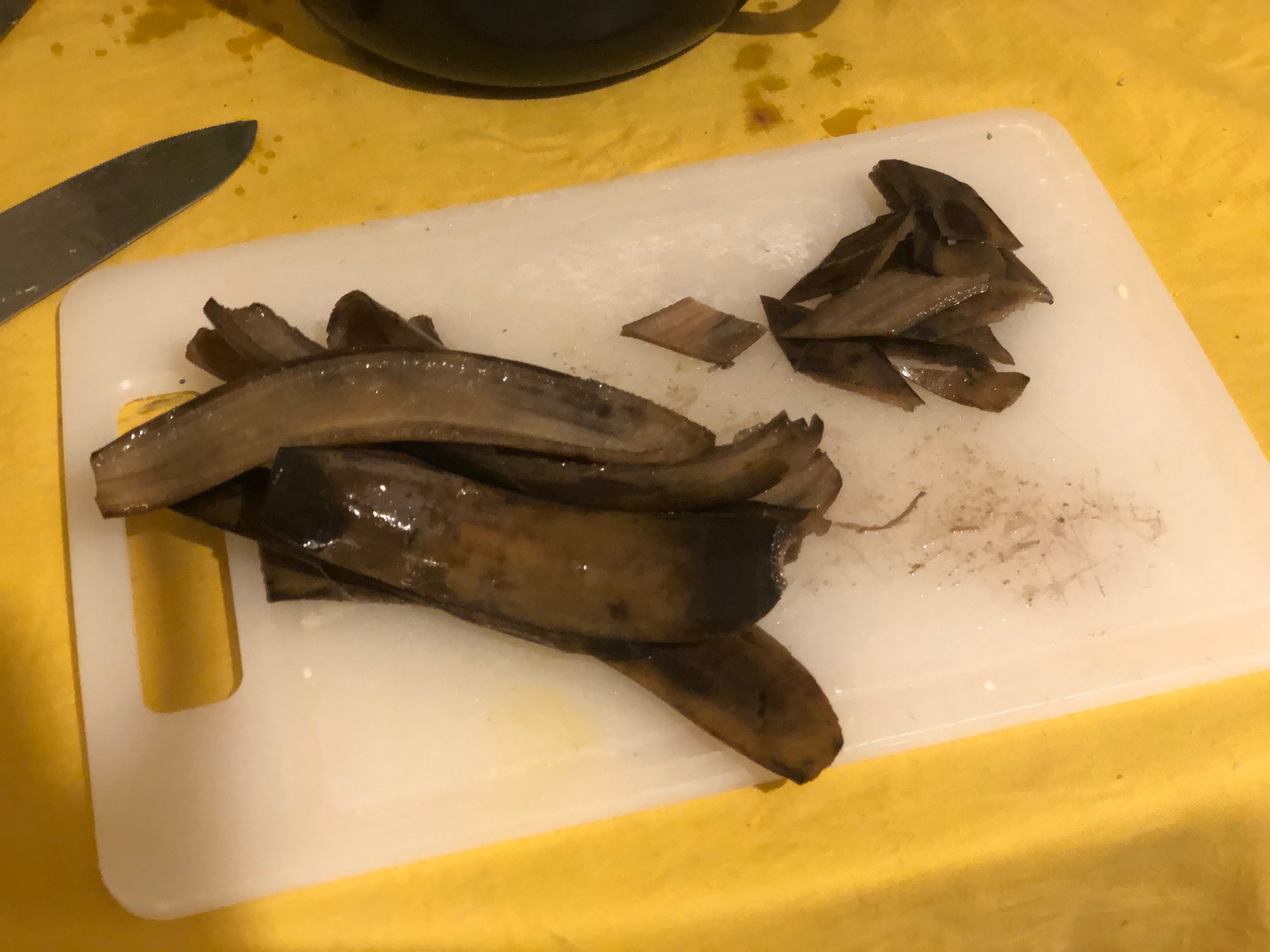 Phoebe Hunt for InsiderI chose to cut the banana peels into small diamonds.

Then it was time to come back to the banana skins, which I must admit, looked pretty unappetizing now that the water was lukewarm.

After fishing them out and slicing them into diamonds, I tried to take some of the stringy bits off, but the peels had softened a lot in the water, so it probably wasn’t necessary. I ate a small piece of one out of curiosity â€” it was bland and unpleasant, but not inedible.

Hoping they wouldn’t ruin it, I doubtfully chucked the peels into the so-far delicious curry sauce. 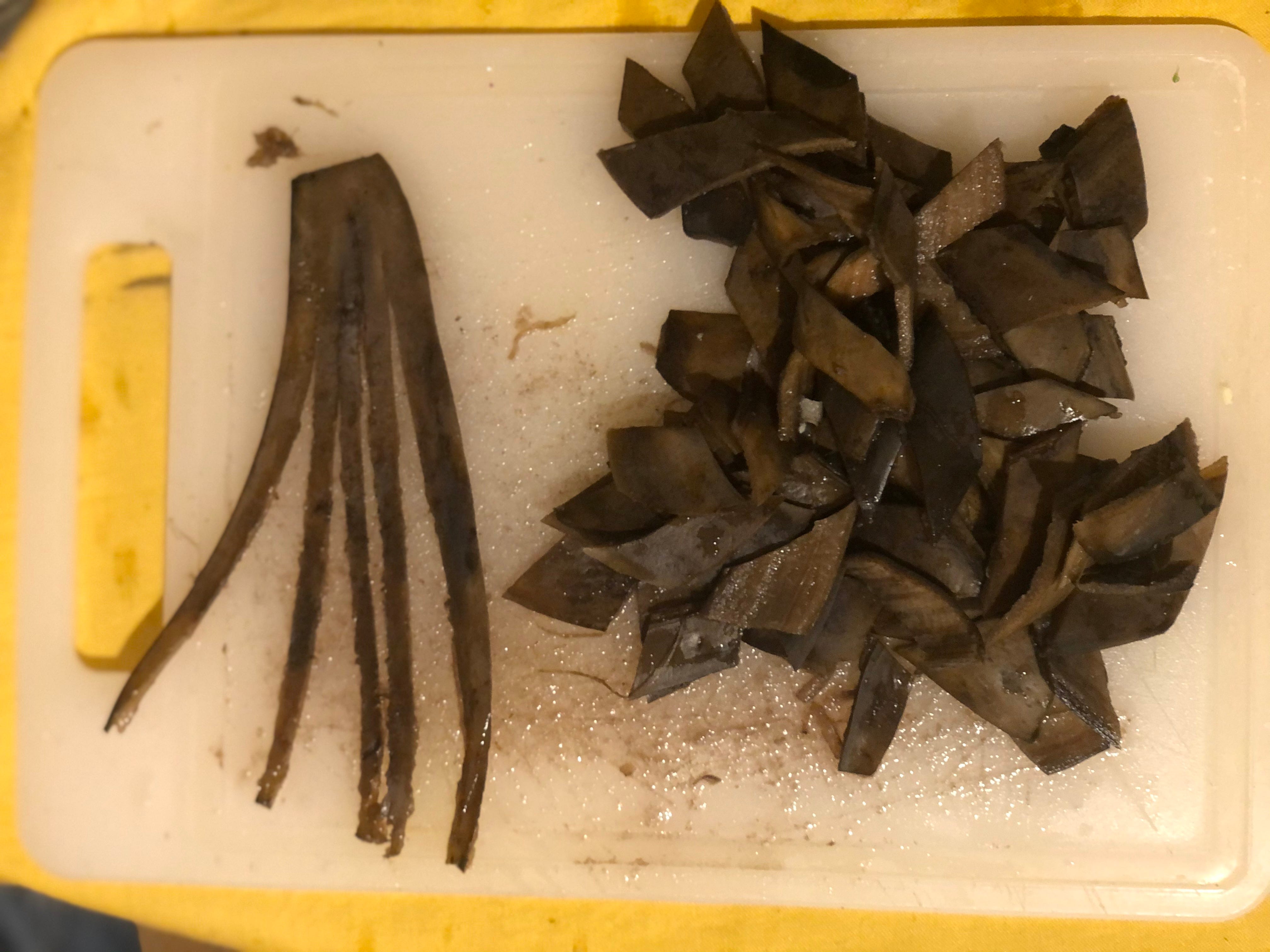 On her show, Lawson also demonstrated how to slice the peels into long, stringy tentacles by scraping a fork down them lengthways, but this looked rather repulsive, and I gave up after one peel.

The peels thankfully changed texture as they cooked 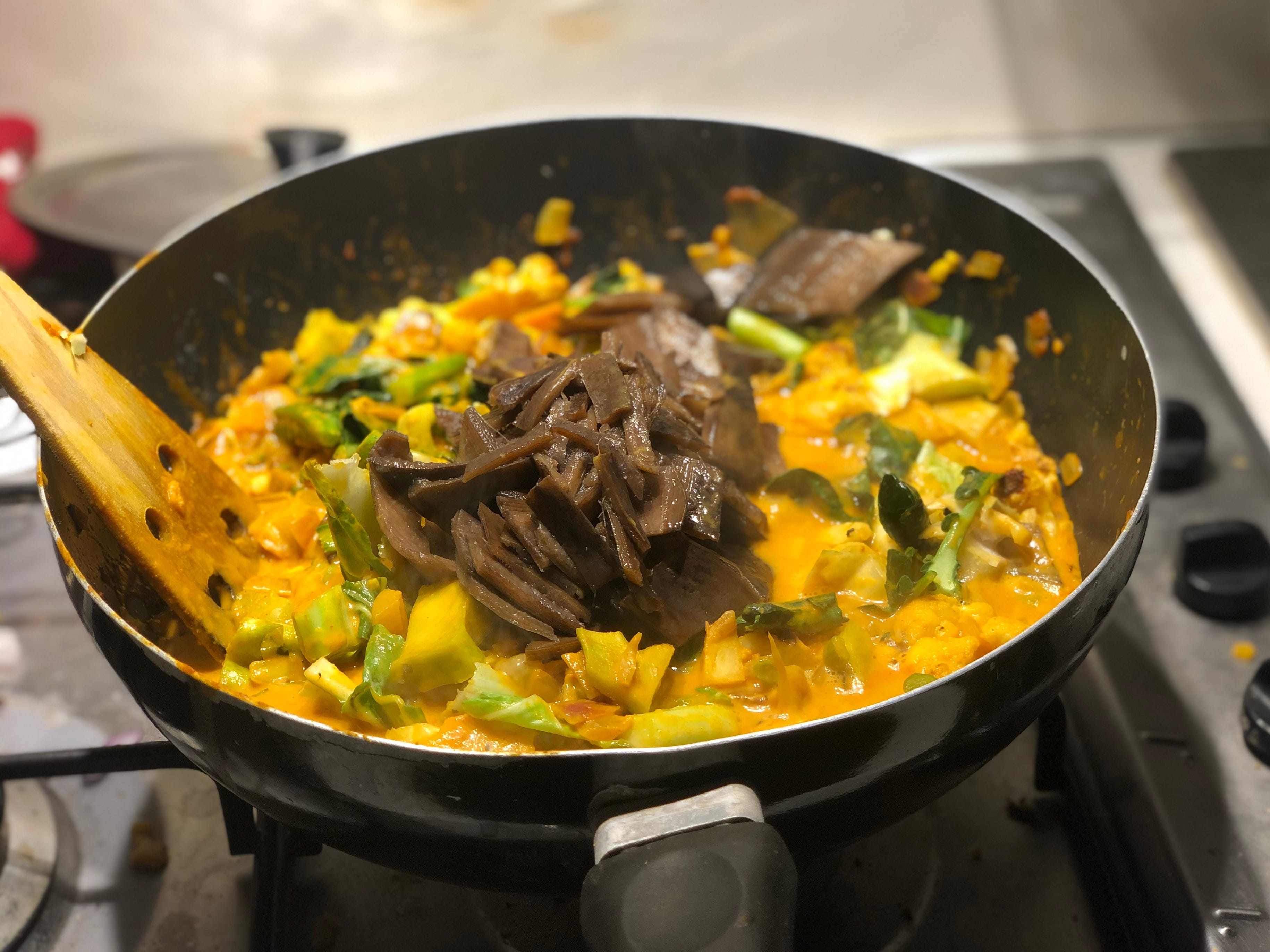 Phoebe Hunt for InsiderI cooked the banana skins with the rest of the curry.

I cooked the chopped banana peels in the simmering curry for about 25 minutes, until they lost their original texture and started to feel like eggplant skin.

Once the peels were almost cooked, I added the rest of the ingredients

When the peels were nearly done, I added the roasted vegetables and let them simmer for a couple of minutes. At this stage, you can sprinkle on the fresh cilantro leaves. You can also add some finely chopped cilantro stalks to the dish, which is another way to reduce food waste.

I served the curry with some hastily homemade naan, which paired great with the dish. 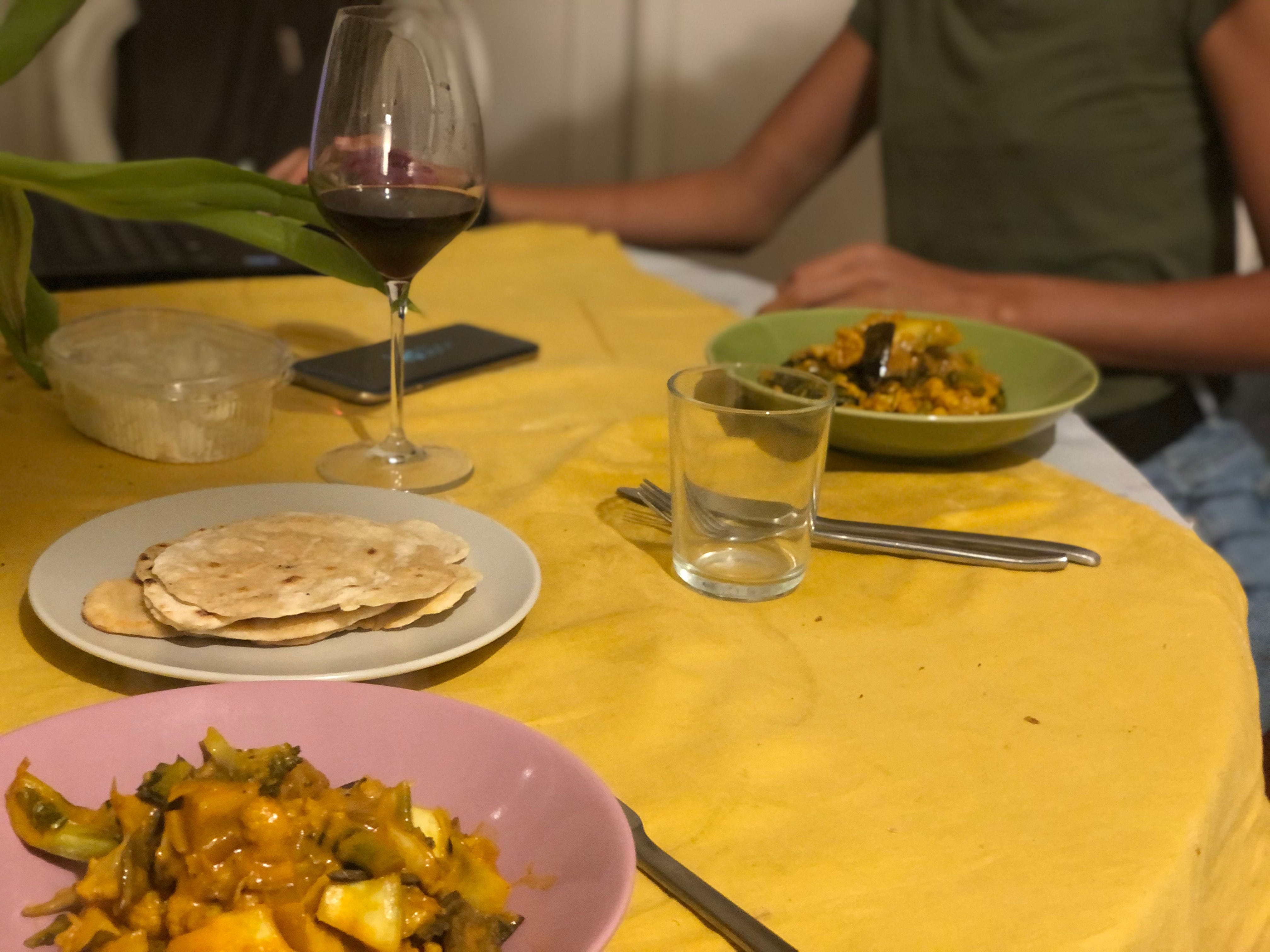 Phoebe Hunt for InsiderI served the curry to some of my friends.

Interestingly, the banana peels weren’t the main event and were almost hard to notice among the cauliflower and broccoli. Even when cooking for people who are picky with vegetables, it would be easy to sneak the peels into a curry or stew instead of eggplant skins.

It’s definitely important to make sure the banana skin is thoroughly cooked and swollen to get rid of that astringent taste it has when raw.

Overall, this curry was a hit, and I’ll definitely be subbing banana peel into recipes where I can in the future.