I ordered a Caniac Combo, which comes with six chicken tenders, fries, two Cane’s sauces, Texas Toast, coleslaw, and a large drink. I decided to swap out the coleslaw for a side of honey mustard. The chain is limited when it comes to sauces, but you can ask for honey mustard on the side if you wish.

The chicken tenders looked super crispy.
The box of food was stuffed to the brim with the crispy chicken tenders, fries, and various sauces.
I tried the chicken tenders with the honey mustard first.
The sauce was creamy and clung to the chicken tenders perfectly. It was tangy and I could really taste the mustard flavor.
The chicken tenders were super crispy and juicy on the inside.
The chicken tenders were thick — I could actually see the strips of white chicken underneath, which, in my experience, you don’t always find with fast-food chicken tenders.
Next, I tried the tenders with the Cane’s sauce.
The chain is famous for its sauce, and after biting in, I could definitely see why. It had a slight kick to it, was super creamy, and surprisingly tangy. It paired perfectly with the chicken and was unlike any other sauce I’ve ever tried.
The Cane’s sauce also paired well with the fries.
For me, the crinkle-cut fries were just OK, but I didn’t mind them. They were soft and fluffy, and there was a generous serving.
I also enjoyed the Texas toast, though the meal was already carb-heavy.
I didn’t feel like it was totally necessary, but I did enjoy it. As a new visitor to Raising Cane’s, I wasn’t sure whether I was supposed to eat it with the chicken fingers like an open-faced sandwich, dip it in the sauce, or just eat it on its own.

Regardless, I thought it was perfectly fluffy and had a nice crisp on the outside of the bread.

The lemonade wasn’t overly pulpy and had a subtle sweetness.
It was perfectly sweet and sour.
I tried ordering the same meal at Chick-fil-A to see how the chains compared.
Chick-fil-A doesn’t sell a six-piece chicken tenders meal so I ordered a four-piece tenders meal instead. I could have ordered two three-piece chicken tenders, but that would have made for a pricier meal.

I ordered the chicken tenders meal with a large lemonade and a medium fry at my local Chick-fil-A in New York City. I also was able to add two Chick-fil-A sauces and two honey-mustard sauces to my order. It came to $14.14 including tax, making it just slightly less expensive than the Raising Cane’s meal. However, I did get less food.

The Chick-fil-A tenders were heavily fried and darker in color than the Raising Cane’s tenders.
A four-piece chicken tender box costs $7.65 when not included in a meal deal.
I dipped the chicken tenders in the honey-mustard sauce first.
The sauce was less creamy than the Raising Cane’s honey mustard. It definitely had a stickier, more honey-like texture.
It coated the chicken tender perfectly.
However, it was definitely sweeter and more honey-forward than the Raising Cane’s honey mustard, in my opinion. I didn’t get the punch of the mustard, as I did with the other sauce.
I thought that parts of the chicken tenders contained less chicken than the ones from Raising Cane’s.
Whereas the Raising Cane’s tenders were thick and super juicy, the one’s from Chick-fil-A had more of a crunch and were flatter in shape. It’s all up to personal preference, but I preferred the tenders from Raising Cane’s.
I also tried the tenders with the chain’s signature Chick-fil-A sauce.
Chick-fil-A sauce is undeniably delicious, in my opinion — I have a bottle of it in my fridge at all times. While I loved the sauce and thought it paired well with the crispy tenders, I still thought the tenders could have been a little juicier.
I also tried Chick-fil-A’s waffle fries.
They were perfectly salted.
The fries were fluffy and paired well with both sauces.
I’m a big fan of the waffle fry shape — I find it helps to scoop up the sauce.
It may just be me, but I wasn’t a huge fan of the lemonade from Chick-fil-A.
I know many people love the signature lemonade from Chick-fil-A, but it was a little too pulpy for my taste. I also thought it could have been a touch sweeter.
In the end, I had to give the win to Raising Cane’s.
While I preferred the waffle fries at Chick-fil-A to Raising Cane’s crinkle-cut fries, everything else about the order from the smaller chain blew me away. I loved the crispy yet juicy chicken tenders, both sauces, the lemonade, and the addition of the Texas toast. I also got two more chicken tenders for basically the same price as the Chick-fil-A meal.

I’ll continue to visit Chick-fil-A up north in my native New York. However, the next time I’m in a state with a Raising Cane’s, I’ll definitely be swinging by. 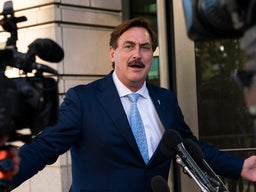