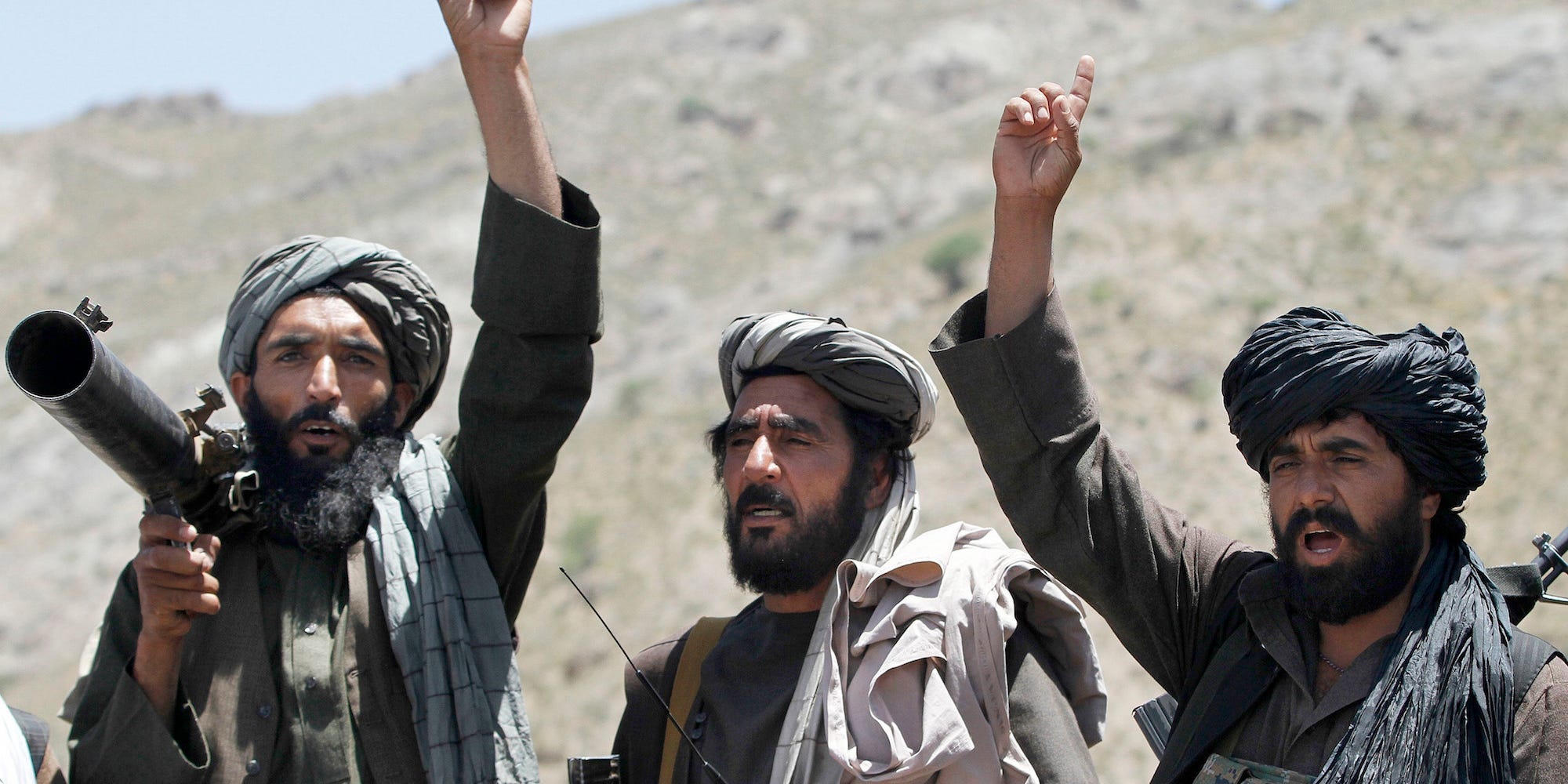 Associated Press/Allauddin KhanIn this May 27, 2016 file photo, Taliban fighters react to a speech by their senior leader in the Shindand district of Herat province, Afghanistan.

The Taliban said Wednesday that it welcomed President Donald Trump’s decision to withdraw thousands of US troops from Afghanistan, calling it a “good step.”

“It is a good step and in the interest of the people of both countries,” Taliban spokesman Zabihullah Mujahid told AFP Wednesday. “The sooner the foreign forces leave, the more the war will be prevented.”

His remarks follow aan announcement by the newly installed acting secretary of defence, Chris Miller, that the US is withdrawing roughly 2,000 troops from Afghanistan in the coming months.

“I am formally announcing that we will implement President Trump’s orders to continue our repositioning of forces” from Iraq and Afghanistan, he said at the Pentagon Tuesday, adding that by January 15, there would be 2,500 US troops in Afghanistan and 2,500 in Iraq.

Miller became the defence secretary after Trump fired Mark Esper, who warned the White House just prior to his termination that the conditions on the ground in Afghanistan did not support the president’s plan to withdraw thousands of US troops.

Since Miller arrived at the Pentagon last Monday, he has sent two memos to the Department of Defence calling for the need to end the war and bring troops home. He wrote in one that “all wars must end” and that “it’s time to come home.”

Trump has campaigned on concluding the so-called “endless wars” in the Middle East, such as the war in Afghanistan that the US has been fighting for nearly two decades, and since February, his administration has been steadily pulling thousands of troops out of the country.

To accelerate an uncertain peace process, the Trump administration has also pushed for Afghan government concessions, such as the release of 5,000 Taliban prisoners, even as the Taliban has failed to live up to expectations of reducing attacks by its militants.

In the run-up to the US presidential election, the Taliban actually endorsed the president, with a spokesman saying: “We hope he will win the election and wind up US military presence in Afghanistan.” The Trump campaign rejected their support.

While the Taliban has welcomed the withdrawal of a substantial number of US forces, the Afghan military has not, according to multiple reports.

“If the US draws down to 2,500 so soon, it will create a lot of problems throughout our military,” Col. Abdul Fattah Ishaqzai, the maintenance chief for the Afghan air force, told Stars and Stripes. “I think our American colleagues should look at the situation in the country and be very careful about withdrawing.”

Col. Zabiullah Ghorzang, Afghan army regimental commander in Kandahar Province, lamented the potential loss of American air support, telling The New York Times that “if it were not for the air support of US forces, the Taliban would be sitting inside Kandahar city now.”

Javid Faisal, a spokesman for Afghanistan’s National Security Council, wrote on Twitter Monday that “to release thousands of terrorists, get nothing in return, and then withdraw, is a failed strategy for war and peace,” adding that such “policy blunders” embolden terrorists.

A number of US lawmakers, including some senior Republicans, have raised concerns about the withdrawal plans as well.

On Monday, Senate Majority Leader Mitch McConnell told reporters that “a rapid withdrawal of US forces from Afghanistan now would hurt our allies and delight the people who wish us harm,” adding that such a move would be as “humiliating” as the US withdrawal from Vietnam.