More than four months after identifying its first coronavirus case, Taiwan has reported less than 450 infections. Only seven people of the country’s 24 million have died.

Part of that success in fighting the virus was Taiwan’s quick response: The state began to monitor incoming travellers from Wuhan for signs of respiratory illness on December 30, after Chinese ophthalmologist Li Wenliang warned fellow doctors about a possible outbreak resembling SARS. Then in January, Taiwanese officials began isolating every infected patient and tracing their contacts.

But a second key element of Taiwan’s strategy was communicating with citizens through humorous stunts and digital campaigns. The state hired comedians to help craft viral memes, adopted animal mascots to inform the public about important safety information, and even used teddy bears to encourage social distancing at restaurants.

Audrey Tang, Taiwan’s digital minister, said at the TED 2020 conference that her mantra is “humour over rumour.” So Tang developed a strategy for delivering information about the virus in a fast, fair, and fun manner.

“The pandemic in Taiwan actually strengthened our democracy,” she added.

Here are some of the whimsical strategies that helped Taiwan avoid a widespread outbreak without a lockdown.

Taiwan’s digital ministry consulted with comedians to develop viral campaigns like this one featuring the state’s premier, Su Tseng-chang. 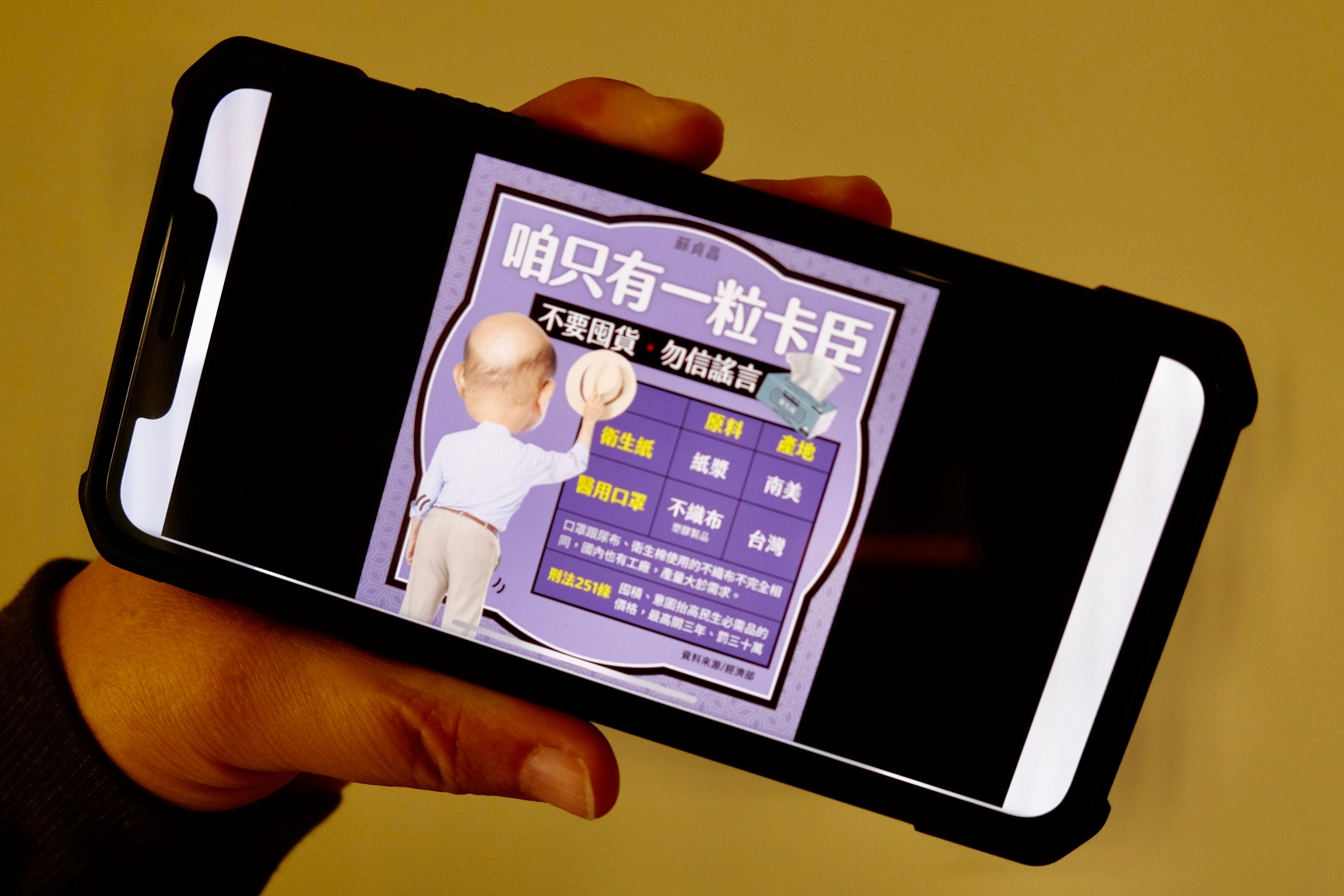 “Comedians are our most cherished colleagues,” Tang said.

The cartoon featuring Premier Su Tseng-chang, she explained, reads: “We only have one butt, don’t hoard, don’t trust rumours.” (The words “hoard” and “butt” sound the same in Mandarin.) It was developed in response to a rumour (started by a toilet-paper company) that toilet paper was running low in Taiwan.

“Because of that, the panic-buying died down,” Tang said. “Because people think it’s hilarious, they share it, but with no malice or toxic intentions.”

In the Facebook post above, Zongchai encourages citizens to communicate virtually with friends and friends. In a Valentine’s Day post, Zongchai reminded people to wash their hands, stay sober, and practice safe sex.

“What if I am single?” the campaign read. Zongchai joked: “Stay home then!”

Other animal mascots, like this pigeon in a face mask, inform residents about travel restrictions. 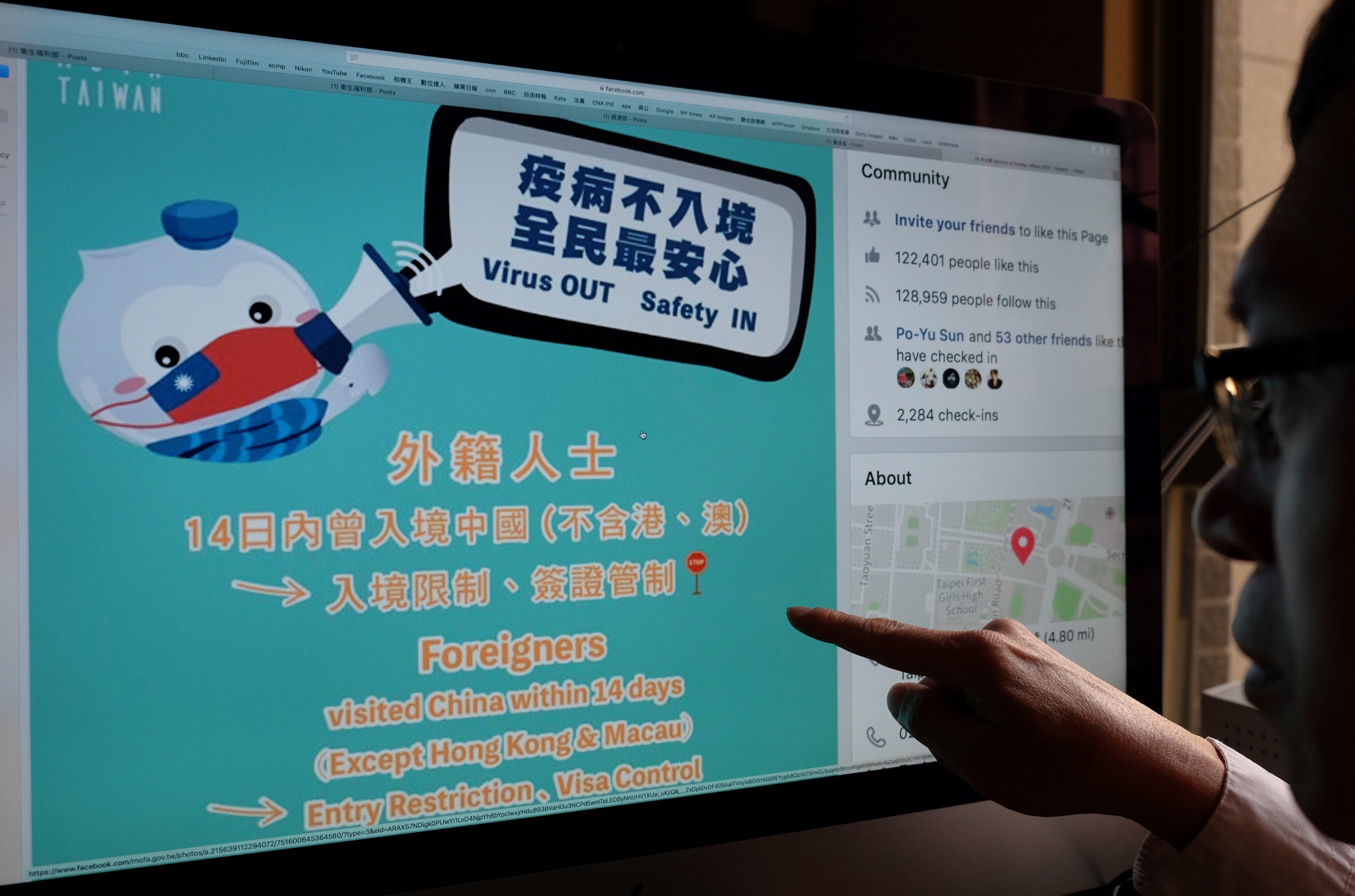 The above cartoon, posted on Taiwan’s Ministry of Foreign Affairs Facebook page, announced a travel ban in February for foreigners who had travelled to China within the prior two weeks.

Tang said digital campaigns are accessible to the entire state: “In Taiwan, we have broadband as a human right.”

Some Taiwanese restaurants have placed teddy bears on chairs to make sure people sit at least 6 feet apart. Arne Dedert/Picture Alliance/Getty ImagesTeddy bears sit at tables at the restaurant ‘Beef’n Beer’ in Hofheim, Germany, on May 25, 2020.

The trend isn’t exclusive to Taiwan – restaurants in Germany and the US have adopted the strategy as well. But, unlike those nations, Taiwan never closed its bars, restaurants, or retail stores.

Instead of closing schools, Taiwan separated students with plastic partitions. Sam Yeh/AFP/Getty ImagesStudents eat their lunch on desks with plastic partitions as a preventive measure to curb the spread of the COVID-19 coronavirus at Dajia Elementary School in Taipei on April 29, 2020.

Some scientists have pointed to Taiwan’s low case count as evidence that school closures might be unnecessary to reduce transmission. 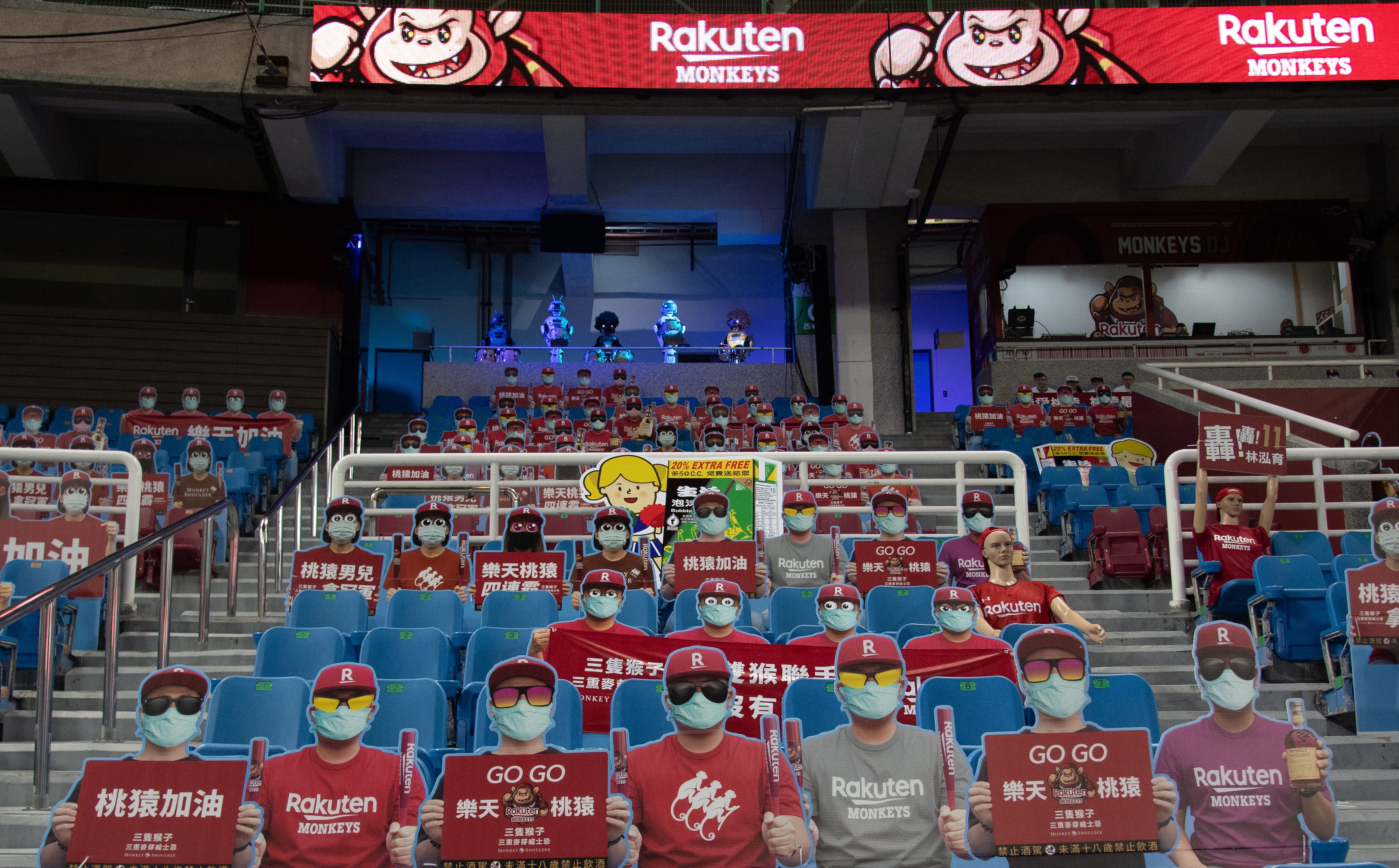 Gene Wang/Getty ImagesCardboard cutouts at a closed-door game between the Rakuten Monkeys and Fubon Guardians at the Taoyuan International Baseball Stadium on May 7, 2020 in Taoyuan, Taiwan.

The games were closed to the public in April, though fans were allowed to return to stadiums in early May as long as they maintained social distance and wore face masks.

A colourful map lets people know where to find face masks at nearby pharmacies. 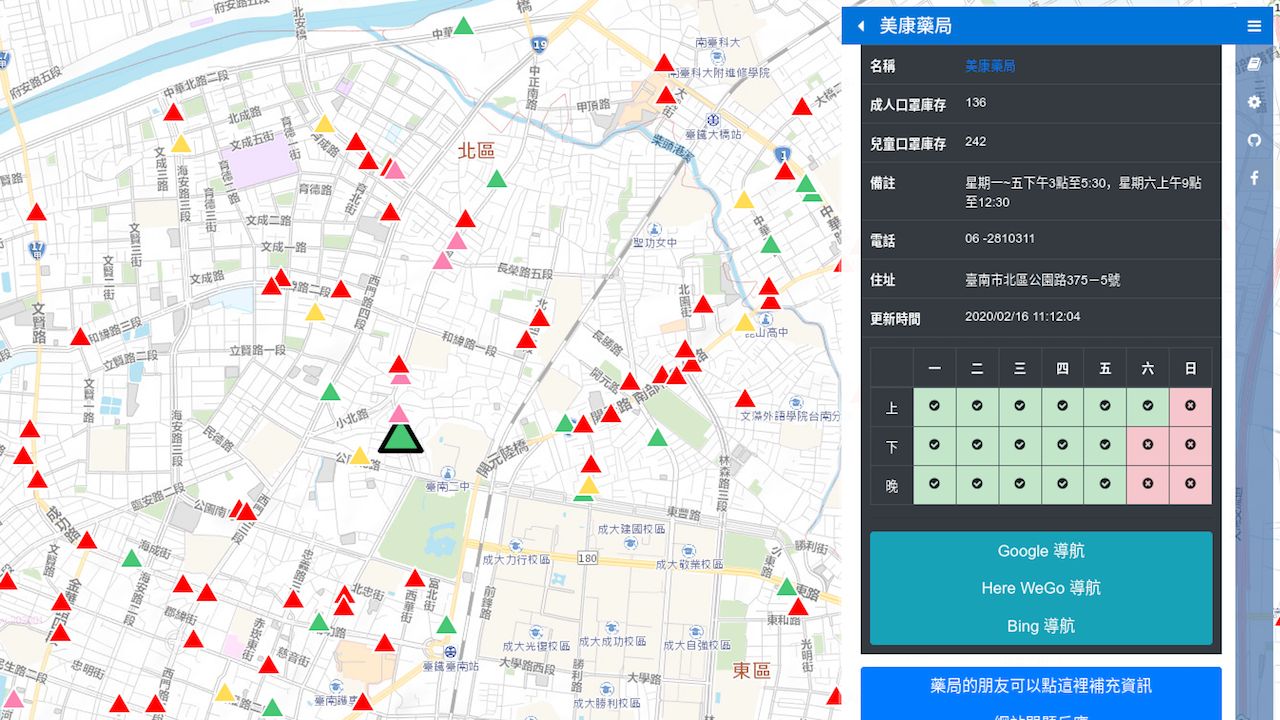 Taiwanese residents can get free masks through their health insurance, though they can’t choose the colour.

Taiwan originally limited the masks to three per week for each insurance cardholder, then starting April 9, cardholders have been able to get nine masks every two weeks.

After some male students were reportedly bullied for wearing pink masks to school, Taiwan’s male health officials wore pink masks to a press conference on April 13.

“It’s fine for a man to wear pink,” Chen Shih-chung, the state’s minister of health and welfare, said at the conference. “Pink is for everyone.”

Taiwanese residents can also ask their Google assistant scientific questions. If the chatbot doesn’t know the answer, Tang said, it will consult a scientific board. 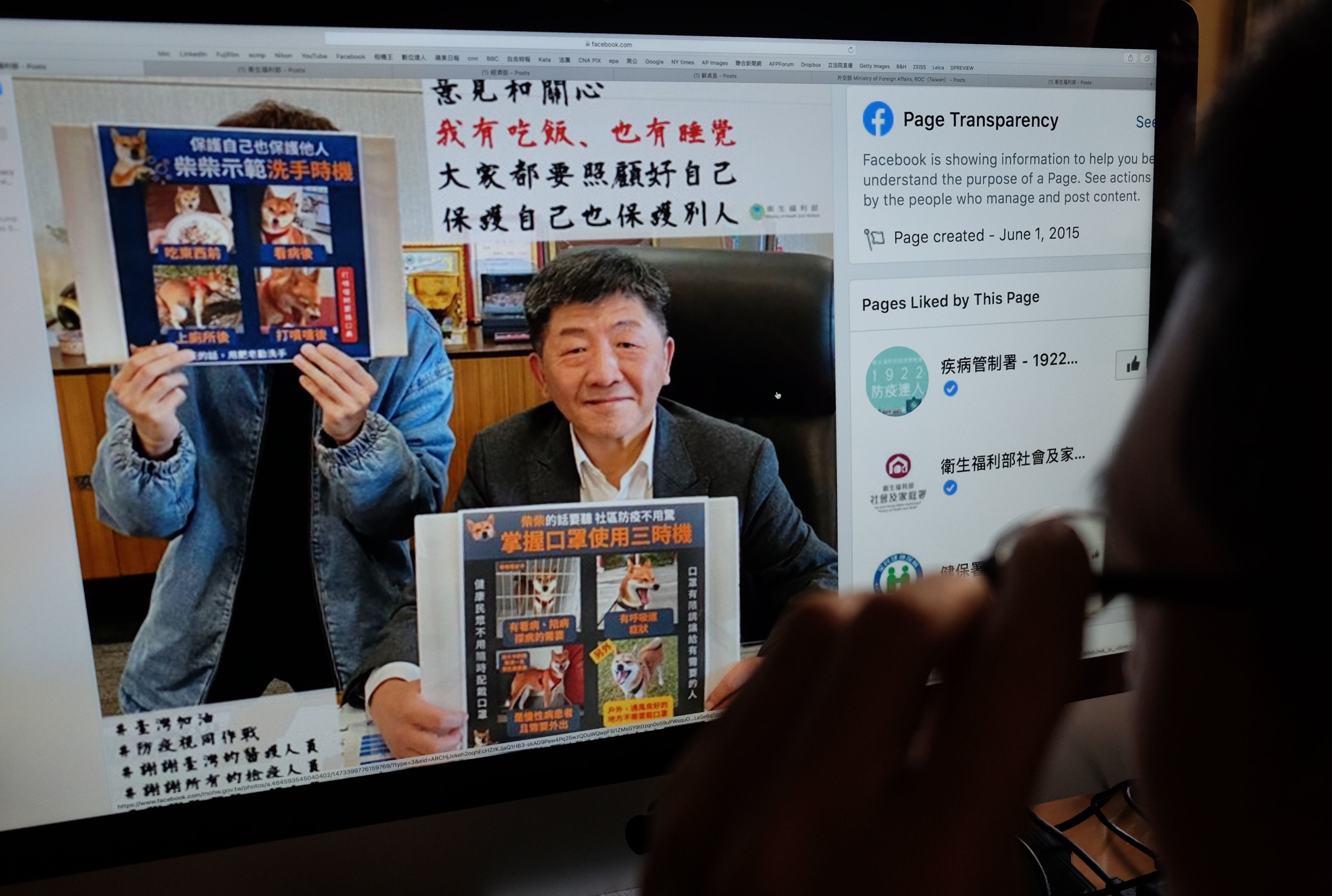 Taiwan’s Centres for Disease Control unveiled the technology on May 22. Citizens can start the conversation with a simple line: “I want to talk to Taiwan CDC.”

Tang said this kind of rapid response system has built trust between the government and civil society.