Smartphones aren’t going anywhere anytime soon. It will be another decade (or more) before your digital life is projected into the world around you, viewed through seemingly magical augmented-reality glasses.

You know the kind: The Google Glasses of the world, worn like sunglasses, which appear to “project” stuff like email or directions directly into reality when they’re actually just overlaying your vision with digital information. Screenshot‘Back to the Future 2’ features augmented-reality glasses from JVC, which is hilariously anachronistic and adorable.

For many folks in Silicon Valley, augmented reality is an inevitable evolution of the current smartphone-obsessed world we live in. That begs the question: What will that world look like? A new Xbox One and PC game called “Tacoma” offers a vision into that worryingly-believable future.

In 'Tacoma,' set in 2088, you're an employee sent to explore an abandoned space station (named 'Tacoma'). You can watch employee AR logs to unravel the game's story. In reality, that means you can watch their their lives play out through ghostly silhouettes and voice recordings. In the future where 'Tacoma' is set, employees of the Venturis corporation are working on a space station. A condition of their employment is having their entire lives recorded through augmented reality. As a result, your exploration of the now-abandoned space station is filled with ghostly replays of their lives.

In a nod to another potential AR feature of the not-so-distant future, each employee's job is designated by the symbol on their back. Above, the station medic plays a game of pool. The skeletal frames recorded by the space station's monitoring system enable the player to see a surprising amount of human interaction.

In this instance, you can see a surprising amount of detail even with just superficial skeletal tracking. One man makes an argument to a group of people while they react in a variety of different ways. Also of note: ID tags pop up over people, like in a virtual world. There are a variety of less-than-savoury connotations to this concept -- perhaps those ID tags also show annual income, or other status measurements -- but in the world of 'Tacoma,' it's solely used as a personnel badge.

Imagine this concept playing out in real life, though:

You go to meet your friend at Central Park, but it's huge. Where are they?! You call your friend, and their face pops up a foot away from your own on a projected screen. 'Where are you?' you ask. 'Right here,' your friend says -- and instantly, a real-world indicator shows their location. Your AR glasses guide you to the friend, seamlessly, while walking -- projecting directions into the world around you. No stopping to check your phone or look on Google Maps or whatever else. It's this promise that makes AR so appealing, and the logical successor to smartphones.

That's one of the big promises of augmented reality: the end of screens. In this image, you can see a silhouette of a person using an AR computer -- it simply pops up in front of them, wherever they are. No screen! This concept of AR has been most touted by companies like Magic Leap -- a means of doing basic computer tasks like email, web browsing, or video streaming in AR. Rather than looking at a screen, the screen comes to you. In the world in front of you, your AR headset projects the 'screen' where you view whatever you want. You could use your voice, or a physical controller, to manipulate what you see on the digital screen.

'Tacoma' showcases the potential AR future for stuff we usually do on smartphones and computers, which seems highly plausible given examples we've seen from places like Magic Leap.

Take this example still image from a Magic Leap concept video, for example:

Here's another shot of that AR computer in action in 'Tacoma.' The screen is only viewable by whoever is using it, even though it's a large computer screen seemingly floating in the air. It's easy to imagine this type of technology easily slipping into everyday use; it essentially computerizes our consciousness, which has already begun taking place with the advent of home computers and ubiquitous smartphones.

Since 'Tacoma' is played from a first-person perspective, it offers a view of what it might be like to live in a world where augmented reality is normal. The floating upside down pyramid and the various signs in the world are projections, only seen by the person wearing an AR headset of some type. Simple applications like this are just the beginning for AR. In the case of 'Tacoma,' one of your first interactions with the world involves seeing these pretty standard AR concepts. Similarly, in reality, we're likely to see tame stuff like instructional signs and basic computer functions as some of the first applications of mainstream AR.

More than just convenient, AR signs can be easily changed -- think of it like a holographic computer screen, where anything can be projected. To this end, AR turns your real life into a kind of video game reality. Your actions are contextual based on location, as are the things you see pop up in the world around you.

Imagine you're an employee at Future Corp. and your employer is able to grant you access to locations, projects, and staff based on your AR clearance. The concept of AR depicted by 'Tacoma' marries your digital life with your real life in fascinating, complex ways.

Along the same lines, the AR recordings in 'Tacoma' that are used as employee logs could also be applied to, say, burglary analysis, or monitoring pets at home from afar. In the case of 'Tacoma,' most of the AR logs are pretty tame. These two staffers above, for instance, are enjoying a conversation while floating around in low gravity.

But what if your home is broken into while you're out? AR data could provide a lot more info about exactly what happened and how, enabling police to better pinpoint the culprit and insurers to better recompense your lost goods.

On the lighter side, it'd be a really effective way to see what your pets are up to during the day. Turns out they actually were playing poker all day.

Aside from the amazingly logical vision of the future 'Tacoma' envisions, it's a fantastically enjoyable game. If you've got an Xbox One or PC, it's available to play right now and costs just $19.99. Check out the launch trailer for it right here if you're interested! 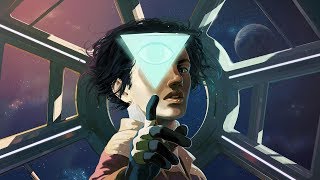