Turkey is crushing Syria's army after wiping out its heavy armour with superior tech, daring Russia to step in and save them

Turkish forces decimated the Syrian army in a series of drone, artillery and bomber attacks this weekend, leaving Syria’s top ally Russia weighing how much it should intervene to stop the offensive.

Turkey turned its total air superiority – via a fleet of cheap drones and high-tech F-16s – into an operation that claimed at least two Syrian jet fighters, eight helicopters, 135 tanks, and 77 other armoured vehicles, with as many as 2,500 Syrian troops killed, according to the Turkish defence ministry.

It’s left the Syrian military unable to protect its frontline armour and artillery units, which have been methodically targeted by cheap but highly accurate missiles.

And with Russia thus far unwilling to directly confront the Turkish military, Bashar al-Assad’s army could continue to suffer, paving the way for Turkey to achieve its goal of pushing regime forces out of Idlib.

Turkey’s defence ministry has been tweeting footage from the attacks:

Turkey poured at least 7,000 regular army forces into the rebel-held Syrian pocket of Idlib, whose collapse after a monthslong offensive from the regime threatened to send almost a million Syrian refugees over a border into Turkey.

Turkish President Recep Tayyip Erdogan last week had warned that the Syrian offensive into Idlib – which is backed by heavy Russian air support – must end to prevent hundreds of thousands of new refugees from joining more than 3 million Syrian refugees already in Turkey.

But when Syrian troops ignored these demands, Ankara approved a military operation that immediately began the systematic destruction of Syrian regime units in the area.

On Sunday the Turkish defence ministry officially announced “Operation Spring Shield,” a campaign to push against the Syrian advance in Idlib, though the attacks had already begun days earlier. 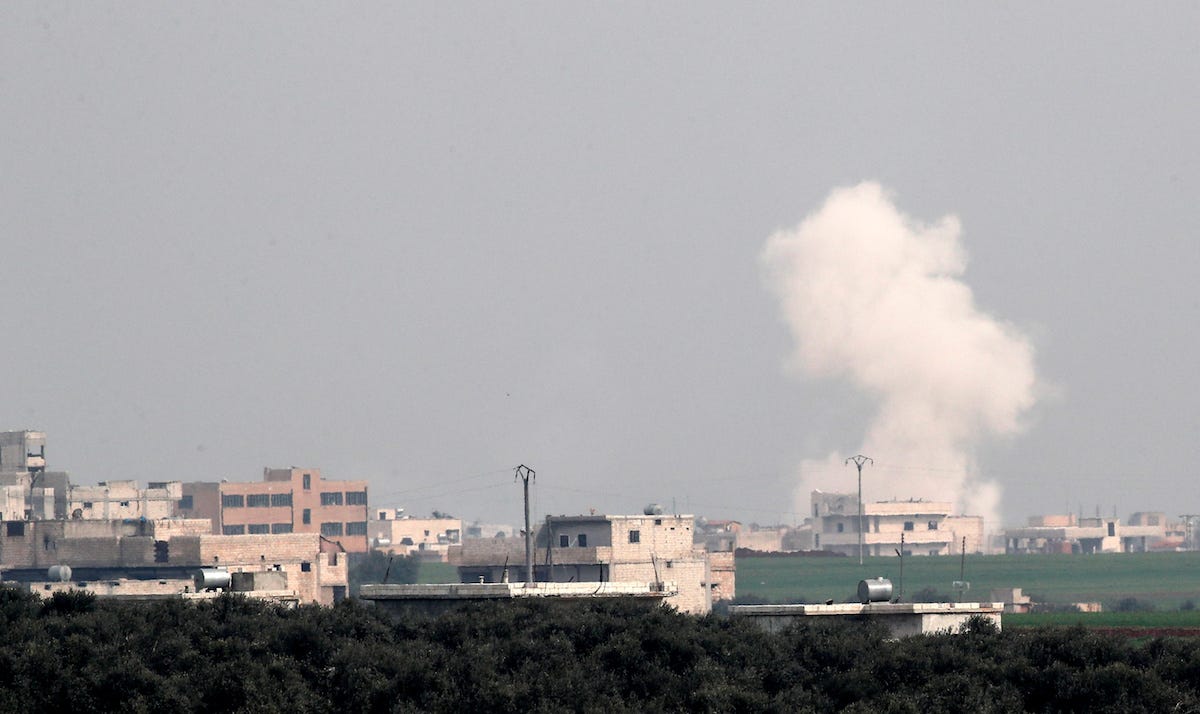 Umit Bektas/ReutersSmoke rises after an air strike in Saraqeb in Idlib province, Syria, on Friday.

On Monday, Russian air units were supporting Syrian military units attempting to recapture the strategic crossroads of Saraqeb from the rebels, but they appeared to only be targeting Syrian rebels backed by Turkey, rather than Turkish forces directly.

Control of Saraqeb could determine much of the final outcome for Idlib as it controls a highway junction that links Damascus, the Syrian capital, to Aleppo, the country’s largest city.

Turkey is believed to only seek security for the Idlib pocket to prevent a further influx of refugees fleeing the regime advance.

So far, it’s unclear how far Moscow is willing to go to help its Syrian allies retake the entirety of the country after a nearly ten-year-old civil war that’s killed half a million people and displaced nearly a third of the country.

Russian President Vladimir Putin and Erdogan have scheduled a meeting in Moscow on Thursday to discuss the situation.