Sweden never locked down and isn't testing widely for the coronavirus. Residents with COVID-19 symptoms say they feel invisible. 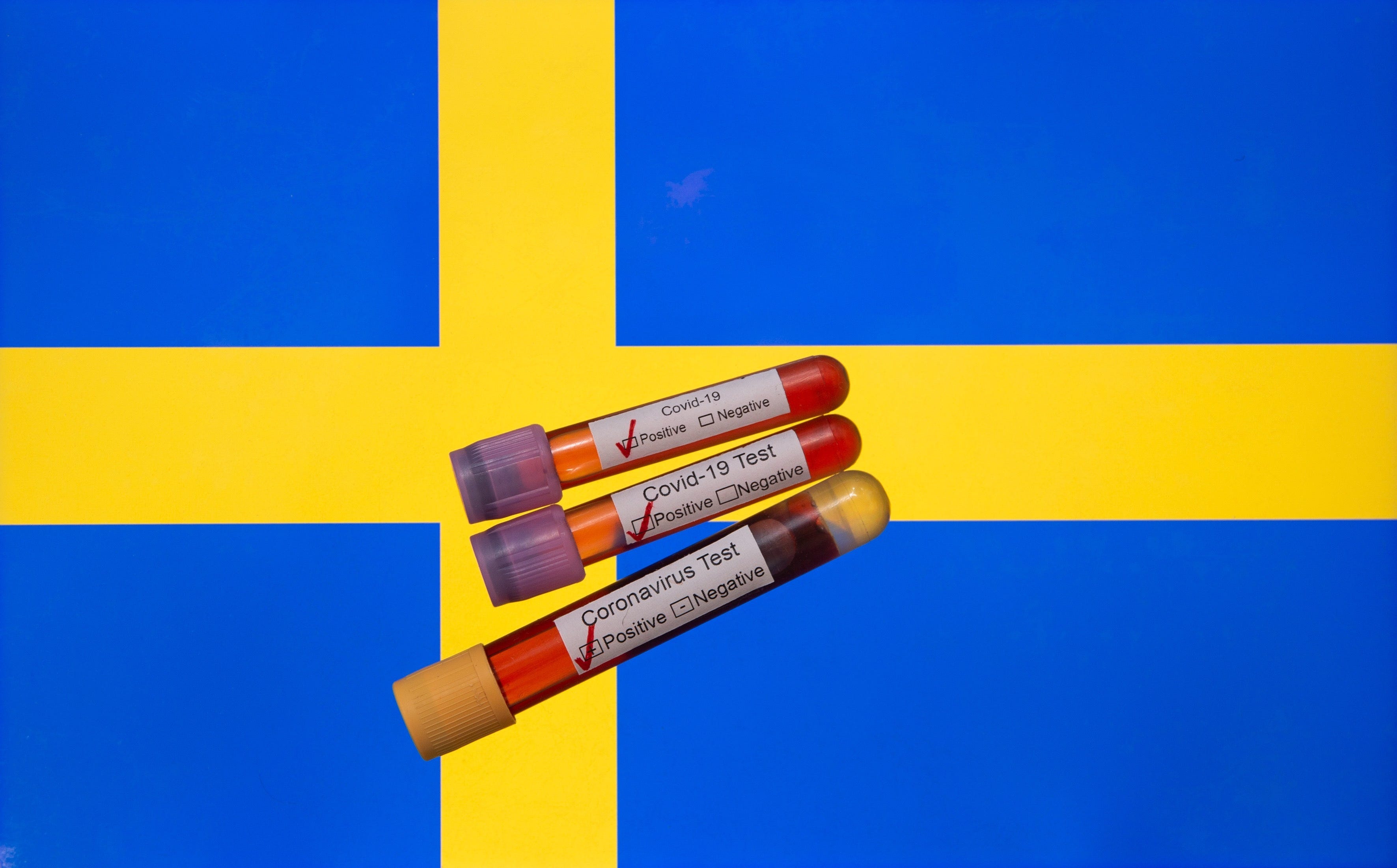 On the first day of her illness in March, Yvonne Karolin was so exhausted, she could barely lift a spoon to her mouth. Within a week, she had shortness of breath, a sore throat, headaches, and a low-grade fever – all symptoms of the coronavirus.

“It is not possible to distinguish COVID-19 from other infections from only the symptoms,” the Swedish Public Health Agency website reads. “A laboratory test is required.”

But Karolin, a 50-year-old development manager who lives in Stockholm, never got a test.

After calling Sweden’s free healthcare hotline, Vårdguiden 1177, she was told to go the hospital. There, she waited two hours in a tent, only to be told by the doctor that the hospital wasn’t administering diagnostic tests for COVID-19.

“She said, ‘No, we don’t test. We don’t test anyone. We don’t even test ourselves.’ And then she left,” Karolin said of the doctor’s response.

Unlike other countries in Europe, Sweden opted not to impose a nationwide lockdown. Instead, it asked citizens to exercise social responsibility by maintaining a safe distance from one another and isolating if they felt sick. But the nation lags behind most of the world in terms of coronavirus testing rates, making it hard to determine the full scale of its outbreak.

Public-health experts agree that widespread testing is critical to know whether an outbreak is contained.

“I think there has been no testing at all here in Sweden, more or less,” Karolin said. “That is the biggest mistake ever in this country that they haven’t tested anyone.”

Those without life-threatening symptoms struggle to obtain tests

But even Katharina, a 45-year-old doctor living near Gothenburg, said she couldn’t get tested.

Katharina, who requested to go by her first name due to the nature of her work, told Business Insider she visited the emergency room three times with headaches, a sore throat, cough, and shortness of breath. Her husband, however, got tested two weeks after developing mild symptoms because he works with pediatric cancer patients, she said. The results came back negative.

“I have the impression it’s really impossible to get one,” Katharina said. “I don’t know who gets it, actually, because you have to be really, really sick.” 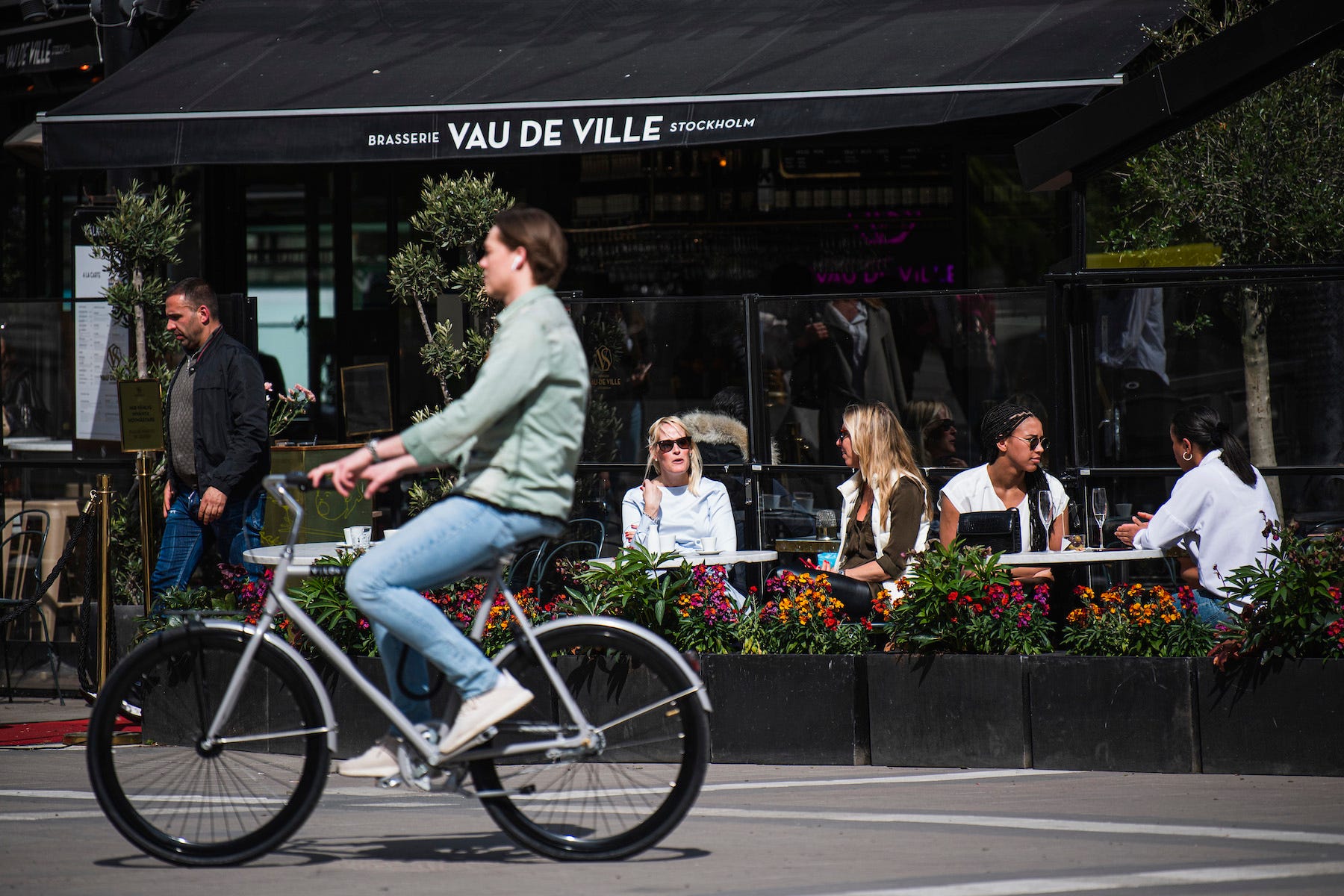 JONATHAN NACKSTRAND/AFP via Getty Images)People sit in a restaurant in Stockholm on May 8, 2020.

On May 19, Sweden announced that it would expand testing to include those with mild symptoms. As of May 8, about 1,000 people were being tested in Stockholm per day, according to TheLocal.se, an English-language news service for Sweden. By comparison, New York City was conducting around 20,000 daily tests as of May 17.

Christina Dahlgren, an architect in Malmo who has been sick for eight weeks, said she has called her general practitioner every week to ask about a test. Before Monday, she hadn’t gotten past the receptionist, she told Business Insider.

At the start of her illness, Dahlgren said, she developed a headache, body aches, chills, sore throat, and diarrhoea. These days, she primarily feels fatigued and has experienced nerve pain in her hands and feet. When she finally spoke to a doctor this week, however, Dahlgren was told that a diagnostic test had to be performed within a few days after her symptoms arrived.

Daryl Tunster, a 37-year-old living in Sweden’s southernmost county, Skåne, said he hasn’t gotten a test, either – despite having shortness of breath since March.

“It’s still not easy to get tested unless you are admitted to hospital,” he said.

Without a test, sick residents struggle to get care

Most of the Swedish residents with potential coronavirus symptoms who spoke to Business Insider said it’s difficult to receive medical care without definitive proof that they’re sick.

“I worry that without a formal diagnosis, I won’t get the help I need in the future,” Tunster said. “It’s been tough ‘knowing’ you have the disease that is killing so many people worldwide, and feeling like you aren’t taken seriously.”

A 2015 report from Swedish think tank Health Consumer Powerhouse found that Sweden’s health care system “has a long tradition of steering patients away from taking up time for their doctor” unless a patient is “really sick.”

During the second week of his illness, Tunster was so fatigued, he couldn’t stand. But even then, he said, healthcare professionals told him to drink fluids and call an ambulance if he couldn’t breathe.

Karolin, meanwhile, said her doctor told her she didn’t have the coronavirus because she had been sick for more than two weeks. Scientists are learning, however, that coronavirus patients can be sick for several months.

Karolin joined two online groups for coronavirus patients: a Swedish forum on Facebook, and an American forum on Slack. The American patients, she said, seem to be communicating more often with their doctors and receiving better care.

“If you look at the Swedish group that I’m in, they don’t get scans of the lungs. They get some help, but a very, very small amount,” she said. “It’s not in any way close to the things people talk about in the American group.”

Katrin Rychel, a 41-year-old PhD candidate from from the US, moved to Sweden eight years ago. She told Business Insider she developed a fever, sore throat, body aches, nasal congestion, and chest pain around March 17. Her chest pain still hasn’t gone away.

“I always joke about how every time I try to call the doctor, they just tell me to rest and drink water, even though I’m the kind of person who doesn’t call unless I’m really, really, really sick,” she said. “You constantly have to advocate for yourself.”

Rychel said she’s been told there are no tests available in her city, Uppsala, which is about 30 minutes outside Stockholm. The area is served by Sweden’s oldest university hospital, Akademiska.

“They should have the facilities, but I don’t know why there are no tests,” Rychel said. “The ER doctor said that he heard that there might be someplace in Stockholm that can do it, but he wasn’t sure.” 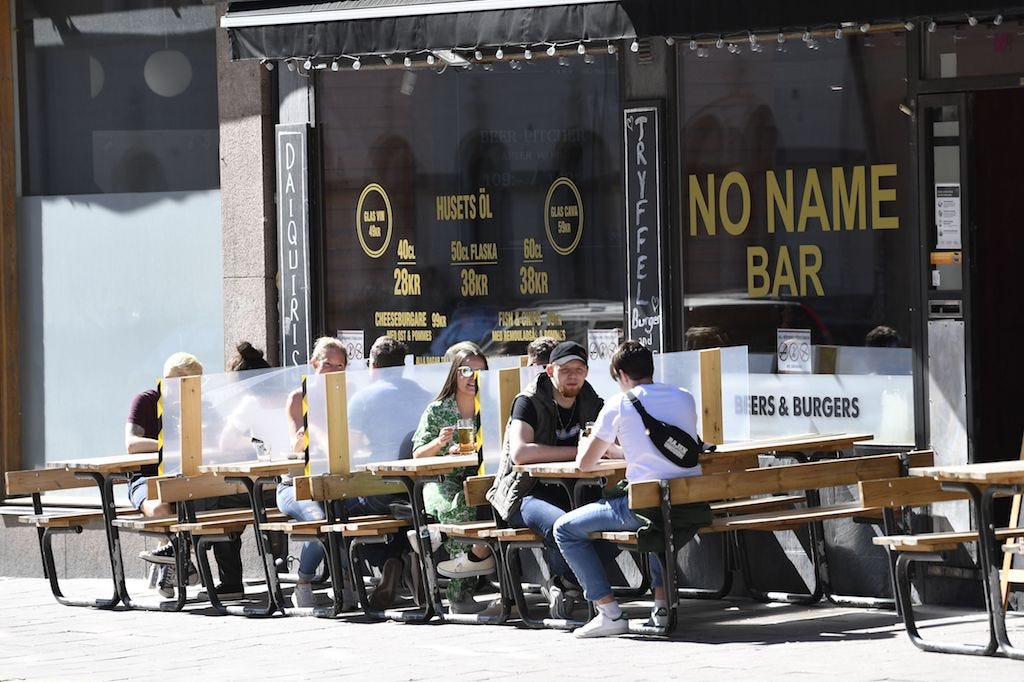 Henrik Montgomery/TT News Agency/AFP/Getty ImagesPeople social distance without wearing masks at an outdoor restaurant in Stockholm on May 30, 2020.

Sweden has more coronavirus deaths per capita than most other countries: around 43 deaths for every 100,000 residents. That’s lower than in Belgium, Spain, and Italy, but more than in Norway, Finland, the Netherlands, and Germany. As of June 2, the US had around 32 deaths per 100,000 residents.

Sweden’s death rate – a calculation that divides the number of coronavirus deaths by the number of cases – is also quite high. Around 11% of people officially given a COVID-19 diagnosis in Sweden have died compared to 6% in the US and 5% in Germany.

Sweden’s high death rate could be partially explained by the fact that around half of the country’s COVID-19 deaths were in nursing homes, and around 88% were people over 70. (The country didn’t ban visits to nursing homes until March 31.)

But Sweden’s low testing capacity could also be inflating its death rate, since the rate tends to drop when widespread testing catches more mild cases.

“They are simply not testing. There is no testing going on at a significant rate compared to any other developed nation,” Marcus Carlsson, a mathematician at Lund University, told Business Insider. “We are totally in the dark. This is not an example to follow.”

Karolin said Sweden’s lack of testing is reflective of a general attitude that the virus isn’t a serious threat.

“We have a lot of deaths, but a common discussion around that is that it’s the elderly,” she said.

Since the start of the pandemic, healthy Swedish residents have been allowed to go to restaurants, bars, parks, and retail stores. Currently, Sweden’s public-health agency does not recommend face masks for the public. Vulnerable groups, including the elderly, have been urged to stay home. But schools have remained open.

When she first developed symptoms, Rychel said, she called Vårdguiden to ask if she should keep her kids home. She was concerned they could pass the illness to others, but the health line told her not to worry.

“They’re like, ‘No, just send them to school. They don’t have symptoms. They’re fine,'” Rychel said. “I felt really uncomfortable about that.” 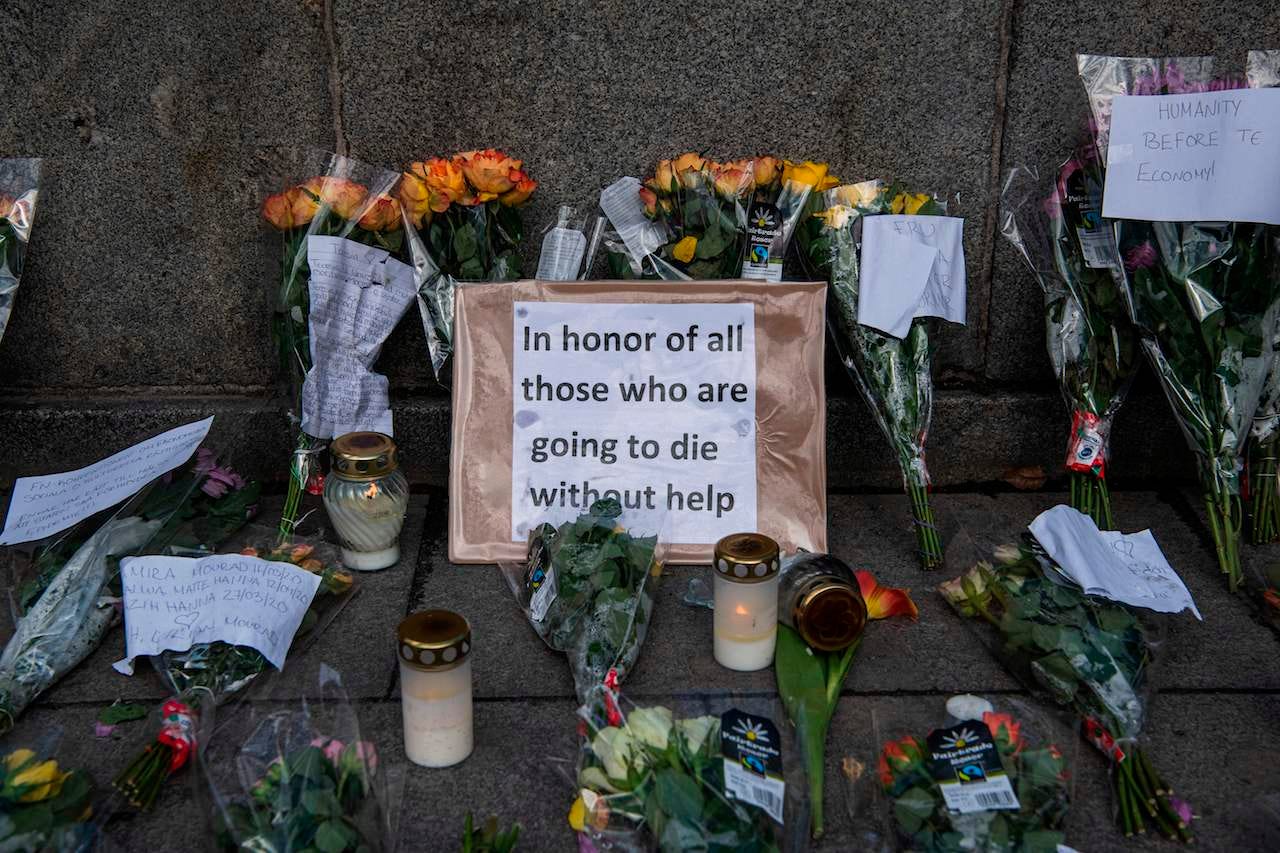 Katharina, who is originally from Germany, said she has thought about returning there to receive better care.

“I really love the Swedish system, but I don’t understand what’s happening here,” she said. “People know by now that something didn’t work out right.”

Even at the supermarket, she said, she often sees people ignore social-distancing guidelines.

“It’s not so difficult here to keep social distance,” Katharina said. “You have so much room here. So many people didn’t have to die.”

“I’m trying to educate my friends who are out and going to bars,” she said. “I’m like, ‘You guys, you really need to be smart about this, because you think that you’re young and you won’t get it, but you can turn out like me.'”

But Karolin said she has found it difficult to convince friends that she might have the coronavirus.

“People that are like me, we don’t exist,” Karolin said, referring to those who haven’t tested positive but show symptoms. “If I talk to friends and family, it feels almost like they don’t trust me anymore.”

To be safe, Karolin said, she is self-isolating in a hotel. Her teenage son is still at home, and on Thursday, he finished his second year of high school. For now, she’s decided not to congratulate him in person.