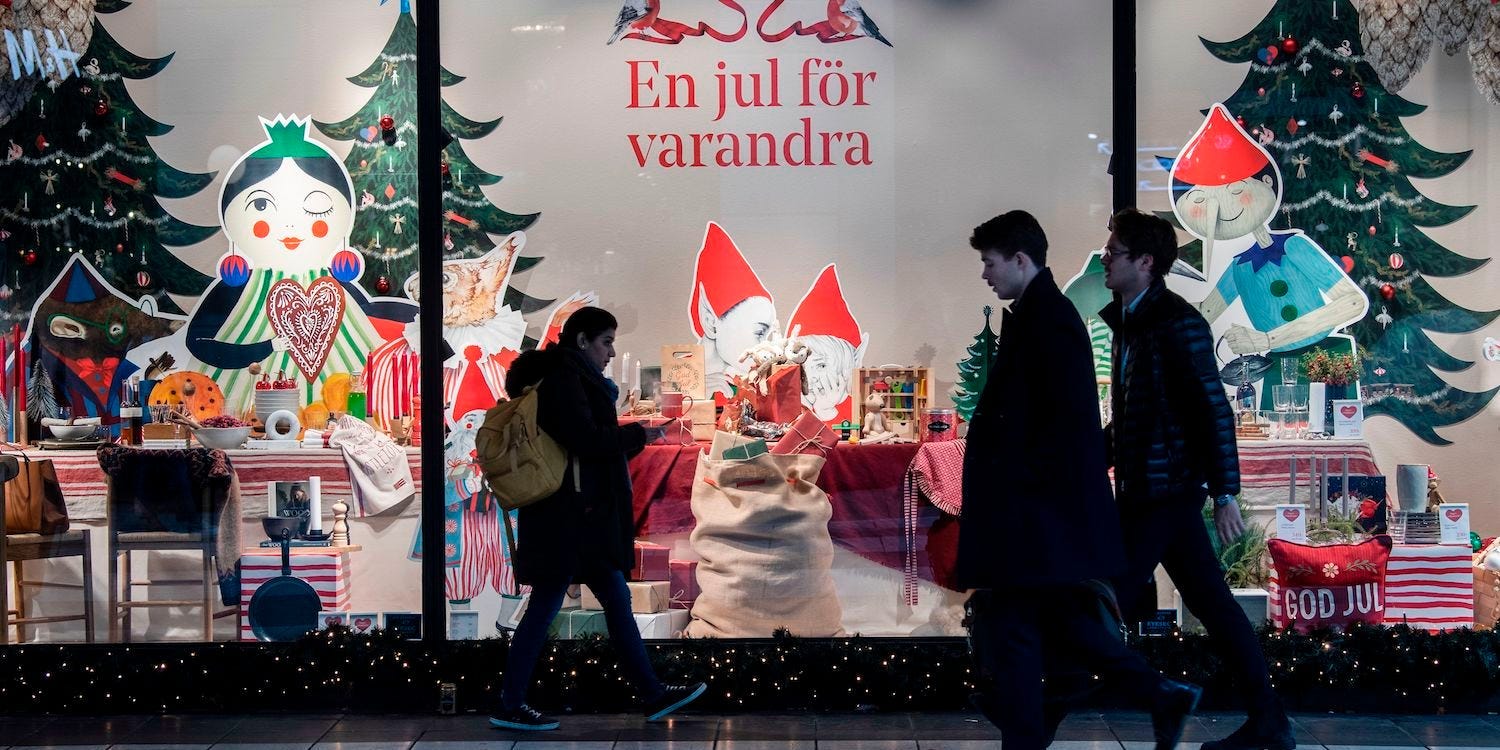 Ines Green felt a sense of relief after Sweden announced stricter coronavirus measures for the first time since the start of the pandemic.

The 23-year-old supermarket worker, who lives in the capital city of Stockholm, has been watching anxiously as people around her continue to live their lives despite a surge in new COVID-19 cases.

“At my work, I have come to see that people don’t care at all. It’s so crowded, people are not really distancing or wearing masks, and when they ask me for help, they stand really close to me,” Green told Business Insider.

“So I was pleased to see the government announced new restrictions. I think people realised that things were getting out of control,” she added.

Sweden chose a unique strategy at the beginning of the pandemic, opting to follow a no-lockdown policy that favoured loose recommendations and consent over strict rules.

The country’s chief epidemiologist, Anders Tegnell, was confident the plan would drive down infection numbers by the autumn while building up immunity among the population. 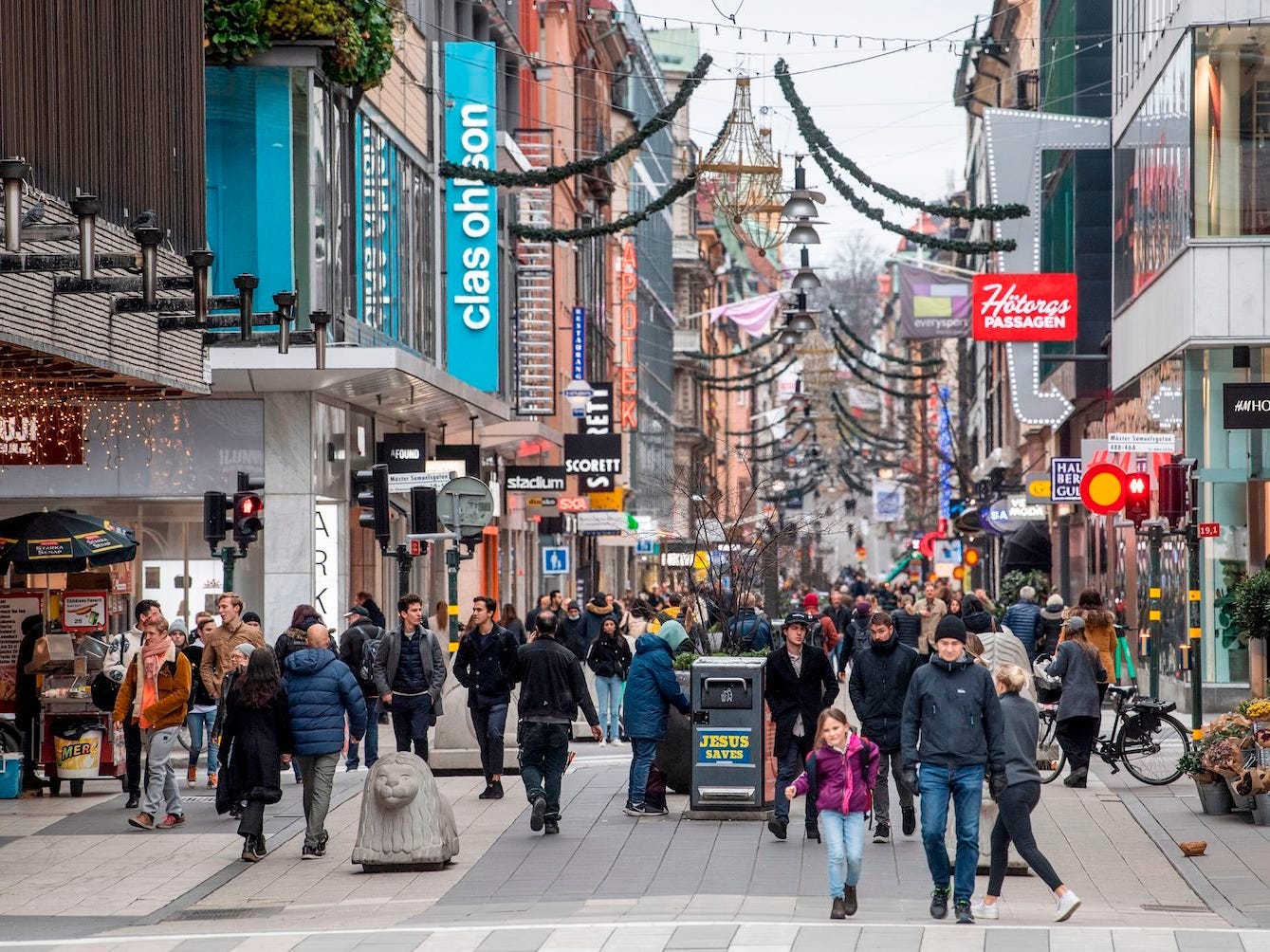 But the outcome has been far worse than predicted.

During Europe’s first wave, Sweden’s death rate rose to among the highest globally, with most of those deaths among the elderly and in care homes.

In recent weeks, after getting the virus under control, Sweden â€” like much of Europe â€” has seen a dramatic resurgence.

The country’s rate of new infections is now more than double that of earlier this year, and its total number of deaths â€” 6,681 â€” exceeds those of neighbouring Norway, Denmark, and Finland combined, according to a tracker by Johns Hopkins University.

As a result, some of Sweden’s regions started implementing stricter rules. And then, earlier this month, officials announced the strictest national rules yet, including limiting public gatherings to eight people (from 50) and introducing a ban on the sale of alcohol after 10 pm in restaurants and bars.

“People knew the restrictions were coming, even younger people. It just makes so much sense; it’s not a full lockdown, but it’s also not a light lockdown either â€” it’s a good middle ground,” Green said.

Business Insider spoke to 9 other people living across the country to see how they feel about the changes. They were all happy that rules had been tightened â€” but some viewed it as too little, too late.

Mikaela Eklund, a 24-year-old social worker who lives in Gothenburg, said the measures were “very much needed.”

“At this point, it’s quite clear that with the second wave, we really need to do something,” she said.

But she was still shocked to find that they had to be imposed in the first place.

In May, chief epidemiologist Tegnell predicted that the number of infections in the autumn would be “quite low” due to the country’s herd immunity approach.

However, as hospitalizations continue to increase, Tegnell was forced to acknowledge that the high number of cases seen in the first wave had not protected the country in the second wave.

Earlier this week, Tegnell also admitted that experts had seen no signs of immunity in the population slowing down the rate of infection right now. 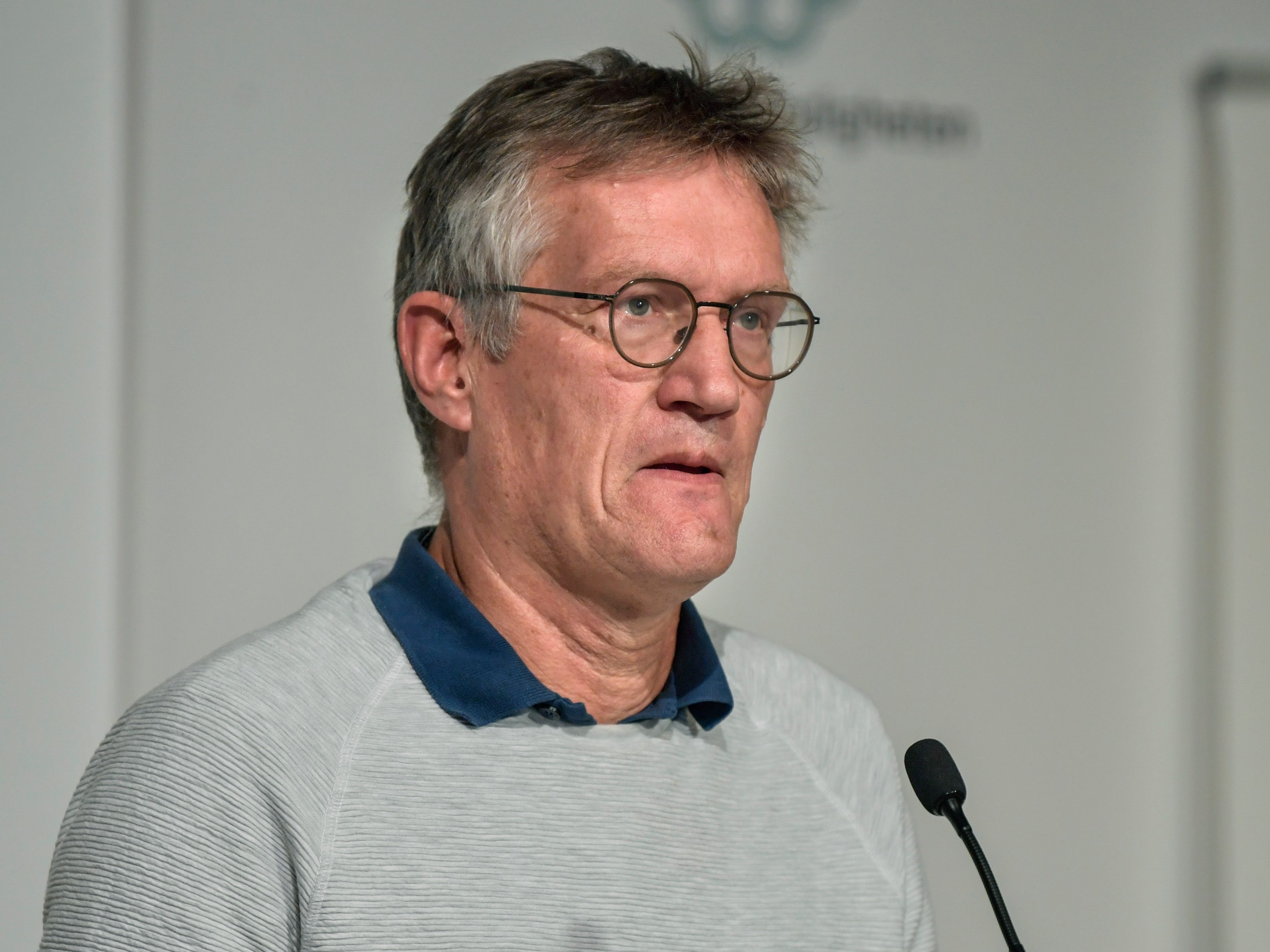 “I’m surprised we’re having a second wave since we were told all along by our experts that we won’t have a large number of new cases, but now we do,” Eklund said.

“So when I saw the cases are going up, it made me think about how much I should trust the experts. I understand that everyone is trying to do their best right now, but it leads to a different type of uncertainty,” she added.

“I think the government might be a bit embarrassed over the fact that they were wrong,” Eklund said.

The government recommendations can be confusing

Mikael Olson, an engineering student, living in Lund, was also “somewhat surprised” about the latest resurgence of COVID-19 cases, telling Business Insider he felt people got “too careless” during the summer months.

But Olson also said the government’s messaging â€” which has mostly been based on advice â€” has contributed to people’s relaxed attitudes.

“I think the messaging has been quite confusing. The recommendations are always changing and can be quite contradictory,” the student said.

“You’re watching numbers go up, but everything the government says is based on advice, so sometimes you don’t know what you should or shouldn’t do,” said Olson.

In line with its no-lockdown policy, shops, restaurants, bars, parks, and schools in Sweden remain open and the high-trust country is still mostly relying on official advice.

But as the months stretch on and cases continue to rise, some of these guidelines â€” including visitations to care homes â€” haven’t been as clear as people had hoped, leading to growing uncertainty among locals.

Cathy Xiao Chen, who helps lead a coworking space in Uppsala, also said the government’s messaging has led to confusion.

“I feel like the government is sending quite conflicting messages. From a business perspective, it’s very difficult to manage the situation,” Chen said.

“Despite people being told to stay away from public spaces, businesses are not being told to close down, and are not offered additional financial assistance to ensure that they can remain operational at the end of this,” she added. 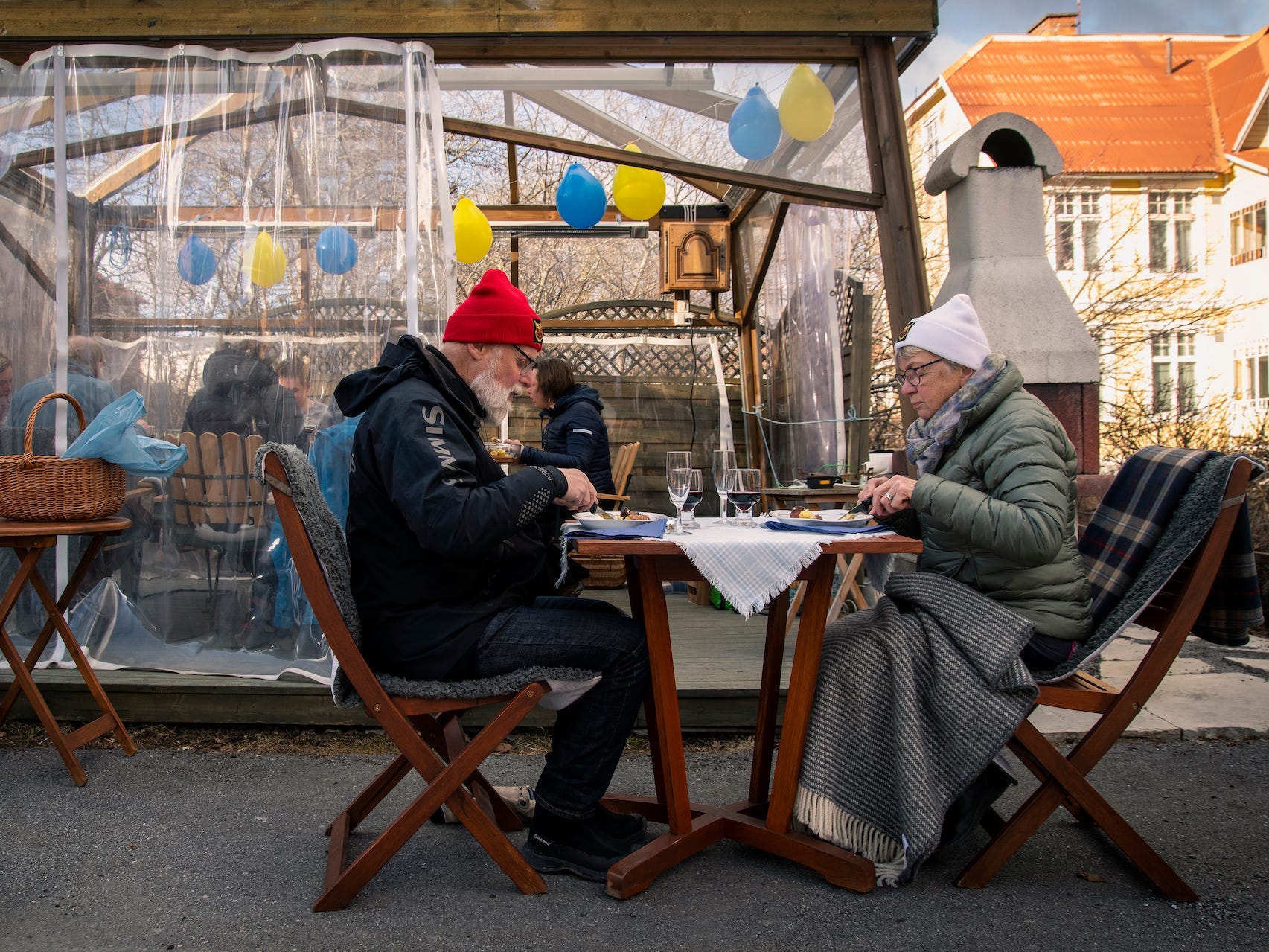 David Lidstrom/Getty ImagesA senior couple eat dinner keeping distance from the rest of their family during the coronavirus pandemic on April 18, 2020 in Ostersund, Sweden.

Many of the people that Business Insider spoke said that Swedes were good at following recommendations without needing firm, enforced rules.

But others are sceptical that the latest measures will make much of a difference.

Axel Berggren, who works in communications in Stockholm, told Business Insider that he noticed more people were following recommendations compared to earlier in the pandemic but added: “I don’t really think that closing bars at 10 will make much of a difference, to be honest, people will always find ways to meet up and drink.”

And Keith Begg, who lives in a Stockholm suburb and has started a campaign against Sweden’s coronavirus response, told Business Insider there are “serious shortcomings” to the latest measures that have caused even more confusion.

Begg described the new measures as a “smokescreen” to mask government “inaction” on the virus, adding: “On the one hand Stefan LÃ¶fven, the Prime Minister of Sweden, is stressing the importance of not visiting cafes, bars, gyms, and restaurants but on the other hand they are all open.”

“It is like advising someone not to jump off a cliff and then pushing them over the edge,” Begg said.

Soaring deaths in care homes marked Sweden’s first wave and health officials quickly admitted they had failed the elderly population, promising to step up protections in the future.

But despite this acknowledgment, deaths in care homes are now spiking again. 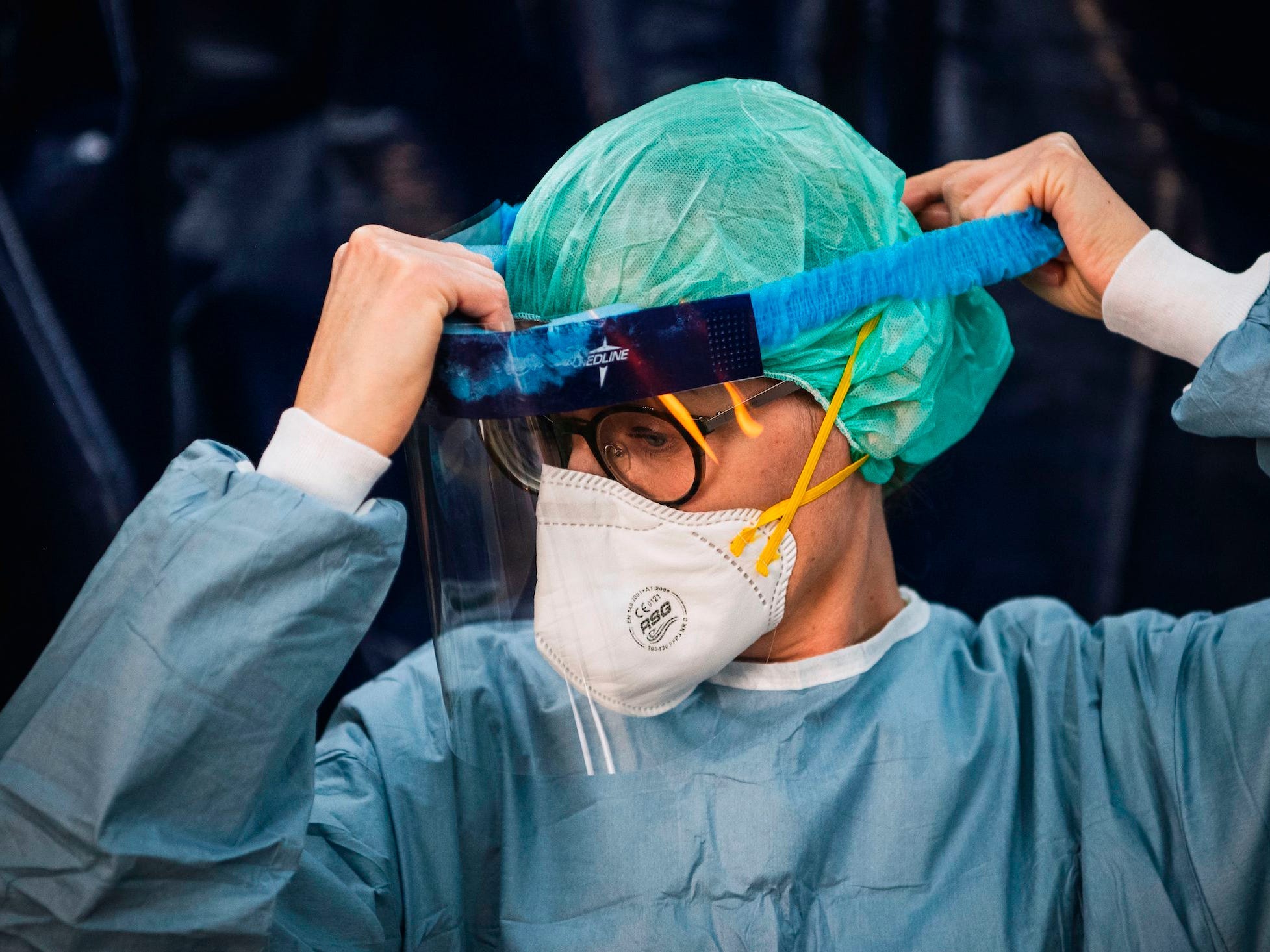 Jonathan Nackstrand/AFP via Getty ImagesNurse Renee Jarvalt puts on her personal protective equipment (PPE) in a tent on the grounds of the Sophiahemmet private hospital, before she performs tests on a patient to see if she has symptoms of COVID-19, on April 22, 2020 in Stockholm, Sweden.

“One feature of the Swedish COVID-19 strategy seems to be the acceptance that the country will have a high death and infection rates, but a complete reticence to protect the most vulnerable in society,” Begg said.

“Overall, in my nine months of witnessing the ineptitude and negligence of the Swedish strategy, what has struck me the most is the scientific, ethical, and moral bankruptcy that has taken place in COVID-19 Sweden. But worst of all, no one has been held accountable for the disastrous decisions made,” he added.

Other experts have previously noted to Business Insider that Sweden’s general lack of restrictions contributed to the virus getting into care homes.

Mazdak Dorosti, who works in banking in Stockholm, said: “I think the main Achilles heel in the Swedish strategy compared with other Scandinavian countries, was how we dealt with retirement homes.”

“Compared with other Scandanavian countries, our retirement home structure isn’t working well and COVID-19 brought that to light. That’s the only area I believe we could have done a better job in,” Dorosti added.

‘I don’t see a major change’

Sweden’s strategy has been viewed as an outlier compared to the rest of the world’s response.

But many there say their lives have not been that different to those in other countries because, they claim, Swedes have been so good at following recommendations, meaning harsh rules to enforce those recommendations simply haven’t been as widely needed.

Karin Beland Lindahl, an associate professor at Lule University of Technology, emphasised how Sweden is a high-trust country, meaning people tend to follow government and experts’ rules and recommendations.

This reality means that Sweden’s strategy, even if it goes poorly, would still likely have better results than if the same strategy would be used in countries like the US.

She said the new rules were meant to address some people who had been breaking the rules but don’t change much for most people in the country, who were already distancing and minimising their interactions.

“I think there are tougher regulations now because people are not as receptive during the Spring, especially younger people,” she said. 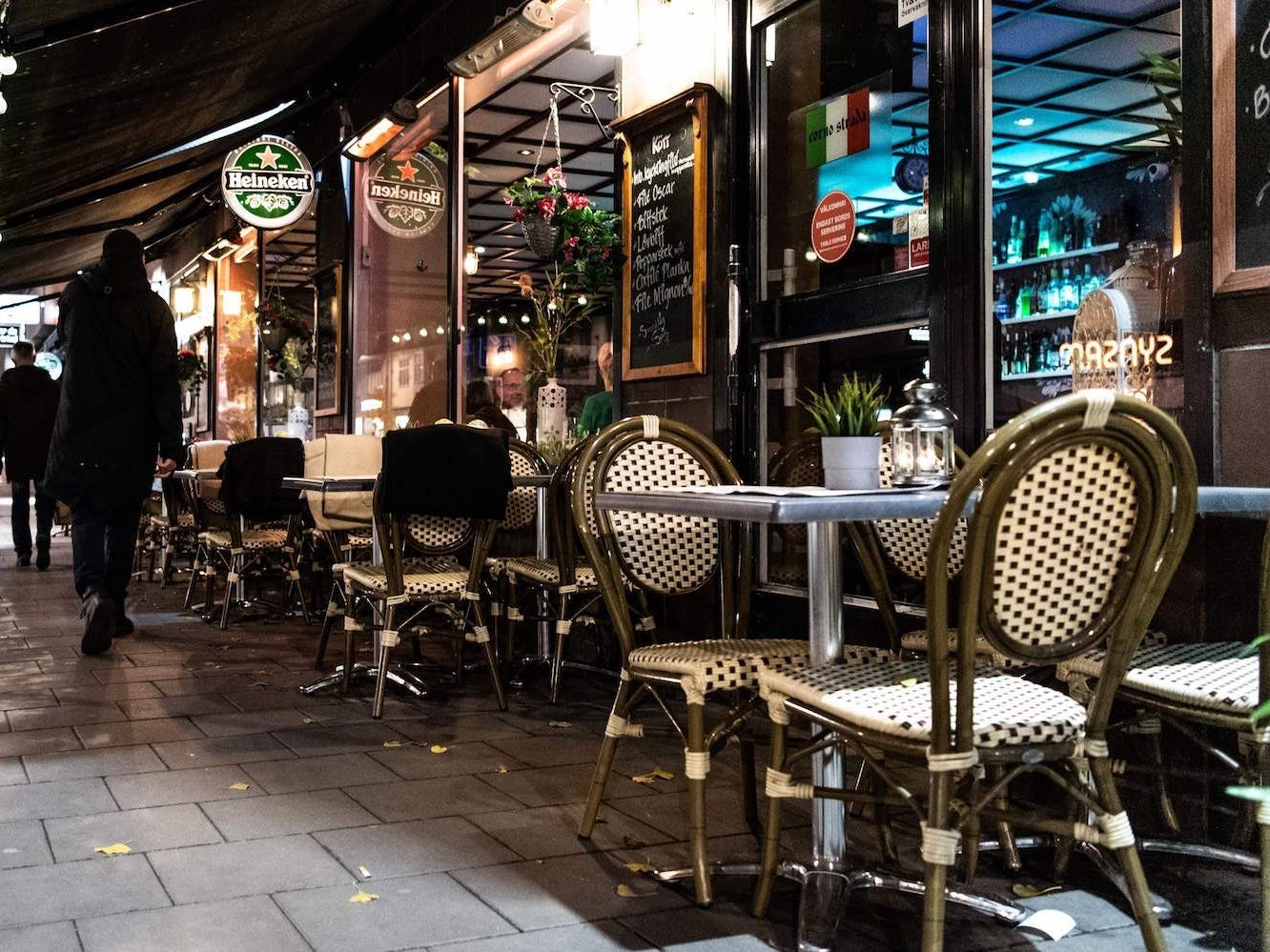 But in general, life hasn’t changed much for Lindahl: “I think the idea that we have changed our strategy and become more like other countries is the perception of critics, rather than the perception of Swedes,” she added.

Lindahl also noted that some rules and recommendations had actually been eased: the elderly were no longer told to isolate, and universities are now open, while they were closed in the Spring.

Others have noticed more significant changes.

He said the move was necessary as people had grown more complacent with distancing: “I do believe, like in most other countries, people have pinned their hopes on a vaccine saving the day and have unfortunately acted as if it was imminent.”

Face masks are a hotly-debated topic

Many of the people Business Insider spoke to for this article said they have felt judged by others for wearing one. 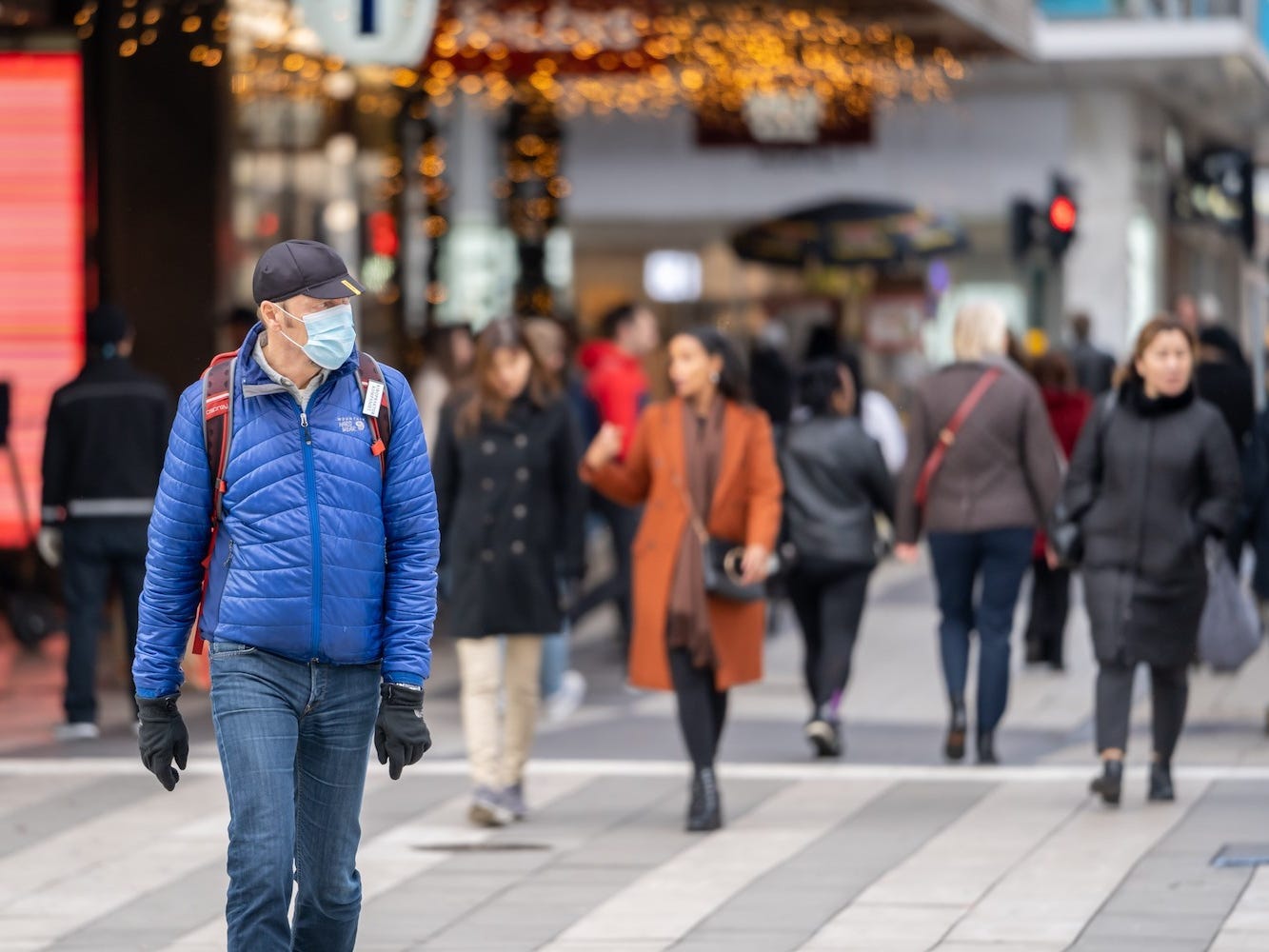 Xinhua/Wei Xuechao via Getty ImageA man wearing a face mask walks in the street during the COVID-19 pandemic in Stockholm, capital of Sweden, on November 3, 2020

Face coverings have become a hotly-debated topic in the country in recent weeks. Tegnell continues to argue that he hasn’t seen any convincing studies yet that show they are beneficial in stopping the virus’s spread.

But as they continue to become the norm in other countries, more Swedes are now buying more face masks.

Lukas Dahl, who works for a startup in Stockholm, told Business Insider that he thinks Sweden’s policy still seems “a bit too relaxed.”

When asked about how he thinks Sweden has done compared to other countries during the pandemic, Dahl says that it’s still too early to make any conclusions â€” an opinion shared by many of those interviewed by Business Insider.

“I’m happy with the overall decisions that have been made,” said Dahl. “I respect their judgment call and I think we’re going to come out ahead and that we will do better in the long run.”