As coronavirus cases surge to a record, the Trump administration's top doctor says some places likely opened up too early 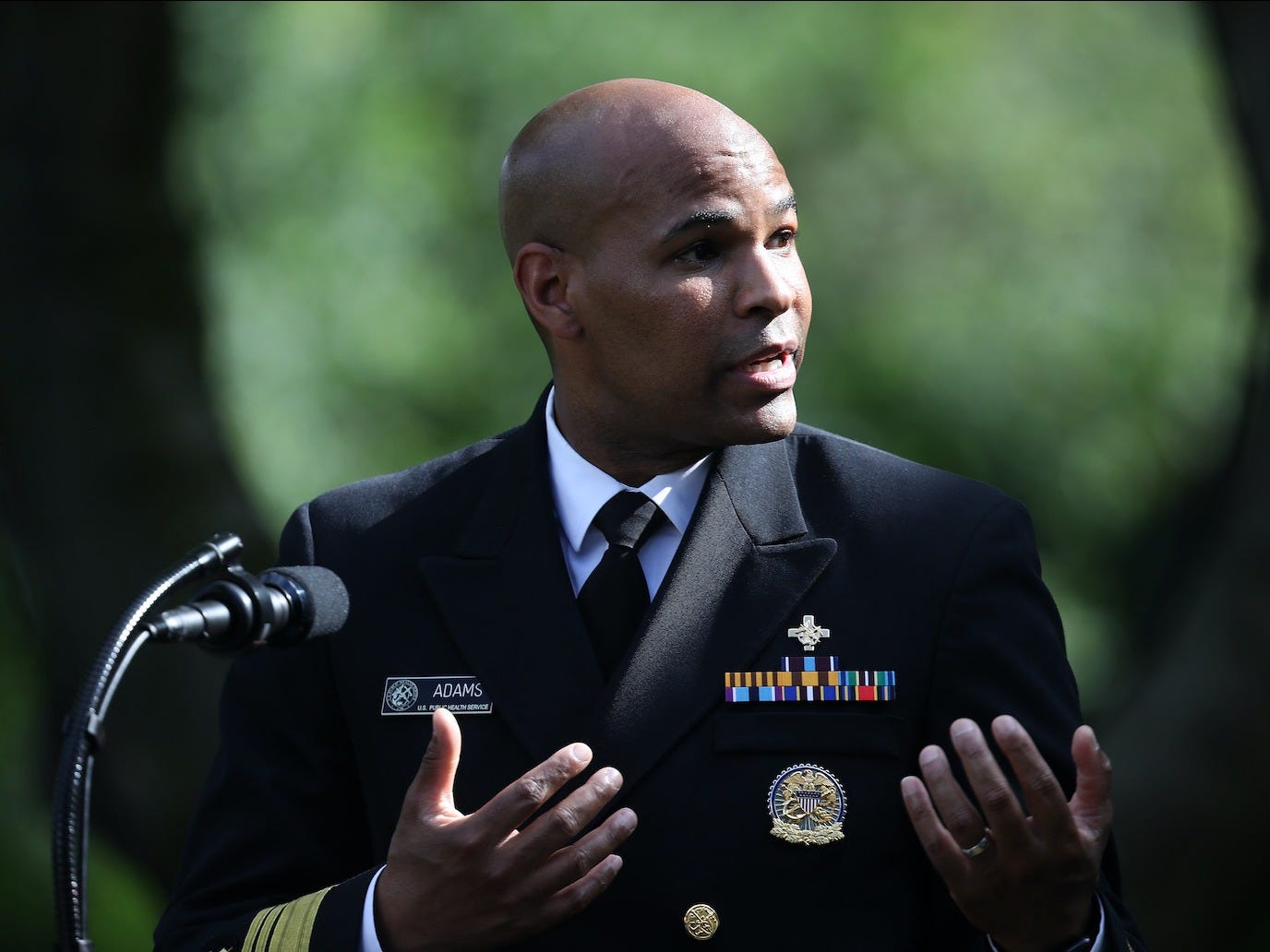 New coronavirus infections in the US shot to an all-time high of 40,000 in a single day this week, leading many critics to say governors were re-opening their states too early.

But in an interview with Business Insider, Surgeon General Jerome Adams said that the surge shouldn’t be attributed to a single reason. He said that while official decisions to reopen are contributing to the surge in some places, individuals’ decisions to stop social distancing or to not wear masks are playing a big role, too.

“In some places it may be because they did in fact reopen too early,” he said. “In other cases it may be that they reopened right on time and that the governmental institutions and public health institutions did everything right, but that the citizens did not have the will or desire or the follow through to do the social distancing that we have recommended, and to wear coverings as we have recommended.”

As the nation’s top doctor, Adams is responsible for getting the word out about how people can improve their health. He also oversees 6,000 public health service members that work throughout the government.

Localised outbreaks or a widespread surge

Asked which states he thought opened too early, Adams wouldn’t name any. Coronavirus cases are climbing in more than half of states, and many decided to begin reopening without meeting the criteria set out by the White House, Business Insider’s Aria Bendix previously reported.

Adams stressed that the Trump administration is looking at outbreaks at the county level.

On Friday, the Coronavirus Task Force, which is overseen by Vice President Mike Pence, held its first press conference in two months. Officials showed reporters a map of outbreaks by county, which the vice president said was the best way to find and curb hotspots.

While the Trump administration has stressed that the recent outbreaks are localised, congressional Democrats and some prominent epidemiologists have urged the White House to enact a nationwide plan to stomp out the virus.

Dr. Anthony Fauci, the government’s top infectious disease expert who is also on the coronavirus task force, warned at the same press conference Friday that localised outbreaks can still become bigger problems elsewhere. “The only way we’re going to end it is by ending it together,”he said.

Adams, who is a member of the task force, also stressed addressing outbreaks locally. He told Business Insider that the bulk of the surge in Arizona, for instance, came from one county. Some states could attribute their outbreaks to specific workplaces, such as meatpacking plants, he said.

“It’s different everywhere, and we are digging into the causes in each of those particular areas,” he said.

Pence said Friday that 16 states were seeing worrisome coronavirus increases. The US is conducting about 500,000 tests a day, which is helping to identify people with the virus even if they don’t have symptoms. Young people are accounting for much of the surge.


Read more:
Trump is counting on states to figure out how to fight the coronavirus. We got an exclusive look at how 8 states are laying plans for widespread testing to halt the pandemic and reopen businesses.

The surgeon general said people are getting tired of shutdowns

Adams said part of the reason the surge is happening in young people is that for months the pandemic hadn’t been as obvious in some parts of the US. Even though there was a nationwide shutdown, not every community experienced a severe outbreak. As more states reopen, some communities are experiencing that “first wave” only now, he said.

“A lot of people never really saw that first wave in any part of their country, but they were putting in the work,” Adams said, referring to businesses being shut down and people being asked to stay at home. “And so now they both don’t really feel that this is something that’s meaningful and tangible in their life as a risk, but they also were tired of doing it.”

He said some people have become sick of coronavirus-related restrictions, and want to resume their normal lives.

“If you’re in middle America and you never really experienced the first wave, all you know is that you were locked down and had to cancel your spring break and miss school and miss your graduation and no one around you got COVID-19 – and now you’re sick and tired of it and you didn’t see a bit of tangible benefit from it in your day-to-day life, and you just want to get back to normal,” he said.

Adams said it’s important for public health officials to get the word out about how following public health measures would get the US back to normal sooner. He said that because the virus is better understood now than a few months ago, each states could evaluate how much to tighten or loosen restrictions.

He said that approach – pointing out the benefits of wearing masks and social distancing – is more effective than shaming people for their behaviour.

In Texas, the outbreak became so severe this week that Republican Gov. Greg Abbott decided to pause the state’s reopening.

Adams praised Abbott for taking action to curb the state’s outbreak. He said the actions in Texas were “exactly what we would want to happen from a response standpoint,” specifically honing in on how the governor asked hospitals to put off elective surgeries.

But he also said there needs to be a balance in certain areas, because other healthcare needs had gone unmet during widespread shutdowns. People had put off prenatal care, vaccines, and cancer screenings, he said.


Read more:
Doctors are getting creative about how they care for their patients amid the pandemic. 3 physicians share what they’re doing – and the challenges they still face.

“Initially, it was shut down, no matter the cost, because the cost of COVID was too great based on what we saw in Italy and people dying in hallways and people not being able to get on a ventilator,” he said. “We’re now starting to see the cost. Every 1% increase in unemployment results in a 1.3% increase in people taking their life by suicide. 4.2 million children have missed vaccinations because of the shutdown.”