Amy Coney Barrett's nomination hearing is underway. Here are some of the most contentious Supreme Court nominations in US history

The battle to get Amy Coney Barrett, President Donald Trump’s nominee to the Supreme Court, confirmed by the Senate is underway.

Contentious Supreme Court hearings are not new in Washington â€” in the past half-decade, they have been some of the most politically charged and closely watched events on Capitol Hill.

But it wasn’t always that way. Many say the modern-day fight for the nation’s highest court started with the confirmation of Robert Bork, who was nominated by President Ronald Reagan t in 1987.

We take a look back at some of the most bitter battles that have taken place in the history of nomination hearings, from Bork to Barrett. 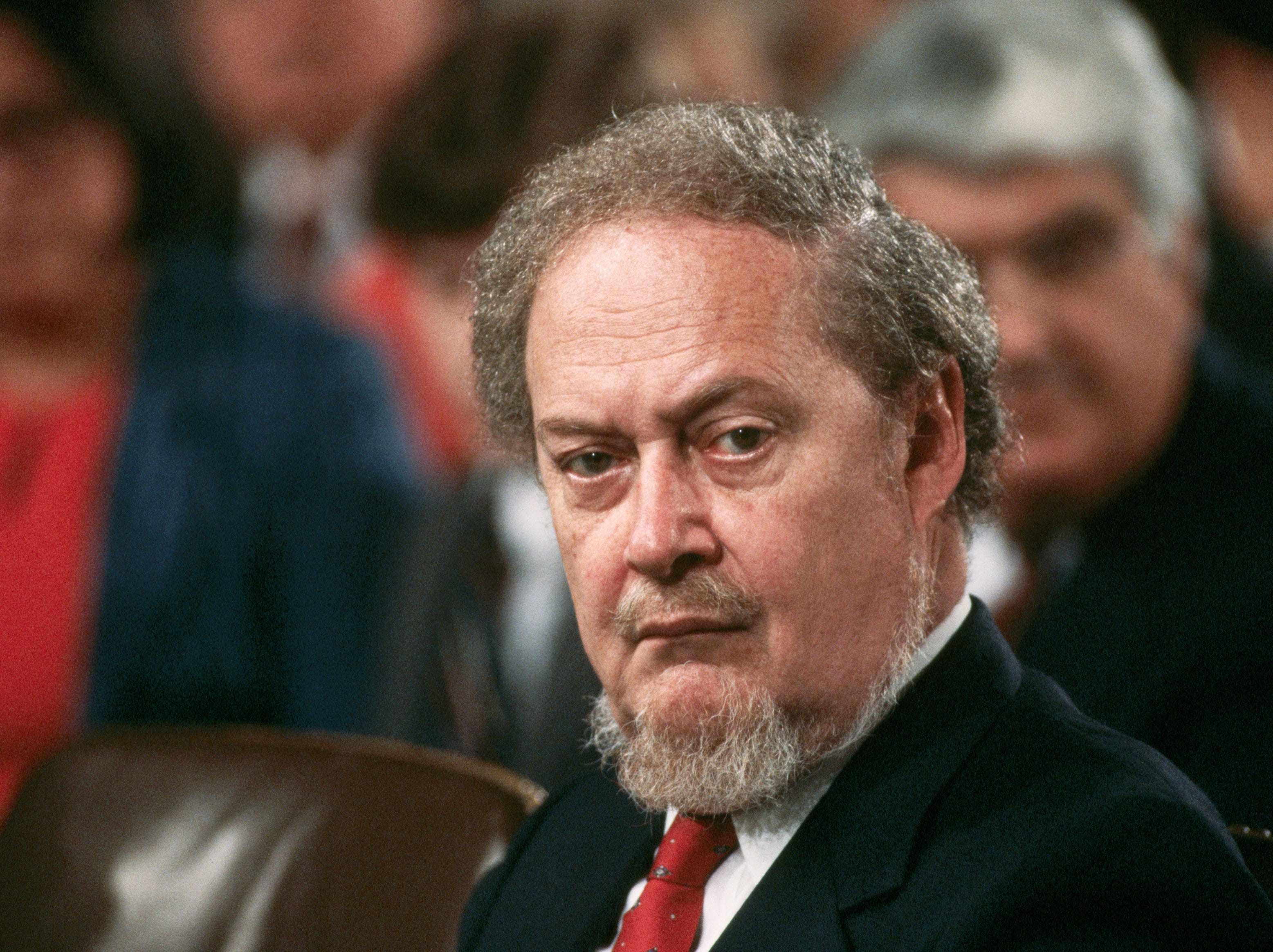 Wally McNamee/CORBIS/Corbis via Getty ImagesJudge Robert Bork testifies before the Senate Judiciary committee on his nomination to be a Supreme Court Justice.

Robert Bork’s controversial points of view set off one of the first efforts to derail a Supreme Court nominee in US history in 1987.

Bork taught at Yale University, and his legal career was filled with controversial statements and writings.

He opposed the Civil Rights Act of 1964, which required hotels, restaurants, and other businesses to serve people of all races. He also opposed Griswold v. Connecticut, a 1965 Supreme Court decision that struck down a law banning contraceptives for married couples, saying there is no right to privacy in the Constitution. He also opposed Supreme Court decisions on gender equality.

Democrats launched an aggressive campaign against his confirmation, led by Senator Ted Kennedy of Massachusetts. Within hours of the nomination, Kennedy condemned the nominee with a speech that touched on issues that are still contested today:

Delaware Democrat Joe Biden was the head of the Senate Judiciary Committee at the time. He originally supported Bork’s nomination, but later changed his mind. Liberal groups followed up with mass mailings, lobbying, newspaper and TV ads.

The Senate ended up voting against Bork’s confirmation. It’s a result that still angers conservatives, who believe Bork was a brilliant jurist who was treated unfairly.

After this hearing, a new verb was born. According to Merriam-Webster, “bork” means “to attack or defeat a nominee or candidate for public office unfairly through an organised campaign of harsh public criticism or vilification.”

Clarence Thomas’ nomination became heated after he was accused of sexual misconduct. 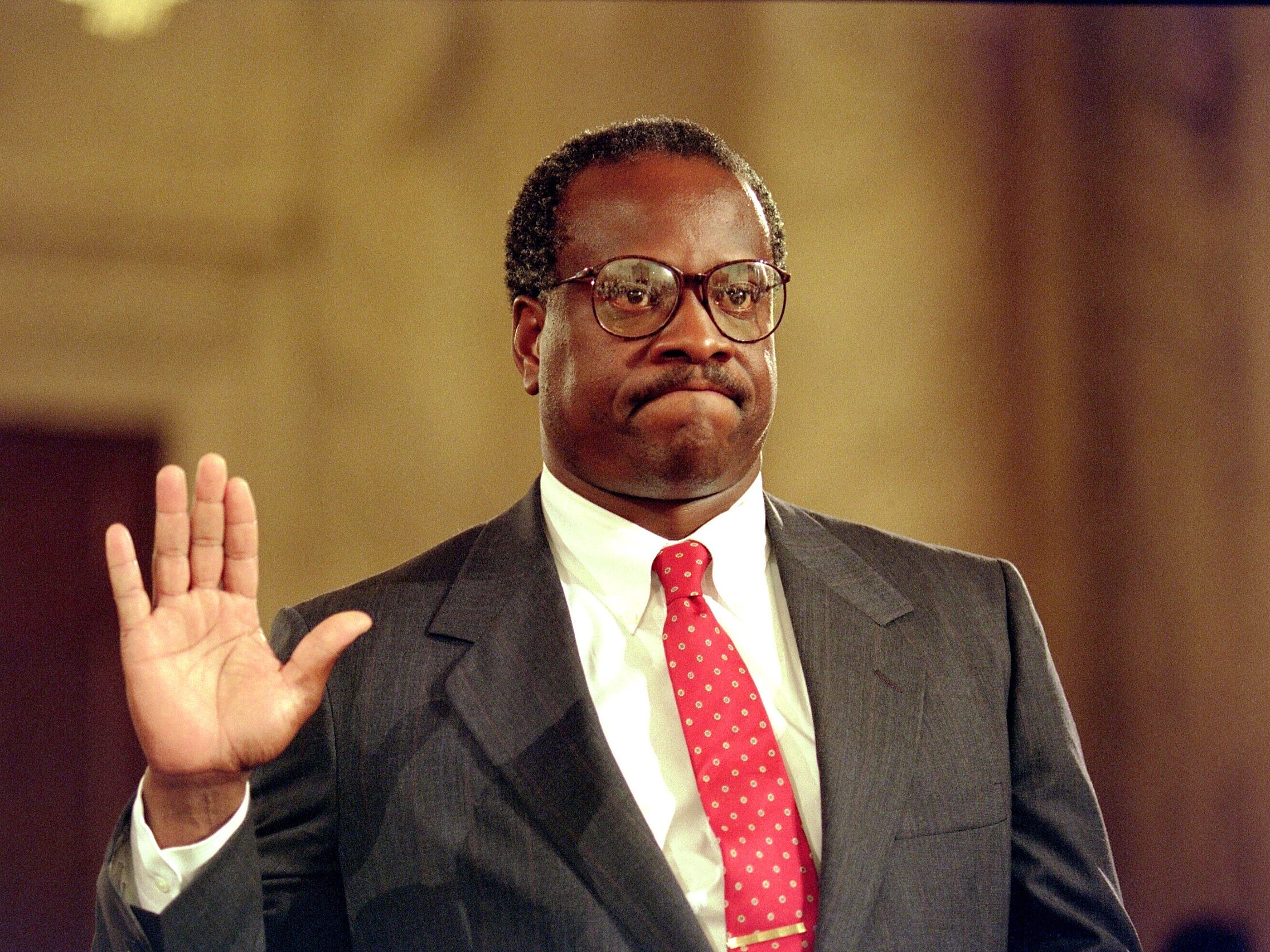 J. DAVID AKE/AFP via Getty ImagesClarence Thomas was accused of sexual misconduct by a former aide.

In 1991, Supreme Court Justice Thurgood Marshall, a liberal who had fought for school integration, retired. He was also the Court’s first Black justice.

Thomas appeared to be on a smooth path to confirmation. But then, a report of a private interview of Anita Hill by the FBI was leaked to the press.

Hill was called to testify. During her hearing, the civil rights lawyer accused Judge Thomas of workplace sexual harassment. Hill said he repeatedly asked her to go out with him in a social capacity and would not take no for an answer when he was her supervisor at two federal civil rights departments.

Judge Thomas denied the accusations. And he made it through, but just barely. His nomination slid by with just four votes, and he replaced Marshall on the bench.

Merrick Garland, the nominee of Barack Obama, didn’t even get a hearing from Republicans. 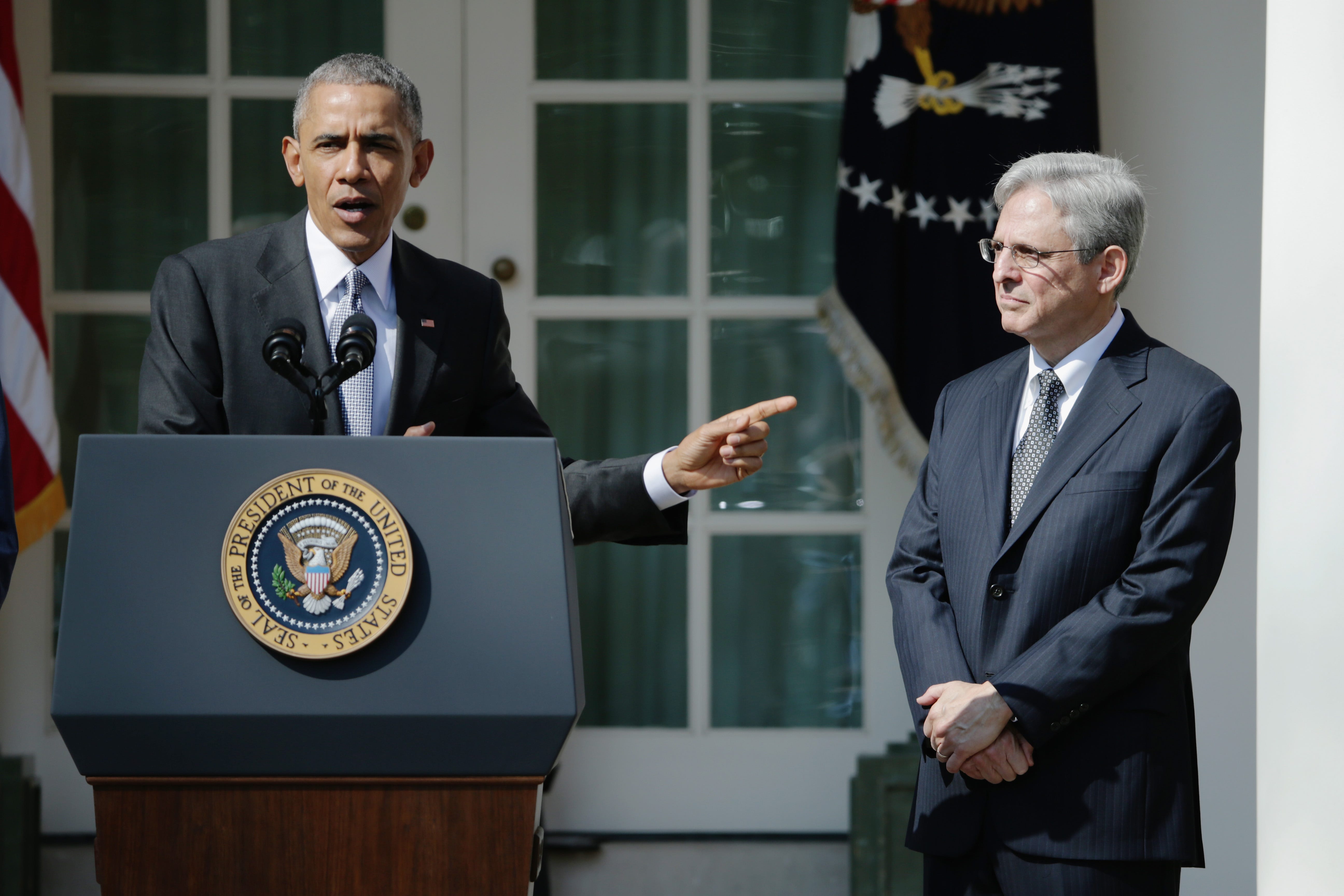 Garland was the chief judge of the U.S. Court of Appeals for the District of Columbia. Obama thought he was a safe choice, even with a Republican-led Senate. But as Democrats had done 29 years earlier, Republicans came out in full force against Garland.

Senate majority leader Mitch McConnell said the next Supreme Court justice should be chosen by the winner of the election that was nine months away.

If Garland had joined the court, it might have tilted left. Instead, Gorsuch took the court in the opposite direction. 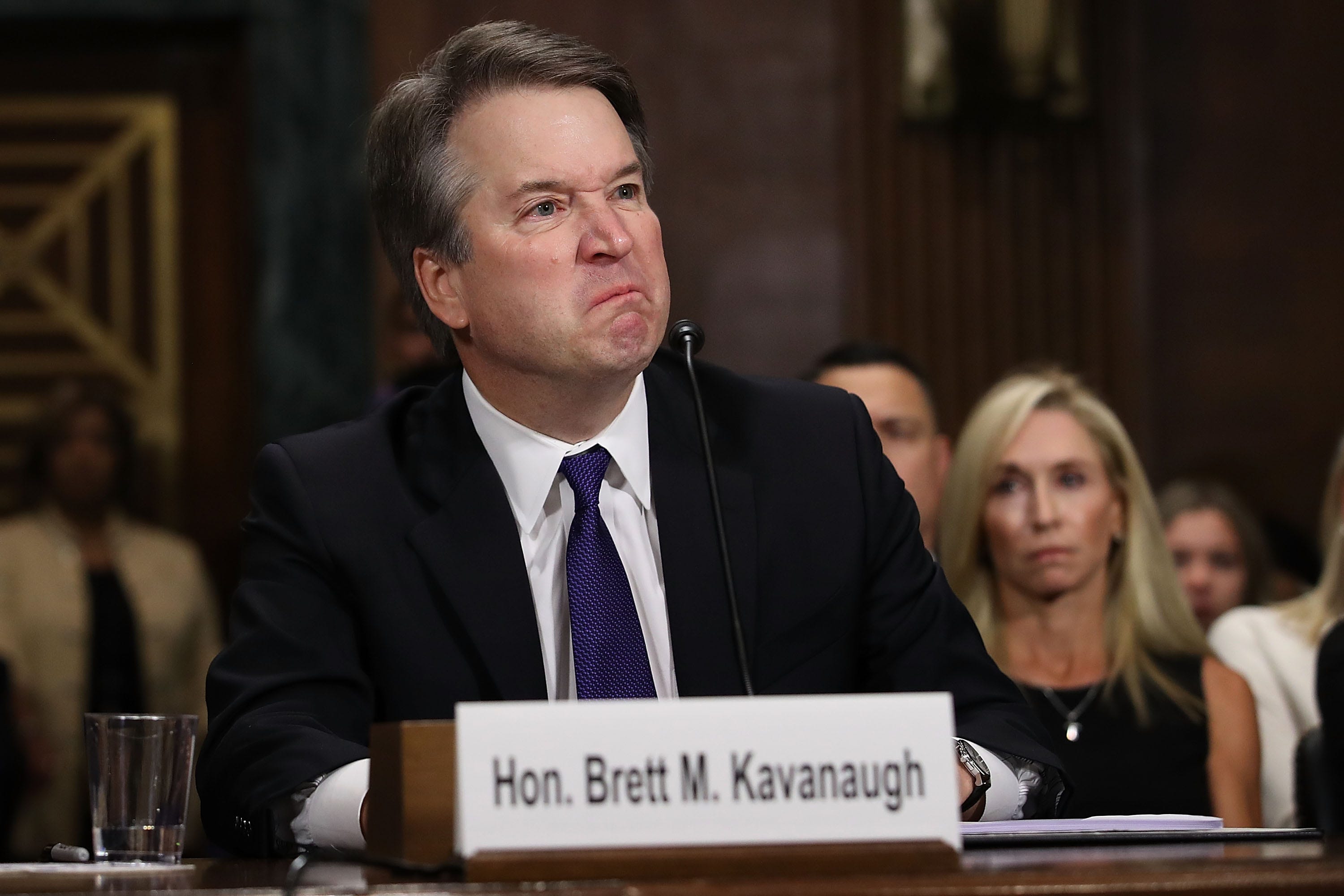 Win McNamee/Getty ImagesBrett Kavanaugh was accused of sexual assault by a former classmate before being approved for the court.

Trump’s next pick was Brett Kavanaugh. Within days of his nomination, a psychology professor said he’d assaulted her in high school.

In what turned into a national spectacle, Christine Blasey Ford testified before the Senate Judiciary Committee:

Kavanaugh denied these claims and accused Democrats of trying to “Bork” his nomination.

He also characterised the hearings as a political conspiracy against him â€” but as Senator Kamala Harris pointed out, Trump’s other nominee Neil Gorsuch was approved by the same legislative body in 2017.

Blasey Ford’s testimony moved the nation, with even Trump initially calling her “very credible.” But the FBI did not reach any conclusion in its background investigation, and in the end, a 50-48 vote secured Kavanaugh a lifetime seat on the court. 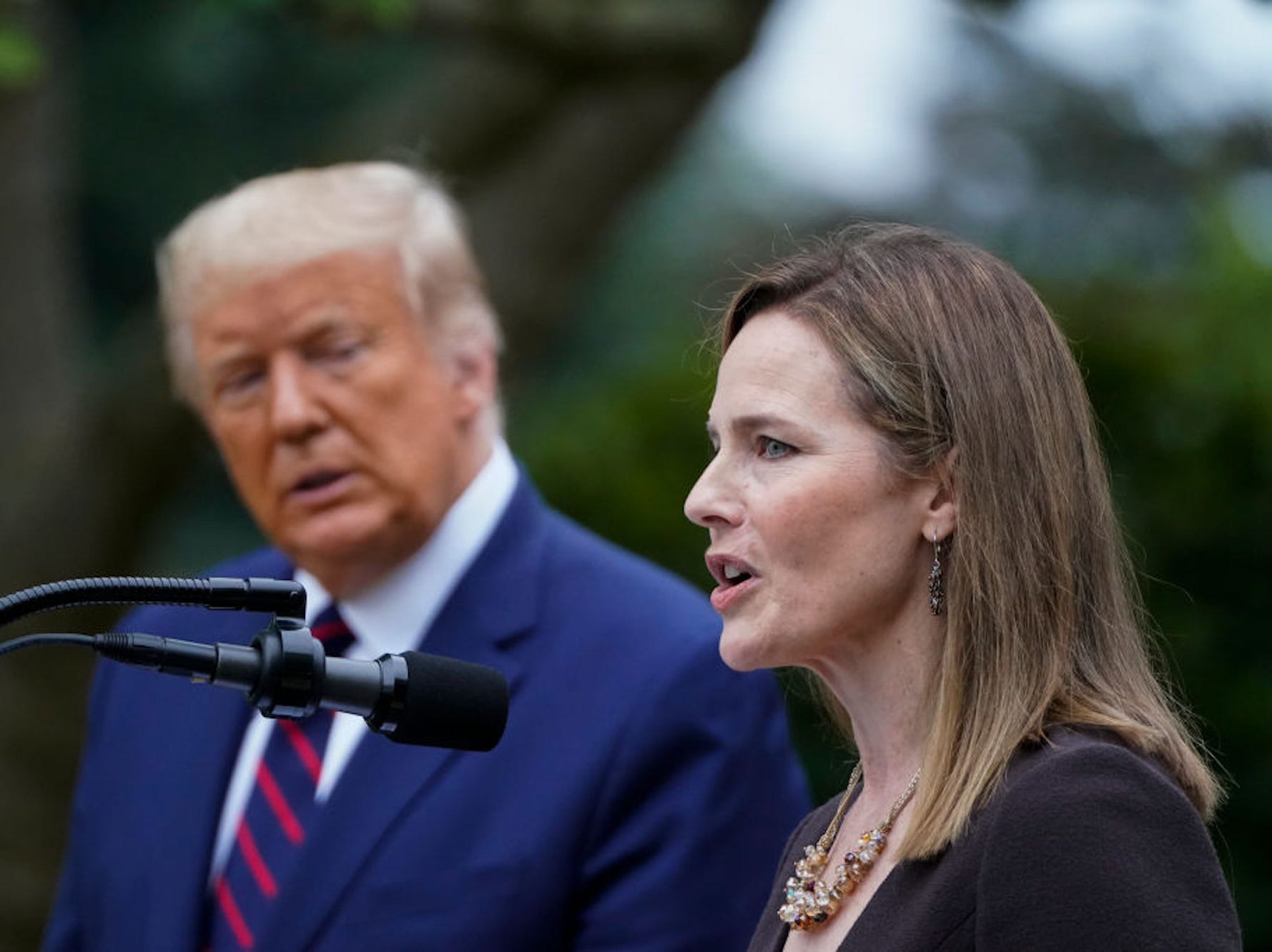 Jabin Botsford/The Washington Post via Getty ImagesJudge Amy Coney Barrett speaks as President Trump announces her nomination of as his choice for associate justice of the Supreme Court in the Rose Garden of the White House on Saturday, Sept. 26, 2020.

On September 18, liberal Justice Ruth Bader Ginsburg died of cancer complications, leaving an empty seat on the bench less than two months before the 2020 election.

The move was an 180 from the party position four years earlier, when Senate Republicans united to block President Obama’s nomination of Judge Garland to the court because the election was nine months away.

This time around, voting has already begun to take place in some states, and Election Day is less than a month away

McConnell says this year is different because Republicans control both the White House and the Senate.

Some Democrats have floated the idea of adding more seats to the Supreme Court if Biden wins to rebalance the scales.

However, regardless of the outcome, it seems that contentious Supreme Court battles are here to stay.