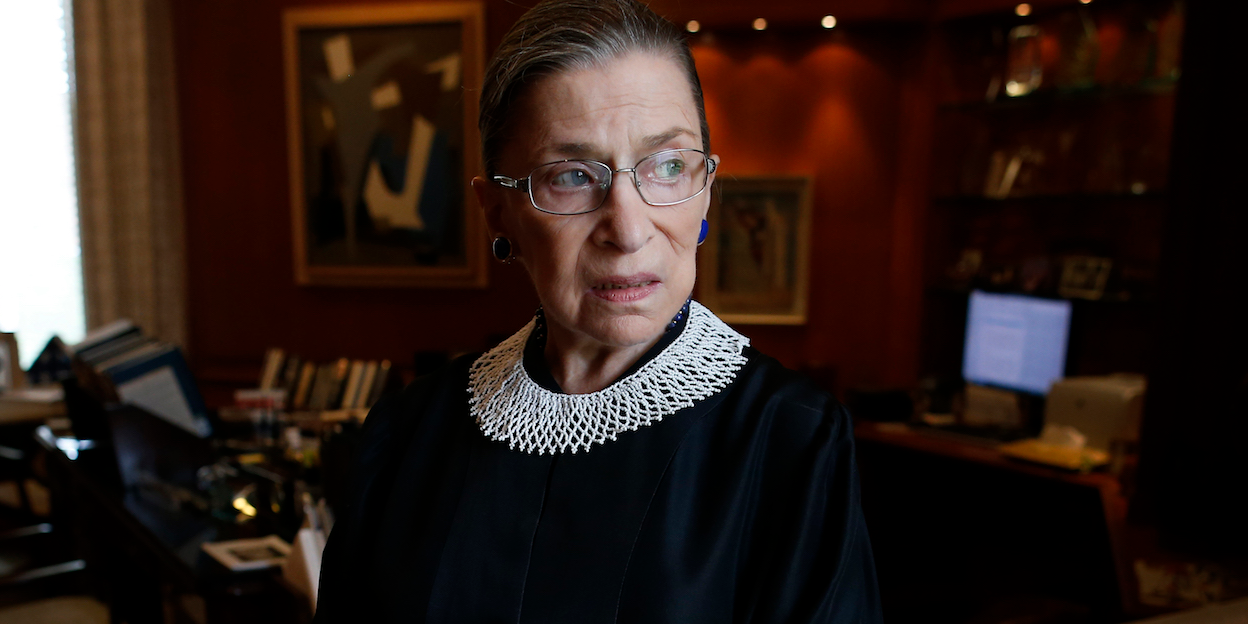 Supreme Court Justice Ruth Bader Ginsburg has died at the age of 87.

She died Friday evening at her home in Washington, DC. Her death was due to complications from metastatic pancreatic cancer, according to an announcement from the Supreme Court.

“Our Nation has lost a jurist of historic stature. We at the Supreme Court have lost a cherished colleague,” Chief Justice John Roberts said in the statement. “Today we mourn, but with confidence that future generations will remember Ruth Bader Ginsburg as we knew her â€” a tireless and resolute champion of justice.”

Ginsburg’s death gives President Donald Trump a third opportunity to nominate a lifetime appointee to the nation’s highest court, which would secure a conservative majority for decades to come.

Only the second woman to serve on the Supreme Court, Ginsburg had the rare opportunity to see herself become a feminist icon in her own time. Books and movies were made about her life. Dolls and action figures were created in her likeness, down to the trademark collars she wore over her black robes.

She was one of the most prominent Supreme Court justices in history, rising to a level of fame and historic achievement that seemed unlikely for a girl born in Brooklyn, New York, in 1933. It was a time that, as she told Duke Law students in 2005, “the most important degree” for girls to get “was not your B.A. but your M.R.S.” Collection of the Supreme Court of the United StatesThe justice as a toddler and as a young woman.

But Ginsburg’s parents, Jewish Ã©migrÃ©s from Europe, instilled the importance of getting a good education in their daughter. Her seriousness in school took her to the Ivy League. At Cornell, she met her future husband, Martin Ginsburg, whom she married just one month after graduating in 1954.

When her husband was accepted to study law at Harvard in 1955, Ginsburg applied too, becoming one of just nine women in the law school at the time, which had a student population of about 500.

Like most ambitious women of her age, Ginsburg faced challenges getting an advanced degree and entering the workforce in a patriarchal society where most women were expected to stay home and raise children. 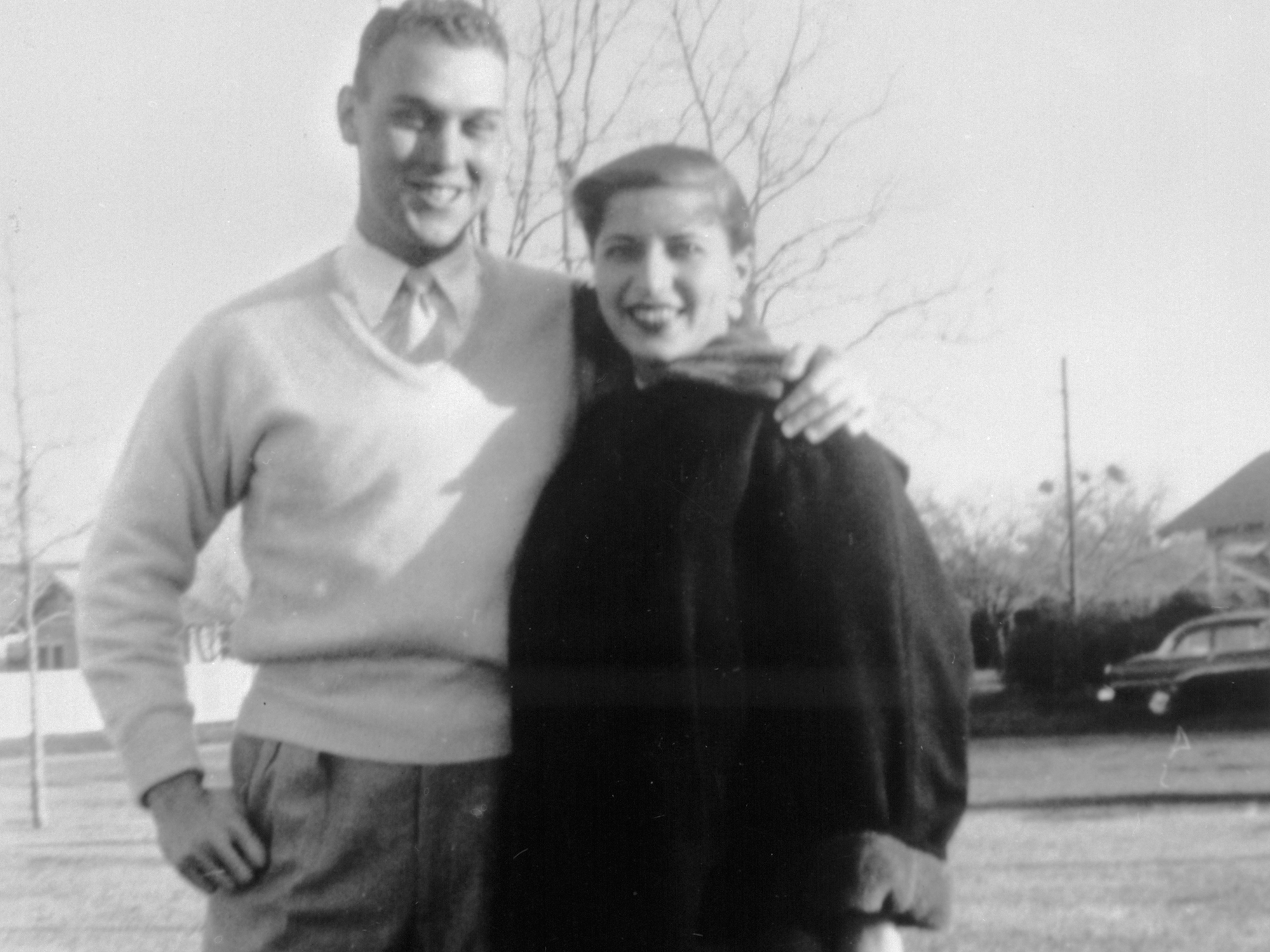 Collection of the Supreme Court of the United StatesMartin and Ruth Bader Ginsburg shortly after their marriage, which came just a month after Ruth graduated from Cornell in 1954.

An anecdote she often retold throughout her career was about a dinner she had in law school where the dean invited all of the female students. At the end of the meal, Ginsburg said the dean had them go around the table and explain why they deserved to take a place at the school that normally would have gone to a man.

Even though she graduated top of her class (at Columbia, where she transferred after her husband got a job in New York City), Ginsburg found it impossible to get a job at a law firm or a Supreme Court clerkship because she was a woman. It was only after one of her professors threatened to stop sending clerk candidates to Judge Edmund L. Palmieri â€” a judge in the US District Court for the Southern District of New York â€” that she finally found a position. But after that job was over, she faced troubles again and decided to give up a career practicing law to teach it instead â€” at Rutgers University.

When her second child, James, entered preschool, Ginsburg began volunteering at the American Civil Liberties Union. That began the rise of her career, which helped propel the women’s liberation movement. 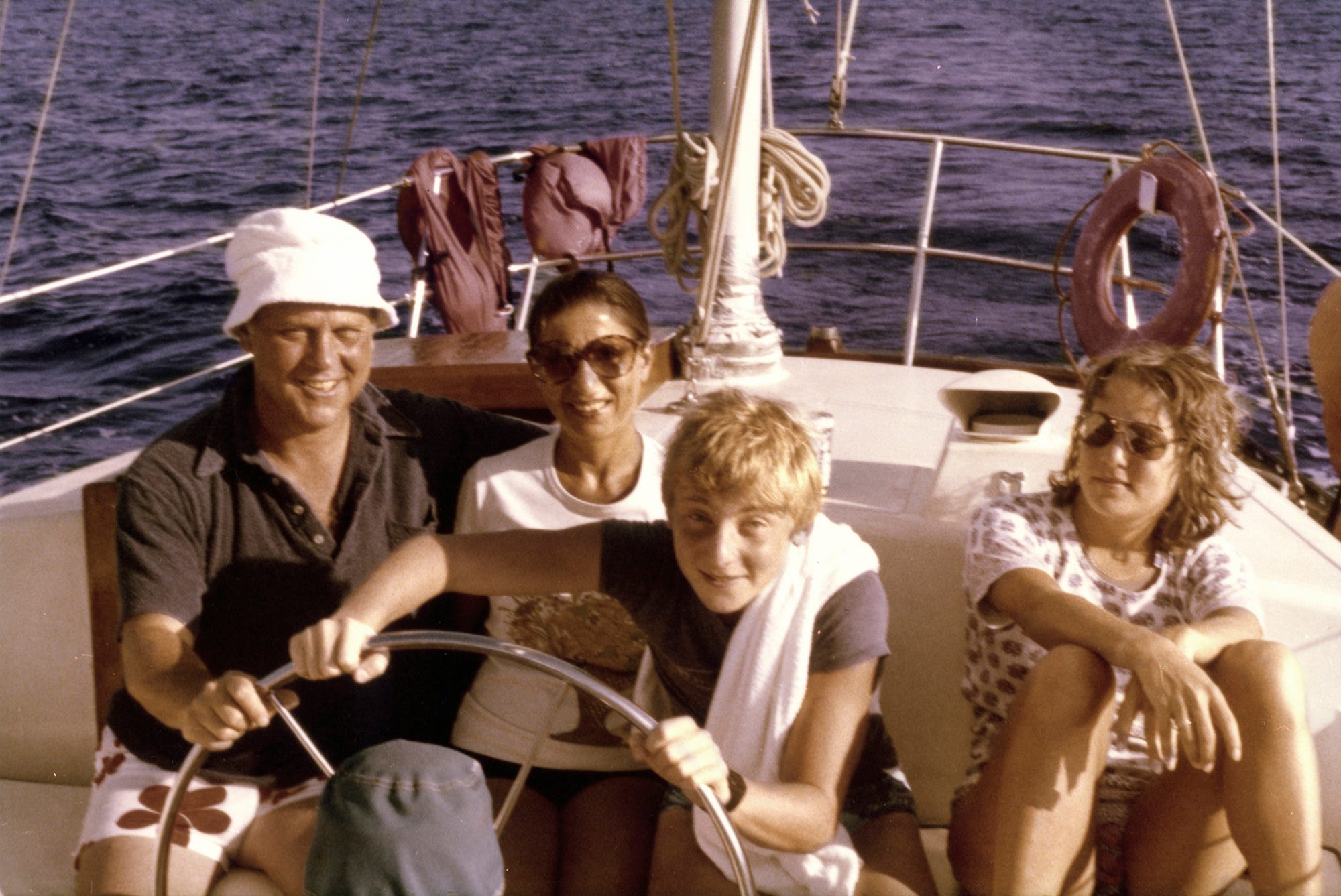 Collection of the Supreme Court of the United StatesThe Ginsburgs are pictured on a boating trip with their kids James and Jane.

Ginsburg’s career has been most closely compared to that of Thurgood Marshall, a champion for civil rights who also served on the Supreme Court. Where Marshall fought for racial equality, Ginsburg set her sights on gender equality.

Before serving on the Supreme Court, Ginsburg argued many cases in front of it. She was known to cleverly deploy a strategy for convincing the then all-male court of the existence of gender inequality. Instead of taking on cases involving women, she took on cases where men had been the victim of gender inequality. For example, in Weinberger v. Wiesenfeld, Stephen Wiesenfeld, a widower, sued after he couldn’t collect Social Security benefits when his wife â€” who had been the breadwinner â€” died in childbirth. At the time, such benefits were given to a widow if her husband died, but not the other way around. The Supreme Court unanimously sided with Wiesenfeld.

Her career took another turn in 1980, when she was nominated for a federal judgeship by then-President Jimmy Carter, serving on the US Court of Appeals for the District of Columbia Circuit, one of the most prestigious courts in the country. Thirteen years later, she was promoted to the Supreme Court by President Bill Clinton, with the Senate confirming her to the position in a nearly unanimous floor vote. 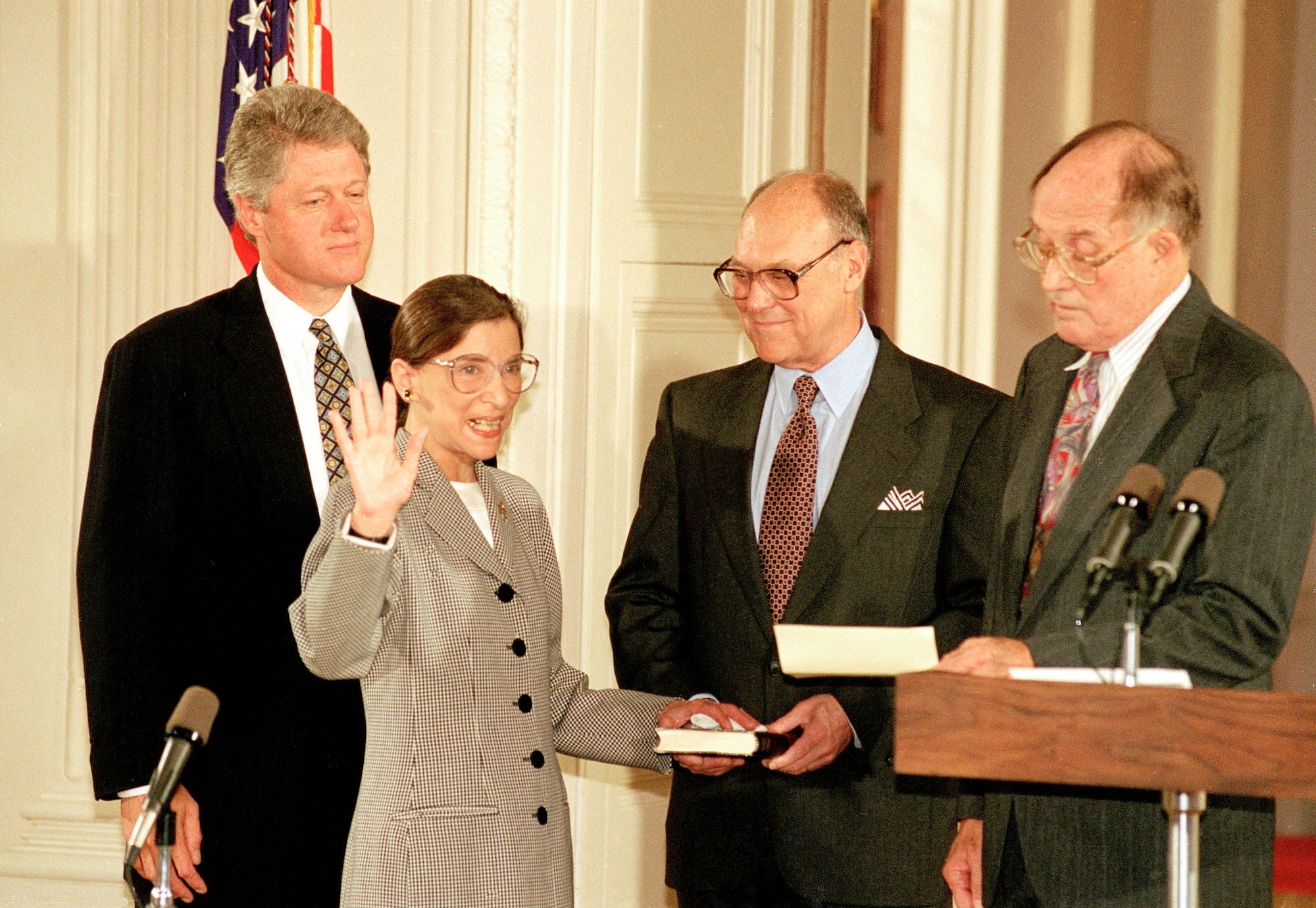 Marcy Nighswander/APGinsburg was sworn in as an associate justice of the Supreme Court in August 1993. To her left is her husband, Martin, and behind her is President Bill Clinton, who nominated her.

In was on the DC appeals court that she met one of her closest friends â€” future fellow Supreme Court Justice Antonin Scalia. Scalia was her polar opposite ideologically, but the two bridged their differences to create one of the deepest and oddest Supreme Court friendships, frequently going to the opera together and on vacations with their spouses.

When Scalia died in 2016, Ginsburg gave a eulogy at his funeral and recalled how Scalia had a hand in helping her get on the court in the first place.

“When President Clinton was mulling over his first nomination to the Supreme Court, Justice Scalia was asked: ‘If you were stranded on a desert island with your new Court colleague, who would you prefer, Larry Tribe or Mario Cuomo?’ Scalia answered quickly and distinctly: ‘Ruth Bader Ginsburg.’ And within days, the president chose me,” Ginsburg said. 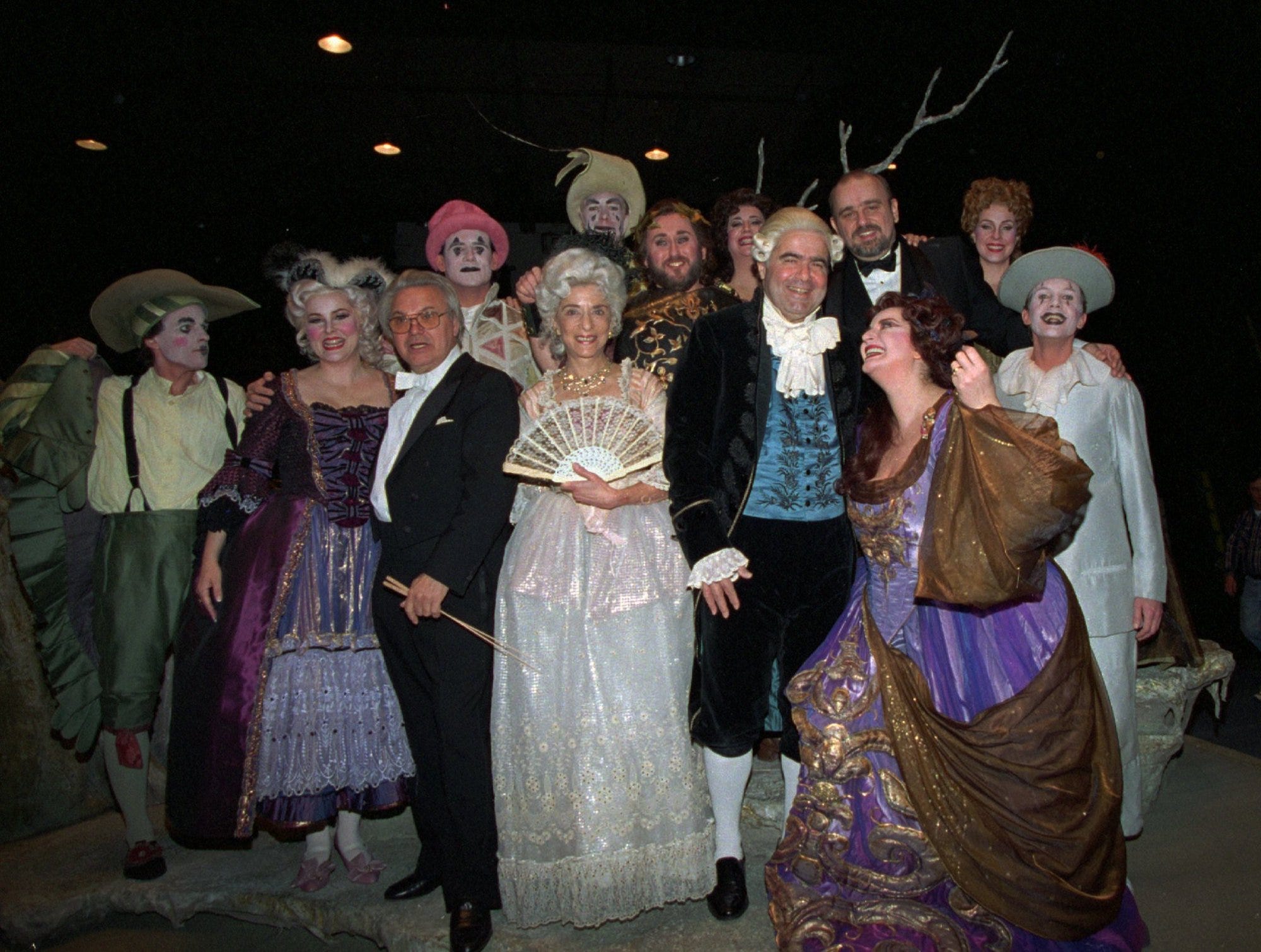 Stephen R. Brown/APGinsburg shared a close personal relationship with Justice Antonin Scalia. They are pictured front and centre (Ginsburg with a fan and Scalia in a blue waist coat) after they were invited to perform in an opera in 1994.

While she was one of the more moderate justices when she first started on the Supreme Court, over the past two and a half decades Republican presidents have had more opportunities to fill vacancies, turning the court decidedly more conservative. As such, Ginsburg became one of the most liberal judges on the court and a frequent dissenter.

One of her most fiery dissents came in 2013 when the Supreme Court voted 5-4 to strike down a provision of the 1965 Voting Rights Act, which insured that states had to get approval from the Justice Department before changing voting laws in their states. Ginsburg said “the sad irony of today’s decision lies in its utter failure to grasp why the VRA has proven effective,” and she added that “history repeats itself.”


Read more:
Trump is reportedly ‘saving’ a seat on the Supreme Court for conservative Amy Barrett in place of Ruth Bader Ginsburg

It was this dissent that earned her the nickname “The Notorious R.B.G” (a reference to the late rapper The Notorious B.I.G.) from a Tumblr fan account in 2013, a nickname that she heartily accepted.

“It seems altogether natural because we have one very important thing in common, the Notorious B.I.G. and me, we were both born and bred in Brooklyn, New York,” she said during a talk with Charlie Rose in 2017. 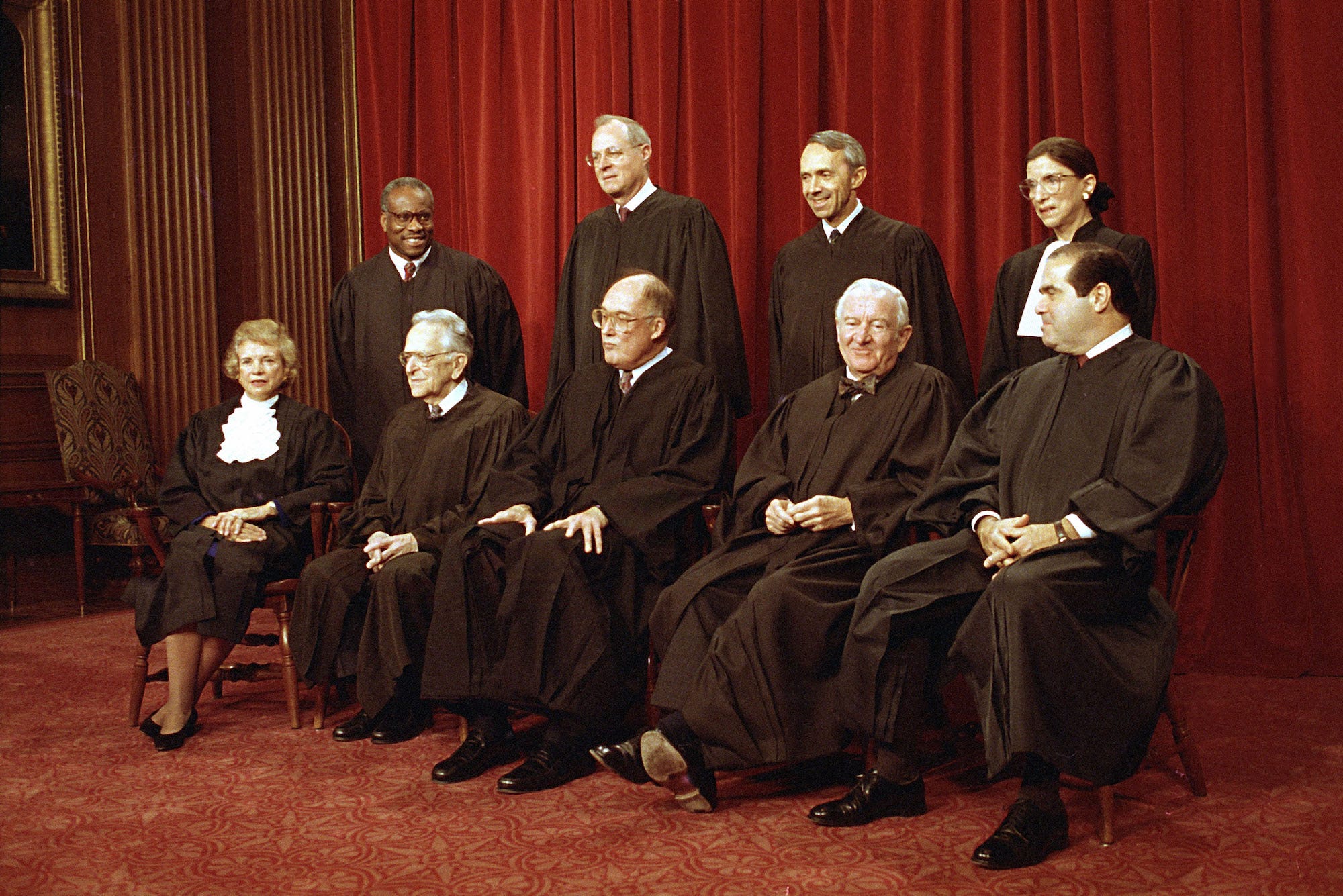 Marcy Nighswander/APGinsburg in the back row, far right, in her first group photo as a member of the Supreme Court.

While Ginsburg’s frequent dissents indicated she hadn’t had much influence on setting precedent, experts say her opinions helped activists frame their messages to push forward reproductive and civil rights, among other issues.

Linda Hirshman, the author of “Sisters in Law” â€” a book about both Ginsburg and Sandra Day O’Connor â€” was quoted in Mental Floss as saying Ginsburg’s dissents plant the “seeds” of change.

The death of Ginsburg’s husband in 2010, coupled with her own health issues, led to many calls for the ageing justice to retire so that President Barack Obama could appoint a similarly left-leaning justice. But Ginsburg refused, telling The Associated Press in August of that year that the work was helping her cope with the loss. 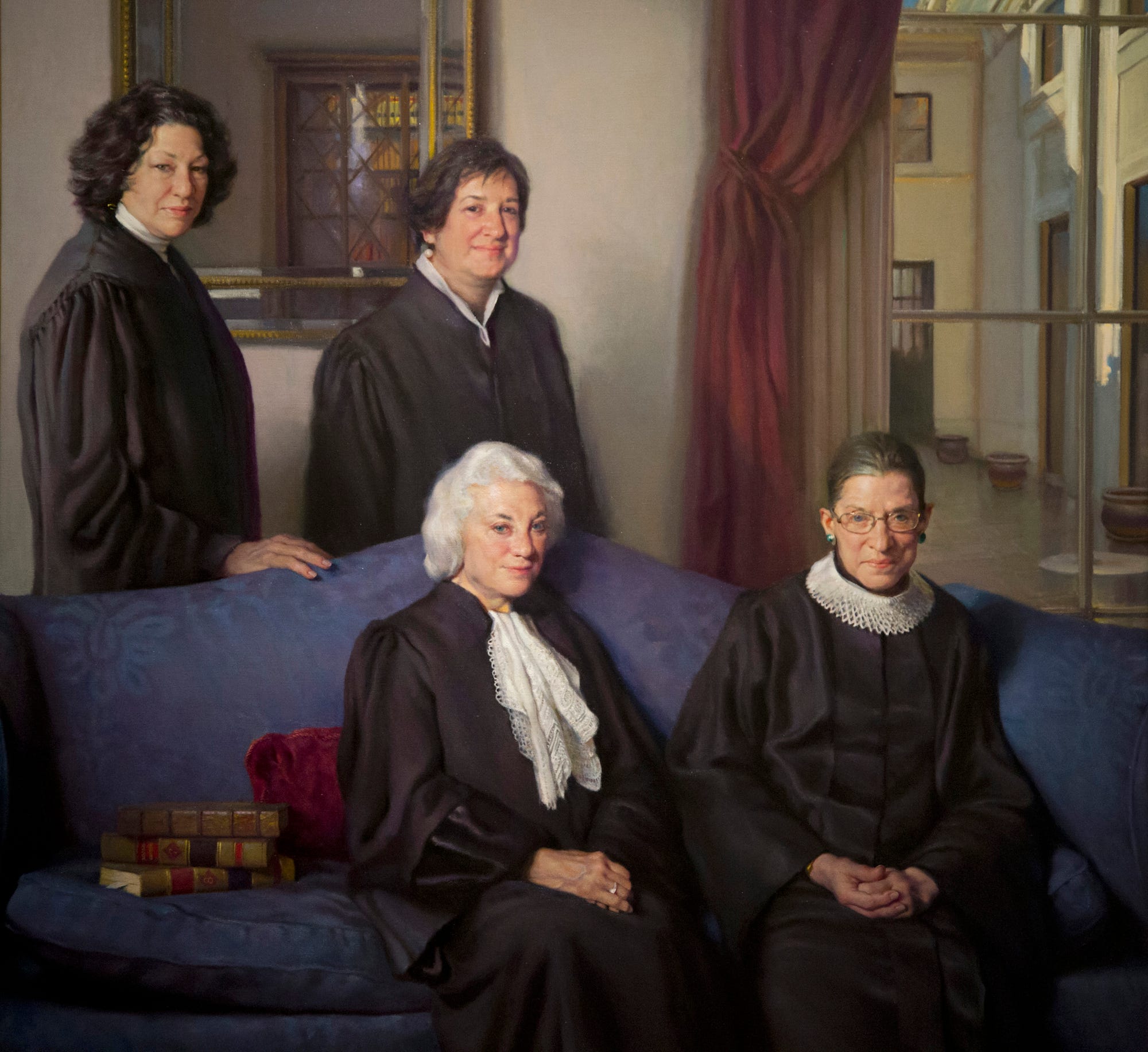 Ginsburg told CNN in July 2018 that she had “at least five more years” left in her before retiring. With much public scrutiny on her physical fitness, Ginsburg in March 2018 invited Stephen Colbert of “The Late Show” to one of her twice-weekly workouts with her personal trainer.

But Ginsburg’s death opens yet another seat on the nation’s highest court for Trump to fill, making him the most influential Supreme Court president since President Ronald Reagan appointed four justices during his two administrations. The court has turned solidly conservative since Trump assumed office in 2017, with the appointments of Justices Neil Gorsuch and Brett Kavanaugh.

Though the left may despair at Ginsburg’s death leading to an even more solidly conservative court, Ginsburg herself was optimistic about the tides of change.

Speaking about the cases in which she’s dissented, Ginsburg told ABC’s Lynn Sherr in a 2000 interview she got “dejected” by such losses “but only momentarily.”

“You go on to the next challenge and you give it your all. You know that these important issues are not going to go away. They are going to come back again and again. There’ll be another time, another day,” she said.

Ginsburg is survived by her two children and four grandchildren.