I spent over an hour playing the insane and delightful 'Super Mario Odyssey,' Nintendo's huge next game

Here’s hoping Nintendo is working double-time on making more of its new Nintendo Switch consoles available for this holiday. When “Super Mario Odyssey” arrives on October 27, and word starts getting around that it’s the freshest, craziest, most ambitious new Mario game in years, people are going to want the Switch. It’s going to be a thing once again.

Like “The Legend of Zelda: Breath of the Wild” before it, “Super Mario Odyssey” will sell Nintendo Switch consoles. It’s easy to understand why. More than just adorable, which it obviously is, “Super Mario Odyssey” is a breath of fresh air for the Mario franchise.

It takes classic 3D Mario gameplay and puts a bunch of new spins on the old formula. The new game is a spiritual successor to classics like “Super Mario 64” and “Super Mario Sunshine,” with huge, open worlds to explore — like New Donk City, in the “Metro Kingdom,” seen above.

What makes “Odyssey” unique is that in enables you to play as nearly anything  — including enemies  — by throwing your hat at them. This is how Mario becomes, say, Bullet Bill: Though it’s a novel trick, “Super Mario Odyssey” is much more than a one-trick pony. I spent over an hour exploring three huge areas in the next major Mario game at a recent event, and I have a bounty of information to share.

SPOILER WARNING: I'm going to speak about specific 'Super Mario Odyssey' gameplay from the final version of the game. If you want nothing spoiled, turn back! Then again, this is a 'Super Mario' game, so the real delight comes from playing the game -- it's hard to spoil the sheer joy of nailing a long jump. You'll probably be fine.

Perhaps the most important thing you should know: 'Super Mario Odyssey' feels like a Mario game. Running, leaping, backflipping and wall-jumping as Mario is as 'tight' as ever. In the brief time I spent with 'Super Mario Odyssey' last week, I was pulling off long jumps and backflips in no time flat. As ever, playing a new 'Super Mario' game is the video game equivalent of riding a new bike. It might feel new, but the fundamentals are still rock solid.

'Super Mario Odyssey' is essentially the sum of all previous Mario games, like so many Mario games before it.

What's so immediately impressive about 'Odyssey' is how that level of control translates to the many things Mario can become. 'Super Mario Odyssey' is essentially a Mario game with dozens of playable characters. Nintendo
After taking over one Goomba with your hat, you can jump on subsequent Goombas to stack. Yes, it is ridiculous. Yes.

Whether I was controlling a stack of Goombas in an attempt to woo a female Goomba (seriously) or swimming through the water as an adorable fish with a mustache (seriously), playing as the game's many 'capturable' things is truly fresh and exciting.

Just as you might imagine, there are boss fights built around using characters that aren't Mario -- that can only be defeated using characters that aren't Mario. The same thing applies to puzzles. I found myself wondering how to solve this or that, applying the usual set of tools that Mario comes with. The solution, nearly every time, was 'throw your cap.'

I'm oversimplifying of course, but here's an example:

In the beach area -- 'Bubblaine,' in the Seaside Kingdom -- one puzzle involved Mario being underwater for a significant amount of time. But Mario has limited air underwater. What to do? BECOME A FISH. You know what's hella fun? Swimming around with Mario as one of the same fish that appeared in the very first 'Super Mario Bros.' game on the NES.

The controls are somewhat limited -- these characters don't have anywhere near the same numbers of moves that Mario does -- but they also offer a surprising level of depth. As the fish, for instance, you can swim up or down, as well as speed forward for an attack of sorts. And yes, you can jump out of the water.

At first, the Bubblaine world seems so limited. There's a beach, and some mountainous crags nearby, but there's more water than anything else. Turns out that there's a ridiculously deep, impressive world just waiting to be explored underwater -- as a fish, of course.

It's like you're Kevin Costner in 'Waterworld' -- the only one who realises that the ruins of an ancient civilisation are buried underneath all that water. There's even this crazy sphinx!

I went elsewhere. He seemed pretty serious about it.

In many ways, 'Super Mario Odyssey' feels like a grown-up 'Super Mario 64.' You're solving puzzles and defeating enemies to collect moons in massive open worlds -- an extension of the way that 'Super Mario 64' worked with stars. Nintendo
This is Mario's ship, which is named the 'Odyssey' (surprise!). It's powered by moons that you collect in each area, thus enabling travel to new areas.

In traditional Mario games, you don't have 'hearts' -- you have power-ups. You start as small Mario, then you eat a mushroom and become big Mario. If you get hit by an enemy, you shrink. If you manage to get a power-up like a Fire Flower or a Feather, you can get hit twice before becoming small Mario once again.

In this way, 'Super Mario Bros.' has a 'health' system.

In 'Super Mario Odyssey,' you collect hearts. If you run out of hearts, you 'die' and have to return to one of the many checkpoint flags placed around each world. Each time you die, the game steals some of your coins (which you use in-game to buy outfits -- more on that in a moment).

It's a subtle tweak, but one with major implications: 'Super Mario Odyssey' is a game about exploration, discovery, and choice, whereas many traditional Mario games are about challenge and mastery. I've probably played level 1-1 in the original 'Super Mario Bros.' so many times that I could beat it with my eyes closed (mastery!). Though you could achieve that level of proficiency with something like 'Super Mario Odyssey,' the game is far more interesting for the agency it gives players (go wherever you want! play as whatever character you like!).

If anything, my brief time with 'Odyssey' made me feel like I was missing far more than I was seeing. When I played 'The Legend of Zelda: Breath of the Wild' before it came out, I felt the same way that I do now -- it was clearly huge, but a brief demo is only capable of demonstrating so much. I played about 40 minutes of 'Super Mario Odyssey' back in June, and over an hour last week; I feel like I've barely touched the game, and that's probably because I've barely touched the game. While playing, I saw a ton of stuff that I had no idea about.

In so many words: I don't think we've seen much of 'Odyssey' yet.

I was able to try three levels -- Bonneton, Bubblaine, and Mount Volbono -- and Nintendo has revealed nine thus far in total (large, distinct areas with dozens of moons to collect). More are in the game, but it's not clear how many there are in total. Nintendo is intentionally holding back that information. I don't think it's because the game is actually really small; I think it's because 'Super Mario Odyssey' is a potential new classic for Nintendo, and the company knows it.

With 'Breath of the Wild,' Nintendo set up a near-perfect Zelda playground. With 'Odyssey,' there's a similarity of approach that makes it feel truly modern. Nintendo
Here I am controlling Mario as a literal ball of fire. Of course!

Nintendo is notorious for not just making great games, but for setting precedents across the entire medium. With 'Breath of the Wild,' that was especially true -- all other open-world character action games look lesser after 'Breath of the Wild,' even the insanely good 'Horizon Zero Dawn' that came out alongside it.

In the case of 'Super Mario Odyssey,' no one else is really making games like it. Games like 'Crash Bandicoot' and 'Banjo and Kazooie,' which intended to compete with Mario games in the past, have largely fallen to the side.

Unbelievably, even in a game genre that Nintendo already more or less owns, 'Super Mario Odyssey' is doing things that feel brand new.

What seemingly isn't in 'Super Mario Odyssey'? Luigi and Yoshi. As far as I've seen, from a handful of Nintendo-released trailers and time I've spent playing the game, Mario's taller brother, Luigi, isn't in 'Super Mario Odyssey.' The same thing can be said for everyone's favourite green dinosaur, Yoshi.

Is it possible that they're in the game? Totally. Thus far, we've only seen Mario, Bowser, Peach, and the occasional Toad.

One more thing: Get ready to dress up Mario in a bunch of very silly outfits. Nintendo
Yes, Mario has nipples. Yes, it makes us all uncomfortable.

One major ingredient in 'Super Mario Odyssey' that isn't new is the goofy Nintendo magic that's imbued in so much of the game. This comes across most clearly in the 'Crazy Cap' clothing store, where you can outfit Mario with a mess of different outfits. As you see above, when given the chance, I immediately put Mario in a sombrero and a bathing suit. I'm a 32-year-old adult.

But more than just silly outfits, they often serve a purpose in game. I'll take a wild guess that this chef's uniform enables Mario to be taken seriously by these fork chefs:

More likely, these oufits will serve as a means of allowing Mario access to a situation that will result in a moon. This was certainly the case when I played the game back in June -- putting Mario in a sombrero and poncho allowed him access to a dance club where he performed, thus earning a moon.

Oh, and there's a photo mode that enables you to take some aggressively silly photos. The mode, called 'Snapshot Mode,' is fairly simple to use and enables you to take some great, ridiculous photos. The one above took me all of one minute to put together -- I call it 'The Tragedy of Mario.'

'Super Mario Odyssey' is almost here -- it arrives on October 27 on the Nintendo Switch. Here's the latest gameplay trailer: 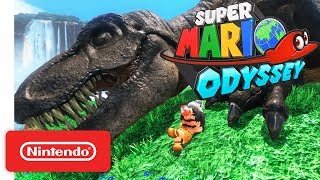