A golden chamber buried under a mountain in Japan contains water so pure it can dissolve metal, and it's helping scientists detect dying stars 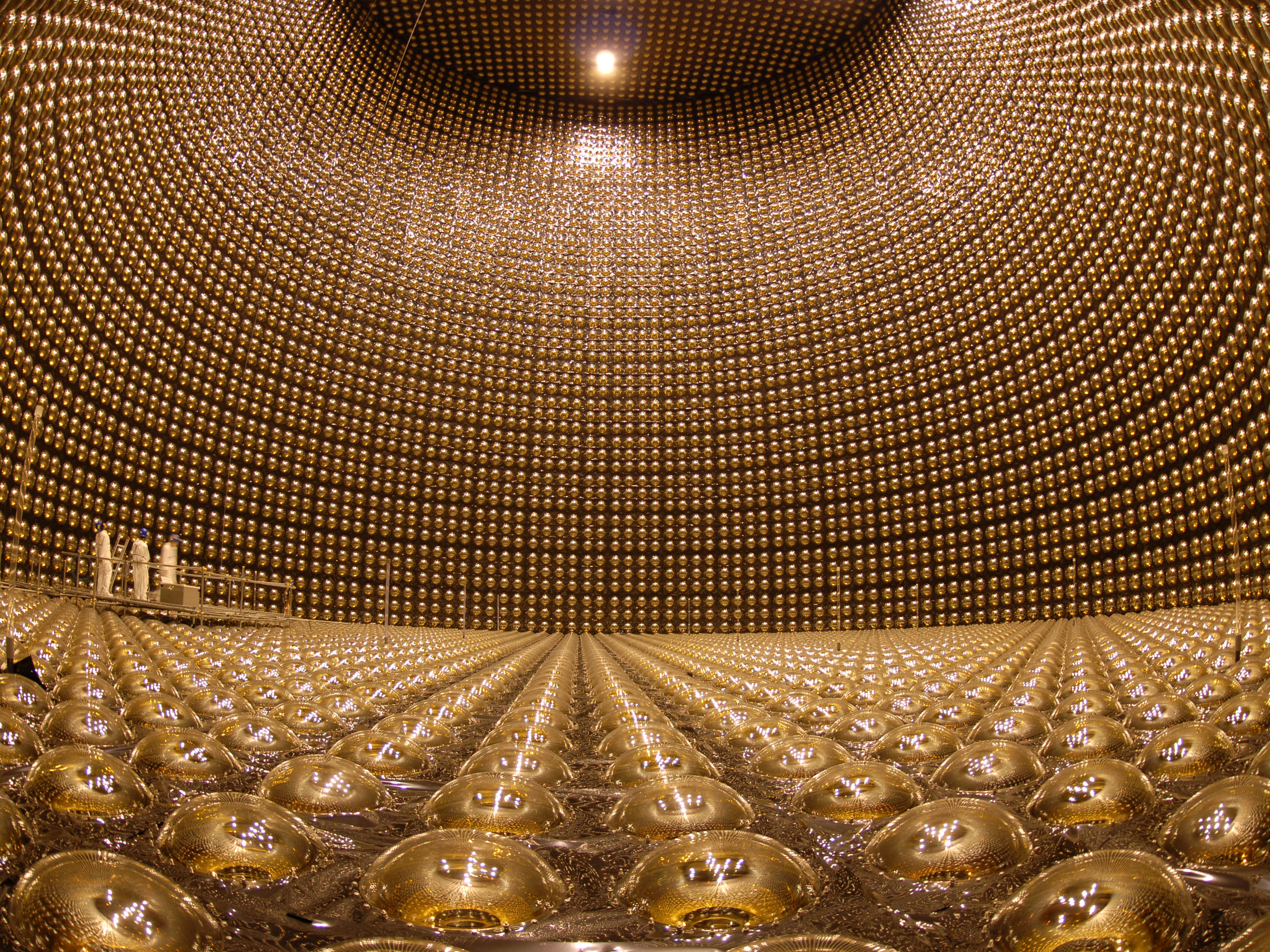 Hidden 1,000 metres under Mount Ikeno in Japan is a place that looks like a supervillain’s dream.

Super-Kamiokande (or “Super-K” as it’s sometimes referred to) is a neutrino detector. Neutrinos are sub-atomic particles which travel through space and pass through solid matter as though it were air.

Studying these particles is helping scientists detect dying stars and learn more about the universe. Business Insider spoke to three scientists about how the giant gold chamber works – and the dangers of conducting experiments inside it.

Neutrinos can be very hard to detect, so much so that Neil deGrasse Tyson dubbed them “the most elusive prey in the cosmos.”In this video, he explains that the detection chamber is buried deep within the earth to stop other particles from getting in.

“Matter poses no obstacle to a neutrino,” he says. “A neutrino could pass through a hundred light-years of steel without even slowing down.”

But why catch them at all?

“If there’s a supernova, a star that collapses into itself and turns into a black hole,” Dr Yoshi Uchida of Imperial College London told Business Insider. “If that happens in our galaxy, something like Super-K is one of the very few objects that can see the neutrinos from it.”

Before a star starts to collapse it shoots out neutrinos, so Super-K acts as a sort of early-warning system, telling us when to look out for these dazzling cosmic events.

caption
The Crab Nebula (pictured) is the result of a supernova explosion observed in 1054.

“The back-of-the-envelope calculations say it’s going to be about once every 30 years that a supernova explodes in the sort of range that our detectors can see,” said Dr Uchida. “If you miss one you’re going to have to wait another few decades on average to see the next one.”

Situated on the opposite side of Japan in Tokai, the T2K experiment fires a neutrino beam 295 km through the Earth to be picked up in Super-K on the west side of the country.

Studying the way the neutrinos change (or “oscillate”) as they pass through matter may tell us more about the origins of the universe.

In April 2020 Super-Kamiokande featured on the cover of Nature magazine following a breakthrough using the detector which brought researchers closer to understanding the relationship between matter and anti-matter.

caption
Looking up at the top of Super-Kamiokande.

“Our big bang models predict that matter and anti-matter should have been created in equal parts,” Dr Morgan Wascko of Imperial College told Business Insider, “but now [most of] the anti-matter has disappeared through one way or another.”

Researchers fired neutrinos and anti-neutrinos at Super-Kamiokande to study how they oscillated. According to Imperial, the researchers’ findings provide the “strongest evidence yet” that matter and antimatter behave differently, explaining why the two wouldn’t immediately annihilate each other at the beginning of the universe.

“This result brings us closer than ever before to answering the fundamental question of why the matter in our universe exists. If confirmed – at the moment we’re over 95 percent sure – it will have profound implications for physics and should point the way to a better understanding of how our universe evolved,” said Dr Patrick Dunne, a physicist at Imperial college.

Buried 1,000 metres underground, Super-Kamiokande is as big as a 15-story building.

The enormous tank is filled with 50,000 tonnes of ultra-pure water. This is because when travelling through water, neutrinos are faster than light. So when a neutrino travels through water, “it will produce light in the same way that Concord used to produce sonic booms,” said Dr Uchida.

The chamber is lined with 11,000 golden-coloured bulbs. These are incredibly sensitive light-detectors called Photo Multiplier Tubes (PMTs) which can pick up these shockwaves.

Here’s a closeup of a PMT:

Now, this is a photomultiplier tube. This is a display model of a PMT used in the SuperKamiokande neutrino observatory #pmt #photomultipliertube #superkamiokande #neutrino #physics #particlephysics #japan

Dr Wascko describes them as “the inverse of a lightbulb.” Simply put, they can detect even minuscule amounts of light and convert it into an electrical current, which can then be observed.

In order for the light from these shockwaves to reach the sensors, the water has to be cleaner than you can possibly imagine. Super-K is constantly filtering and re-purifying it, and even blasts it with UV light to kill off any bacteria.

Which actually makes it pretty creepy.

“Water that’s ultra-pure is waiting to dissolve stuff into it,” said Dr Uchida. “Pure water is very, very nasty stuff. It has the features of an acid and an alkaline.”

“If you went for a soak in this ultra-pure Super-K water you would get quite a bit of exfoliation,” said Dr Wascko. “Whether you want it or not.”

When Super-K needs maintenance, researchers need to go out on rubber dinghies to fix and replace the sensors.

caption
A dinghy is lowered into the detector.

caption
From the dinghies, scientists can inspect the PMTs.

caption
Gradually the water-level is lowered so the researchers can get to each domed PMT in turn.

caption
A cross-section photograph of the tank after it’s been totally drained for refurbishment gives some sense of scope.

Dr Matthew Malek, of the University of Sheffield, and two others were doing maintenance from a dinghy back when he was a PhD student.

At the end of the day’s work, the gondola that normally takes the physicists in and out of the tank was broken, so he and two others had to sit tight for a while. They kicked back in their boats, shooting the breeze.

“What I didn’t realise, as we were laying back in these boats and talking is that a little bit of my hair, probably no more than three centimeters, was dipped in the water,” Malek told Business Insider.

As they were draining the water out of Super-K at the time, Malek didn’t worry about contaminating it. But when he awoke at 3 a.m. the next morning, he had an awful realisation.

“I got up at 3 o’clock in the morning with the itchiest scalp I have ever had in my entire life,” he said. “Itchier than having chickenpox as a child. It was so itchy I just couldn’t sleep.”

caption
The water in Super-K has some disconcerting qualities.

He realised that the water had leeched his hair’s nutrients out through the tips, and that this nutrient deficiency had worked its way up to his scalp. He quickly jumped in the shower and spent half an hour vigorously conditioning his hair.

Another tale comes from Dr Wascko, who heard that in 2000 when the tank had been fully drained, researchers found the outline of a wrench at the bottom of it. “Apparently somebody had left a wrench there when they filled it in 1995,” he said. “When they drained it in 2000 the wrench had dissolved.”

Super-Kamiokande may be massive, but Dr Wascko told Business Insider that a yet bigger neutrino detector called “Hyper-Kamiokande” has been proposed.

“We’re trying to get this Hyper-Kamiokande experiment approved, and that would start running in approximately 2026,” he said.