YouTube/Warner Bros.A lot of ‘Suicide Squad’ will ride on the performance of Margot Robbie who plays Harley Quinn.

Fans went nuts over it.

The more than three-minute trailer showed off footage of the Squad — the team of DC Comics’ villains rounded up by the government to use in black ops missions.

It also previewed our first look at the new Joker, played by Jared Leto and the first onscreen adaptation of Harley Quinn (Margot Robbie), the Joker’s henchwoman/love interest in the comics.

The group is expendable. If they stray from their mission, they are killed and are easily replaced with another member of DC Comics’ large rogue’s gallery.

When the trailer leaked online after its Comic-Con debut, Warner Bros.’ released the footage Monday.

The film looks very promising as the first comic-book adaptation to directly focus around a group of villains.

Let’s take a closer look at the footage to see what the film will be all about.

We're introduced to Amanda Waller (Viola Davis), the character who will lead the charge bringing the Squad together, sitting with some government figures.

She tells them she's done it. She's found 'the worst of the worst.' Cue an image of a solitary confinement inside a prison facility.

The idea is to assemble a task force of the most dangerous people on the planet so they can 'do some good.' Why use bad guys to take on government black ops missions? Because 1. they're expendable and 2. If anything goes wrong, Waller can pin the blame on the violent criminals.

They're locked up far underground. We're supposed to get the idea that these guys are so dangerous they need to be buried deep below the surface.

Here we see our first shot of Margot Robbie as Harley Quinn. The Hall H crowd at Comic-Con went nuts when they saw her appear on screen.

Robbie was recently in 'Focus' with Will Smith and a scene stealer in 2013's 'The Wolf of Wall Street.'

This will be the first time the character, first introduced in 'Batman: The Animated Series' as the Joker's henchwoman, will appear on the big screen, so fan expectations are extremely high.

Robbie has a lot riding on her performance.

The trailer slowly introduces us to the entire 'Suicide Squad.' Here's Jay Hernandez who will be played by El Diablo.

He's an ex-criminal covered in tattoos.

Will Smith will presumably play the squad's leader, Deadshot.

Here he is in costume.

Killer Croc (Adewale Akinnuoye-Agbaje) is rolled out in a straight jacket.

Here's a better look at him.

Another shot of some of the crew.

We see a lot of people in random masks with guns. There's a guy wearing an eyeball mask and another disguised as a baby.

And this guy wearing a goat mask. (If you look to the floor on the left, it looks like things didn't turn out so great for eyeball dude.)

Let's not forget this panda ...

It looks like all of the masked characters work with the Joker (Jared Leto). Look off to the left in this shot where the Clown Prince of Crime is teased and the panda is very visible.

It also looks like we're going to get some flashbacks and backstories to how the 'Suicide Squad' came together. Here we see Will Smith's character Deadshot around what appears to be Christmastime with his little girl.

It also looks like we see Margot Robbie before she was the Joker's henchwoman, back when she was just psychiatrist Dr. Harleen Quinzel. (Note the glasses.) However, who's that guy? It sure looks like Leto; however, if you're familiar with the characters, you know Quinzel is the Joker's psychiatrist while he's in prison, where he wins her loyalty and her heart. But he definitely does not have his green hair here. Maybe 'Suicide Squad' is changing that up a little.

Note that others think this is Cara Delevingne's character with Kinnaman's Rick Flag, especially since Delevingne has this image on her Instagram account.

It looks like we may see how Quinzel became Harley. We see her violently tossed into some doctor setting. There are those masked punks again in the background.

Here we see her strapped down to a table with the Joker clearly hovering over her. Look at the purple gloves and the tattooed 'Ha Ha ha' laughs over his chest.

The Joker's character is first introduced to us walking down a hall.

We see that he's torturing someone. While many online have assumed it's a character teased in the new 'Batman v Superman' trailer, could it actually be Harleen before she becomes Harley? The rooms below sure look the same. We also see some glimpses of Batman in the film.

He's chasing down the Joker in a purple vehicle, presumably with Harley inside. We're not really sure how this may fit into the picture, yet.

There are so many visuals of Robbie as Harley. Her adapted character will really help make or break this film. 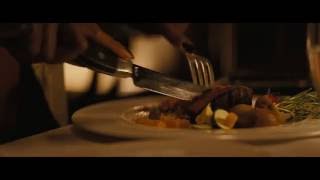