Jeff Bezos created Amazon from his garage – here are 14 of the most successful companies that started in basements, sheds, and bedrooms 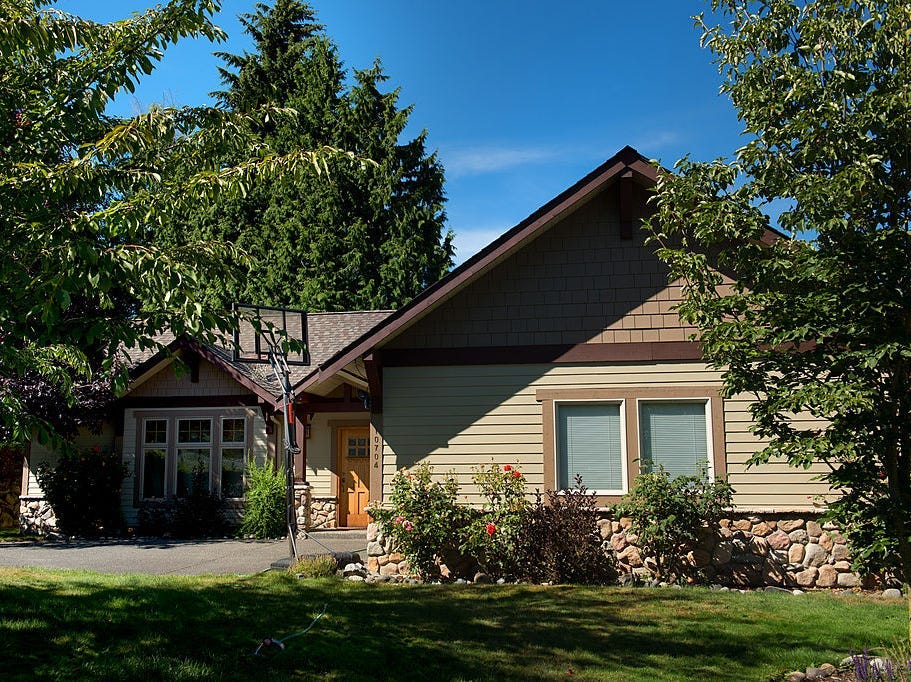 As a new or young entrepreneur with big ideas and perhaps little money to spend, a proper office space is often out of the question in the early stages of building a business.

Knowing that, it’s no surprise that childhood bedrooms, home garages, dark basements, and college dorm rooms are where some of today’s most successful companies were born.

Here’s where 14 big-name businesses got their start. 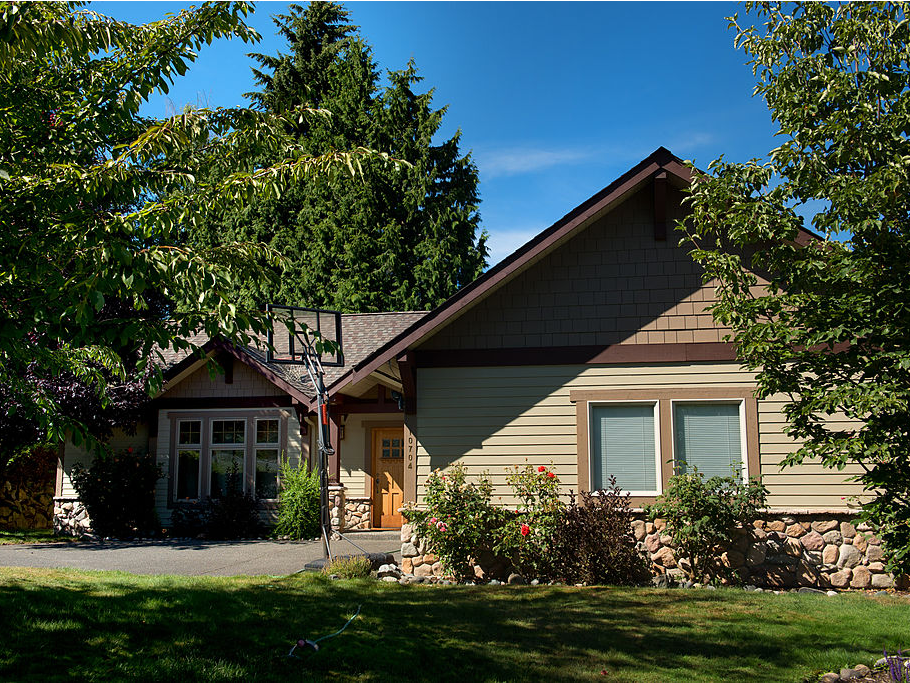 In 1994, Jeff Bezos decided to take advantage of the internet’s potential. He quit his New York hedge fund job and drove to Bellevue, Washington, where he rented a house.

Bezos spent a year programming the site – which initially sold books – out of his garage, and in July 1995, Amazon.com went live.

Today, Bezos is the richest person in the world, with a net worth of about $US193 billion. Amazon is valued at about $US1.7 trillion.

On February 2, Amazon announced Bezos will be stepping down as CEO later this year and transition to the role of executive chairman.

The idea of Facebook was born in Mark Zuckerberg’s freshman dorm room at Harvard. Mark Zuckerberg created a website called Facemash in 2003 while studying at Harvard. The site let students judge other people’s levels of attractiveness, but was quickly taken down after two days.

Keeping the momentum going, a year later, Zuckerberg and his friends – Eduardo Saverin, Dustin Moskovitz, and Chris Hughes – created The Facebook, a social networking site that quickly spread to colleges across the country.

In the years since, Facebook has come under attack over privacy concerns. While testifying in front of the Senate Judiciary Committee and Commerce Committee during the Cambridge Analytica scandal in 2018, Zuckerberg often cited his humble roots, explaining, “The history of how we got here is we started off in my dorm room with not a lot of resources.”

Today, Facebook is valued at about $US760 billion and has around 58,600 full-time employees.

Microsoft cofounders Bill Gates and Paul Allen founded the company in a garage in Albuquerque. In 1975, the pair started Micro-Soft, for microprocessors and software, to develop an operating software for the Altair 8800, an early personal computer.

Gates and Allen worked in a garage in Albuquerque, but later used the Sundowner Motor Hotel as a basecamp because it was conveniently located across the street from a personal computer company.

Today, Microsoft is valued at about $US1.8 trillion and employs around 166,400 people.

On a visit back to Albuquerque, Gates said, “There’s no better symbol for the entrepreneur than the humble garage. Of course … we founded our company in a garage to preserve the pile of money I got from my parents, but I assume other people do it because they’re poor.” Justin Sullivan/Getty ImagesSusan Wojcicki’s garage in Menlo Park, which she rented to Brin and Page for $US1,700 a month.

According to a Business Insider profile of Susan Wojcicki, in 1998, Wojcicki and her husband, Dennis Troper, bought a four-bedroom home in Menlo Park, California, and rented the garage out to two Stanford doctoral students to help pay their mortgage.

The students happened to be Larry Page and Sergey Brin, who were working on their new company, Google.

Wojcicki eventually became the 16th employee at Google, which later moved to an office space in 1999.

In 2019, Page and Brin stepped down from the company, writing, “We could not have imagined, back in 1998 when we moved our servers from a dorm room to a garage, the journey that would follow.”

Steve Jobs’ parents’ garage played a part in the early days of Apple. Back in 1976, Steve Jobs’ parents’ garage in Silicon Valley played a role in the early stages of Apple. However, Jobs and his co-founder, Steve Wozniak, quickly outgrew the space, Wozniak told Bloomberg Businessweek.

According to a Washington Post article, Wozniak has dubbed the idea that Apple was “founded” in a garage “a bit of a myth,” but he also admitted that the garage is part of the company’s story.

In 2014, he told Businessweek, “The garage represents us better than anything else, but we did no designs there. We would drive the finished products to the garage, make them work and then we’d drive them down to the store that paid us cash.”

The garage – which is attached to Jobs’ childhood home in Los Altos, California – has since been designated as a historic site.

Today, Apple is worth about $US2.2 trillion with retail stores in 25 countries. As of 2020, the company employed about 147,000 people around the world.

In 1923, Walt Disney was drawing cartoons in his uncle’s backyard garage. 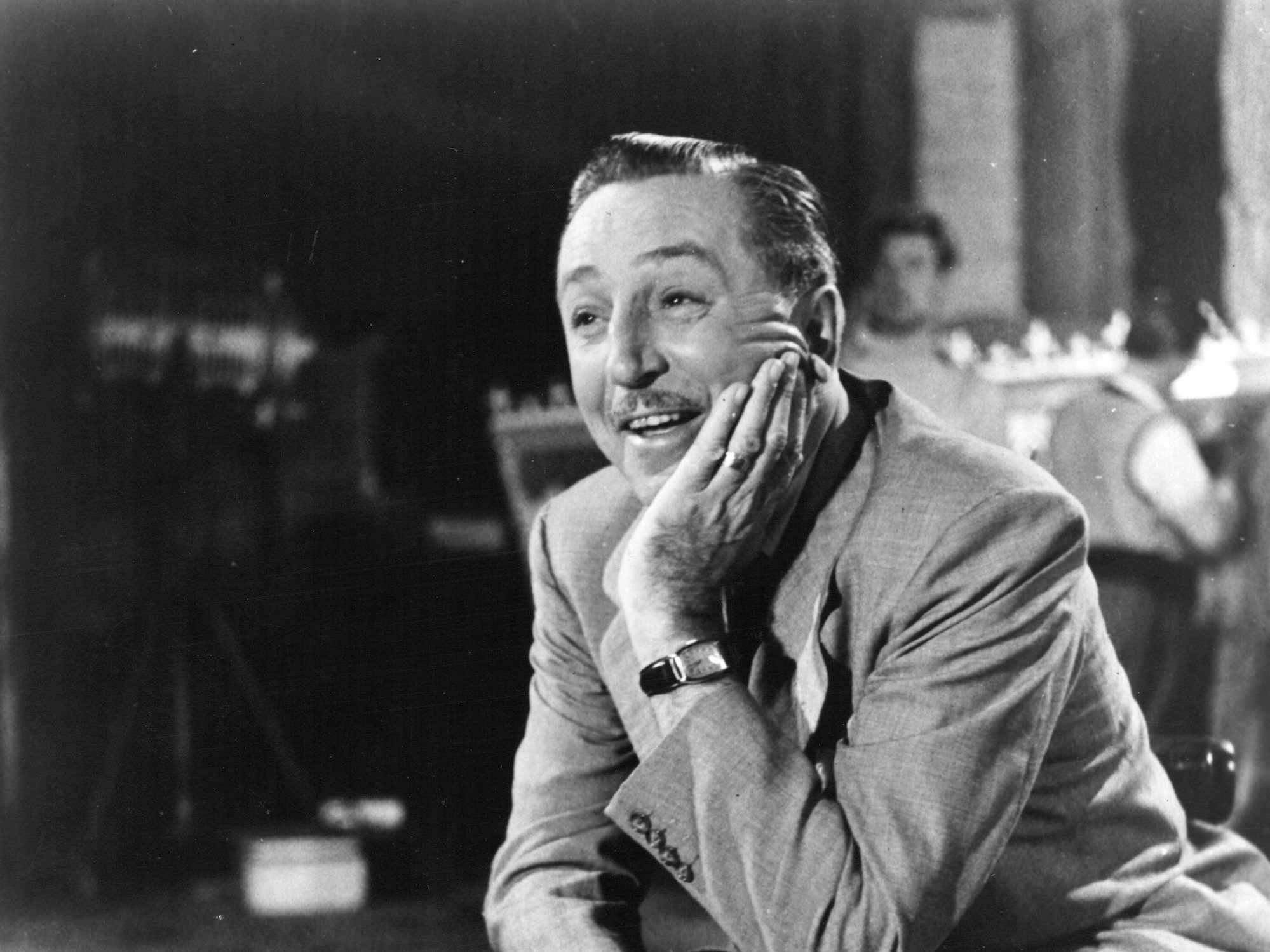 In 1922, Walt Disney created “Alice in Cartoonland,” which were seven-minute bits combining animation and live-action. But Disney was cheated by a New York film distributor and eventually had to move to Hollywood to find other work in the movie industry.

In Hollywood, Disney lived with his uncle and set up shop in his garage drawing cartoons. According to Encyclopaedia Britannica, after hearing that his “Alice” cartoon was still popular, Disney and his brother Roy purchased a $US200 used camera and set up Disney Brothers Cartoon Studio, where they created the entire “Alice Comedies” series.

In Under Armour’s early days, Kevin Plank was selling his products out of his grandmother’s basement. AP/Nick WassPlank in 2004 posing with University of Maryland football players, where he was once the special teams captain.

According to a Business Insider profile of Under Armour, In 1996, Kevin Plank founded the company with the goal of creating athletic wear that was able to wick away sweat and be worn as a base layer for intense activity.

At the time, Plank was living in his grandmother’s townhouse in Georgetown, where he used the basement as his office.

Today, Under Armour is valued at about $US8.2 billion.

In an interview with The Washington Post, Plank said, “I remember the guys from the NFL called me up one day and they said, ‘Kevin, we’re going to be in D.C. today, we want to come by the office and see you,’ which had me looking around Grandma’s house thinking ‘Oh my gosh, don’t do that.'”

Sara Blakely created Spanx in her apartment in Georgia while working 9 to 5 selling fax machines. 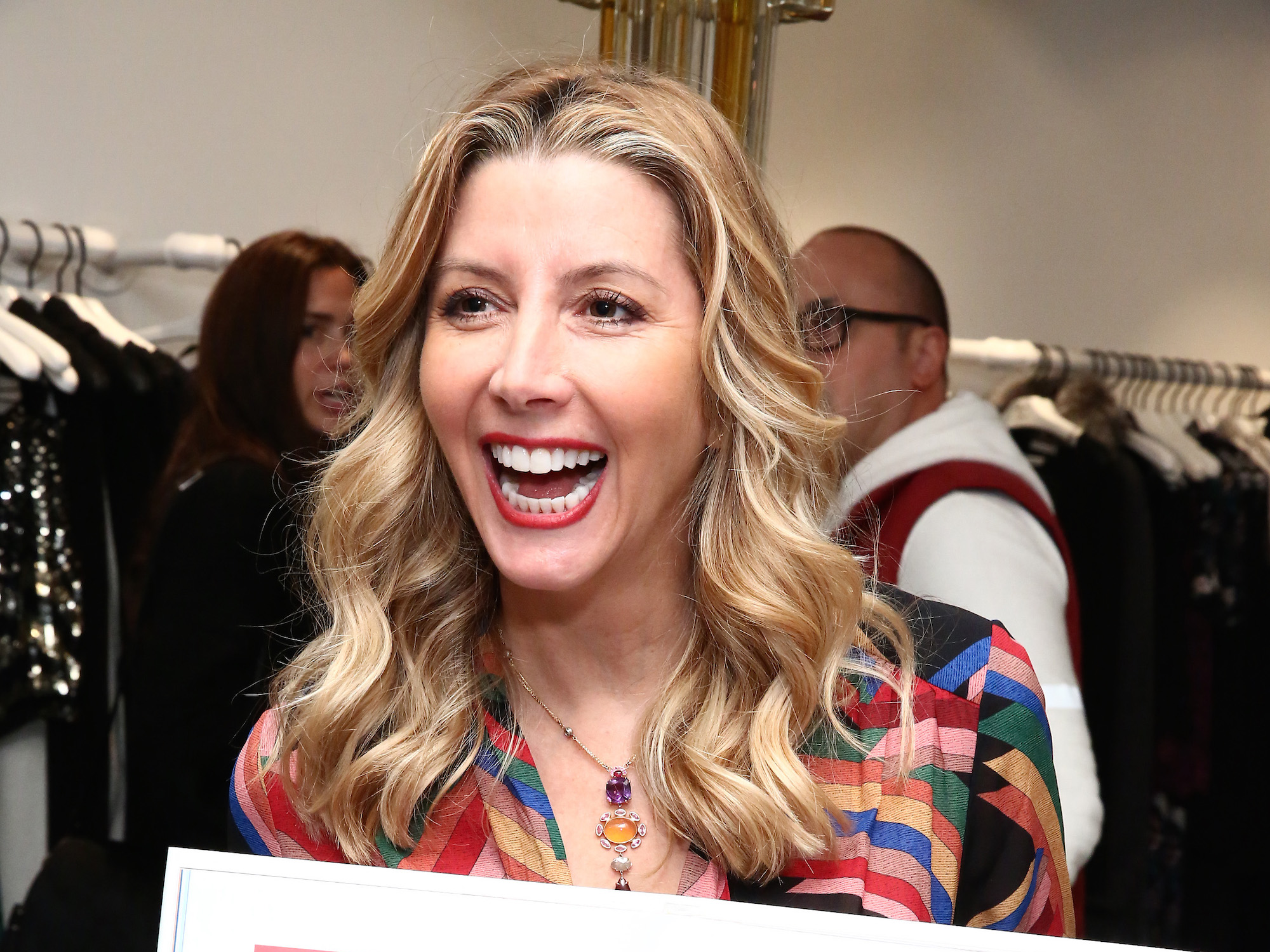 Astrid Stawiarz/Getty Images for The Belly Art ProjectSarah Blakely, the founder of Spanx.

Sara Blakely was working as a door-to-door fax machine salesperson when she came up with the idea for Spanx. While wearing open-toe shoes, she decided to cut the feet off a pair of pantyhose and realised she was on to something.

As explained in a story by Forbes, Blakely spent two years carefully researching and preparing for the launch of Spanx while also working a full-time job. She then went to a pitch meeting and convinced Neiman Marcus to give her product a chance. Using Neiman Marcus as leverage, Blakely was then able to also convince Bloomingdale’s, Saks, and Bergdorf Goodman to give Spanx a shot.

But even then, she had no corporate space. She’d package and ship the Spanx orders from home with the help of her boyfriend, and took phone calls from her bathtub or bed, according to the Forbes article.

Laurie Ann Goldman came to help Blakely, becoming the fifth employee and eventual CEO. In an interview with Forbes, she recalled her first office being the kitchen in Blakely’s Georgia apartment. 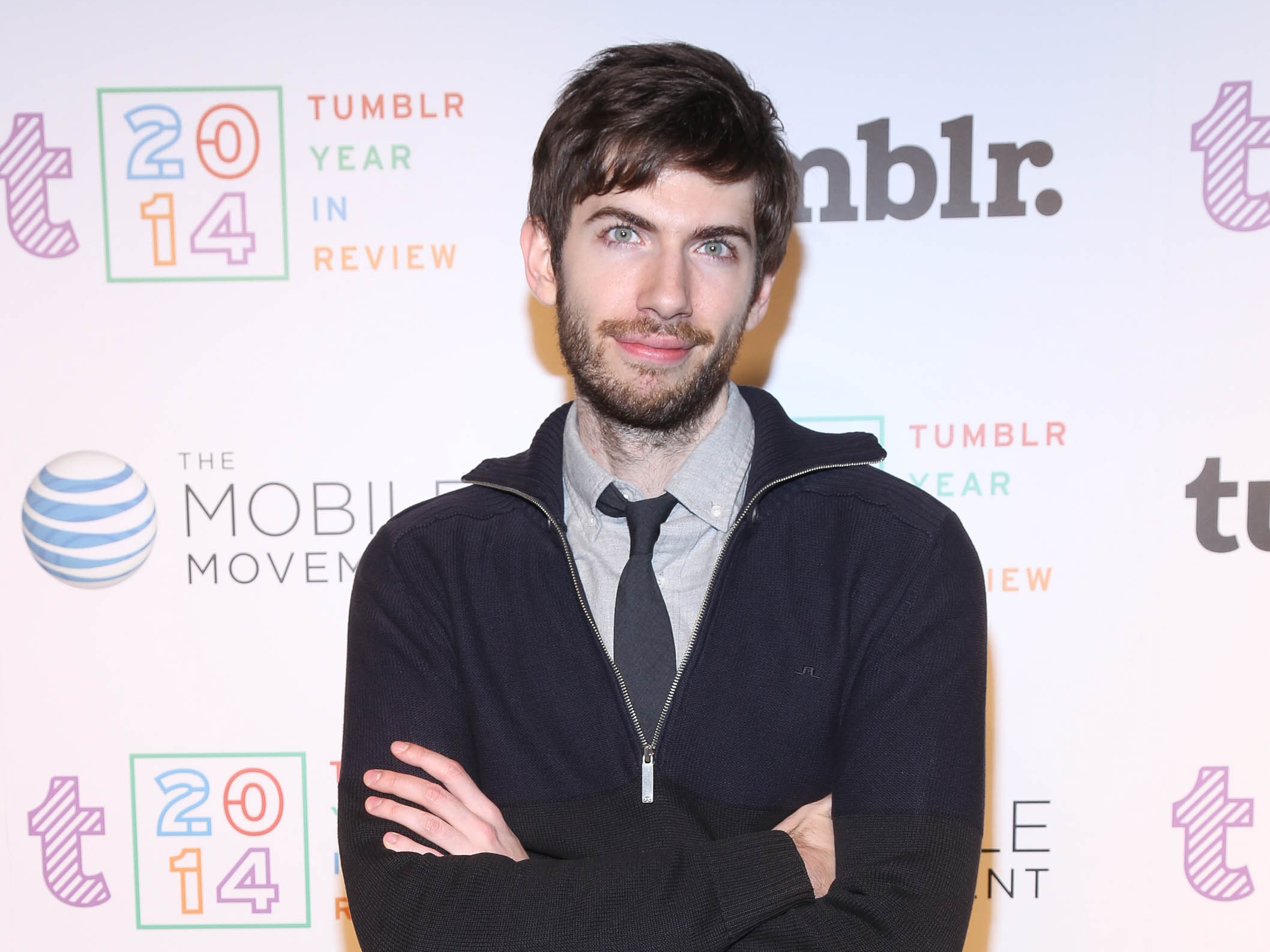 Rob Kim/Getty Images for TumblTumblr was eventually acquired by Yahoo.

In 2007, David Karp founded Tumblr, the micro-blogging and social-networking site. At the time, Karp was working from his bedroom in his mother’s small apartment in New York. According to The Guardian, on the night the site went live, it gained 75,000 users.

In an interview with The San Diego Union-Tribune about Karp’s love for computers, Karp’s mum said, “David would come running through the apartment saying, ‘Mum! Mum! There’s this and this and this!’ And I didn’t know what the heck he was talking about. Because it was a whole other language.”

The Washington Post reported that in 2013, Tumblr sold to Yahoo for $US1.1 billion. But in 2019, WordPress bought the blogging site for a rumoured mere $US3 million.

Michael Dell started his company in his dorm room at The University of Texas at Austin before moving to his nearby garage for more space. Justin Sullivan/Getty ImagesMichael Dell dropped out of college after his freshman year.

In 1984, most computers were mailed in separate parts, with consumers expected to assemble them themselves. Michael Dell wanted to sell custom-built computers designed for individual company’s specific needs.

The original company name was PC’s Limited, which he started in his college dorm room at UT Austin. Needing more space, Dell moved to his nearby garage, eventually dropping out of college to pursue Dell full time.

The first Harley Davidson motorcycle was built in a shed in Milwaukee, Wisconsin. In 1901, William S. Harley drew a blueprint for an engine that could fit inside a bicycle. In 1903, William and his brother Arthur built the first Harley Davidson motorcycle in a 10-by-15-foot wooden shed.

The shed’s door had “Harley Davidson Motor Company” written on it.

Today, Harley Davidson is valued at about $US5.1 billion. In 2019, there were an estimated 1,569 dealerships around the world. 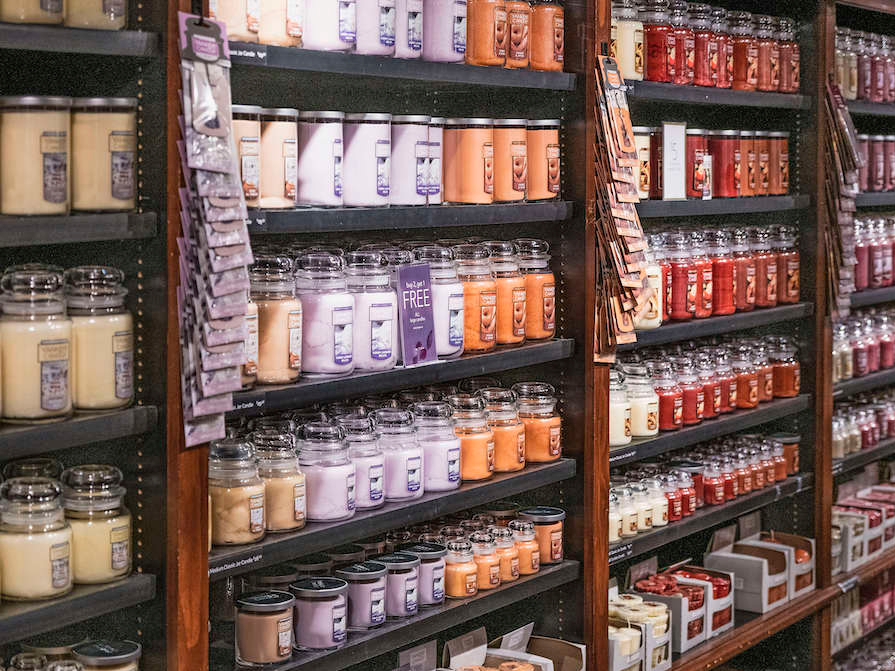 John Greim/LightRocket via Getty ImagesYankee Candles can be found all around the world.

In 1969, the then 16-year-old Mike Kittredge melted crayons and canning wax to make his mother a candle for Christmas in a milk carton.

A neighbour was also interested, eventually inspiring Kittredge to design and craft the candles in his family’s kitchen, where the company known now as Yankee Candle was eventually born. After bonding on a camping trip, Bill Hewlett and David Packard began renting a garage in Palo Alto and working there part-time. In 1938, the duo created Hewlett-Packard’s first product, the resistance-capacitance audio oscillator, which was used to test sound equipment.

When naming the company, the duo flipped a coin to decide whose name should go first. 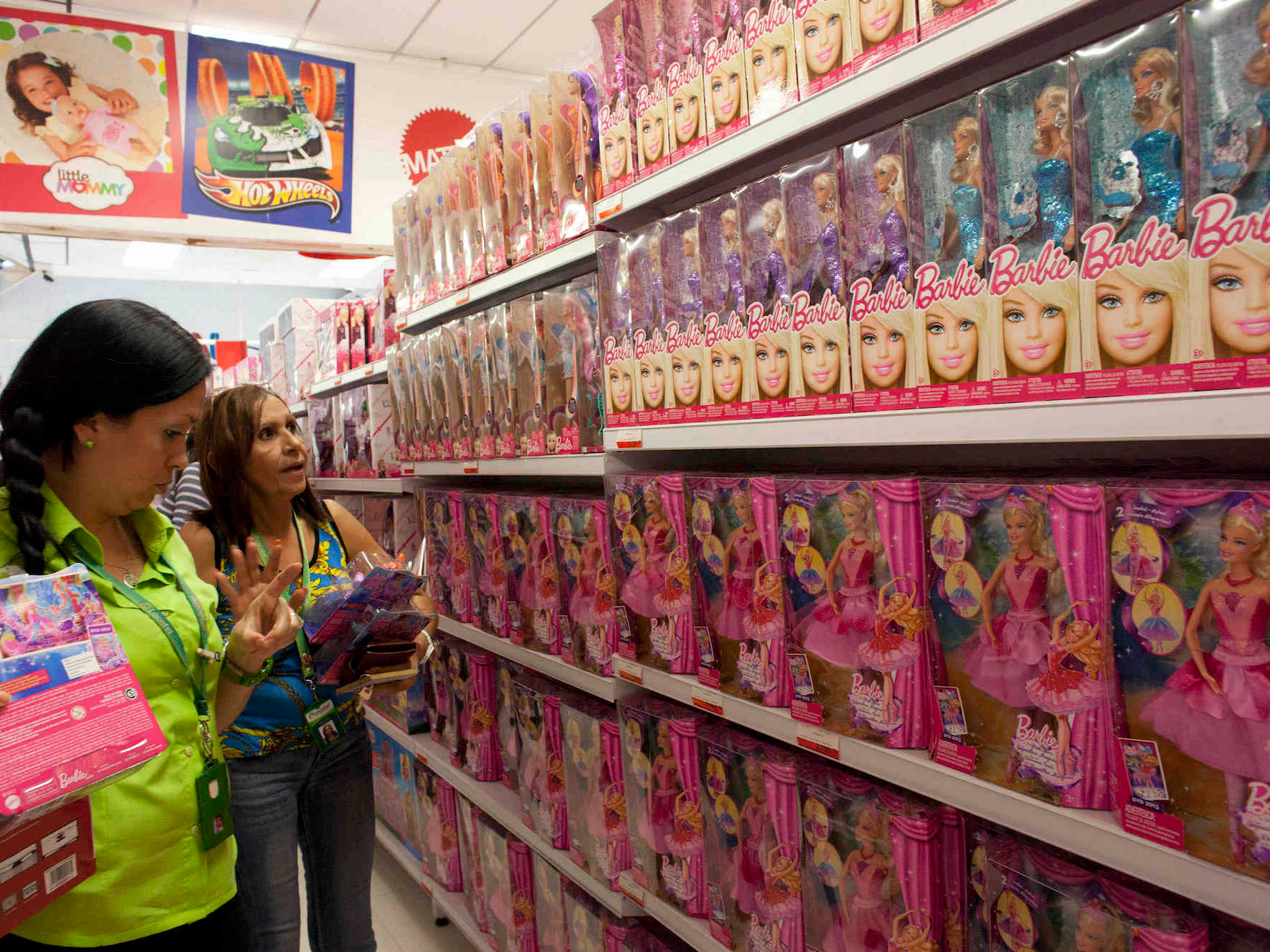 AP Images / Ariana CubillosRuth Handler, Elliot’s wife, had the idea for a Barbie doll in 1959.

In 1944, Matt Matson, a skilled craftsman, was working out of his garage in Southern California when Elliot Handler asked if he could build some of his picture frame ideas. Handler’s wife Ruth then took the samples and sold them for $US3,000 at a local photography studio.

In October of 1944, after the frames were a huge success, Matson and Handler decided to combine their last names, and Mattel was born.

While building frames in the garage, Handler also made dollhouse furniture out of the leftover wood from the picture frames. The furniture became a huge success and the company eventually pivoted towards making toys. The pivot paid off, as today Mattel is valued at about $US6.5 billion.