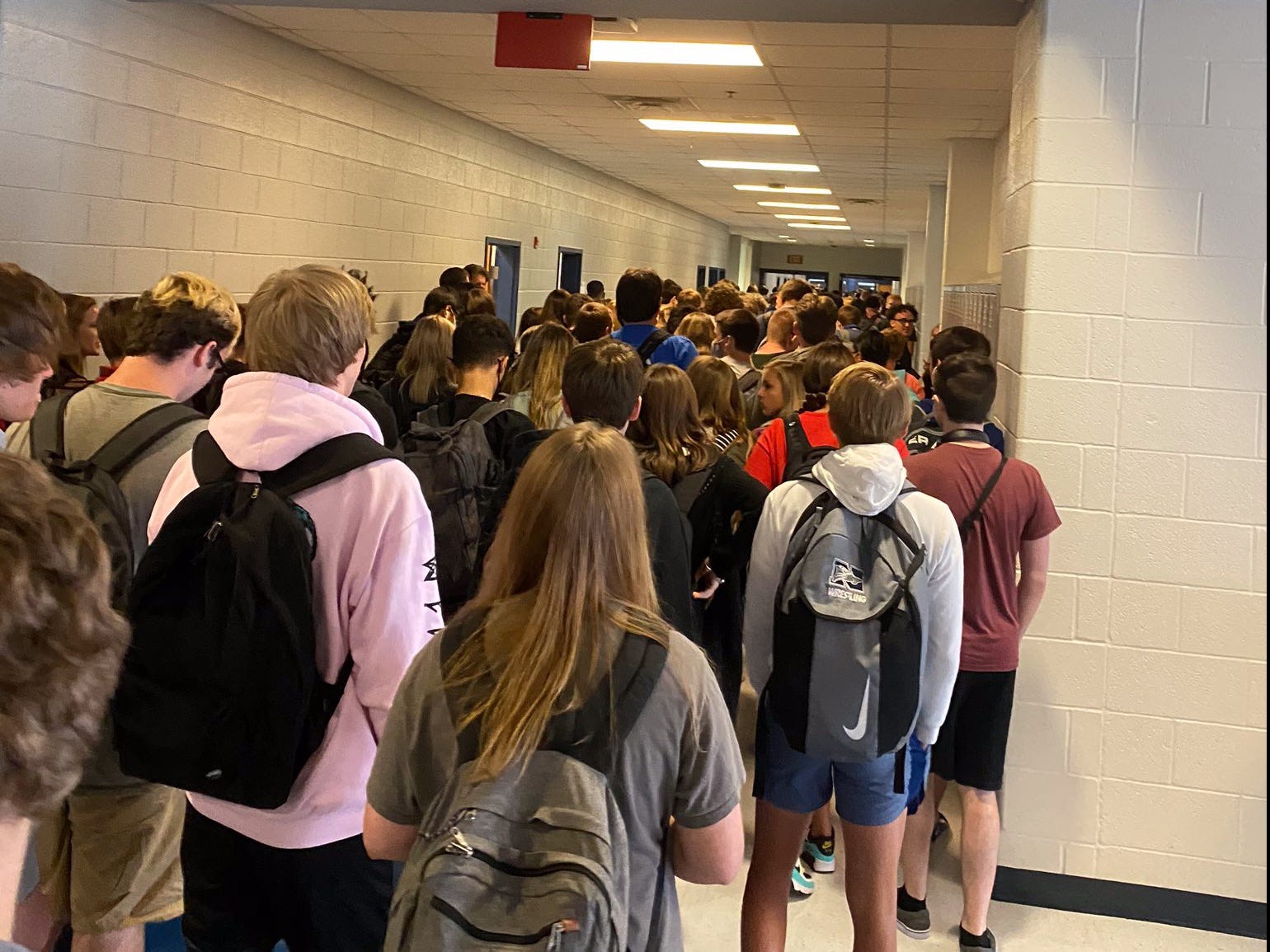 At least one student has been suspended for posting pictures of her crowded high school hallways amid intense debate about how to safely reopen schools, according to current students.

Photos showing a crowded hallway on the first day back at North Paulding High School circulated widely on social media on August 4, prompting national debate about the difficulty of reopening schools during the pandemic.

In the days since, current students told Insider, the school has been cracking down on anyone who posts pictures or video of the crammed conditions.

The images, which show a packed hallway between classes and many students not wearing masks, igniting concerns about the coronavirus spreading among students, staff and teachers.

The student who posted the video, identified as Hannah Watters, told Buzzfeed News she posted the photos to raise awareness of what conditions were like at the school.

“Not only did they open, but they have not been safe,” she said.

Two other current students confirmed to Insider that Watters had been suspended for 5 days as a consequence for posting the photos and videos, and that the school’s principal Gabe Carmona had made a school-wide announcement warning others of “consequences” for posting anything else.

The school’s student handbook includes a section prohibiting students from making audio or visual recordings without permission from school adminstrators, or using personal technology devices for non-instructional purposes, according to a copy of the document obtained by Insider.

Wearing a mask is a ‘personal choice,’ according to school policy

Many people reacting to the photos on social media expressed concern that few students appear to be wearing masks.

Clear evidence suggests that masks slow the spread of the virus.

A document from the school district states that wearing a mask is a “personal choice” and that district official “strongly encourage” it but have not mandated it. The document also states that social distancing “will be employed as is feasible and practical.”

Some students who do wear masks have been bullied by their peers, according to one parent. And a current student, who wanted to remain anonymous out of fear of repercussions, said wearing a mask was uncommon and elicited stares from peers at school.

“There were so many few people wearing masks that it felt as if we were the odds one out,” the student said.

A NextDoor post also notes that students had been bullied for wearing masks at South Paulding High School in the same district.

The school district said that the photos do ‘not look good’

The superintendent of the district, Brian Otott, sent out an email August 4 in response to the photos spreading on social media, confirming they depict North Paulding High School.

Referring to the first image to be widely-shared, Otott said “there is no question that the photo does not look good,” and that he understood concerns. But he took aim at people “using it to criticise without context our school reopening efforts.”

Otott said students pass through hallways only briefly. He also cited the state’s Department of Health, which advised that the real risk is being within six feet of a contagious person for 15 minutes or more.

The district, which serves 30,000 students, is going forward with previous plans to switch to remote learning for two days this week, August 6-7, so “schools can step back and assess how things are going so far.”

“It is unfortunate that in the age of instant communication these issues can escalate so quickly without sufficient context,” Otott wrote in the email.

Representatives from the school district did not immediately respond to a request for comment.

Some North Paulding students have already tested positive for the coronavirus

Students at the North Paulding High School football team tested positive for the coronavirus and began showing symptoms prior to the first day of school, according to a letter from school principal Gabe Caroma to parents. As a result, football practice was temporarily cancelled.

The letter notes that affected football players may have had contact with other students, and urges parents to monitor their children for symptoms.

Mounting research paints a bleak picture for schools trying to reopen. Most large schools can expect coronavirus cases within 1 week.

Parents in a school district in Georgia, are demanding in-person classes. But hundreds of employees have tested positive or been exposed to COVID-19, revealing the biggest blind spot in the fight to reopen schools