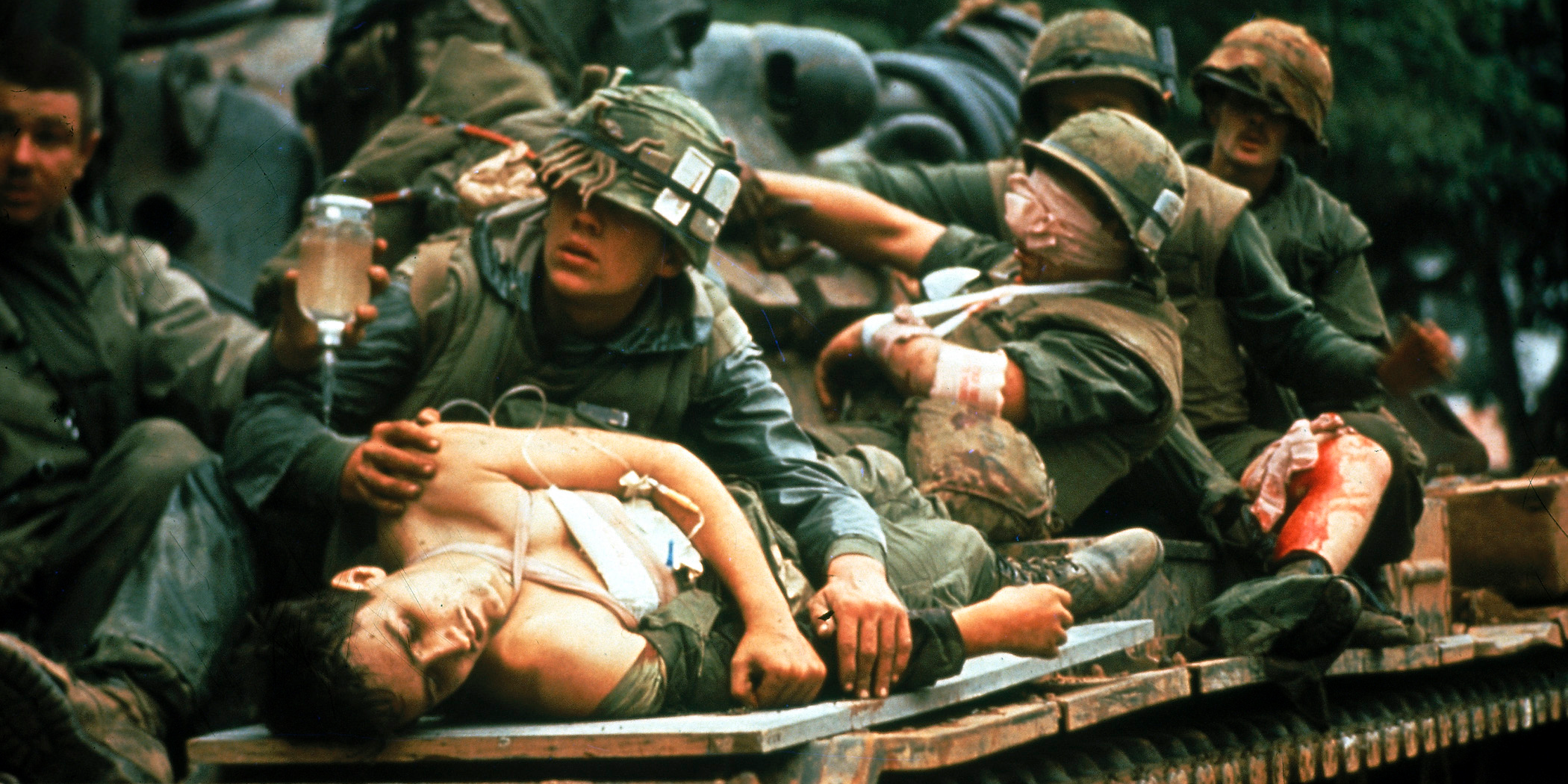 John Olson/The LIFE Images Collection via Getty ImagesWounded troops on a tank used as a makeshift ambulance during the Battle of Hue, February 15, 1968.

The Battle of Hue kicked off in the early morning hours on January 31, 1968. The battle, in a historic city near South Vietnam’s border with North Vietnam, was a major part of the larger Tet Offensive and lasted until the first days of March that year.

The month of fighting it took to liberate Hue had a profound effect on the war, changing the way Americans and their leaders felt about it. But before it was over the Battle of Hue would also produce one of the most iconic images of that war or any other.

In mid-February, during the first week of fighting inside the city’s Citadel, photographer John Olson captured a group of wounded Marines riding a Patton tank away from the fighting.

The photo appeared in the March 8 edition of Life magazine, spread across two full pages in a six-page section of colour photos from the battle, according to Mark Bowden’s 2017 book, “Hue 1968.” Despite its prominence, there was no backstory or detailed captions with the pictures.

The Marines pictured were not identified. But front and centre in the photo, with a bandage around his torso and neck and a tube snaking into his arm, appears to be 18-year-old Alvin Bert Grantham.

“Alvin Grantham was a Marine who was fighting inside the Citadel. He’s from Alabama,” Bowden told Business Insider in a late-January interview.

Olson never got the names of the men on the tank, Bowden said. “He years later told me he believed … that the man that he photographed was Grantham.”

Grantham suffered a grievous injury during the fighting and was evacuated on a tank, but doubts persist about whether he was the wounded man in the photo.

Fighting in the Citadel 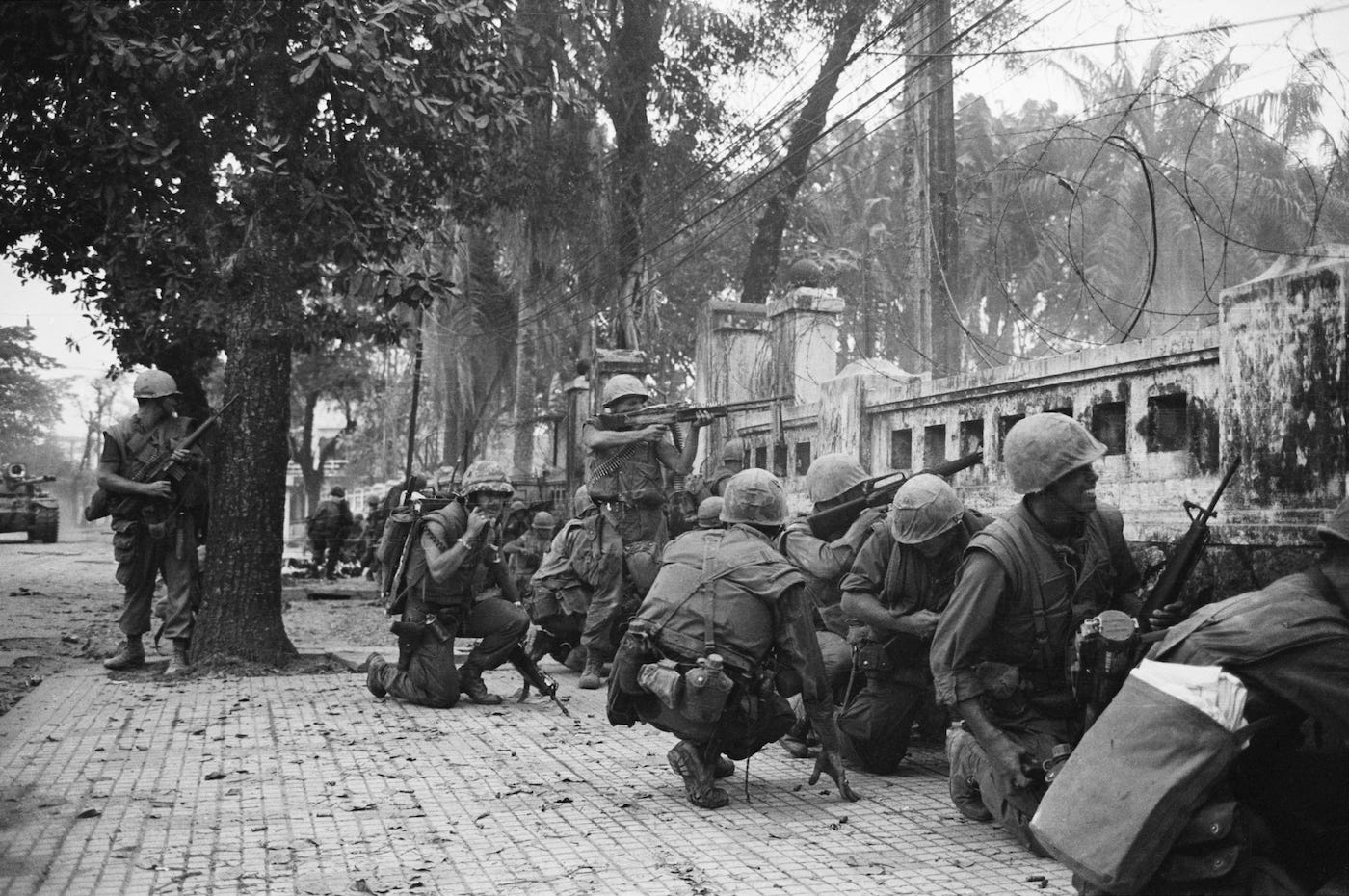 Bettmann/Getty ImagesUS Marines pinned down by sniper fire behind this wall near the old Citadel in Hue, South Vietnam, February 4, 1968.

Grantham, a native of Mobile, had dropped out of high school and started working as a bricklayer with a friend, Freddie Thrift. With the draft looming, the pair joined the Marines in 1967, “because the marines were reputed to be the best fighters, and if they were going to go to Vietnam anyway, they might as well go with the best,” Bowden writes.

Grantham and Thrift believed they could stay together if they enlisted together, but they were separated even before reaching boot camp at Parris Island in South Carolina. Grantham graduated two weeks before Thrift and went to the Fifth Marine Regiment to join a M60 machine-gun squad.

“Grantham found the marines he was with to be cruel. After a while he understood why they were that way, but it never stopped bothering him,” Bowden writes.

This feeling arose from everyday observations – the way fellow Marines talked about Vietnam and the way they interacted with the Vietnamese. “The normal rules of human feeling and behaviour seemed to have been suspended,” Bowden notes.

Through much of the fighting in Hue, Marines found themselves separated from the enemy by just a street or alleyway. The Marines suffered immense casualties as they advanced into withering enemy fire.

Grantham’s experience was no different. “On the day he was wounded, all four of the other members of his machine-gun squad were hit by shrapnel,” Bowden writes. “He was the only one unhurt. He had dragged them, one by one, to cover.”

After carrying out the others and retrieving their gun, Grantham ran down the street, toward a house on the corner, where someone else was yelling that they needed the gun. 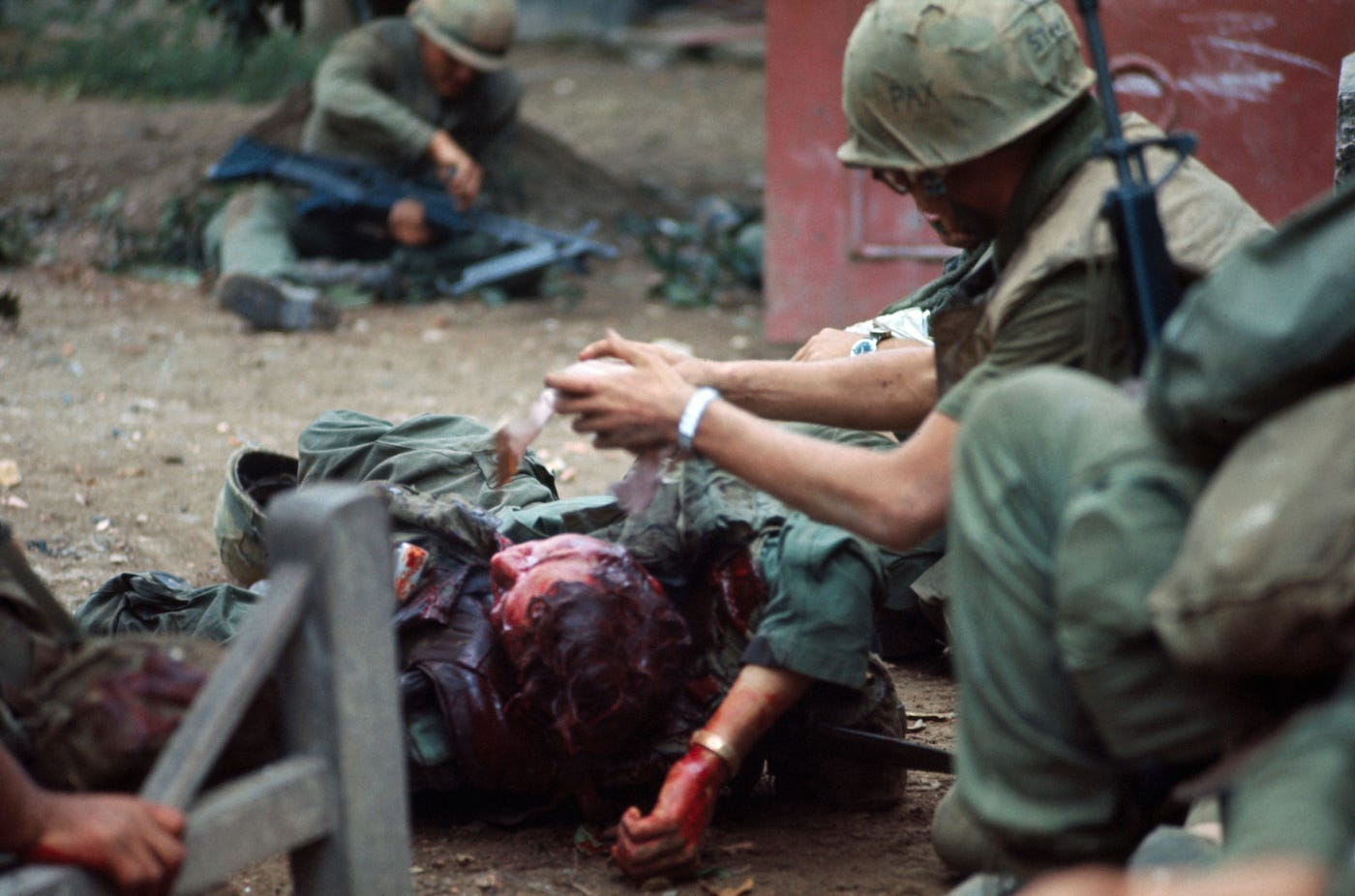 Upon reaching the last house before his destination, Grantham stopped and peeked around the corner, spotting an enemy soldier pointing a rifle at him, according to Bowden’s account. He ducked into the rear of the house, narrowly avoiding a hail of bullets. He then set up his gun in a rear window and shot toward the soldier who fired on him.

After exchanging fire, Grantham snuck another look out the window. That’s when he was hit square in the chest.

“It felt like being hit by a bus. It knocked him backward off his feet and he landed on his back,” Bowden writes.

Another Marine began to treat his wound.

“His shirt was torn off and he could see blood spurt out of the hole when he exhaled and suck back into him when he tried to inhale,” Bowden writes. “The marine took the cellophane off a cigarette pack and stuffed it over the wound … Then he placed a compress over it and bound it to him tightly with a bandage wrapped around his chest and neck.”

Several of Grantham’s ribs had shattered, and he was turned on his side so his working lung wouldn’t fill with blood. Other Marines kept him awake until he was put on a door and carried to the tank. At the second aid station he reached he was taken off the tank and zipped into a body bag before someone realised he wasn’t actually dead.

After surgery, he was transferred to an Army hospital in Japan. He was walking again by the end of March. He found he had gotten malaria in Vietnam, and while in Japan he caught typhoid fever. Having shed 50 pounds, he was sent to Florida to continue recovering. Once there, he was quarantined when doctors found that he still had typhoid.

He was sick for a year. Doctors eventually found an amoeba in his liver, left over from a bout of dysentery in Vietnam.

“He did not feel normal again until April 1969,” Bowden writes. 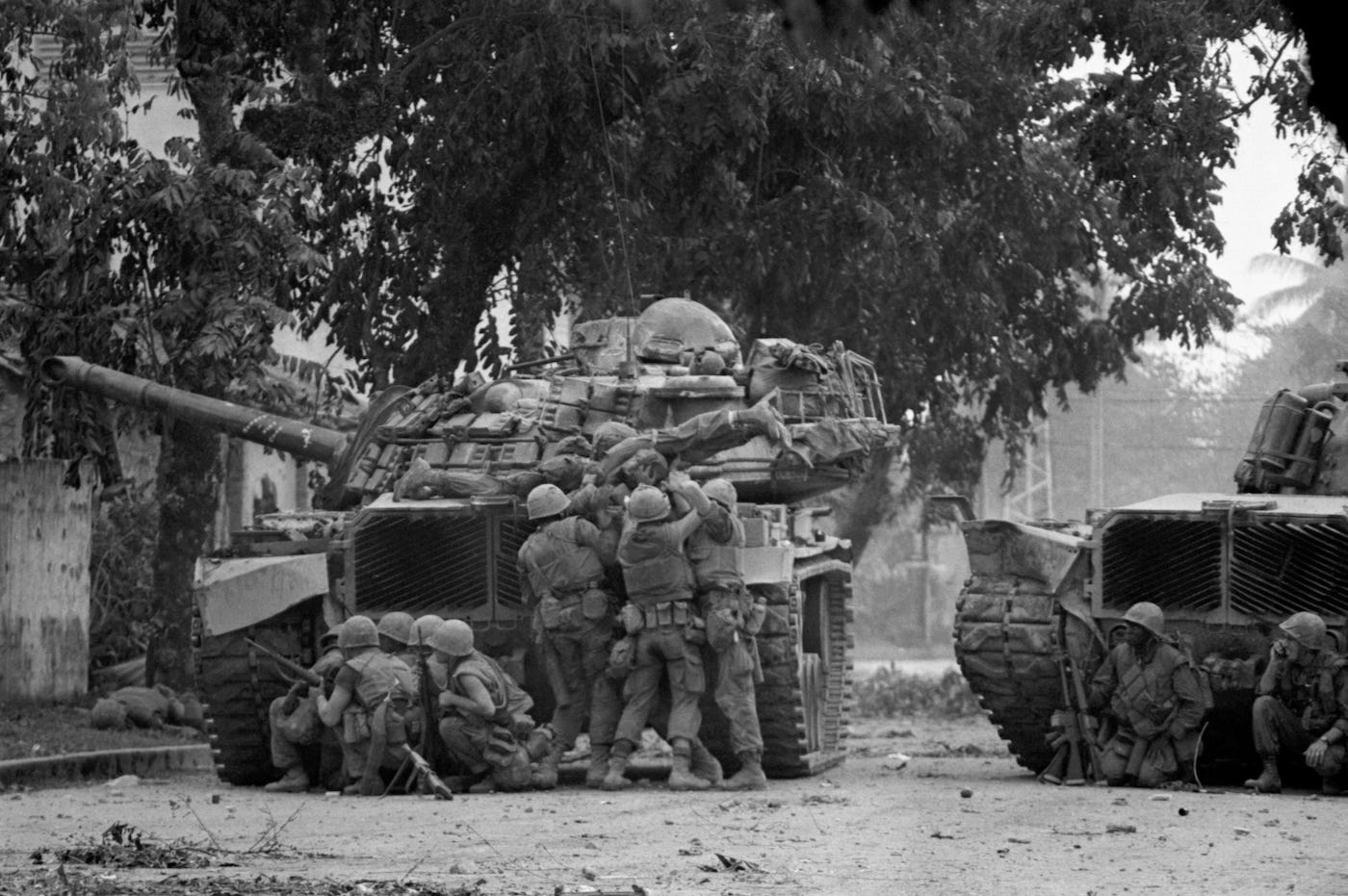 Bettmann/Getty ImagesUS Marines take cover behind a tank after Vietcong snipers opened fire on them in Hue, South Vietnam, February 3, 1968.

A.B. Grantham is the only character whose story is told from the battle all the way to the present day, standing as a powerful end piece to the book, Bowden said.

Grantham’s sister’s former husband, who had also been a Marine, first spotted Grantham in the Life magazine photo spread, showing it to Grantham while he was still in the hospital in the US.

In the intervening decades, Grantham got on with life. Marrying, divorcing, remarrying, raising kids, and working in the paper and technology industries – all the while avoiding memories of the weeks he spent in “the shadow of death” in Hue.

The photo has become famous, and dispute has arisen about who exactly is in it. 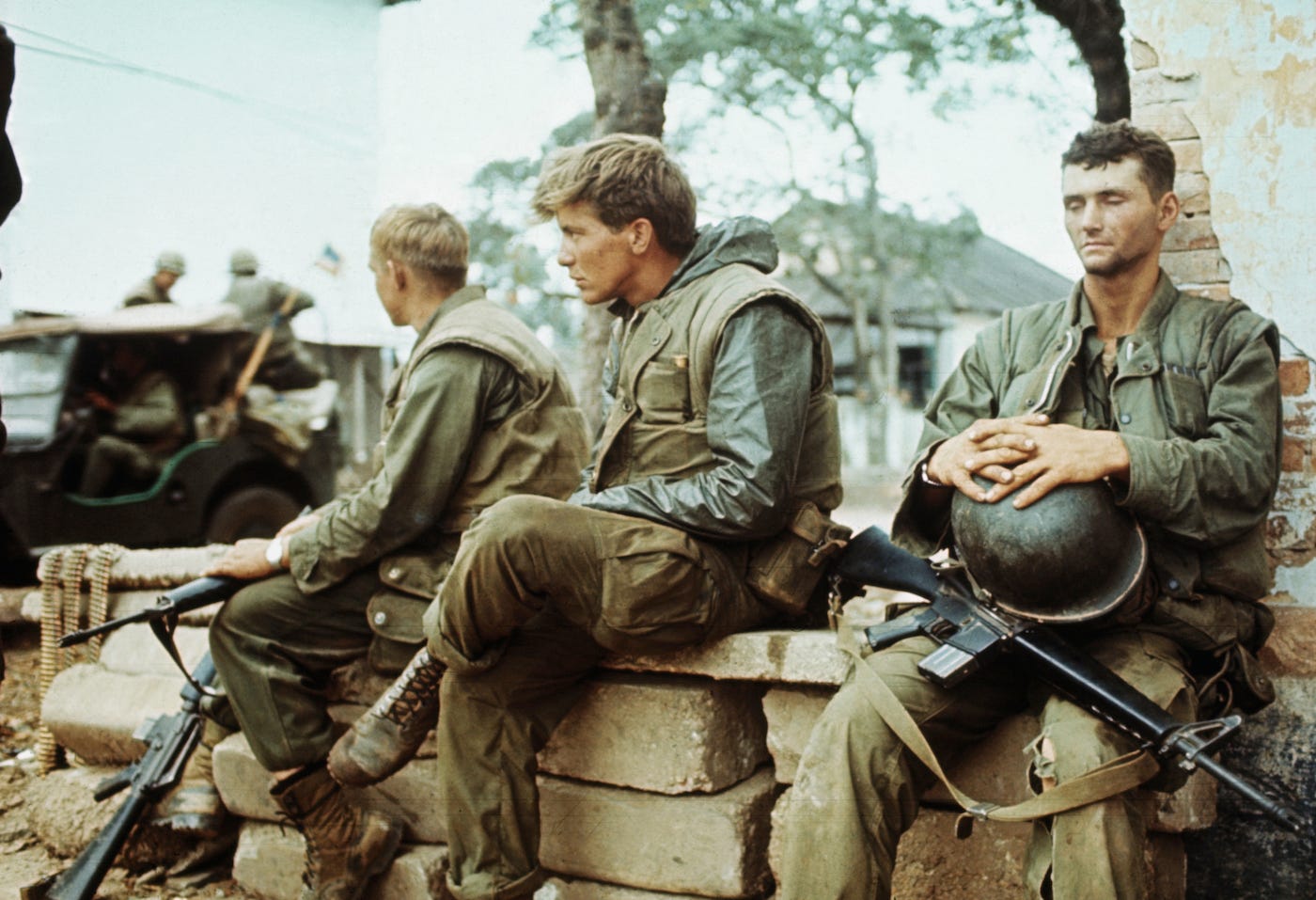 Bettmann/Getty ImagesUS Marines rest during a pause in the fighting in Hue, South Vietnam, February 5, 1968.

“Various Marines have claimed over the years to be in that picture. There’ve been press accounts over the years that have named certain people who others say weren’t there,” Bowden said in January, comparing it to the famous photos of a sailor kissing a woman in Times Square and of Marines rising the US flag on Iwo Jima.

Whatever debate there may be about the identity, Bowden said, what happened to Grantham is accounted for.

“There’s ample documentation, and it’s true,” Bowden said. “But if it is a different Marine, both Grantham and that Marine were shot through the chest. Both were evacuated on a tank in the middle of the battle.”

A British photographer also took a picture of what appeared to have been the same scene. He didn’t get the names of the troops in the photo either, “but he came to believe that the Marine in the photograph was someone other than Grantham,” Bowden said.

“We can’t be completely certain that [Grantham is in the photo] even though he says it’s him,” Bowden added. “As A.B. says, ‘like most people, I recognise myself in a photograph.'”