Tropical Storm Isaias has strengthened into a hurricane, causing floods in the Caribbean and due to smack the US coast this weekend

National Hurricane CentreThe winds expected from Hurricane Isaias over the next five days as of 2 a.m. EDT on Friday.

Tropical Storm Isaias has strengthened into a hurricane and is due to hit Florida’s coast on the weekend.

As of 5 a.m. EDT Friday, Hurricane Isaias was located around 325 miles (620 kilometers) of Nassau in The Bahamas, according to the National Hurricane Centre (NHC).

The NHC’s forecast said that the centre of the hurricane will move “near or over” the Southeastern Bahamas later on Friday.

It is also warning of rainfall across the Caribbean, which “will lead to life-threatening flash flooding and mudslides, as well as river flooding.”

Isaias has already caused flooding and blackouts in Puerto Rico.

Parts of Florida have also been put under a Tropical Storm Watch.

The hurricane is moving northwest at 17 miles per hour (28 km per hour), meaning it’s expected to arrive “near or east of the Florida peninsula on Saturday and Sunday.”

It currently has sustained winds of 80 miles per hour (130 km per hour), along with gusts of higher winds, and it could get stronger throughout the day.

Isaias expected to remain a hurricane-level storm for the next few days, the NHC said. 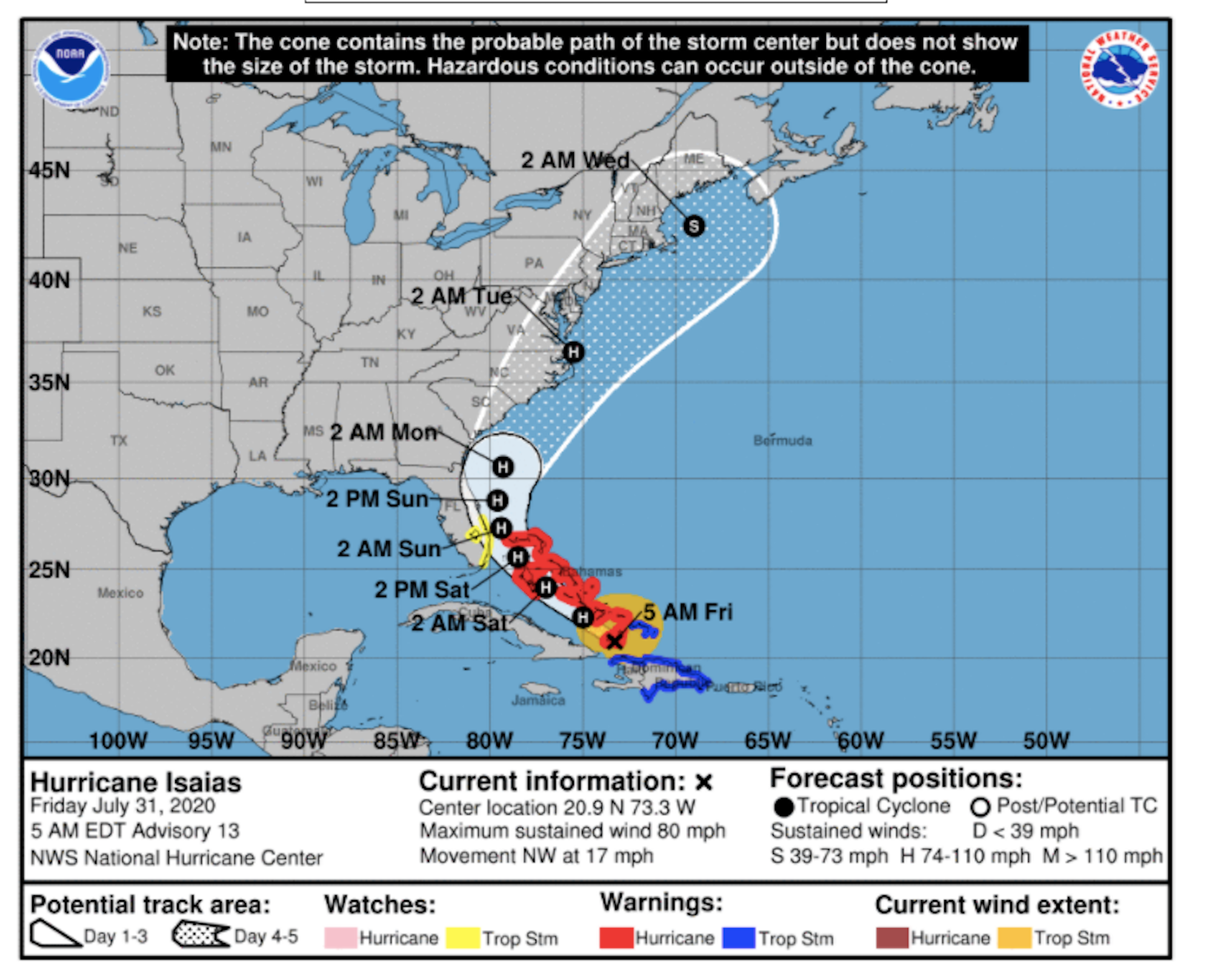 National Hurricane CentreThe watches and warnings in effect for Hurricane Isaias as of 5 a.m. EDT on Friday.

NHC warnings for the Caribbean and Florida

The NHC is predicting up to 12 inches of rainfall in parts of the Dominican Republic and Northern Haiti, up to eight inches in the Bahamas and Turks and Caicos, and up to four inches in Cuba.

Large waves have already hit Puerto Rico, the Dominican Republic, the Turks and Caicos, and the southeastern Bahamas, the NHC said.

They are also due to hit Cuba and parts of The Bahamas later on Friday, and the east coast of Florida on Saturday.

“These swells are likely to cause life-threatening surf and rip current conditions,” the NHC said.

A Hurricane Warning – which means that hurricane conditions are expected within 36 hours – is in place for the Northwestern Bahamas, Southeastern, and Central Bahamas.

A Tropical Storm Warning – which means tropical-storm conditions are expected within 36 hours – is in place for the southern and northern coastlines of the Dominican Republic, Haiti’s north coast, and the Turks and Caicos Islands.

“Additional watches or warnings may be required for a portion of the Florida peninsula later today,” the NHC warned early Friday.

The centre is also predicting up to six inches of rain in parts of Florida over the weekend, which “could result in isolated flash and urban flooding, especially in low-lying and poorly drained areas.”

And it warned that heavy rains could hit North and South Carolina next week, which could also result in some flash flooding. 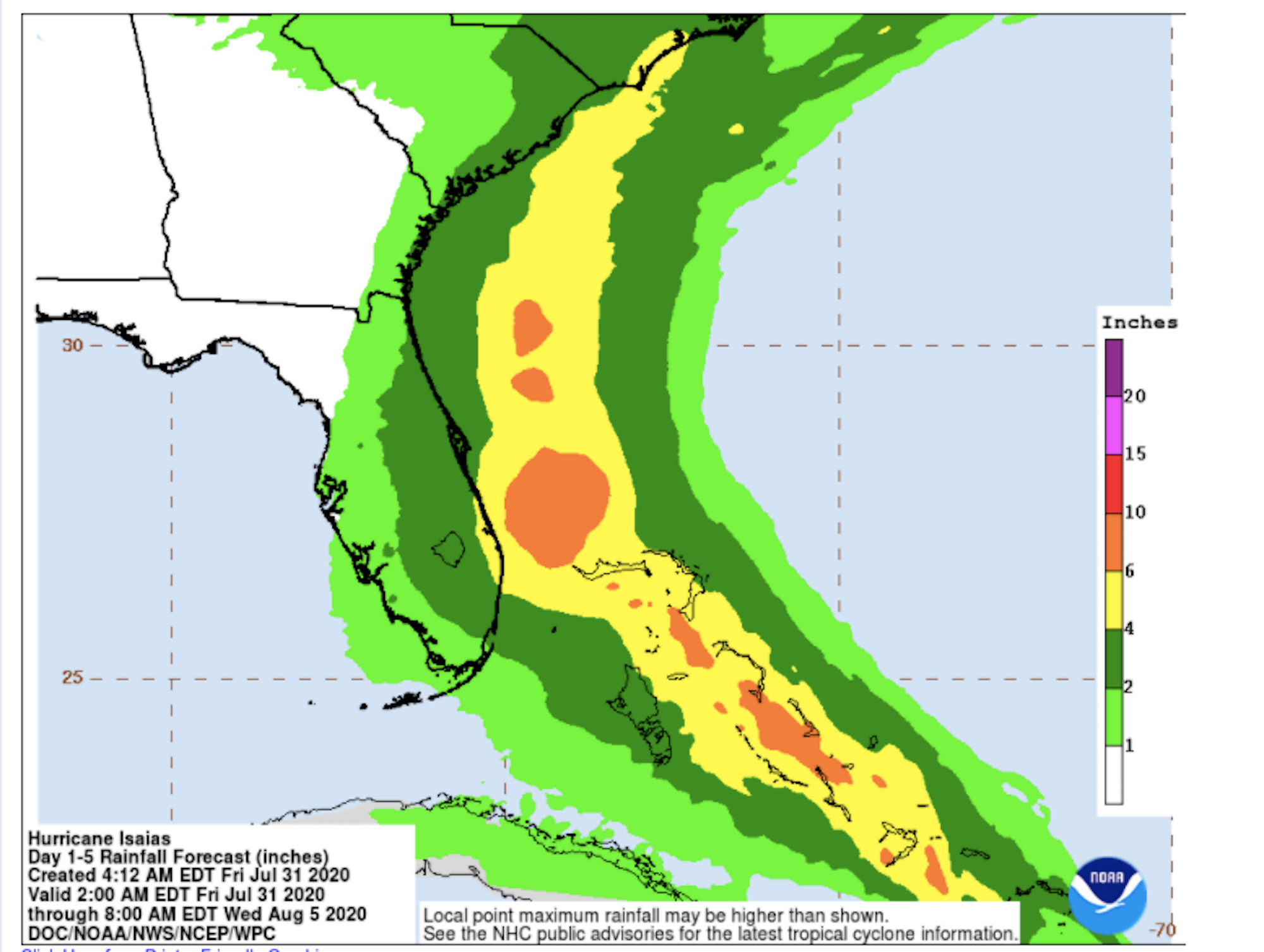 A hurricane during a pandemic

Florida is currently dealing with one of worst coronavirus outbreaks in the US, with more than 460,000 cases of COVID-19 and more than 6,500 deaths. Hospitals there say they are already strained thanks to the pandemic.

Meanwhile, Caribbean countries, many of which have had small coronavirus outbreaks, have been hit hard by the halt in tourism over the pandemic.

Tourism typically fuels much of the island nations’ economies, and many nations had decided to reopen to tourists despite the health risks.

The Bahamas is still recovering from being hit by Hurricane Dorian, the most intense storm ever recorded to hit the country, which came last year.

Isaias made landfall at the Dominican Republic on Thursday. At the time it was a tropical storm, with sustained wind speeds hitting 60 miles per hour.

More than 300,000 people lost power and tens of thousands lost their water supply in Puerto Rico over wind and rainfall from the storm.

CNN also reported mudslides on the island, with one woman going missing.

Isaias is the second hurricane of this year’s season, after Hanna hit Texas on July 25.

It’s also the earliest storm with a name starting with “I” to ever form during a hurricane season.