“It was positive for me.” –Brazil’s President Jair Bolsonaro announcing he has tested positive for coronavirus, after months of flouting public health recommendations, rejecting masks, and doubting the seriousness of the pandemic. 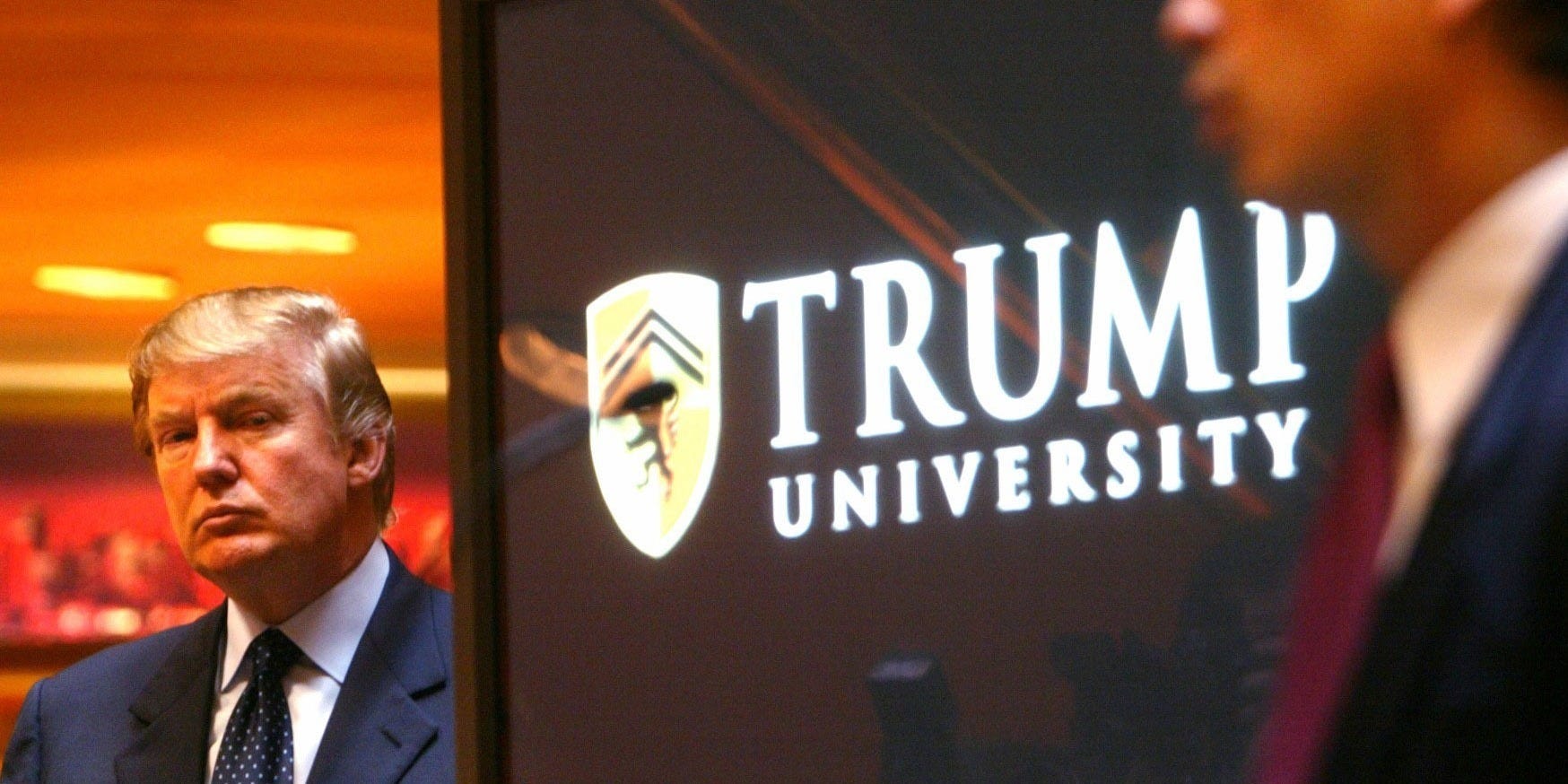 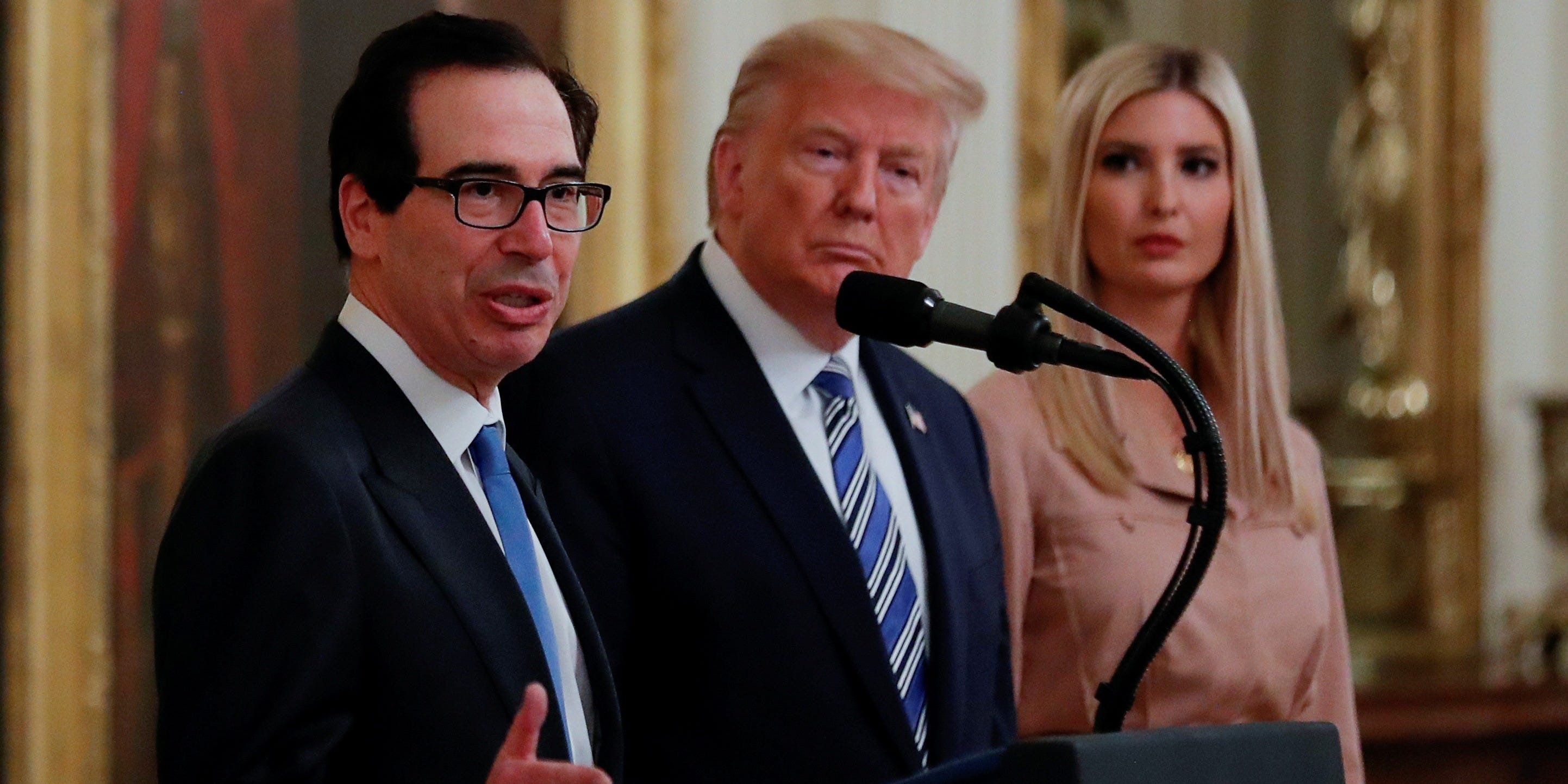 
Enough moralizing about companies that accepted the government’s emergency loans.

The US government finally released some details about the distribution of its emergency “Paycheck Protection Program” – specifically, which companies it gave money to and how much.

This disclosure is good: The PPP is taxpayer money, and taxpayers have a right to know where it went.

But the disclosure has also triggered a wave of moralizing about which companies accepted the loans and whether they should have or not. Some companies weren’t deserving of the money, the complainers say, either because they’re owned by rich people or because they weren’t as badly off as other companies. So they shouldn’t have accepted it.

This moralizing is unfair and silly.

The PPP was designed to reduce the number of people laid off as a result of the pandemic and lockdowns. It did that. You can quibble with the design and execution of the program – it might have been better for the government to just pay a portion of employees’ salaries for a while, for example, as some governments in Europe did.

The rollout of the program could have been smoother and fairer, including with more stringent means-testing. Those complaining that companies owned by “billionaires” got funding should consider that the companies might still have chosen to fire people had they not been eligible.

But bashing companies for taking money and maintaining their payrolls misses the point of the program.

If the government had not doled out about $US500 billion to 4.5 million US businesses, the already horrific layoffs in the US would have been far worse. The program was explicitly designed to give companies the incentive and means not to fire people, and it did that. Stop blaming companies for doing what the government wanted them to do. – HB 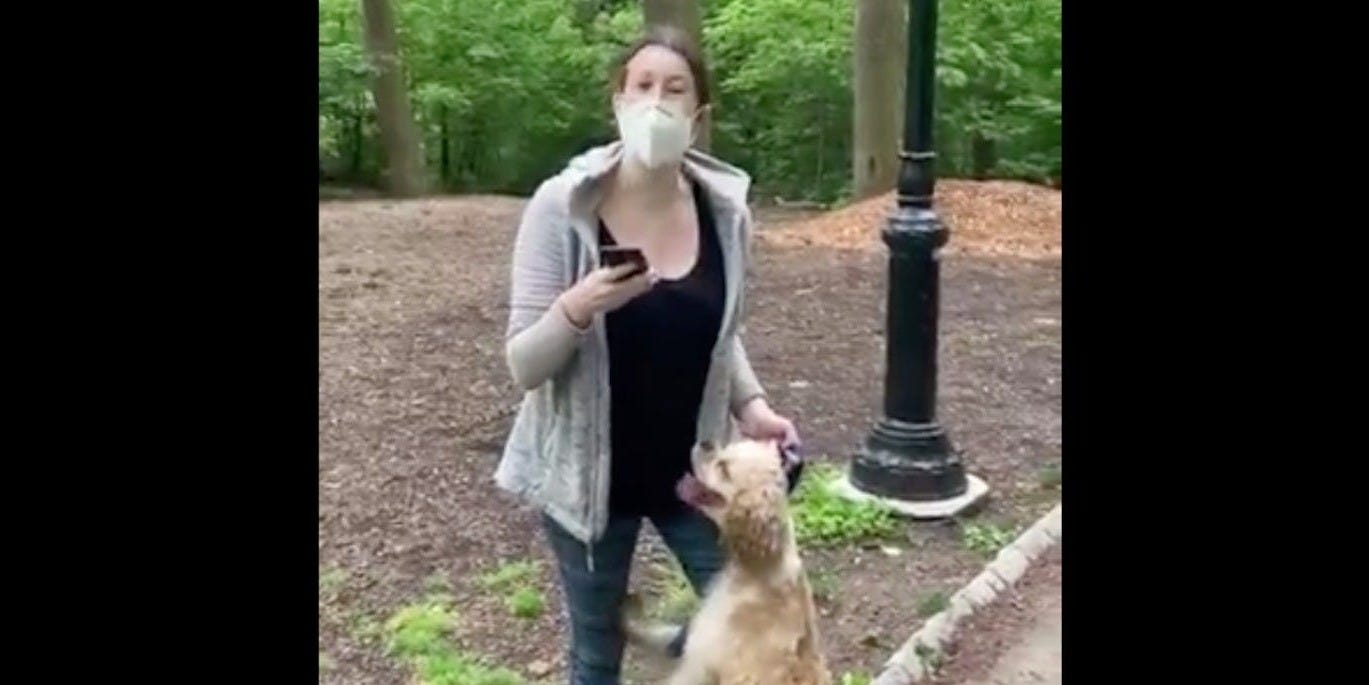 Amy Cooper has been charged with filing a false report, a misdemeanour that could cost her a year in jail. You know that Amy Cooper is the Central Park dogwalker who called the cops on a Black birdwatcher, and the fact that we don’t need to explain that is why she shouldn’t be criminally charged.

What Amy Cooper did was despicable, and could easily have endangered the life and freedom of birdwatcher Christian Cooper. She absolutely should be punished. And she has been punished, as this thread from the brilliant Josie Duffy-Rice explains. Amy Cooper lost her job, her anonymity, and her reputation. Unless she invents a COVID vaccine, that 60 seconds in Central Park will be the first line of her obituary.

The American carceral system is a catastrophe, and we should aspire to keep people out of it. If wrongdoers can be punished with public shame and economic consequences, that should satisfy us. Sending Amy Cooper to jail is punitive. It won’t do society any good. Her public humiliation already taught us the lesson we needed to learn. – DP

Does the President of the United States disavow the flag honouring a rebellion against the government he runs, a flag now abandoned by even NASCAR and the state of Mississippi? His press secretary cannot say.

He’s doing this for two reasons. He’s convinced it will help him win re-election, since the strategy worked in 2016. As importantly, he clearly enjoys it. If there’s any consistency to Trump over the past five years, it’s that he takes such glee in fomenting division, especially racial division.

But maybe it won’t work this time. The broader American public increasingly values the Black Lives Matter movement. Also important is what columnist Jamelle Bouie notes today, which is that white Americans are comfortable voting for racial grievance when they feel economically secure, but demand competence and calm during a crisis. (As Bouie recalls, Sarah Palin’s thrilling proto-Trumpism failed badly in 2008 in the face of a global economic collapse.)

Almost no one wants a culture war when the economy is collapsing and a pandemic is raging. Most people long for a steady hand and a plan. Donald Trump has neither. – DP

Politically diverse writers and artists co-sign a letter in support of “The free exchange of information and ideas.”

Harper’s magazine today published “A Letter on Justice and Open Debate,” co-signed by over 140 writers, artists, and luminaries of impressively-diverse politics.

Their message is an affirmation of the “need to preserve the possibility of good-faith disagreement without dire professional consequences.” Essentially, that provocative, even unpopular opinions and arguments shouldn’t lead to career cancellations.

The co-signers express their support for the “Powerful protests for racial and social justice” that “are leading to overdue demands for police reform, along with wider calls for greater equality and inclusion across our society.” But, they caution, “this needed reckoning has also intensified a new set of moral attitudes and political commitments that tend to weaken our norms of open debate and toleration of differences in favour of ideological conformity.”

Citing recent examples: “Editors are fired for running controversial pieces; books are withdrawn for alleged inauthenticity; journalists are barred from writing on certain topics; professors are investigated for quoting works of literature in class; a researcher is fired for circulating a peer-reviewed academic study; and the heads of organisations are ousted for what are sometimes just clumsy mistakes.”

The letter calls out Trump and “the radical right” as genuine threats to free speech and democracy, but also warns of a growing culture of “an intolerance of opposing views, a vogue for public shaming and ostracism, and the tendency to dissolve complex policy issues in a blinding moral certainty.”

“Coronavirus Testing Delays in the United States: What Happened?” – May 1

The US tests too few people, delivers test results too slowly, doesn’t sample-test throughout the population, and lacks essential testing supplies. That was true in March, and it’s true today. Four months, and we’ve solved nothing. – DP 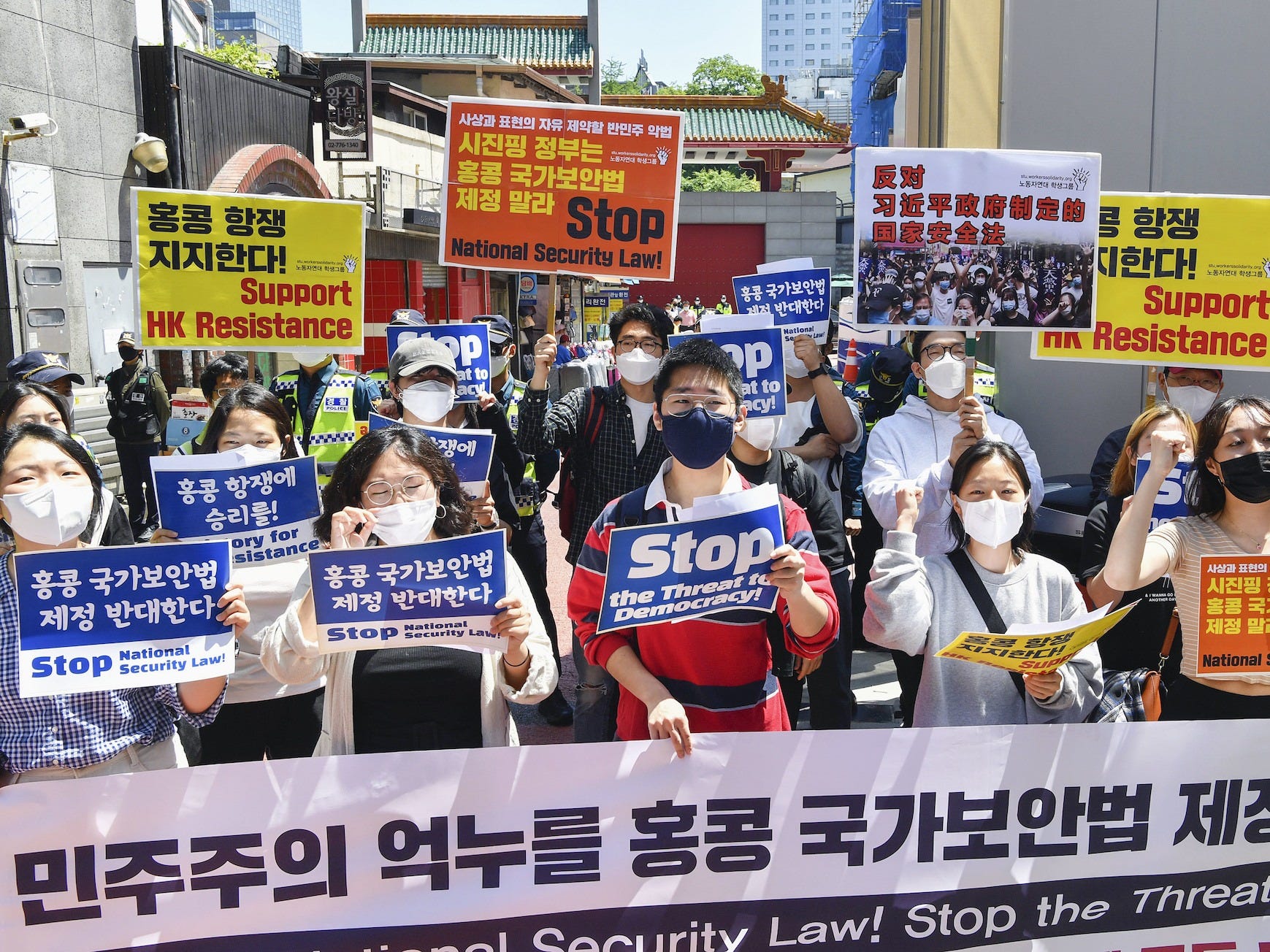 And just like that, Hong Kong is slipping behind the digital iron curtain.

There were some in the business community who did not fear China’s new Hong Kong security law. They felt that the law would stop the protests that have ravaged Hong Kong’s economy, at least that’s what they said in public.

Now, though, it seems clear that even Hong Kong’s internet is going to look more like the internet on the Chinese mainland. Authorities have informed companies like Google and Facebook that they need to take down posts, or turn in data about customers.So far Facebook and WhatsApp have paused sending any information to authorities. Google refused to take down posts. According to the law, their employees could be arrested if they don’t comply.

China’s internet is famous for its surveillance and self-censorship, for being a place where netizens are forced to speak in code to criticise the government. Hong Kongers have already started picking up that double speak to protect themselves, and it’s unclear how long US internet companies will stick around to be a party to repressive activity they don’t support on the mainland. As Hong Kong slips behind the digital iron curtain, they may exit stage left. – Linette Lopez

The economic recovery is stalling as the coronavirus resurges.

The health crisis and economic crisis are largely one and the same. The “lockdowns” of the spring exacerbated the economic impact of the pandemic, but most of the decline has been the result of people sensibly taking precautions to avoid getting sick. Our economy won’t fully recover until we get the coronavirus under control.

Not surprisingly, therefore, as the coronavirus resurges, the economic recovery is stalling or rolling over. Two charts from Bill McBride at Calculated Risk: 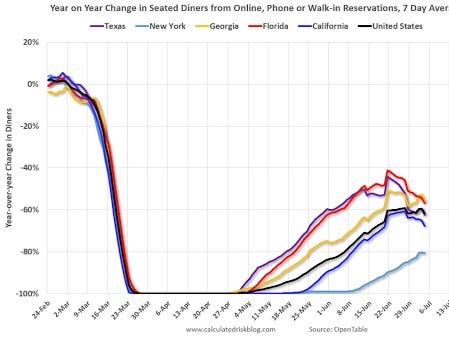 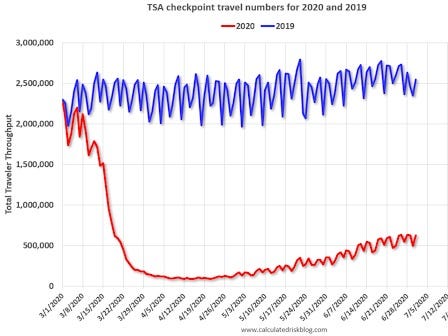 Calculated Risk has similar charts showing other real-time economic indicators. Movie theatre attendance, one of the worst, is still flat-lined near zero. Hotel occupancy is doing relatively well, at about half of normal. Gasoline consumption has recovered to about 90% of normal. Even when we can’t really “travel,” Americans still love to drive. – HB

Palantir has filed paperwork for an IPO.Here’s how the secretive big-data company cofounded by Peter Thiel makes its money.

The top 25 industries bailed out by PPP loans. Insider crunched the numbers on nearly 5 million loans. 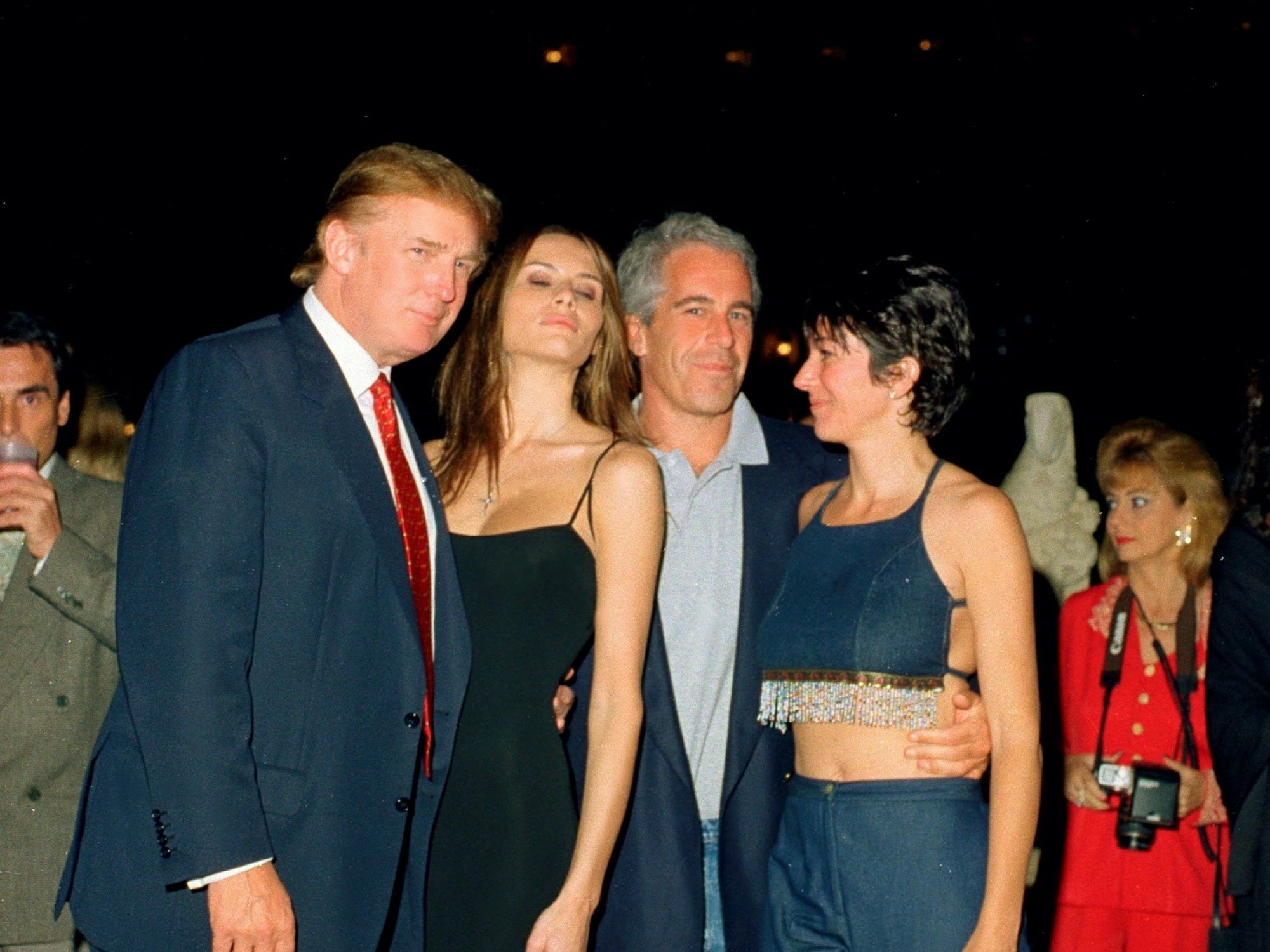 
Search Jeffrey Epstein’s black book. There are 1.510 names in it, and Insider made a searchable list. 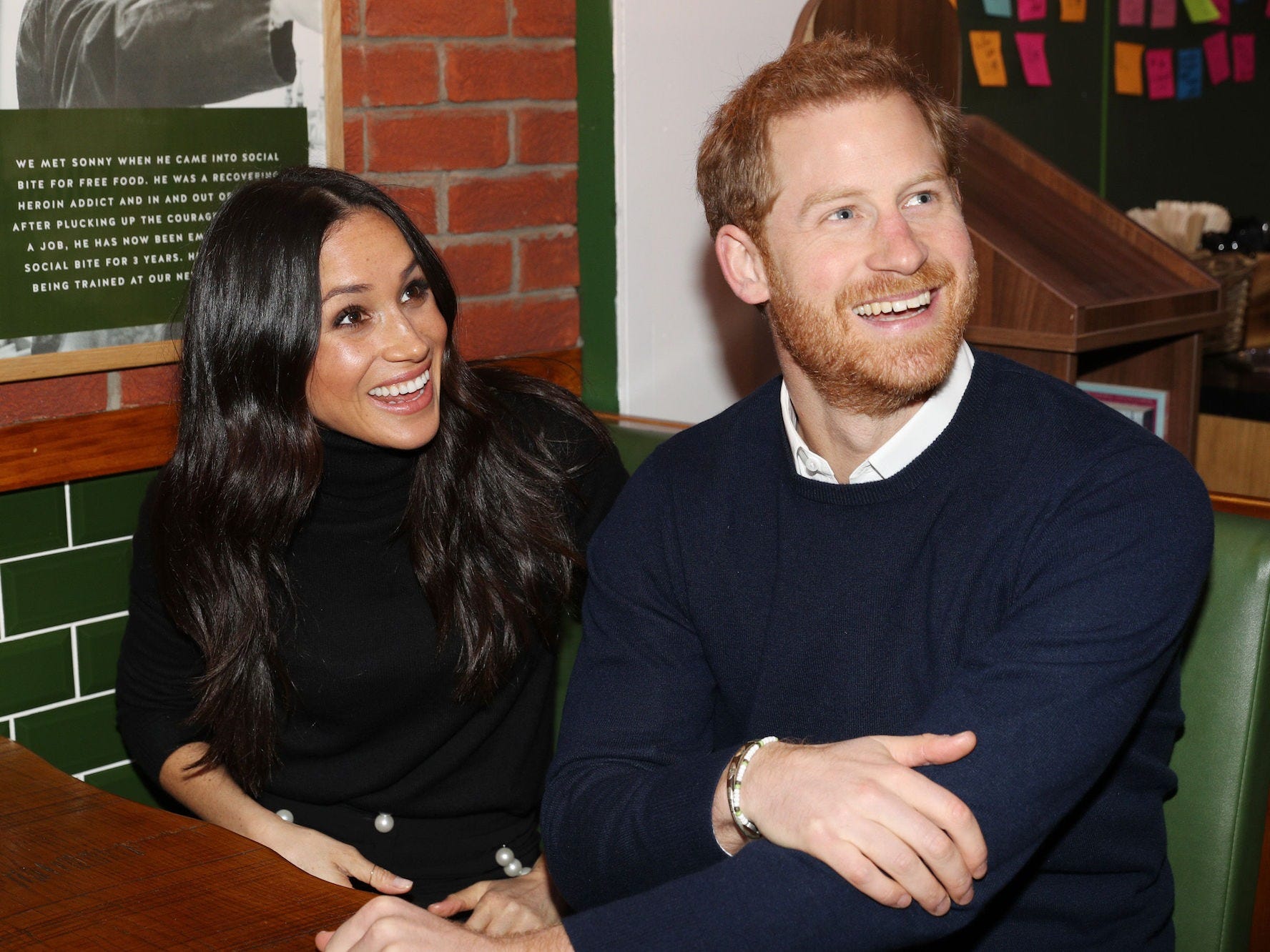 Coronavirus antibodies disappear in some patients. A huge Spanish study found that some people who tested positive for the virus tested negative for antibodies just weeks later, suggesting immunity is incomplete and herd immunity may be impossible.

Prince William and Prince Harry formally cut ties with Princess Diana’s Memorial Fund.Harry will put his half into a charity of his choice, while William’s half will go into a royal foundation.

13 things in your bathroom you should get rid of. Insider asked interior designers, who said dump the extra bathmats, soap bars on the sink, small mirrors, among other items.