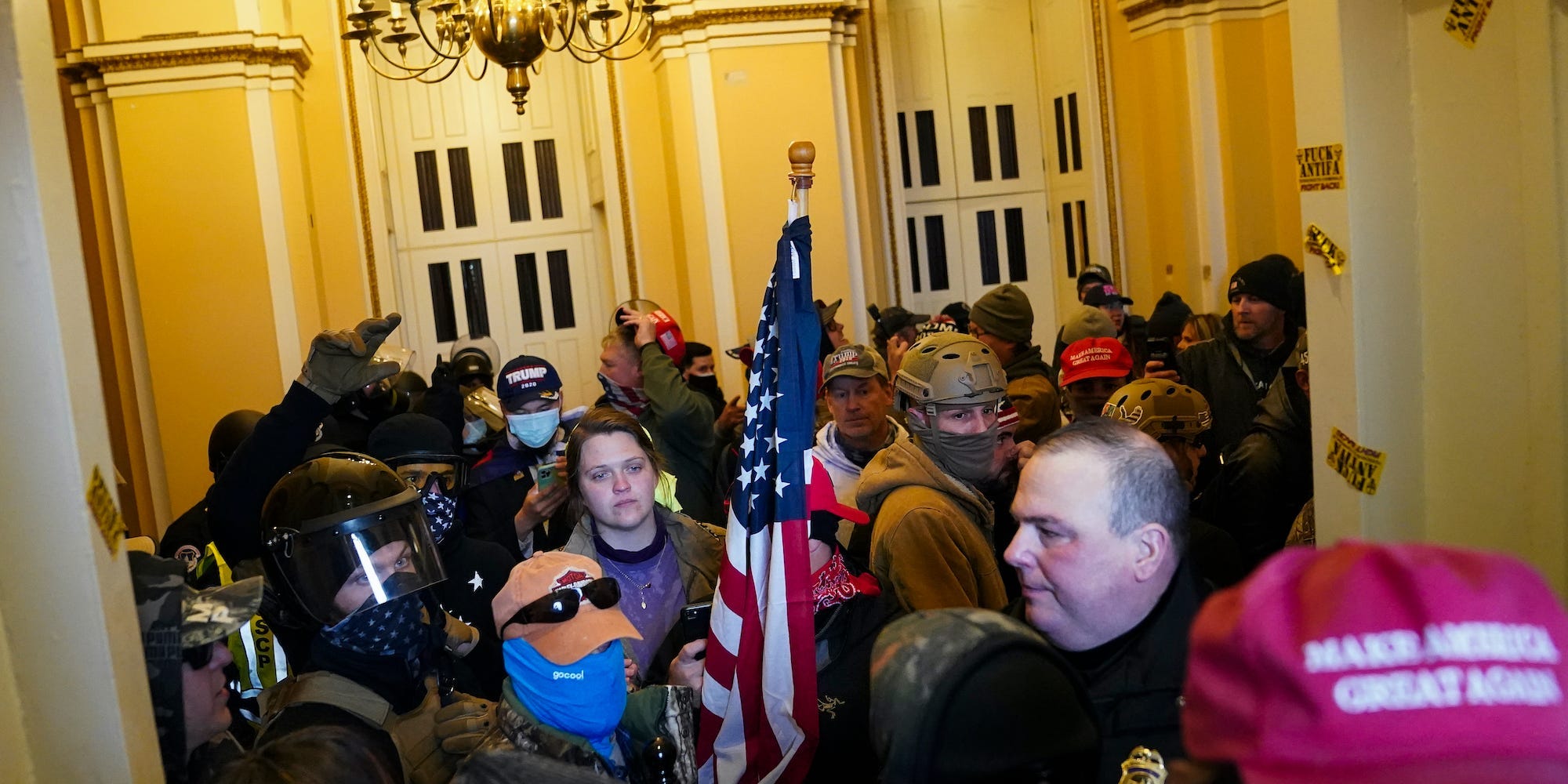 John Minchillo/APMembers of a pro-Trump mob breach the US Capitol building on January 6.

Ali Alexander, the organiser of the “Stop the Steal” movement, said three Republican representatives helped him plan the rally on January 6 that preceded the armed insurrection at the Capitol that left five people dead.

Alexander said Reps. Andy Biggs, Mo Brooks, and Paul Gosar helped him plan the rally, which happened as Congress was getting ready to certify the electoral votes and cement President-elect Joe Biden’s victory, The Washington Post reported on Wednesday.

“We four schemed up of putting maximum pressure on Congress while they were voting,” Alexander said in a Periscope video that has since been deleted, The Post reported.

According to The Post, he added that the plan was to “change the hearts and the minds of Republicans who were in that body, hearing our loud roar from outside.”

A spokeswoman for Gosar told Insider, “The Congressman has no comment at this time.”

“Congressman Biggs is not aware of hearing of or meeting Mr. Alexander at any point â€” let alone working with him to organise some part of a planned protest on January 6. He did not have any contact with protesters or rioters, nor did he ever encourage or foster the rally or protests on January 6,” Stefanski said.

Insider could not reach Brooks for comment, but his office told The Post that he “has no recollection of ever communicating in any way with whoever Ali Alexander is.” Another statement from his office said he did not know that the Capitol siege would occur after he spoke at the rally.

“Further, I spoke very early in the political rally. There was music, there was my speech, there was more music, then there was some number of speakers, then a couple hours or so later, President Trump began speaking,” Brooks said.

He added: “I ask this question, if my remarks were as inspirational as the Socialist Democrats and their Fake News Media allies want the public to believe, why didn’t the Trump rally participants, after my remarks, immediately get up and storm the Capitol?”

On January 6, supporters of President Donald Trump breached the Capitol and clashed with law enforcement, halting the joint session of Congress as lawmakers were debating challenges to electoral votes. Five people died, including a Capitol Police officer and a woman who was shot by law-enforcement officials.

On Wednesday, the House impeached Trump on a charge of “incitement of insurrection.”


Read more:
‘It was degrading’: Black Capitol custodial staff talk about what it felt like to clean up the mess left by violent pro-Trump white supremacists

Trump had made false and baseless accusations of voter fraud and assertions that Vice President Mike Pence, who oversaw the certification in the joint session of Congress, could “decertify” the votes and give him a second term.

Republicans including Biggs, Brooks, and Gosar have been accused of helping to perpetuate Trump’s false narrative.

The Daily Beast reported that Alexander, a felon who became more popular for supporting Trump’s voter-fraud claims, had been barred from Twitter after suggesting that Trump supporters would resort to violence on January 6 if the electoral votes were certified.

“We’re going to convince them to not certify the vote on January 6 by marching hundreds of thousands, if not millions of patriots, to sit their butts in DC and close that city down, right?” Alexander said during a rally in Arizona on December 19, according to The Daily Beast. “And if we have to explore options after that … ‘yet.’ Yet!”

Alexander participated in a rally the night before the certification and led a chant of “victory or death!”

On the morning of January 6, Gosar tagged Alexander in tweets calling for Biden to concede the election that he won by 7 million votes.

A representative for Biggs told CNN that he appeared in the video after a request from Gosar’s staff.

Alexander told The Post that he had “remained peaceful” and that his speeches had “mentioned peace” but were being misrepresented.

However, in a video after the siege, he said: “I don’t disavow this. I do not denounce this.”

Azmi Haroun contributed to this report.