A 'vigorous move' will push stocks another 5% to record highs before year-end — and it will be driven by sceptical investors who still have ample cash to deploy, Fundstrat's Tom Lee says

Despite the S&P 500 index knocking on the door of all-time highs, investors continue to show signs of disbelief and are not embracing the current market rally.

That’s according to Fundstrat’s Tom Lee, who said in an interview with CNBC’s Scott Wapner on Friday that stocks are set for a “vigorous move” higher thanks to investor scepticism and $US5 trillion sitting in cash.

“I’ve been surprised at how many people want to fade this [rally]. So many of our clients think that this is the level to get out of the markets,” Lee said.

It’s not difficult to understand why so many investors might be sceptics of the markets currently.


Read more:
A Wall Street investment chief says the relentless surge in big tech stocks is headed for an abrupt ending – and warns it could sink the entire market by 40%

According to LPL’s Senior Market Strategist Ryan Detrick, the S&P 500 just posted its best 100-day rally on record, having jumped 51% since March 23 despite an economic recession and tens of millions of Americans being unemployed.

But in reality, there are four big reasons that explain why the stock market can keep moving higher despite a weak underlying economy.

And rather than getting out of the market near record highs, Lee thinks new all-time highs in the S&P 500 would be “a sign of a renewed bull market.”

Lee raised his S&P 500 year-end price target to 3,525 from 3,450, according to the interview, representing 5% upside potential from current levels.

One group of stocks that will help drive further gains in the market are “epicentre” stocks, according to Lee, which are companies within sectors that have been hit hardest by the COVID-19 pandemic.


Read more:
Joe Biden officially accepts the Democratic nomination this week. RBC says buy these 47 stocks spanning every industry that are poised to crush the market if he wins in a wave election.

According to Lee, these beaten-down stocks have become lean, mean operating machines as they cut costs during the pandemic to stay afloat. Now, once a COVID-19 vaccine is made available to all, these stocks will have much operating leverage to work with as they see a sharp rebound in business.

On top of that, the epicentre stocks are underowned by most investors, as many instead favour technology and growth stocks.

Circling back to the negative scepticism, Lee highlighted a recent story of receiving an “angry email” from a client who said that the recent market calls by Lee represent a lapse in judgement.

Lee went on to say, “These are people I’ve known for 10, 15 years that are really sceptical of the S&P, so when you have scepticism at nearly $US5 trillion in cash, and even AAII reading showing retail sentiment is quite bearish, I think this move to all-time highs is going to create a scramble, and I think that’s why we get a vigorous move.”

And according to Detrick, there’s a good chance that Lee will be proven right.


Read more:
‘We are going to pay the price’: Famed investor Jim Rogers sounds the alarm on central bank money-printing and exorbitant debt – and warns the next market meltdown will be ‘the worst in my lifetime’

When stocks have historically printed 100-day gains of more than 22%, they were positive 78%, 83%, and 94% of the time in the ensuing three-months, six-months, and 12-months, respectively, according to Detrick. 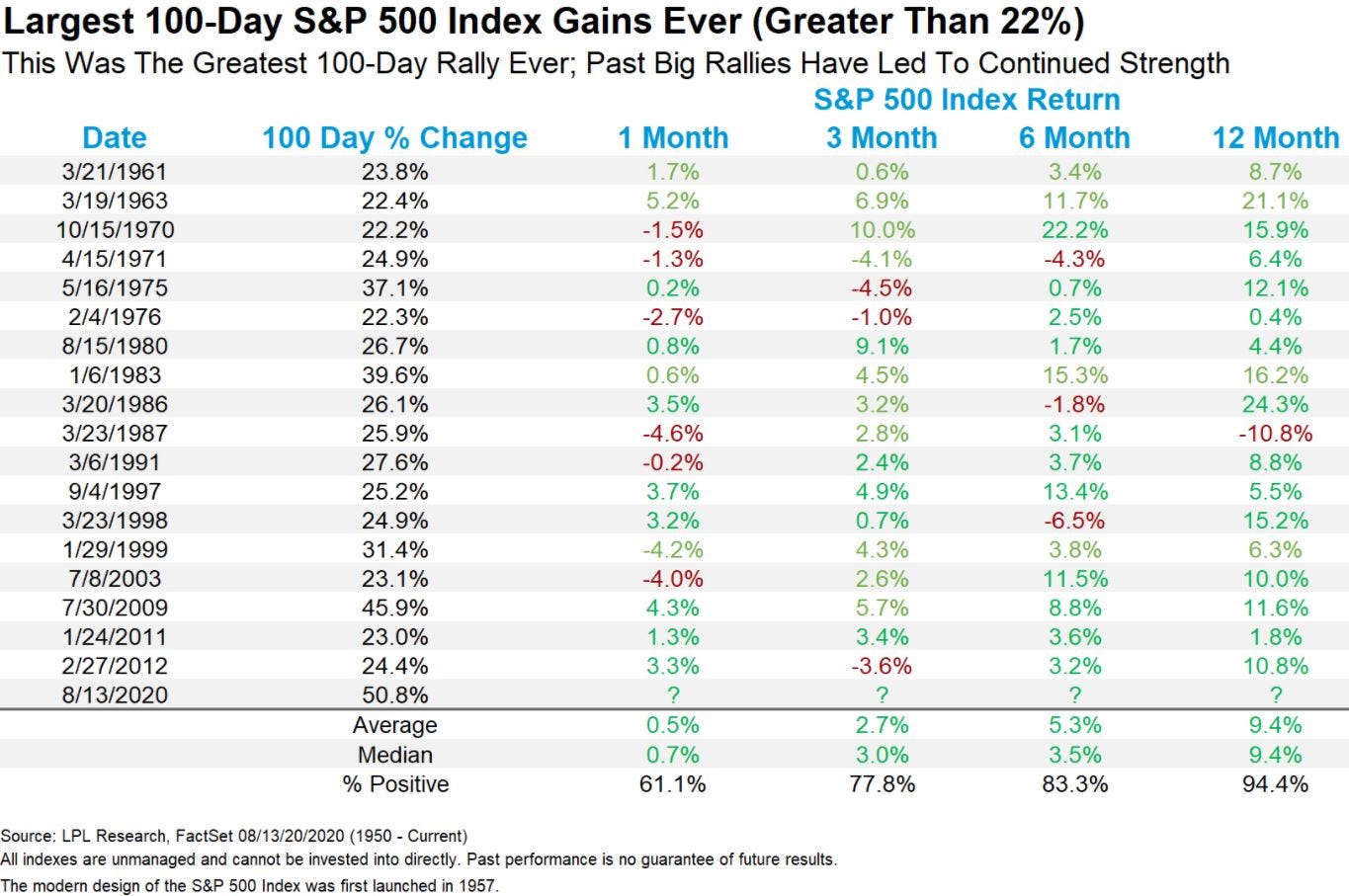