Those five stocks represent more than a fifth of the S&P 500 as measured by market value, and for good reason, according to Kostin. The tech giants posted strong growth amid a global pandemic and their underlying revenue streams remained durable as other businesses struggled.

And while valuations appear stretched for the mega-cap tech stocks, fast growth and low interest rates justify them, according to Kostin.

But there are three big risks that these tech stocks are facing over the next year, which could lead to limited upside ahead from current levels, Kostin said.

Tax reform plans from the Biden administration could dent profits and spur selling by investors, according to Kostin.

Biden has proposed raising to corporate tax rate to 28%, though has signaled that a compromise around the 25% level is possible. That tax hike could decrease 2022 earnings for the mega-cap tech group by 9% relative to analyst estimates, according to the note.

A higher capital gains tax rate in 2022 could also lead to weakness in the tech stocks, as some investors who are sitting on big gains might sell in 2021 to lock in the lower current tax rate.

“The FAAMG stocks have appreciated by $5 trillion during the last 5 years, accounting for 29% of the S&P 500 market cap increase during that time,” Kostin explained.

Low interest rates have supported the valuation of high growth, long duration stocks for more than a decade as investors have learned to cope with near-zero interest rates.

But the trend of near-zero interest rates could be nearing its end, based on expectations from strategists at Goldman Sachs. The bank expects the yield of the 10-year US Treasury will rise to 1.90% by the end of 2021, representing a cycle-high since the pandemic began.

“All five FAAMG stocks have above-average duration compared with the Russell 1000, meaning they are especially sensitive to moves in long-term interest rates,” Kostin explained.

This dynamic was on full display in late 2020 and earlier this year. When interest rates rose sharply from November through March, FAAMG stocks underperformed the S&P 500 by seven percentage points. 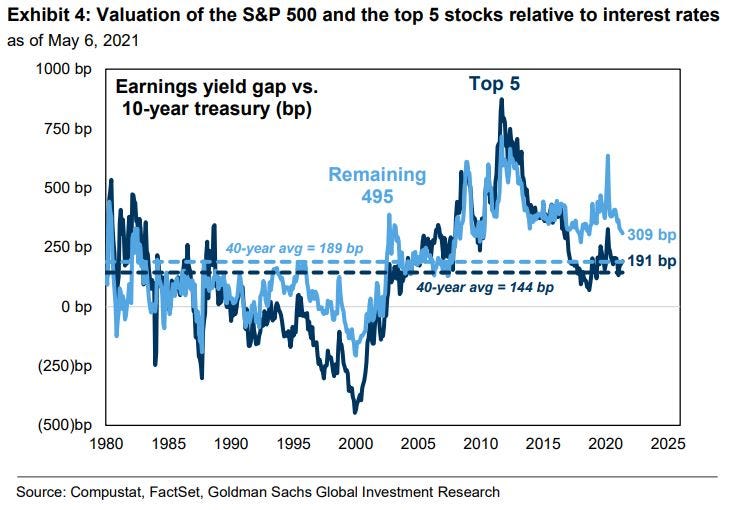 “Looking forward, the greatest fundamental risk to the continued market leadership of the five largest companies appears to be the potential intervention of regulators,” Kostin said.

Recent appointments made by the Biden administration suggest there is increased risk of a stricter regulatory regime for the FAAMG stocks, as they “face a laundry list of legal battles and investigations over their market power and competitive practices ranging from commercial litigation to DoJ and FTC antitrust lawsuits to Congressional probes,” the note said.

But investors don’t seem to be worried, as shares of Alphabet and Facebook are both higher since the announcement of higher scrutiny of their business practices.

Goldman said investors could be right, and that any antitrust actions have little to no major impact on the companies, but for now the uncertainty remains a big risk for the companies. 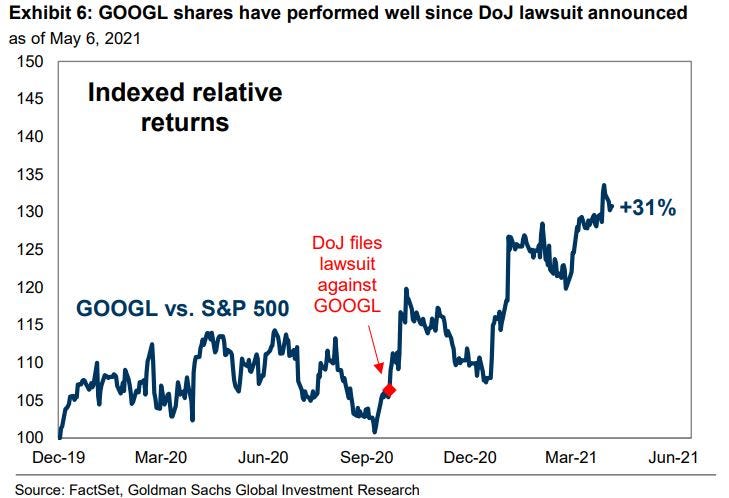