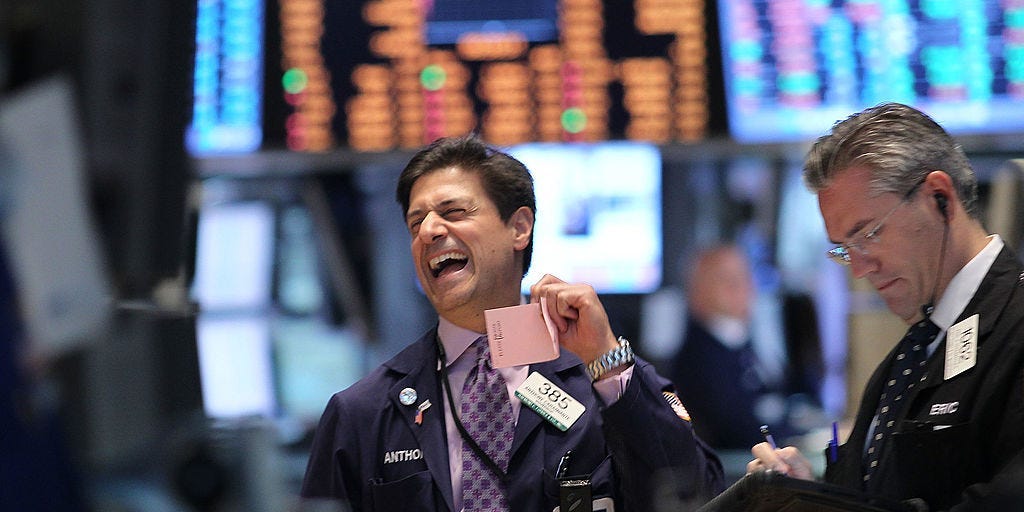 Spencer Platt/Getty ImagesTraders working on the floor of the New York Stock Exchange.
The value rotation continued on Wednesday as rising Treasury yields cut into bullishness around growth stocks.

The reading signals that the labor market is returning to growth after a nearly stagnant winter, but the weaker-than-expected data highlights how difficult it will be for the economy to recoup millions of lost jobs.

Treasury yields swung higher soon after the report’s release. The move revived concerns of overstretched stock valuations, leading tech stocks to drive the bulk of the market slump. The 10-year Treasury flirted with a key 1.5% level that it touched last week for the first time in over a year.

Energy and financial names outperformed through the session. Utilities and consumer-discretionary stocks joined the tech sector in leading indexes’ declines.

The broad decline followed weakness in Tuesday’s session. Similar valuation concerns dragged on growth stocks, though moves in the Treasury market weren’t as pronounced. The Nasdaq composite sank more than its peers, tumbling by 1.7% into the close.

ADP’s labor-market data overshadowed optimism about coronavirus vaccine availability in the US. President Joe Biden said on Tuesday afternoon that the US would have enough doses for every American by the end of May, pulling forward a key forecast by two months.

The rate of vaccination has neared 2 million doses per day on average, well above the pace of 1.3 million in the final week of February, according to Bloomberg data.

The House passed the president’s $US1.9 ($2) trillion stimulus proposal on Saturday, and Senate Majority Leader Chuck Schumer has said he plans to bring the bill to the Senate floor by midweek. Biden aims to sign the package into law before expanded unemployment benefits lapse in mid-March.

The package’s language isn’t finalized. Biden approved a faster phaseout of stimulus-check eligibility after moderate Senate Democrats called on the White House to prevent wealthier Americans from receiving payments. Individuals making more than $US80,000 ($102,623) and couples earning more than $US160,000 ($205,246) would not get a check under the new proposal.

Democrats are also haggling over the size of a new supplement to unemployment insurance. Moderate members of the party have called to shrink it to $US300 ($385) per week, while others have asserted that the full $US400 ($513) is needed to lift struggling Americans. The party needs all 50 votes in the Senate to pass the bill through budget reconciliation, making any last-minute changes risky.

Lyft rose after the company announced that it had its best week for ridership since the start of the pandemic. Wedbush analysts on Tuesday identified Lyft and Uber as top recovery plays.

Oscar Health tumbled after making its public-trading debut. The health-insurance company raised $US1.4 ($2) billion in its initial public offering at a valuation of $US9.5 ($12) billion.