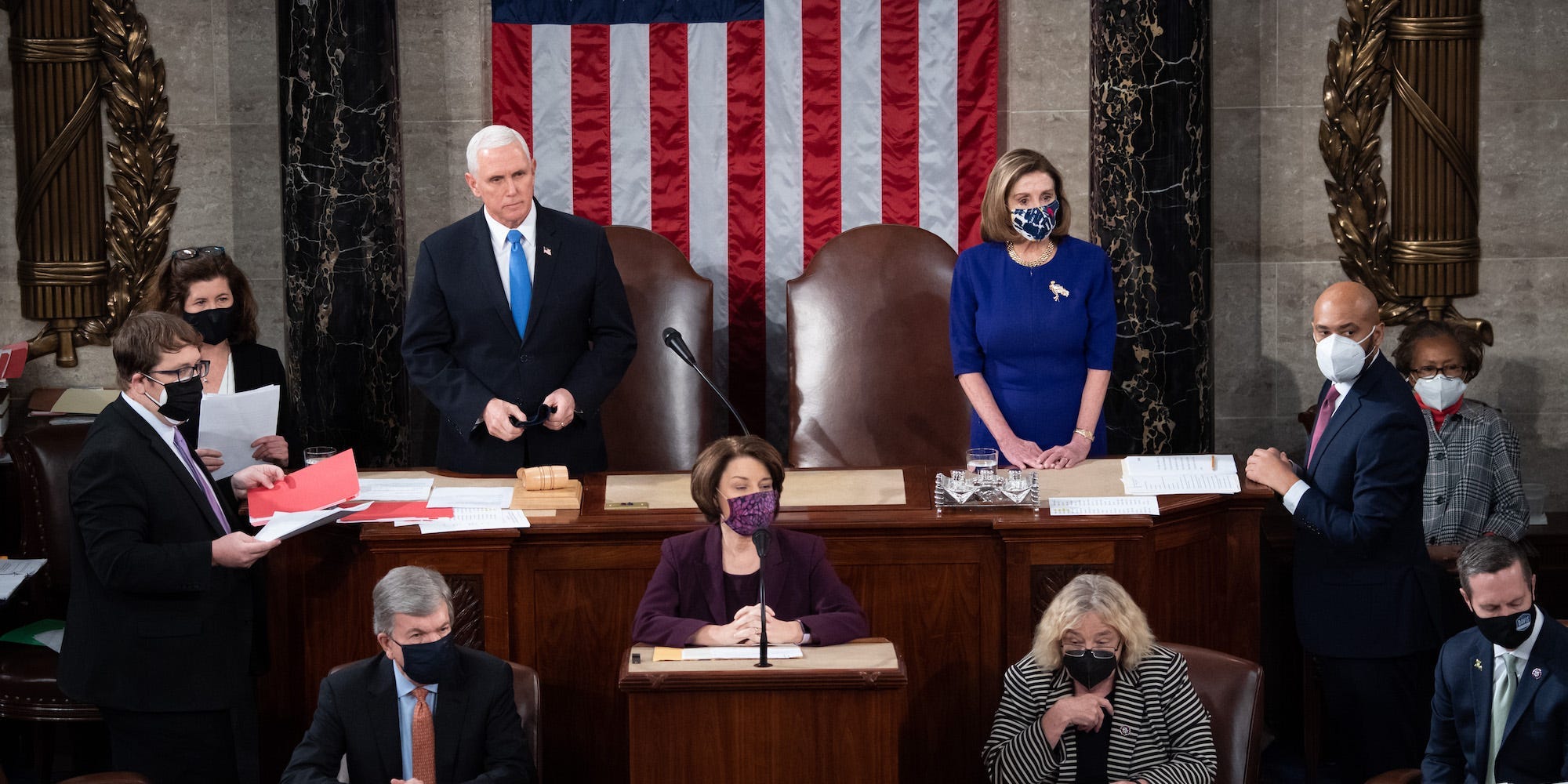 US equities gained on Thursday amid optimism around the confirmation of President-elect Joe Biden’s victory and renewed hopes for fresh fiscal stimulus.

A joint session of Congress confirmed Biden’s win early Thursday morning, hours after a violent mob of Trump supporters breached the Capitol. The insurrection delayed the certification process Wednesday afternoon as police officers were overwhelmed by the crowd egged on by the president.

Trump pledged to conduct a peaceful transition of power soon after the certification, deviating from previously steadfast claims that he won the election and would remain in the White House.

“Even though I totally disagree with the outcome of the election, and the facts bear me out, nevertheless there will be an orderly transition on January 20th,” the president said in a statement.

Here’s where US indexes stood shortly after the 9:30 a.m. ET open on Thursday:

While violence on Capitol Hill grabbed attention around the world, investors shifted their focus toward Georgia’s Senate runoff elections and increased chances of new fiscal relief. Jon Ossoff and Raphael Warnock’s victories pave the way for a Democrat-controlled Senate and more progressive economic policy in the wake of the coronavirus recession.

Democrats will likely use their powers to pass front-loaded stimulus, green energy initiatives, and infrastructure expansion, Joseph Song, US economist at Bank of America, said in a note to clients. Such policies provide upside risk to the bank’s GDP and inflation forecasts for the second half of 2021, he added.

On the economic data front, jobless claims in the US hovered at elevated levels as the labour-market crisis entered the new year. Filings for unemployment benefits totaled an unadjusted 787,000 for the week that ended Saturday, according to the Labour Department. The reading comes in just below the previous week’s revised total and snaps a two-week streak of declines. Economists surveyed by Bloomberg expected claims to reach 800,000.

Continuing claims, which track the aggregate total of Americans receiving unemployment benefits, declined to 5.1 million for the week that ended December 26. That came in below economist forecasts.


Read more:
Wall Street experts are calling Georgia’s runoff results ‘the first surprise of 2021.’ Here’s how 4 of them recommend positioning your portfolio for what could happen next.

Tesla climbed after RBC Capital analysts reversed from their previously bearish outlook and upgraded the stock.

Plug Power rallied after announcing a $US1.5 billion investment from SK Group, South Korea’s third-largest conglomerate. The partnership aims to build out hydrogen energy infrastructure in Asia, according to a Wednesday press release.

Bitcoin soared above $US38,000 as the cryptocurrency market’s total value surpassed $US1 trillion for the first time.

Gold dipped 0.6%, to $US1,908.98, at intraday lows. The US dollar strengthened against a basket of currencies and the yield on 10-year Treasurys climbed further above 1%.

Oil prices hovered amid a drop in US inventories. West Texas Intermediate crude fell as much as 0.5%, to $US50.39 per barrel, before paring losses.Brent crude, oil’s international benchmark, dipped 0.7%, to $US53.94 per barrel, at intraday lows.

Jim Callinan returned 83% to investors last year. Here are the 5 growth trends and 5 corresponding stocks the investing chief is watching in 2021 to position his portfolio for more explosive growth.


Tesla will rally another 10% to street-high price target of $US810 as deliveries continue to accelerate, Morgan Stanley says


US private-sector employment shrank in December for the first time in 8 months, ADP says