US stocks edge higher, on track for mild weekly gain as Netflix tumbles 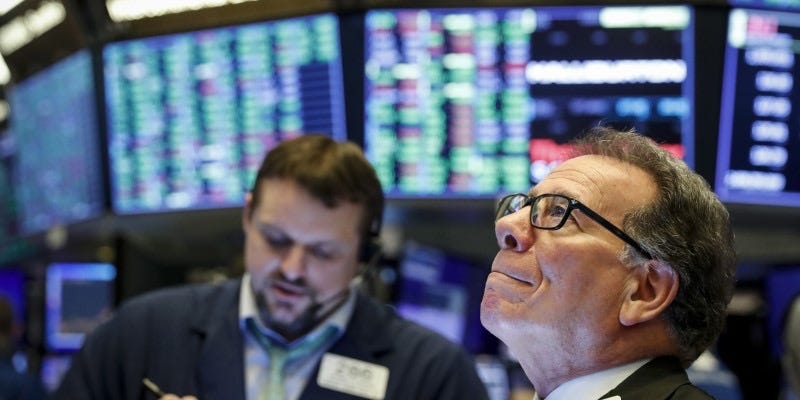 US equities gained slightly on Friday as investors looked past Netflix’s disappointing earnings report and retraced some of Thursday’s losses.

Netflix tumbled after its second-quarter profits and third-quarter guidance fell below expectations. Earnings per share of $US1.59 missed the $US1.81 estimate mostly due to a one-time tax-credit charge in California.

Here’s where US indexes stood shortly after the 9:30 p.m. ET market open on Friday:


Read more:
A Wall Street expert breaks down his precise 5-part strategy that could quadruple returns for investors buying the market’s smallest companies

Netflix’s lacklustre report set a gloomy tone for upcoming tech earnings and threatened to end the Nasdaq composite’s strong upswing. The index has largely outperformed its two peers through recent months as investors bet on tech giants to ride out looming coronavirus risks.

Amazon is set to report earnings next week, with Apple,Alphabet, and Facebook releasing figures at the end of the month.

Cruise stocks including Royal Caribbean, Carnival, and Norwegian Cruise Line slumped for the second straight day after the Centres for Disease Control and Prevention extended its no-sail order through September 30. The order was set to expire on July 24. The CDC cited “ongoing” COVID-19 hot spots aboard ships in its decision.

Oil futures fell slightly for the second day in a row. West Texas Intermediate crude fell as much as 1.1%, to $US40.29 per barrel. Brent crude, oil’s international standard, dropped 1.1% at intraday lows, to $US42.88.

Jobless claims hit 1.3 million in the week that ended on Saturday, the Labour Department announced on Thursday. Economists surveyed by Bloomberg had expected claims to fall to 1.25 million for the week. The reading was also the smallest decline since March, suggesting elevated claims data could last longer than first anticipated.