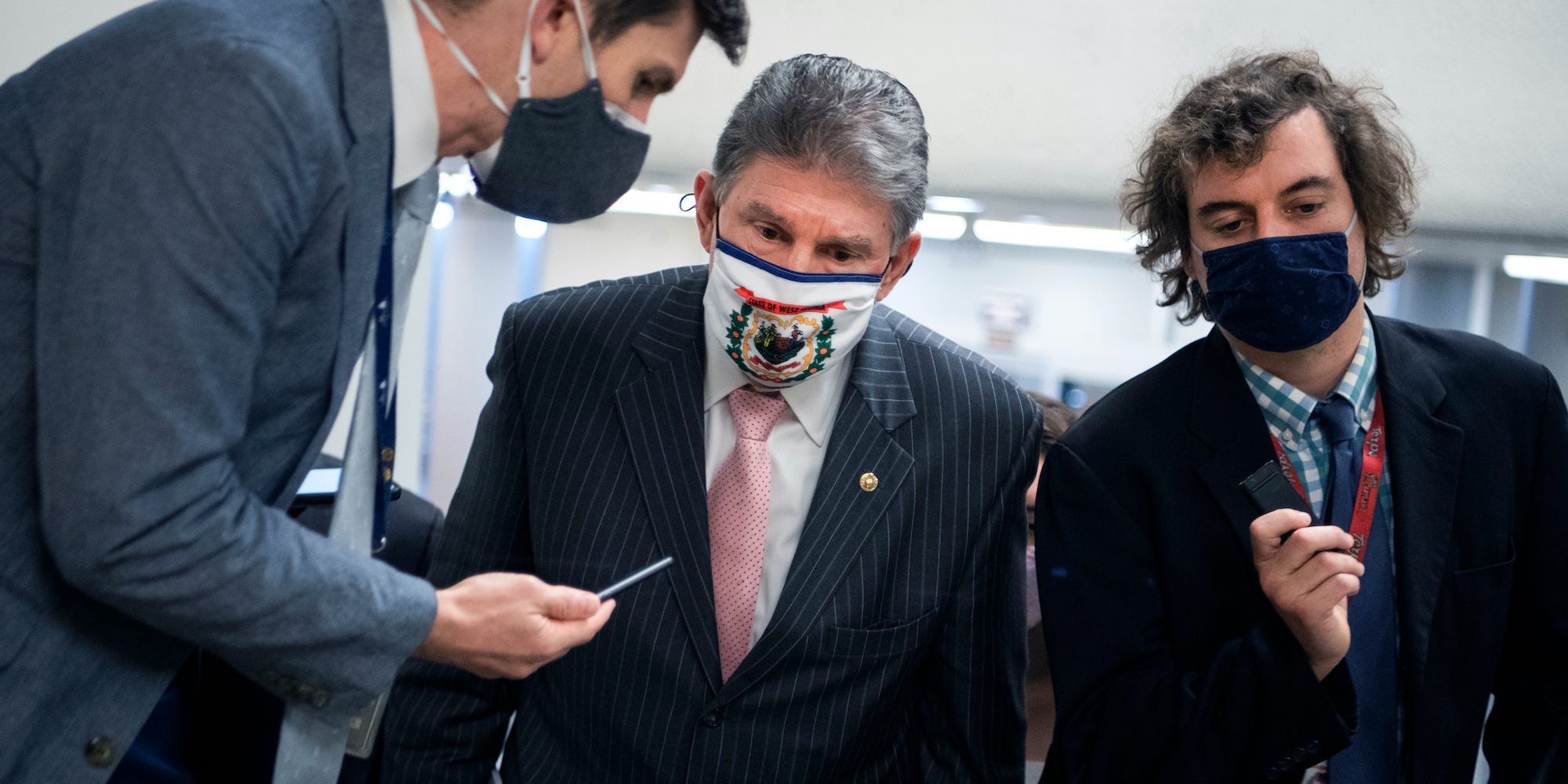 Photo By Tom Williams/CQ-Roll Call, Inc via Getty ImagesSen. Joe Manchin (D-WV) talks with reporters before a series of Senate votes known as vote-a-rama in the Capitol on February 4, 2021.

Senate Democrats are up against a narrow timeline to approve a $US1.9 ($2) trillion stimulus package and get it to President Joe Biden’s desk. But some Democratic senators are eyeing changes to key components of the legislation, particularly unemployment insurance and stimulus checks.

The jockeying among Democrats to amend provisions for direct aid comes as they attempt to enact the legislation by March 14, the deadline for when numerous unemployment measures expire, including a $US300 ($385) federal benefit. They have only days to settle policy differences, and the outcome may shape the course of the economic recovery.

Senate Majority Leader Chuck Schumer told reporters the measure could be advanced as early as Wednesday. Asked if he would support targeting some aspects of the bill, he responded: “We want to get the biggest, strongest, boldest bill that can pass. And that’s what we’re working to do.”

He said discussions were ongoing between the Biden administration and a group of nine moderate Democratic senators that includes Sen. Joe Manchin of West Virginia; Sen. Jeanne Shaheen of New Hampshire; Sen. Mark Warner of Virginia; and Sen. Dick Durbin of Illinois, the second-ranking Senate Democrat.

It’s not likely to get GOP support. Republicans are slamming the legislation as a Democratic wishlist of unrelated priorities.

“This is a wildly expensive proposal largely unrelated to the problem,” Senate Minority Leader Mitch McConnell told reporters on Tuesday. “We’ll be fighting this in every way that we can.”

Biden called into a Senate Democratic lunch on Tuesday and urged lawmakers to approve the bill quickly. Sen. Tim Kaine of Virginia told reporters that “he got on and kind of gave us a rally call.”

Democrats are employing a process known as reconciliation to push the rescue package through without Republicans. The legislation must comply with strict budgetary guidelines so it can pass with a simple majority of 51 votes in the Senate instead of the 60 usually required. Democrats cannot afford to lose a single vote.

Inside the group of nine

Manchin said Tuesday he supported a $US300 ($385) benefit that would expire sometime in the summer, appearing to suggest late June.

“I’m thinking by end of June, first of July we’re gonna have most people inoculated,” the West Virginia Democrat told reporters on Capitol Hill. “So by that time there should be doors opening up, ready to go.”

Then Shaheen indicated she favored designing a new pot of money for broadband and healthcare providers. “Those are two areas we’re really hoping to see additional funding,” she told reporters.

She said those initiatives could potentially be financed with a lower check income threshold for married couples and an extension of the federal jobless benefit at $US300 ($385) instead of $US400 ($513).

But the push to cut unemployment benefits encountered early Democratic resistance. “I oppose that. I don’t know if it will prevail, but I’m for $US400 ($513),” Durbin told reporters. Still, he said he was open to restructuring a third wave of direct payments.

The portion of the bill dealing with unemployment assistance appears far from settled. Sen. Ron Wyden of Oregon, chair of the Senate Finance Committee, said he believed there was “growing support” for unemployment benefits to end in September. “I think we’re making a lot of headway,” he told reporters, without specifying further.

Meanwhile, other Democrats pushed back against the idea of restricting stimulus check eligibility. “I think the president has made it clear what his views are and I believe those will prevail,” Sen. Bernie Sanders, chair of the Senate Budget Committee, told Insider.

The House approved the package on Saturday, giving Democrats only two weeks to approve the legislation in the Senate, and further adjustments are possible. A second vote-a-rama will occur sometime Thursday, kicking off a process of amendments put forward by Republicans aimed at inflicting political damage on Democrats.

Sanders says he will introduce a plan to gradually raise the minimum wage to $US15 ($19) an hour, days after the Senate parliamentarian ruled it was out of bounds for reconciliation. Regardless of the series of amendments,  the bill must go back to the House for final passage before Biden can sign it into law.