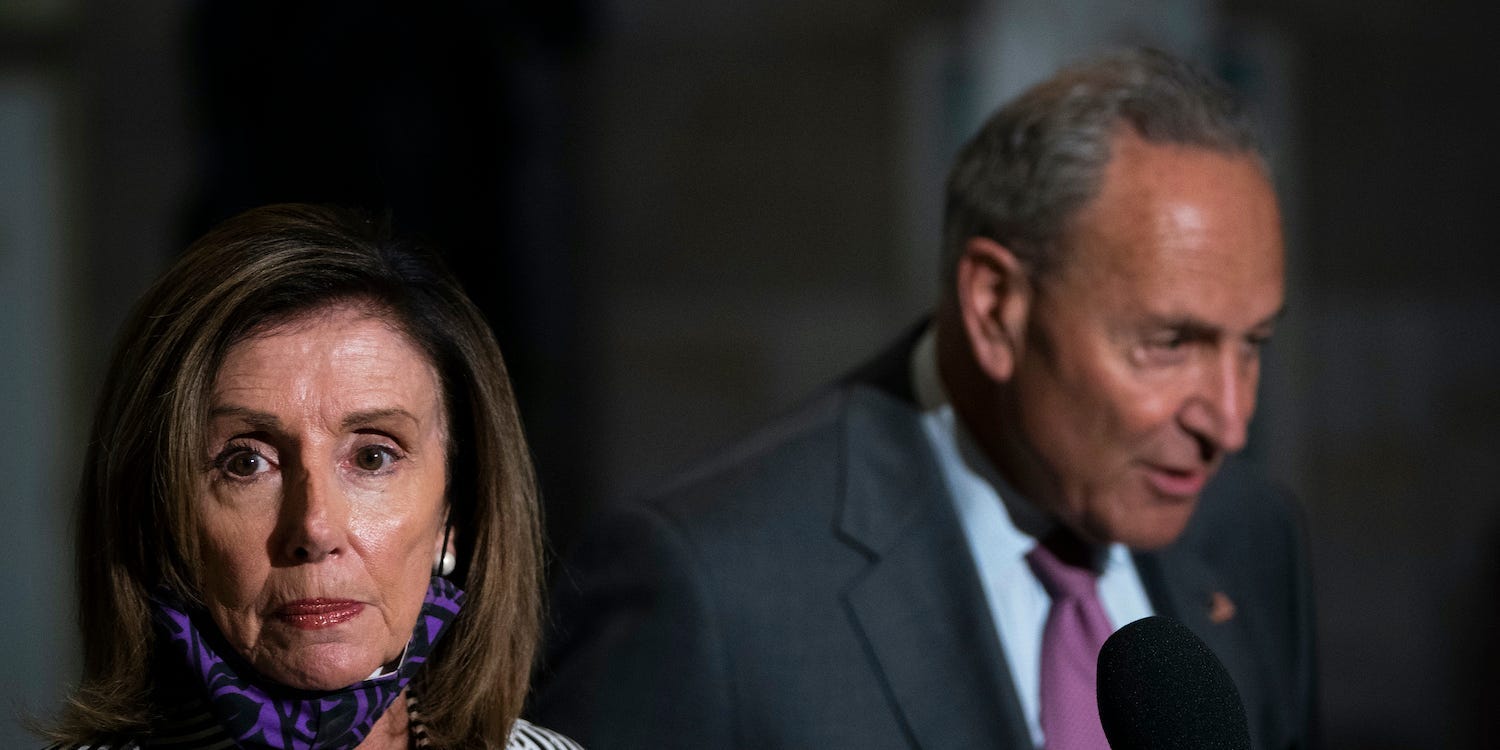 Democrats this week took the biggest step in months toward reaching a stimulus compromise, but the proposed deal lacks another round of $US1,200 direct payments for millions of Americans.

Congressional Democratic leaders embraced a $US908 billion stimulus package on Wednesday, saying the measure should serve as a new foundation for talks with Senate Majority Leader Mitch McConnell. The proposal â€” backed by a bipartisan group of lawmakers â€” includes $US180 billion for expanded unemployment benefits, $US160 billion for state and local government aid, and $US288 billion for small businesses and the Paycheck Protection Program.

Absent from the package is another wave of relief payments that economists and politicians say is critical for aiding the virus-slammed economy, and which drew the support of President Donald Trump in the run-up to the election.

The omission of the payments in the latest plan sparked criticism from some progressives including Democratic Rep. Rashida Tlaib of Michigan.

Americans used the $US1,200 payments included in the CARES Act largely for paying down debts and supporting savings through monthslong lockdowns, according to a Federal Reserve study.Many economists are urging Congress to authorise a fresh wave of stimulus checks to prevent the downturn from worsening.

“Unless policymakers act quickly to respond to the crisis at the scale necessary, we risk the damage to the economy lasting much longer than necessary, particularly for those at the bottom who have been hit the hardest,” the group of 127 economists said in a recent letter organised by the Economic Security Project.

The federal government sent nearly 160 million stimulus checks by early June as part of the $US2.2 trillion CARES Act passed in March. Individuals received up to $US1,200, while couples could claim up to $US2,400 and an additional $US500 for each dependent child under 17. Payments gradually decreased for incomes above $US75,000 per year for individuals and $US150,000 for couples.

Sending another round of payments to lower-income households would also have a significant effect in reviving economic growth, Jason Furman, the chair of the Council of Economic Advisers in the Obama administration, said in a recent Foreign Affairs column. Such households have a higher marginal propensity to consume, meaning new checks would have a “disproportionately positive impact on the overall economy,” Furman added.

The call for more direct payments isn’t concentrated only among Democrats. Republican Sen. Josh Hawley of Missouri said in a December 1 tweet that a new stimulus bill “needs to include direct payments to families and individuals in need.”

Still, many GOP senators have long balked at a second round of payments, saying they aren’t needed because the economy is in better shape compared with the spring.

McConnell appeared to dismiss the bipartisan proposal on Wednesday after rolling out a smaller measure. The $US553 billion package that the Kentucky Republican favours lacks funds for both stimulus checks and federal unemployment benefits.

Of the major proposals in front of legislators today, only House Democrats’ HEROES Act includes a second wave of direct payments. The $US2.2 trillion measure was passed by the House in early October but has since languished as Senate Republicans decline to back the bill. With months of negotiations garnering little new support for the HEROES Act, it’s unlikely the bill will be passed by the current Congress.


Read more:
The White House could still be crawling with the coronavirus on Inauguration Day. It’s a scenario that’s keeping Biden’s allies up at night.