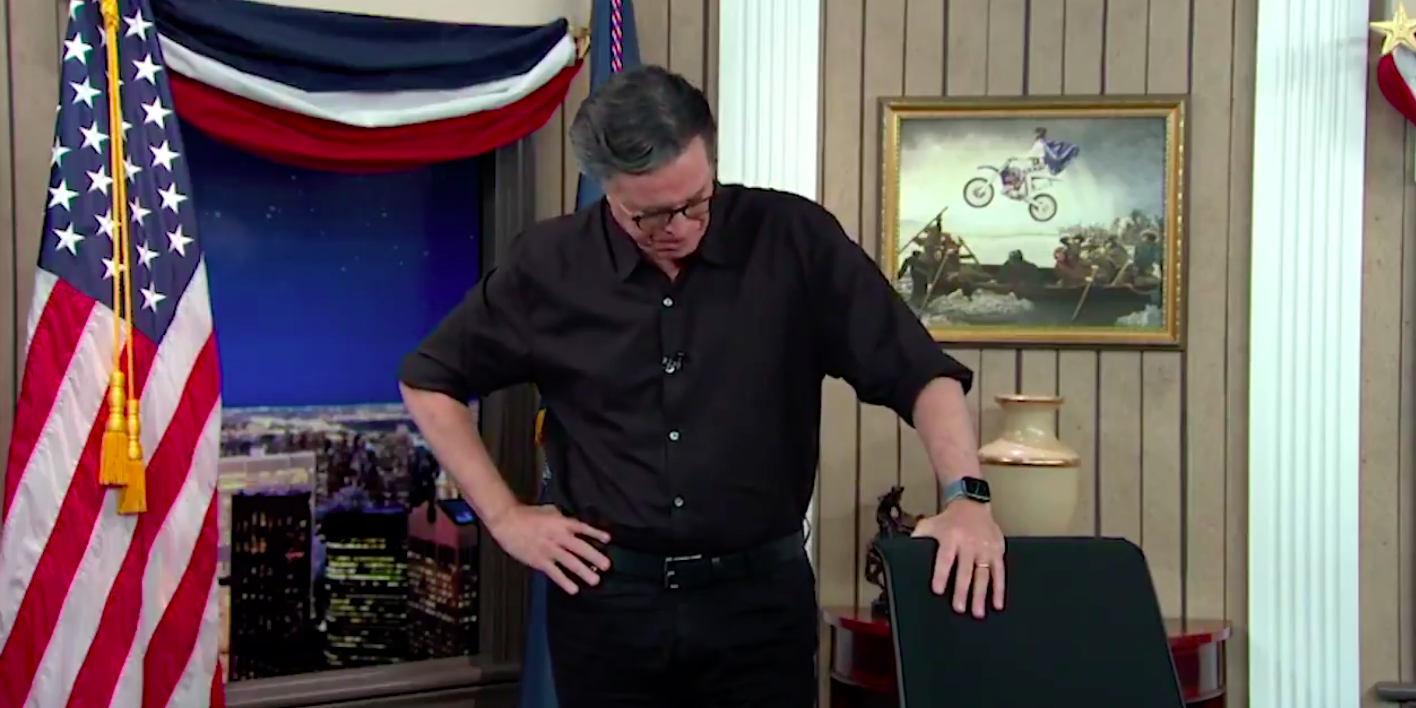 As it became increasingly likely that the Democrat Joe Biden would win the 2020 election â€” which had still not been called â€” Trump went on the offence, claiming he was cheated out of the election, complaining about polls, falsely declaring himself the winner, making unfounded allegations of voter and election fraud, and saying he won in states that he actually lost or that had not yet been called.

Colbert didn’t hold back in responding to Trump’s remarks. He said he wore black because he wanted to “wear something somber” to prepare for Trump’s efforts to discredit the results of a free and fair election. And Colbert added that he was standing instead of sitting down as he usually does because “Donald Trump tried really hard to kill something tonight.”

“The president came out into the White House briefing room and lied for 15 minutes,” he said. “Just nonsensical stuff about illegal vote dumps and corrupt election officials and secret Democratic counting cabals, and, I don’t know, long-form birth certificates, probably. It’s all the same. And if you did not know that Joe Biden was getting close to 270, Donald Trump just provided all the proof you will ever need.” Colbert was referring to the 270 electoral votes a US presidential candidate needs to win the Electoral College and therefore the election.

As of early Friday, Biden was projected to win 253 electoral votes, while Trump had secured 214, according to Decision Desk HQ.

Colbert went on to say Trump’s comments, dating back to his 2016 campaign, made it clear he would contest any election result in which he was not the winner.

“So we all knew he would do this,” he said before tearing up. “What I didn’t know is that it would hurt so much. I didn’t expect this to break my heart. For him to cast a dark shadow on our most sacred right from the briefing room in the White House â€” our house, not his â€” that is devastating.”

“He is the president of the United States,” he added. “That office means something, and that office should have some shred of decency.”

Colbert then focused his attention on Republican lawmakers and officials and demanded they denounce the president.

“Republicans have to speak up. All of them,” he said. “Because for evil to succeed, all that is necessary is for good men to do nothing. You only survived this up until now because a lot of voters didn’t want to believe everything that was obvious to so many of us, that Donald Trump is a fascist.”

Colbert continued, saying Republicans needed to “get off the Trump train” because “it’s not a passenger train, and he’ll load you on it sometime, too.”

The late night host went on to say, “We’re not going to show you a second of what that sad, frightened fraud said tonight. Because it’s poison and I like you.”

"If you did not know that Joe Biden was getting close to 270, Donald Trump just provided all the proof you will ever need." pic.twitter.com/urOeCrbzHr

Some Republican lawmakers have publicly spoken out against the president’s claims in the days since the election. Rep. Will Hurd of Texas wrote on Twitter that Trump’s comments were “dangerous & wrong” and that they undermined “the very foundation this nation was built upon.”

Sen. Pat Toomey of Pennsylvania said in a statement that once the battleground states’ ballots were “reached and certified, all parties involved must accept the outcome of the election regardless of whether they won or lost.”

“All votes that comply with Pennsylvania law must be counted, regardless of how long the process takes,” he added.

“We want every vote counted, yes every legal vote (of course),” he tweeted. “But, if you have legit concerns about fraud present EVIDENCE and take it to court. STOP Spreading debunked misinformation. This is getting insane.”

But other establishment Republicans either strongly backed Trump or didn’t weigh in on the controversy. Senate Majority Leader Mitch McConnell declined to comment. Sens. Ted Cruz of Texas and Lindsey Graham of South Carolina went to bat for the president.

“I am angry. The American people are right to be angry. We need observers. Now,” Cruz tweeted along with a clip of his appearance on the right-wing host Sean Hannity’s show, during which the Texas senator said state legislatures, the Justice Department, and the Supreme Court should intervene â€” essentially asking that they overturn the result of a democratic election despite no evidence of illegal activity or voter fraud.

Graham, meanwhile, told Hannity that “everything should be on the table” when the host asked him whether state legislators should appoint electors who would hand Pennsylvania to Trump even if Biden won the popular vote.