12 states that would suffer the most in a retail apocalypse LM Otero/APShoppers wear masks while walking at the Galleria Dallas mall in Texas on Monday, May 4, 2020.

Some states have started to ease stay-at-home orders and reopen retail stores to help restart the economy amid the novel coronavirus outbreak.

Although many states have started to reopen their economies, state budgets are still predicted to experience shortfalls. This is because sales and income taxes are the main two sources of state revenues and are plummeting because of the response to the pandemic, according to CNBC.

Retail sales saw a record monthly drop in March at 8.7%, which will affect state budgets, according to Poynter. Based on figures from the Tax Policy Centre, Poynter estimated that the average revenue from general sales taxes is about 23% of total state revenue. About two-thirds of the nation’s total state sales taxes come just from retail.

“Historically, sales taxes have been more stable during economic crises, but with closures and people largely remaining in their homes, consumption has plummeted,” Jared Walczak, director of State Tax Policy at the Tax Foundation, told Business Insider.

Walczak said when a state will reopen depends on many factors, not just a state’s reliance on sales taxes, and “any major tax will take a beating right now.”

According to Centre on Budget and Policy Priorities figures reported by CNBC, states are projected to have a $US105 billion budget shortfall for fiscal year 2020 and a record deficit of $US290 billion for fiscal year 2021. Additionally, according to a recent Bank of America Global Research report, states and local governments will need $US150 billion to $US300 billion in federal assistance and have requested $US750 billion.

To see which states could be most devastated by a decline in retail sales and consumer demand amid the coronavirus, Business Insider looked at which states have the highest share of sales taxes as part of their total tax revenues. We used fourth quarter 2019 figures from the US Census Bureau’s Quarterly Summary of State and Local Government Tax Revenue.

Washington had the highest share at 66%. Tennessee followed closely behind Washington at 63%, and the state has already reopened its retail sector in many counties according to The New York Times.

The following chart shows the 12 states that most heavily rely on sales taxes based on fourth quarter 2019 tax figures: 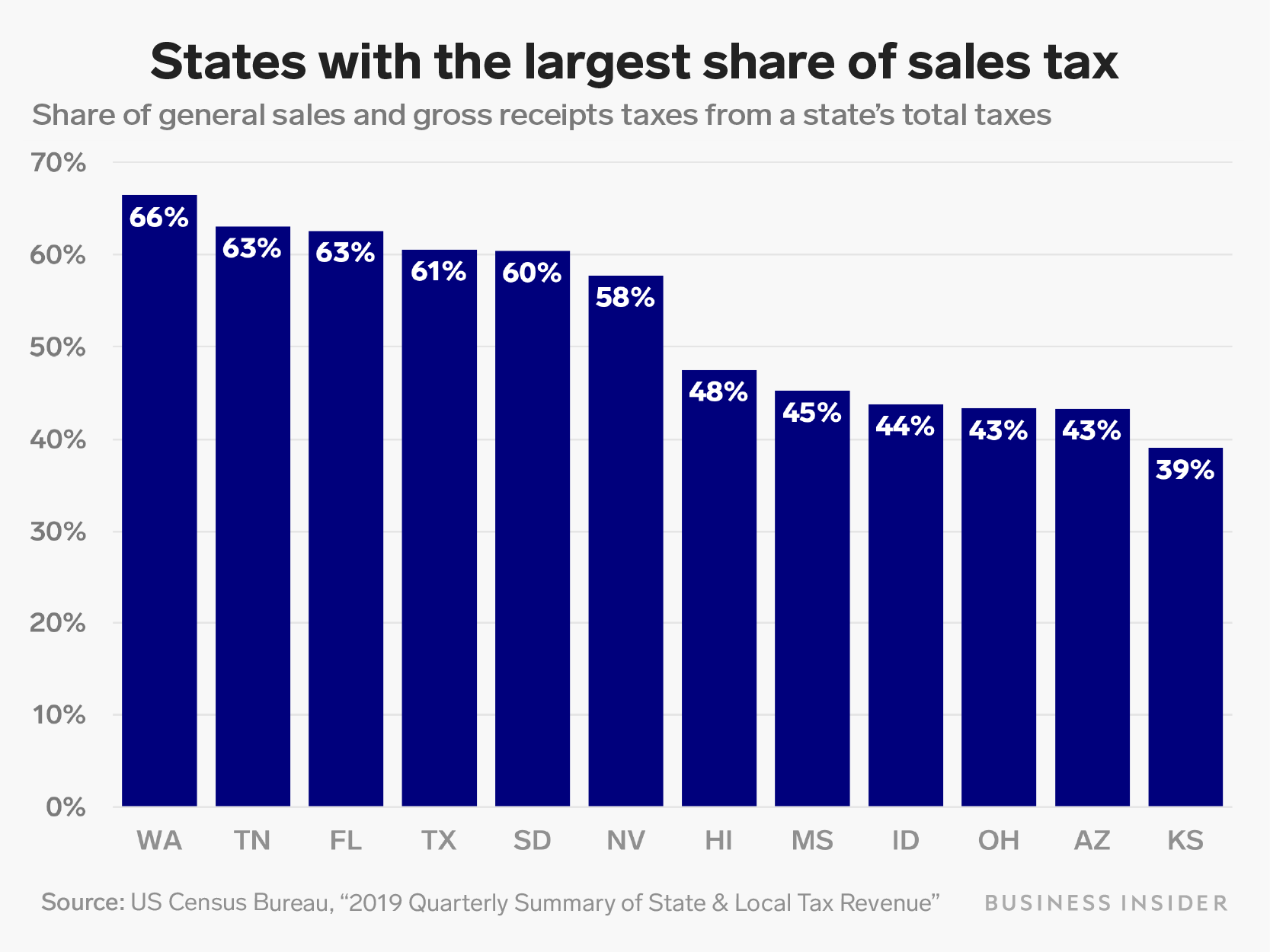