Starbucks' new summer menu is filled with colourful drinks made with coconut milk, kiwi, and guava. Here's what they all taste like. 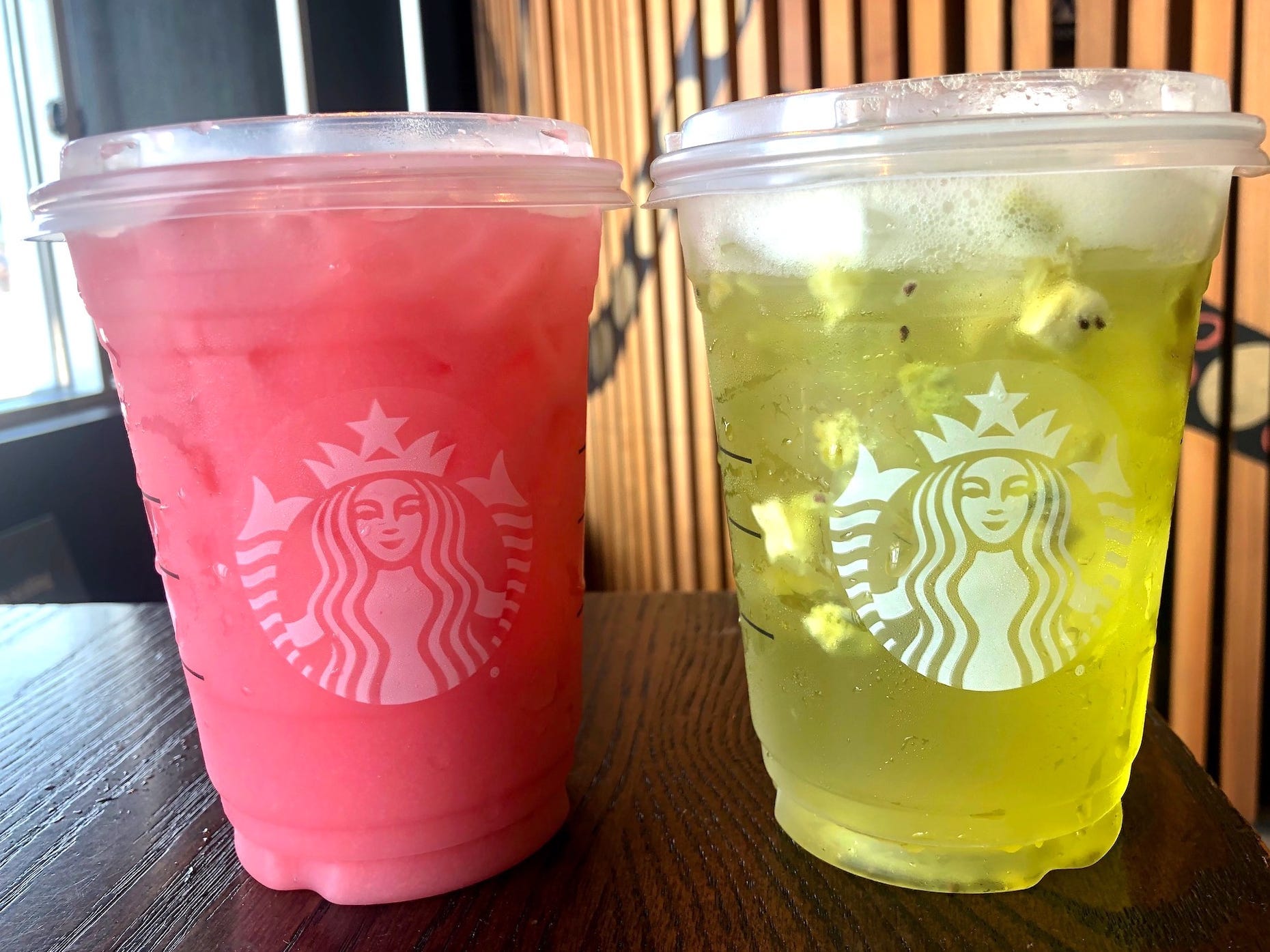 The end of summer may be on the horizon, but Starbucks is hoping to extend the season a little longer with the help of a few new beverages.

Kiwi is the star of the show at the coffee chain this month, with Starbucks releasing two bright and colourful drinks to keep you cool while the weather’s still hot.

Since I was a huge fan of Starbucks’ spring drinks, I decided to test out the new Star Drink and Kiwi Starfruit Starbucks Refreshers, as well as the Iced Guava Passionfruit Drink – which also recently joined the company’s permanent menu.

Here’s what I thought about the three new drinks, which brought to mind everything from cotton candy and melted Jolly Ranchers to a subtle, milky tea.

Before I get into my review, let me tell you why coconut milk is having a moment on Starbucks’ menu. 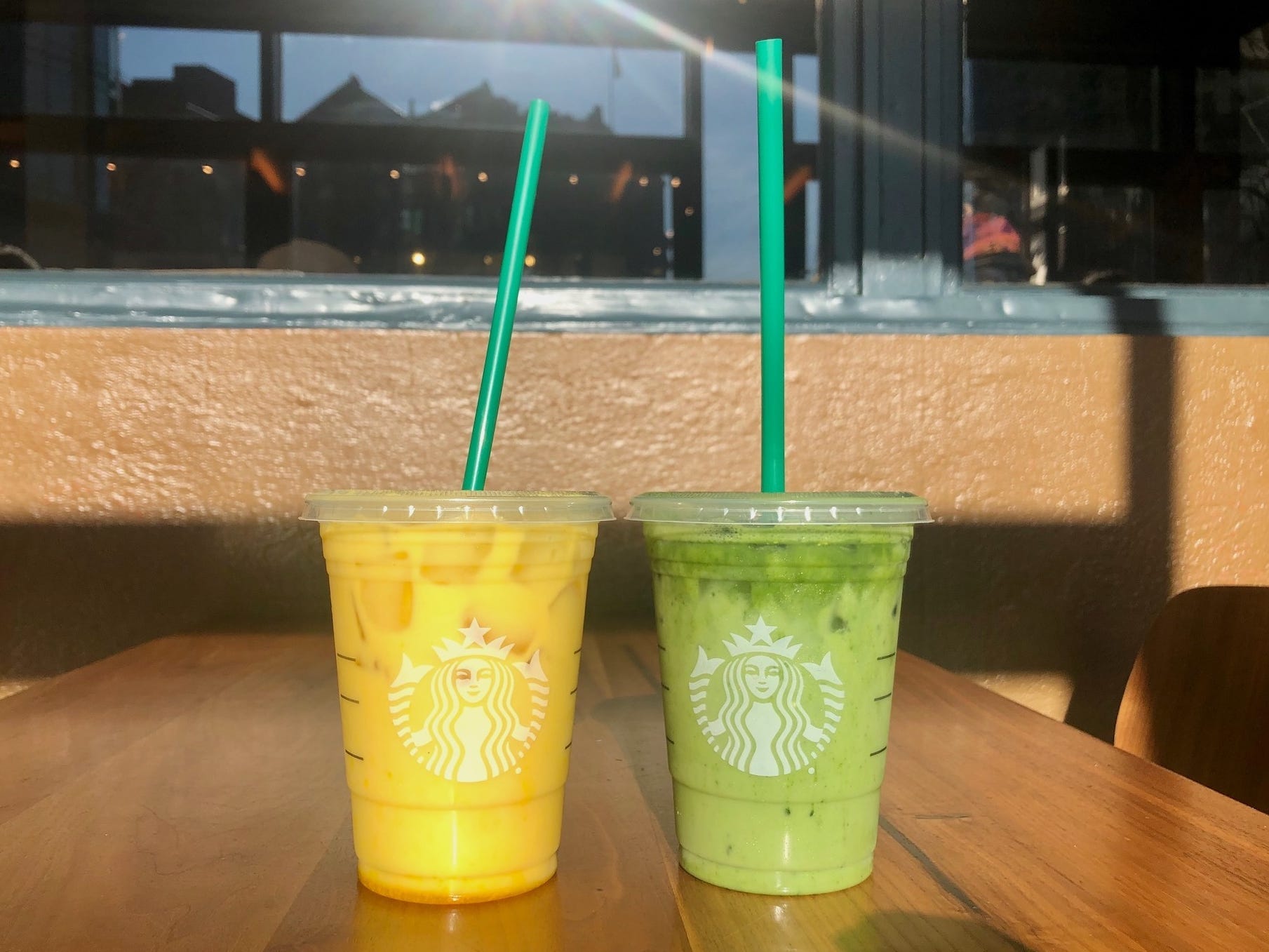 The Star Drink and Iced Guava Passionfruit Drink are both made with coconut milk, adding to Starbucks’ growing selection of non-dairy alternatives.

A Starbucks spokesman told me back in March that the company has seen an increase in demand for more non-dairy beverages, so creating new drinks with coconut milk was a natural decision.

Starbucks released the Coconutmilk Latte back in January (along with the Almondmilk Honey Flat White), and launched its Iced Pineapple Matcha Drink and Iced Golden Ginger drink two months later.

I’ve loved all of Starbucks’ coconut milk offerings and actually order the Coconutmilk Latte quite regularly, so I was excited to hear that the company was releasing even more non-dairy options. 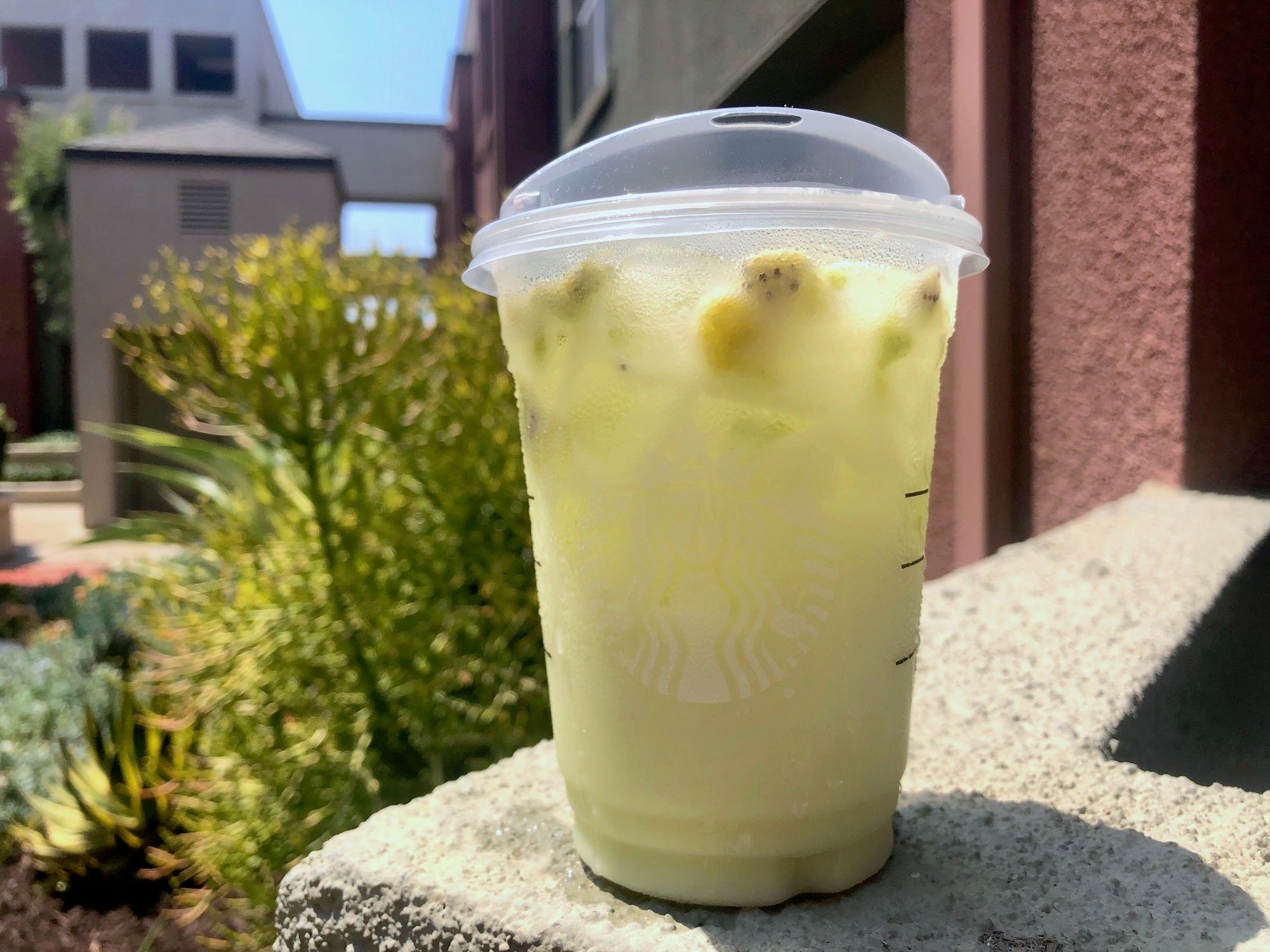 While the Star Drink is nowhere near as bright at Starbucks’ Iced Pineapple Matcha or Kiwi Starfruit Starbucks Refreshers, I liked its pretty pale-green colour. I could see dozens of little kiwi chunks floating toward the top with the ice, and the drink’s consistency looked almost creamy.

My roommate Joe, who helped me test out the drinks, said the cup reminded him of a milky tea.

As I took my first sip, I realised that the Star Drink tasted quite like a milky tea as well. 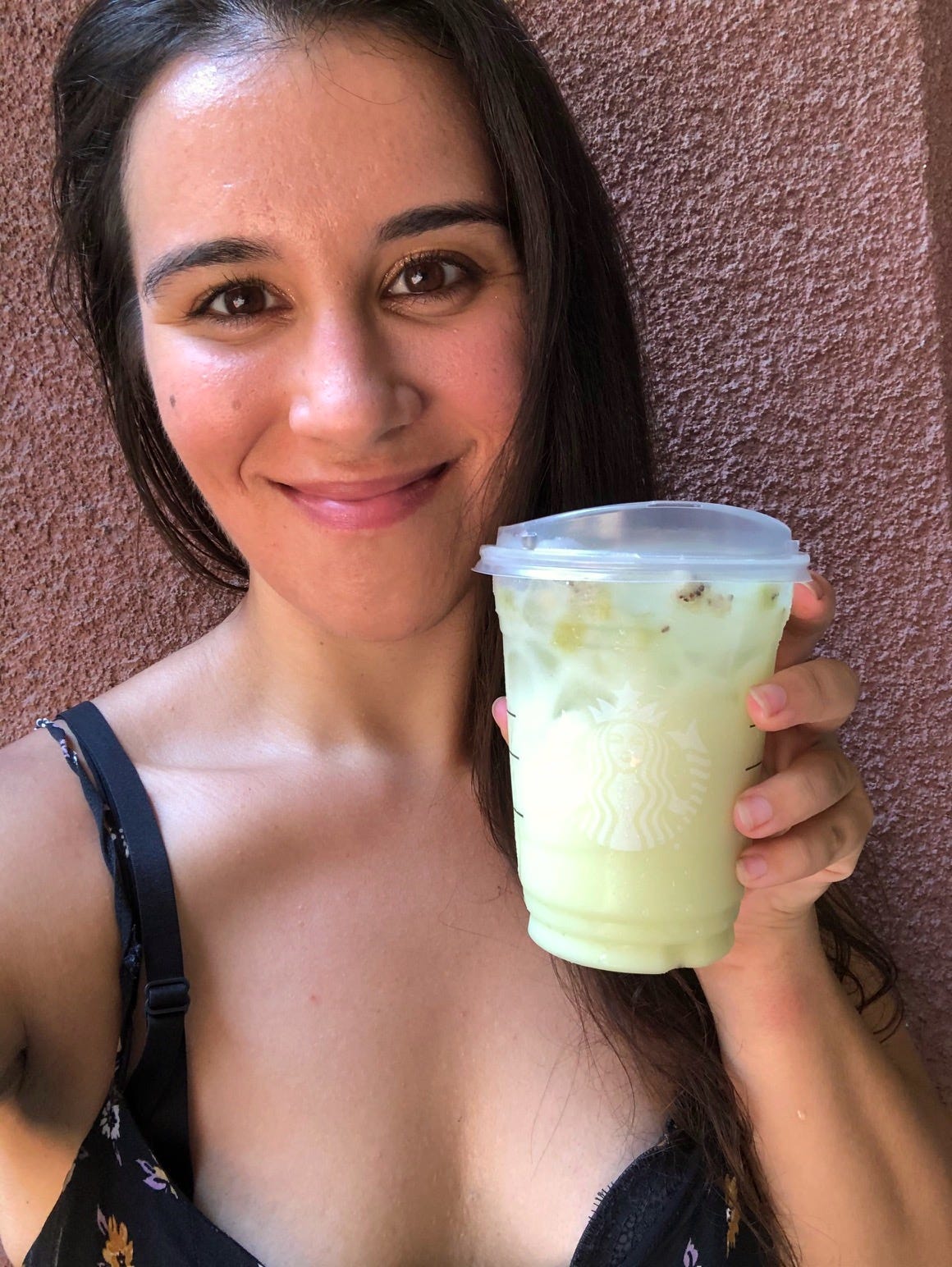 Anneta Konstantinides/InsiderThe Star Drink reminded me of a milky tea.

Of Starbucks’ three new beverages, the Star Drink is easily the most subtle when it comes to flavour.

There’s just a hint of sweetness with each sip, and I would soon discover just how much work the coconut milk does to tamper down the taste of the star fruit juice.

Both Joe and I loved the addition of the real kiwi chunks, which added a little more depth and oomph to the refreshing flavour.

I did notice, though, that the drink started tasting watery as the minutes began to pass. Next time, I’d either skip the ice or sip it fast.

Next up was the Iced Guava Passionfruit Drink. 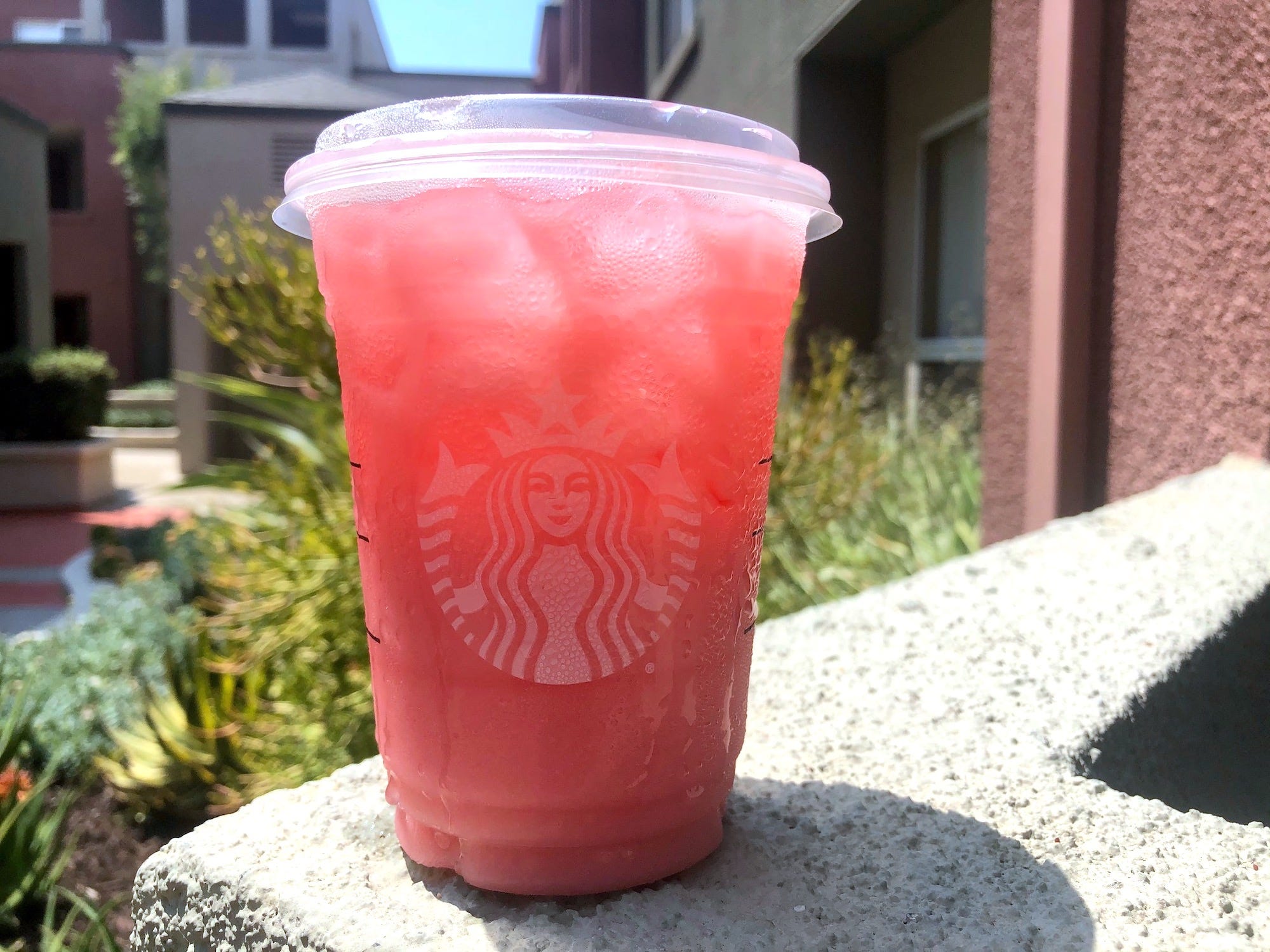 The Iced Guava Passionfruit Drink combines the flavours of guava, passion fruit, pineapple, and ginger and is hand-shaken with coconut milk and ice.

I loved how bright and pink the drink looked when I picked it up at my local Starbucks. The colour was so inviting, somehow reminding me both of cotton candy and Ina Garten’s favourite cosmo.

The drink also had a sweet and promising scent, one that was definitely reminiscent of fresh guava. My hopes were high and I hadn’t even had my first sip.

The Iced Guava Passionfruit is definitely the sweetest of the three new drinks. 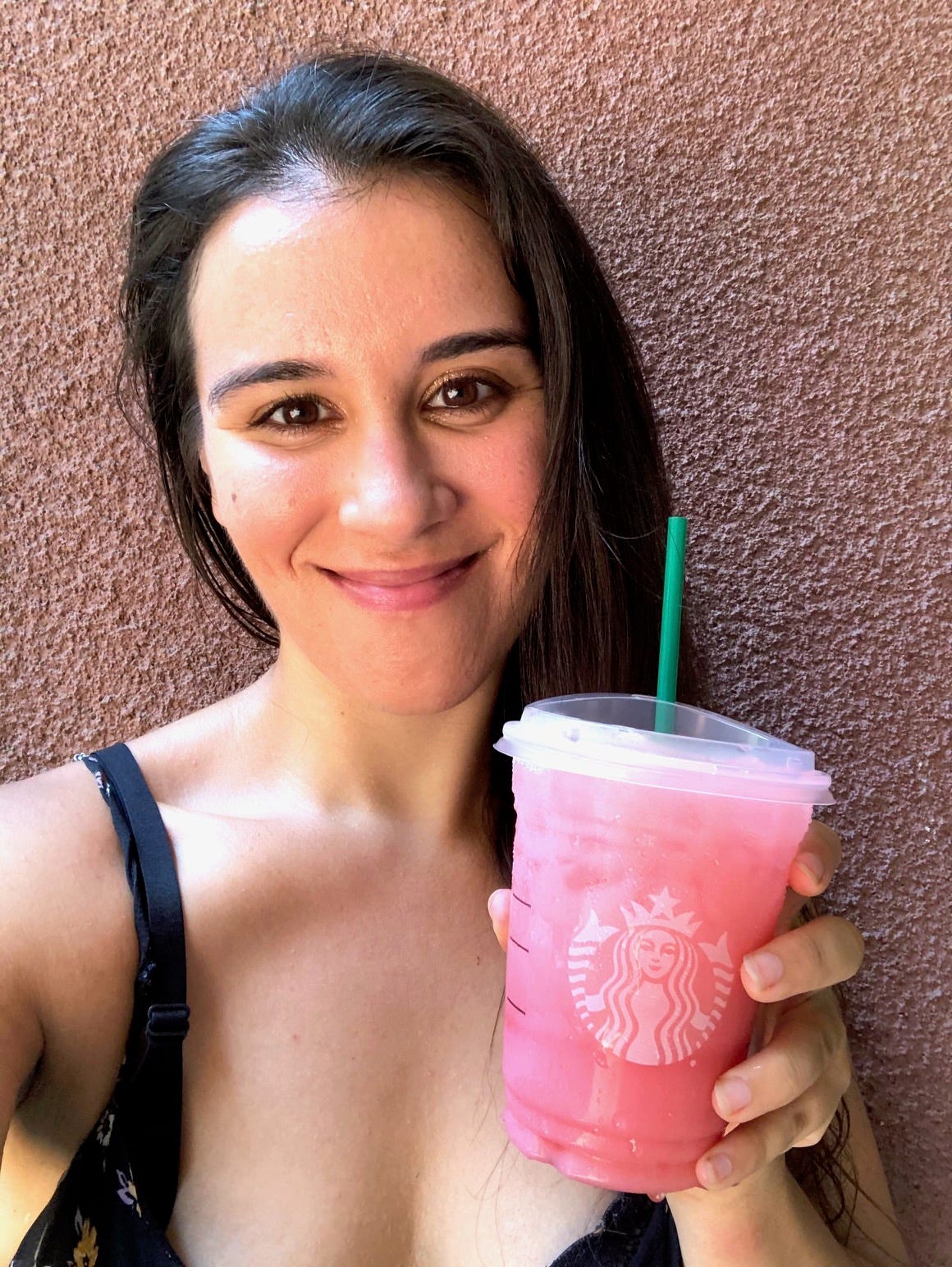 Anneta Konstantinides/InsiderThe Iced Guava Passionfruit Drink was my favourite of the three.

It was 86 degrees Fahrenheit in Los Angeles when I tested this drink, and it was exactly what I needed. The guava, passion fruit, and pineapple all work really well together, creating a super refreshing drink packed with flavour that was sweet without being overpowering.

And while the consistency looks quite creamy, I was surprised to find that the drink tasted much lighter than I had expected at first glance. Joe and I both agreed that this would also be a great base for a cocktail, especially one with some tequila.

Then it was time to try the Kiwi Starfruit Starbucks Refreshers, which is essentially the Star Drink without any coconut milk. 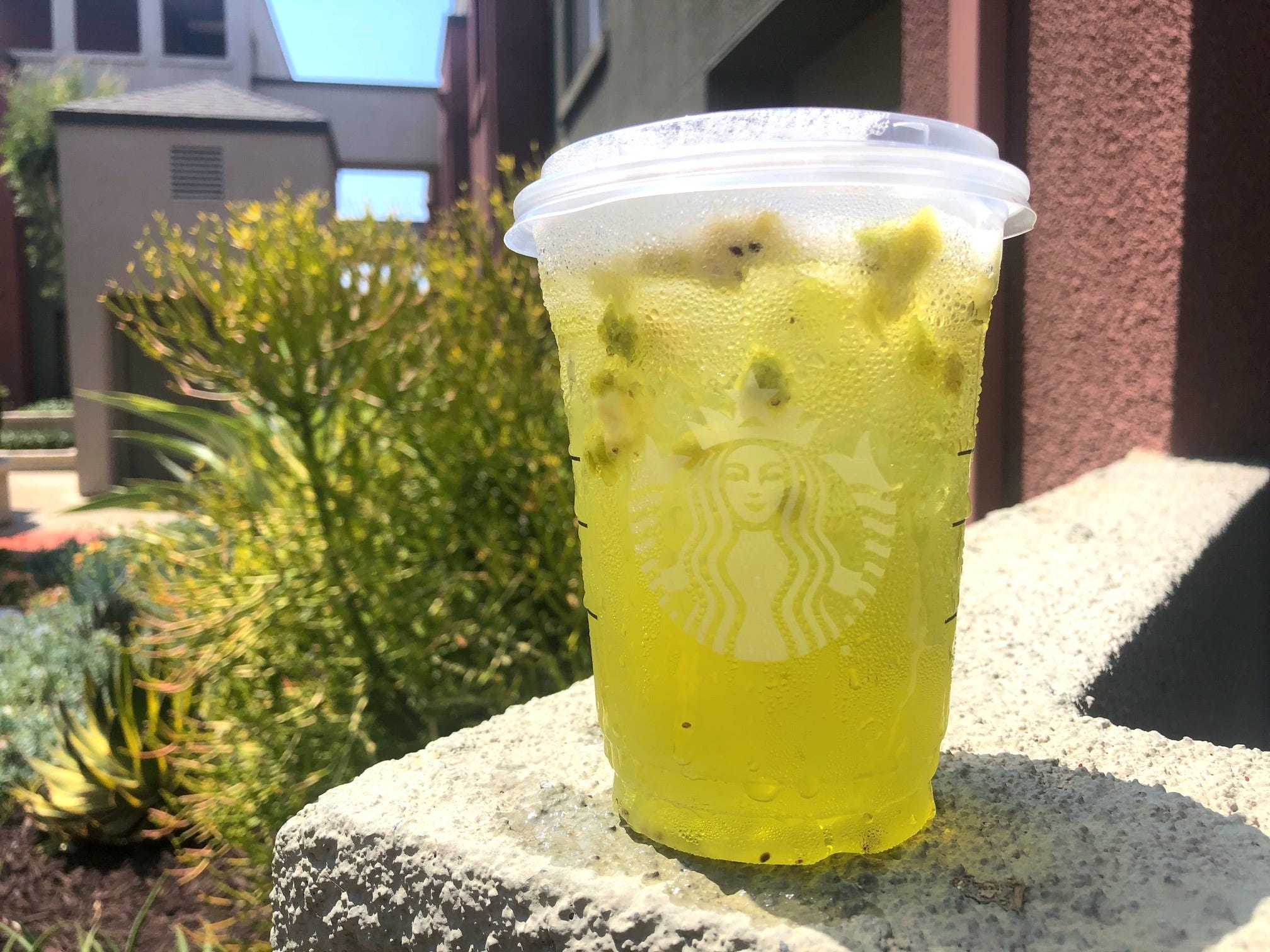 While there’s only one different ingredient between the two drinks, they look vastly different.

The Kiwi Starfruit Starbucks Refreshers has an almost neon-green hue, with little chunks of kiwi floating throughout the cup.

“It’s so green,” Joe told me when he saw the drink. “It looks radioactive.”

When I took off the cap to get a whiff, I was surprised to find that it smelled almost artificial. While the Star Drink had been subtle in scent and taste, I had a feeling that the Kiwi Starfruit Starbucks Refreshers was going to be a far different experience.

While the Star Drink is subtle and the Iced Guava Passionfruit is delightfully sweet, the Kiwi Starfruit Starbucks Refreshers tastes a bit too much like candy. 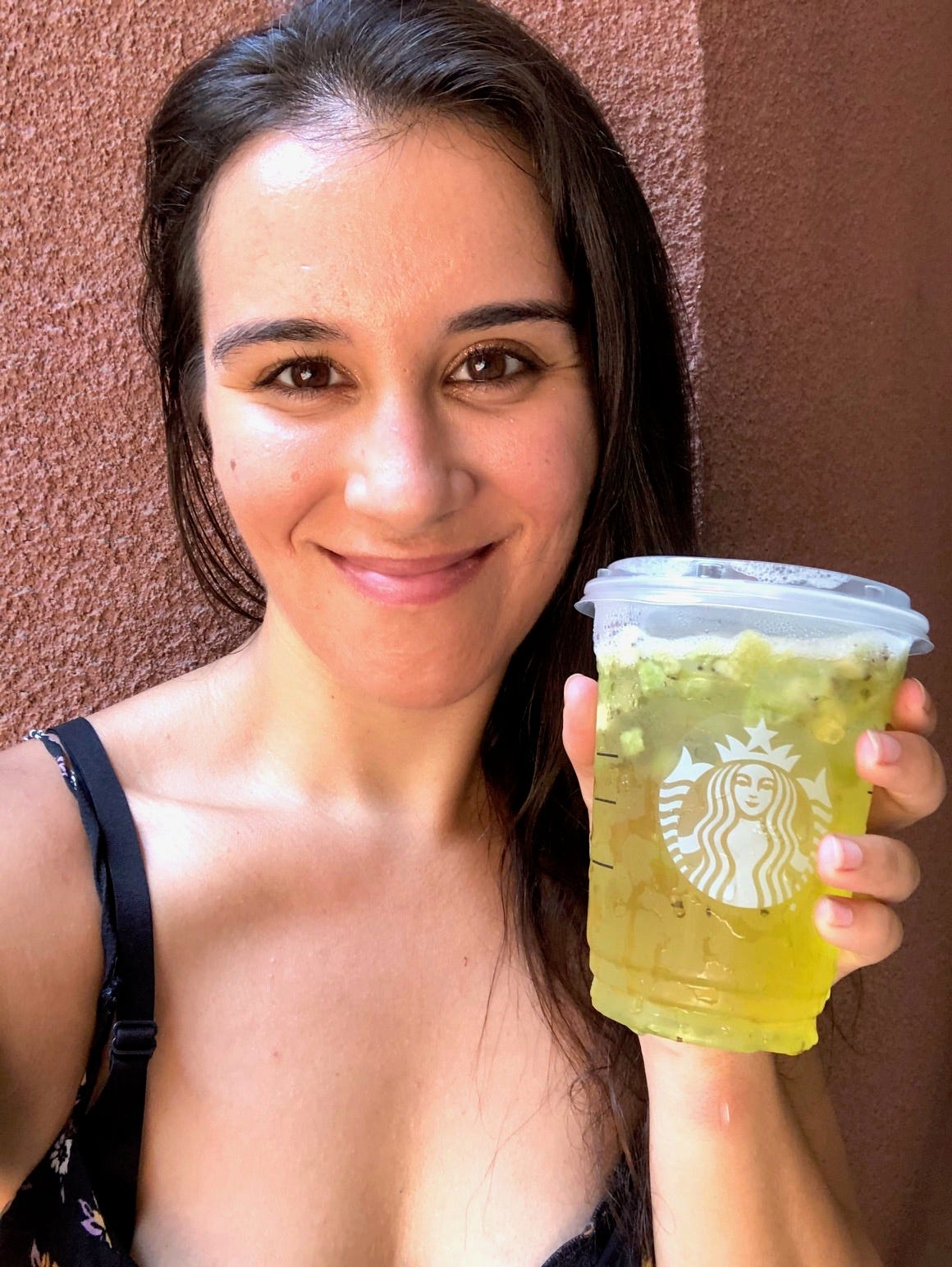 Anneta Konstantinides/InsiderI was surprised by how much the drink tasted like candy.

After I took my first sip of the drink, I wrote in my notes that it tasted almost like Fruit Roll-Ups or a green Jolly Rancher that had been melted and poured into a cup.

Joe found that the drink didn’t taste much like kiwi at all, even with the addition of the chunks. The Kiwi Starfruit Starbucks Refreshers just didn’t taste as fresh – or refreshing – as we were expecting from a summer drink, and was our least favourite of the three.

Starbucks’ three new drinks showcase a variety of flavours, but the Iced Guava Passionfruit was easily my favourite. 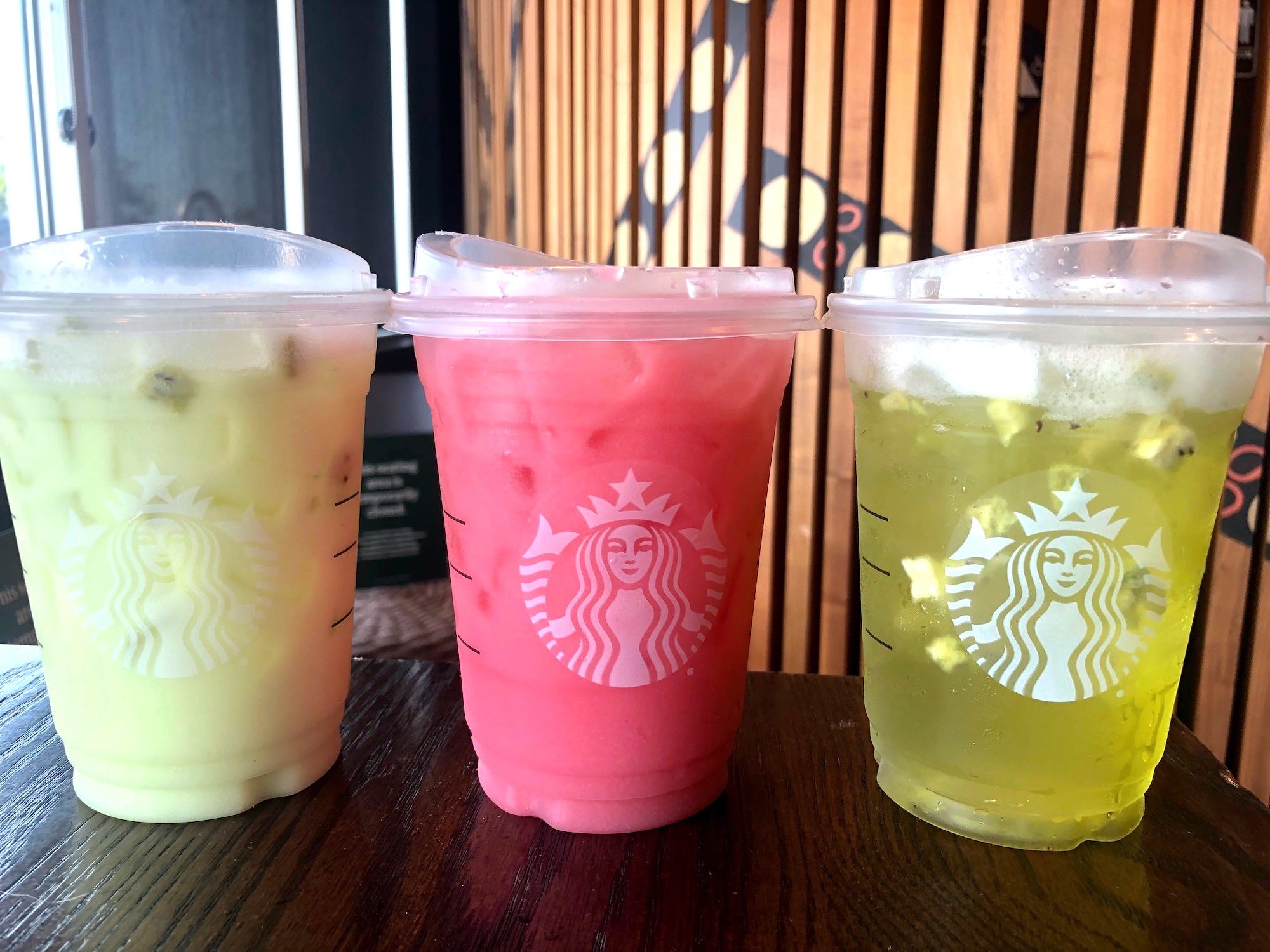 With its sweet guava flavour and light consistency, the Iced Guava Passionfruit was a refreshing escape on a super hot day.

I’ll definitely be ordering it again when the next heatwave hits, and maybe throw some tequila in.