When the second Death Star exploded in “Star Wars: Return of the Jedi,” it’s pretty likely that every living thing on the nearby forest moon Endor would have died. No Ewoks partying. No smiling Rebel Alliance soldiers.

It’s called the “Endor Holocaust” theory for a reason.

But in the “Star Wars” universe, everyone on Endor is fine. That explosion, seen above, is the plot point that the story arc of the new “Star Wars Battlefront II” is based upon: Revenge.

The new game — expected to launch on November 17 for Xbox One, PlayStation 4, and PC — stars a brand new heroine named Iden Versio. That’s her above, turning around. Here she is without that dark helmet on:

You can’t tell here, but she’s pretty pissed off that the second Death Star just exploded. She’ll seek revenge — on behalf of the sad, failing empire — throughout “Battlefront II.” Here’s what we know about the game so far!

As you've already learned, 'Battlefront II' has a narrative-driven, single-player story campaign -- that's a major addition from the first 'Battlefront' game, which was primarily focused on multiplayer.

The story focuses on telling the story of 'the other side' -- that of the Galactic Federation (the bad guys) -- after the events of 'Return of the Jedi.'

It's set in 'the 30 years between the destruction of Death Star II and through the rise of the First Order,' according to EA, which is to say 'Between the events of 'Return of the Jedi' and 'The Force Awakens.'' As such, you'll come across some familiar faces.

So, what do we know about this Iden Versio? We know she's the leader of 'Inferno Squad,' a special forces unit that's wrecking shop on Endor when the second Death Star explodes.

And we know that she's looking for revenge after that explosion -- here she is talking to some people who appear to be the remnants of the Galactic Empire as it's collapsing:

And we know that she has a drone of some sort hanging with her:

That drone plays into gameplay in the single-player campaign, and it's also a unique aspect of her rank among Galactic Federation soldiers.

'It's kind of what separates Iden from the rank and file Stormtrooper, it's what makes her part of Special Forces because you know, the Empire is known for its technological prowess and so giving her this combat ready droid gives her a greater range, a greater reach, more versatility, more flexibility,' game director Mark Thompson told Eurogamer in a recent interview.

From the sound of that, we're guessing that the drone enables various 'powers' in the game -- both combat- and movement-based powers.

But you don't always play as Iden in 'Battlefront II' -- sometimes you'll play as one of the iconic characters from the 'Star Wars' films, like Mr. Skywalker here:

Another big change coming with 'Battlefront II' is space battles, which look just as exciting as it sounds:

EA
There's not too much known about the space battles bit just yet, though it seems to be a multiplayer-only mode. EA's official word on it is this: 'Players can drop into the cockpit of the galaxy's most iconic ships, weave between asteroid fields and fly through imperial dockyards in high stakes dogfights.'

It looks like you'll also pilot TIE fighters and other ships along the way:

Expect large-scale battles, a major component of the 'Battlefront' series:

EA
It also doesn't hurt that the studio making 'Battlefront II' is most famous for the 'Battlefield' series -- a multiplayer-focused, large-scale war game.

Speaking of large-scale battles, at least one of the game's online multiplayer modes supports up to 40 players at a time: Expect standards like deathmatch/team deathmatch to make an appearance, as well as modes featuring notable characters like Darth Vader, Yoda, and Darth Maul.

The same goes for locations: Multiplayer maps will feature memorable places from throughout the 'Star Wars' film series. EA specifically says to expect 'a wide range of iconic locations from all three eras: prequel, classic and new trilogy, including new in-game locations such as Yavin 4's jungle canopies, the spaceport town of Mos Eisley, and Starkiller Base' in multiplayer mode.

There's also a new character progression mode in multiplayer -- the last game was knocked for being too shallow compared to other online multiplayer shooters. It looks like 'Battlefront II' is aiming to address that criticism with a more robust offering in both single and multiplayer, to say nothing of the addition of space battles.

Here's the full reveal trailer of 'Star Wars Battlefront II,' straight from EA -- the game is expected to launch on November 17 for Xbox One, PlayStation 4, and PC. 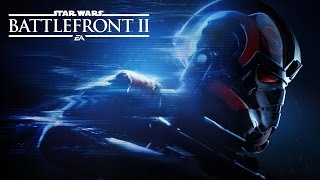