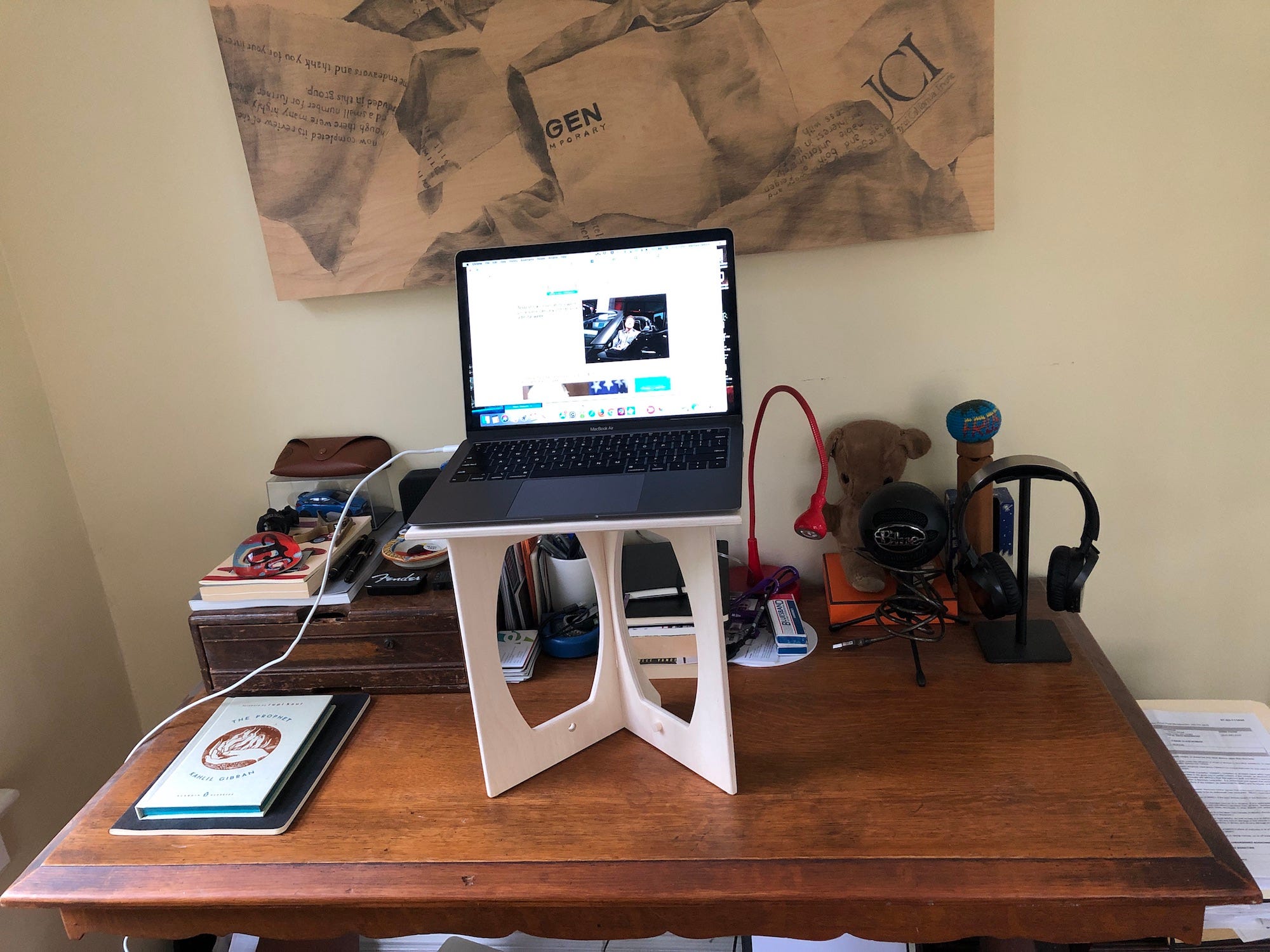 I think I got my first desk when I was about ten. For the following 41 years, despite knowing that there was a history of writing while standing that stretched back through Ernest Hemingway and other greats, I took a seat. First with pen and paper, later with a typewriter, and then with desktop and laptop computers.

In my experience, writers don’t like to mess with what’s working. My daily output for decades has been in the ballpark of 500-1,000 words, achieved while sitting, and I was disinclined to shake that up.

However, I heeded the modern assessment that sitting is death, while also studying my usually much younger colleagues pecking away at the high-tech standing-desk contraptions (when Business Insider moved our offices to Wall Street, everybody was offered a standing desk that can be moved up and down, in the event that a spell of sitting is desired).

I wasn’t ready to shake up my office desk, which is sort of a shrine to spending four years at Business Insider writing about cars. My home setup was a different story. I use a laptop there (it’s a desktop with a big monitor at the office), so while I was on a two-week staycation in August of 2018, I made the switch.


Read more:
I’ve been making coffee with a French press for a decade – and I’m convinced it’s the best way to enjoy a morning cup

I spent exactly zero dollars. Luckily, I had an old cardboard wine box that was precisely as high as it needed to be, and with precisely enough surface area when flipped upside down, to support a MacBook Air. I reasoned that such a lightweight, el-cheapo approach could both be easily switched back to the old arrangement – and, if I liked the new deal, replicated in wood for a more polished vibe.

My desk isn’t terribly large, and the stuff I have on it is stuff I want to keep on it, so the overall standing-desk footprint had to be modest in any case.

But although the box was the ideal shape and size, it eventually wore out. I initially thought about my custom-made idea, but some searching on the internet turned up StandStand, a Massachusetts-based company that got its start on Kickstarter and was founded by a Harvard doctorate who now teaches Arabic.

StandStand sells a variety of desks, with a large top-of-the-line model in bamboo going for $US425. I bought the most basic portable model, which is made of birch and costs $US59. I breaks down into three pieces, so you can bring your standing desk anywhere. It’s also quite sturdy. I’ve been using it for over a year now, and I’m beyond delighted. 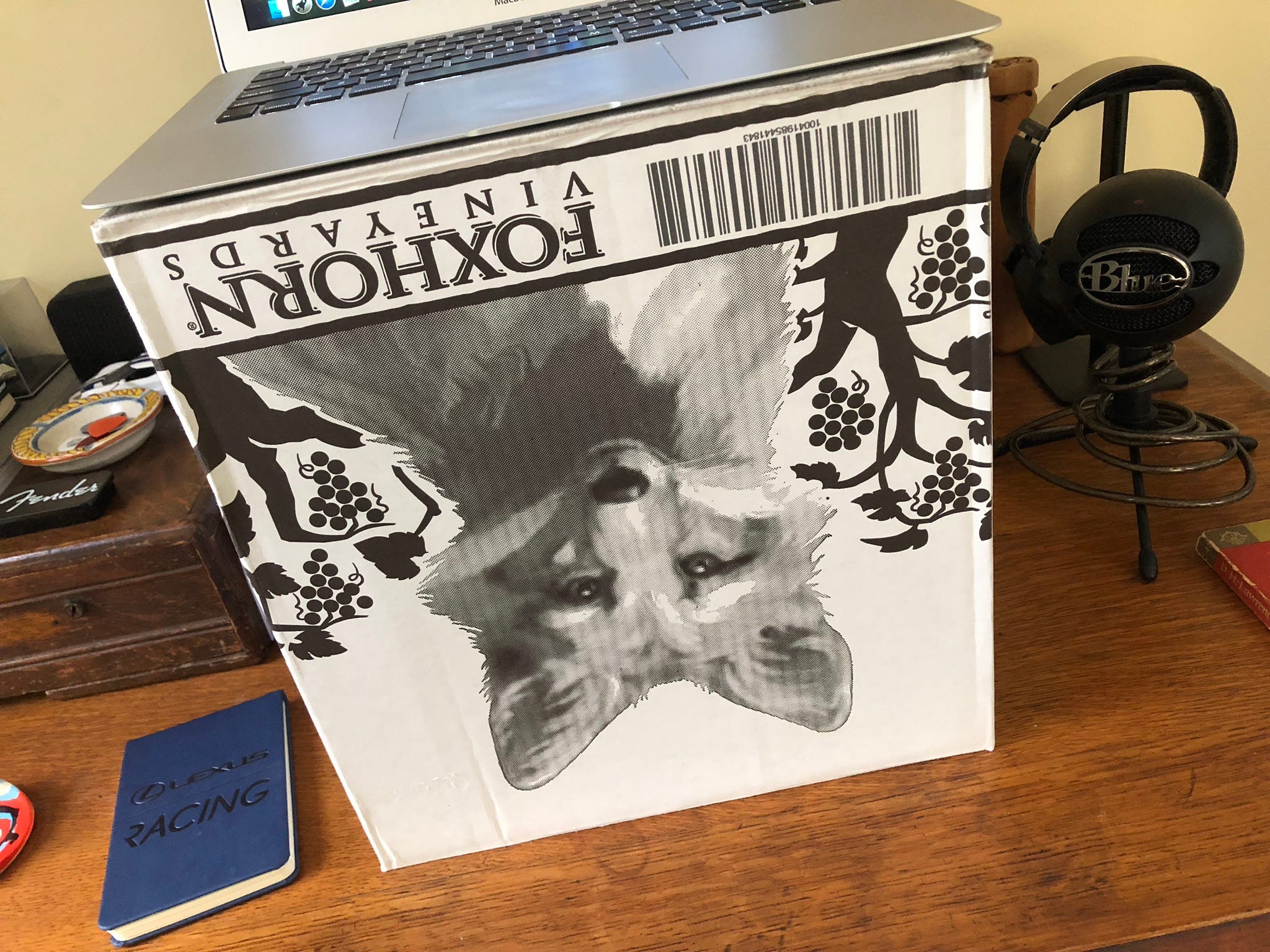 My standing desk coincided with wearing my Apple Watch 3 more consistently, so I now know that thanks to a humble wine box from Foxhorn Vineyards (and later the StandStand desk), I’m routinely beating my standing objectives. I also generally feel better – but not radically better. Anybody who thinks a standing desk will be life-altering probably expects too much. The benefits are more incremental than dramatic, is seems.

There’s also a physical-adaptation curve to deal with. In my case, my lower back was in moderate pain for about a week when I first made the switch. But I played through it. Worth the struggle, as I can now put in almost an entire day without sitting down. I also didn’t notice any major changes to my writing process. I more or less picked up where I left off, just on my feet instead on my rump.

I wasn’t actually the worst sitter in the world, by the way. My system was to sort of perch on the edge of my chair to keep my back as straight as possible. But this is not an easy discipline to enforce. And although I worked fine in the pre-internet days, when I could write a sentence and then spend the next 15 minutes thinking about the next sentence, the pace of online publishing doesn’t permit that. A digital journalist can find him or herself sitting for 12 straight hours.

So in the end, I’m glad I finally stood up. So glad, in fact, that I also switched to a standing desk at the office.

Of course, in both places, I kept my chair.

But as far as the home office goes, the $US60 standing desk from StandStand is here to stay.