Stamps.com gained more than $US1 billion in market capitalisation Thursday, in a move that neither history nor Wall Street analysts foretold.

Shares in the internet-based mailing and shipping firm surged as much as 63% Thursday after the company announced earnings results that far exceeded analysts’ expectations. Adjusted earnings per share were $US2.120, versus the $US0.983 analysts predicted, according to a Bloomberg poll. Sales also beat expectations, coming in at $US160.90 million versus the $US142.33 million the Bloomberg survey of analysts predicted.

The blockbuster stock performance is ironic in light of where shares were almost exactly a year ago. Stamps.com announced in an investor call February 21, 2019, after market close that it would not renew its exclusive partnership with the US Postal Service, so that it could expand partnerships with other shippers such as Amazon and UPS.That ended a partnership that had dated back to 1996. Shares traded down from their closing price as much as 58% the next day.

They continued their decline in May, falling by 52% after the company slashed its 2019 earnings forecast and projected declines into the following two years.

Shares recovered some of those losses in October when Stamps.com entered a deal with shipper UPS. But Thursday’s surge was more than double what shares saw in October. That surge came even as revenue declined for the year versus 2018 – just by less than the Street expected. Stamps.com said revenue could be as much as $US600 million in 2020.

“In 2019, we continued to make significant strides towards our goal of being the leading worldwide multi-carrier e-commerce software company,” Ken McBride, Stamps.com chairman and CEO, said in a statement. 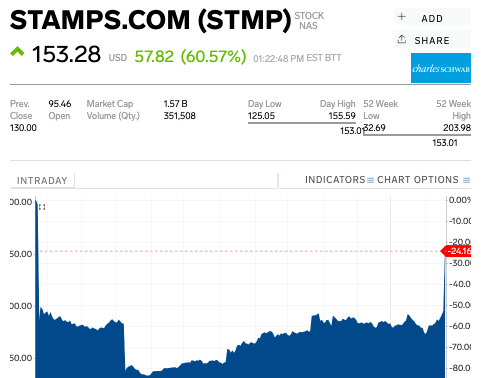