Warning: There are spoilers for “Spider-Man: Into the Spider-Verse” ahead.

If you head out to see Sony Pictures Animation’s well-reviewed “Spider-Man: Into the Spider-Verse” this weekend, prepare yourself for a Stan Lee cameo which may make you emotional.

The former president and chairman of Marvel Comics has made appearances in more than 50 Marvel titles ranging from “X-Men” to “Deadpool 2.” “Spider-Verse” is Lee’s first Marvel cameo after his death at the age of 95 in November.

After the death of the original Spider-Man, Peter Parker (voiced by Chris Pine), Miles Morales heads to a store to purchase a costume in his honour. Morales has just recently learned he also has powers similar to Spider-Man after getting bit by a radioactive spider.

When he goes to purchase the costume, the cashier is none other than an animated Stan Lee.

It’s the line he says that may make you choke up.

He’s talking about Spider-Man, but he could just as easily be referring to how the audience feels about Lee knowing this will be one of the final times we’ll see him in a Marvel cameo.


Read more: Stan Lee has made 57 cameos in the Marvel universe – here they all are

Miles asks him what happens if the costume doesn’t fit. Lee then says it always fits before a sign on the wall is shown which reads, “No exchanges or refunds.”

The movie ends on a quote from Lee as well.

“That person who helps others simply because it should or must be done, and because it is the right thing to do, is indeed without a doubt, a real superhero.”

A thank you to both Stan Lee and Steve Ditko appears underneath for “telling us we aren’t the only ones.”

His cameo is extra special not only because it’s his first Marvel cameo after his death, but because Lee created Spider-Man along with artist Steve Ditko.

You can read our review of “Spider-Verse” here. It’s one we definitely recommend seeing over the holidays. 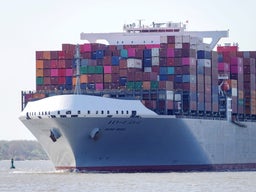