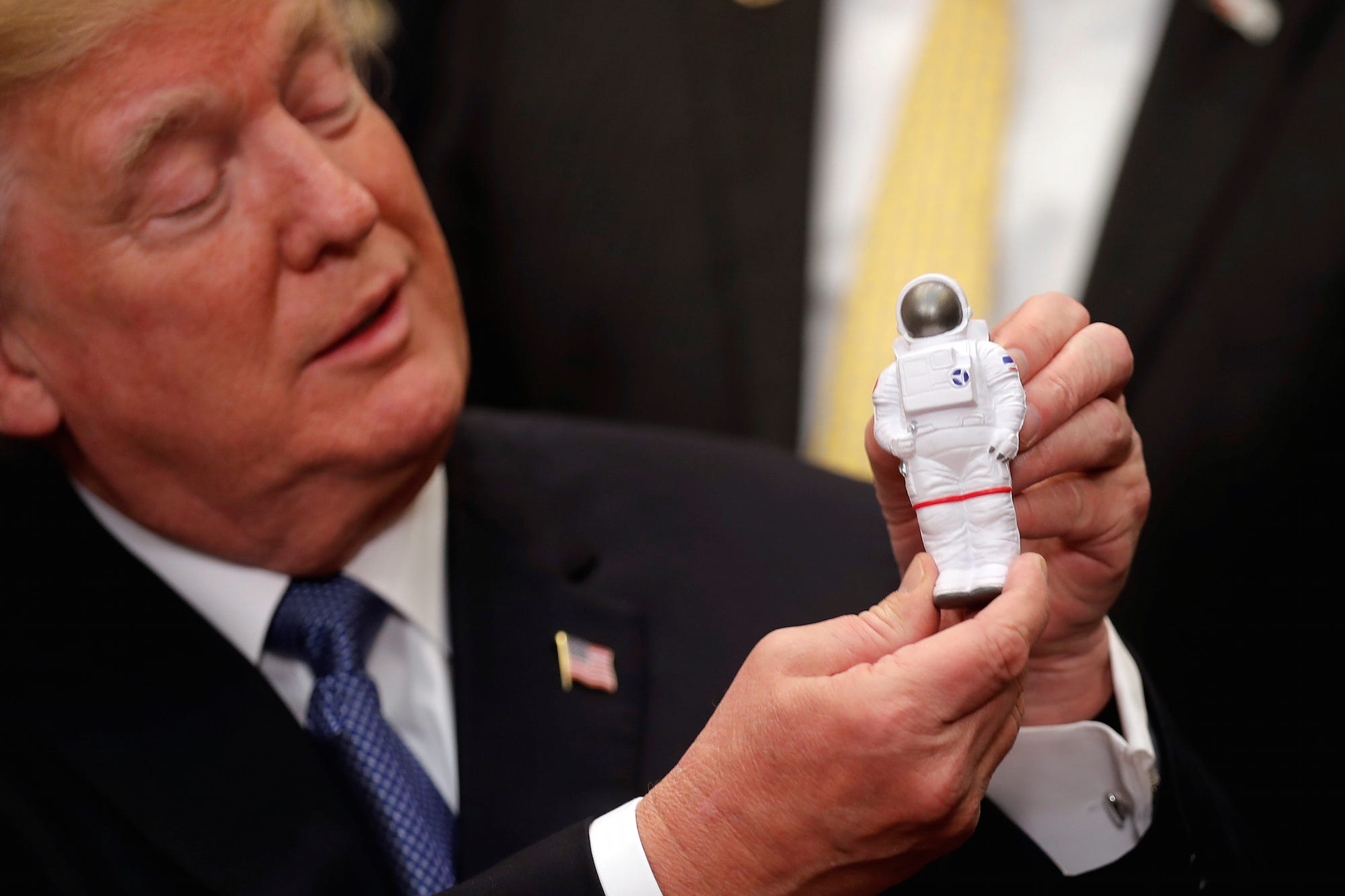 Reuters/Carlos Barria‘NASA was Closed & Dead until I got it going again,’ President Trump claimed in a Wednesday tweet rife with falsehoods.

SpaceX on Tuesday night launched an early prototype of a Starship rocket hundreds of feet into the air, hovered it across the beachside launch site, and then landed it on a concrete pad.

The full-scale vehicle, called Starship SN5 (for serial number 5), looked more like a flying grain silo or beer can than an early version of a Mars-bound rocket. Still, the feat represents a key step toward SpaceX founder Elon Musk’s dream of creating a fully reusable space vehicle that can reach, return from, and help populate the Red Planet.

In Wednesday tweet rife with falsehoods, US President Donald Trump reshared a NASASpaceFlight video of SN5’s flight – and appeared to take credit for SpaceX’s flight by insinuating it was part of a NASA program.

“NASA was Closed & Dead until I got it going again. Now it is the most vibrant place of its kind on the Planet…And we have Space Force to go along with it. We have accomplished more than any Administration in first 3 1/2 years. Sorry, but it all doesn’t happen with Sleepy Joe!” Trump claimed.

After the tweet, numerousspaceflightjournalists, industry experts, and even an astronaut pointed out that Trump was far from the mark. 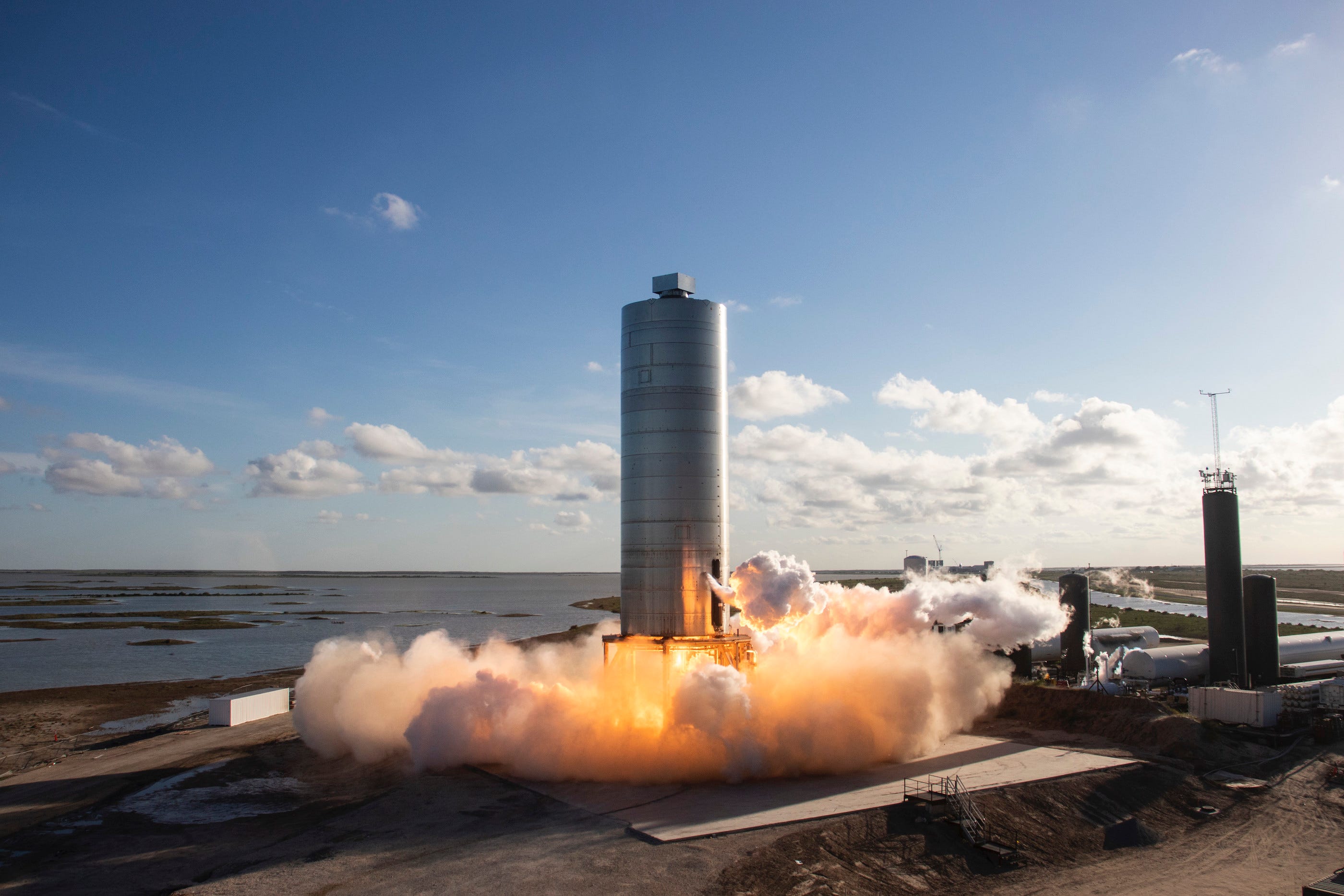 SpaceXThe SN5 Starship model lifting off for a ‘hop’ test on Tuesday, August 4, 2020.

“Fact check: – NASA was neither closed nor dead at the start of the current administration. – Many recent NASA successes have their origins in prior administrations. – The Starship test the president is retweeting has nothing to do with NASA; it’s a private effort by SpaceX.”

Per Foust’s first point, NASA has been operating continuously since its creation on October 1, 1958.

With his second bullet point, Foust was referring to spaceflight commercialization work by the Bush and Obama administrations that preceded Trump by more than a decade. In 2004, President George W. Bush started a commercial cargo-spaceship development program at NASA. The goal was to bolster cargo transportation capabilities to the International Space Station ahead of the 2011 retirement of NASA’s space shuttle program.

That effort, which funded SpaceX to develop an uncrewed vehicle called Dragon, preceded and informed a follow-on NASA effort called Commercial Crew. President Barack Obama first funded the program in 2009 and authorised funding until he left office in 2016. That funding enabled SpaceX (and Boeing) to develop a crewed vehicle.

That effort culminated in SpaceX’s most recent achievement: resurrecting crewed spaceflight from American soil. Specifically, the company leaned on $US2.7 billion, most of which was awarded by 2014, to develop its Crew Dragon spaceship. The vehicle launched in May with two astronauts on board and landed in August, successfully completing its first spaceflight with people.

“This does a disservice to the nearly 17,000 dedicated women and men of @NASA,” Phil Larson, a former SpaceX employee, tweeted in response to Trump’s claims.

After this story was published, Leland Melvin, a former NASA astronaut, posted his own thoughts about Trump’s claims on Facebook.

“This is a lie,” Melvin said. “I worked at NASA for 24 years and not once during that time was it closed except for Congress not being capable of producing a budget and therefore I got furloughed along with many of my friends and colleagues but it never shutdown.”

He added: “Honour, legacy, teamwork, discovery, pride and advancement of all people, our civilisation, is what NASA is all about. Which I believed in then and now. Young Bloods always seek the truth. Stay honorable and wise. Attributes that you expect from the President of this United States of America. Godspeed on your journey.”

SpaceX has received some funding and assistance from NASA for Starship development, such as orbital refilling of fuel tanks, which is a necessity to getting the spaceship out of low-Earth orbit. NASA also awarded a $US135 million contract to SpaceX on April 30 to develop a Starship moon-landing system, though that work is just beginning – and the company’s current Starship test program heavily predates it.

To date SpaceX has predominantly and privately raised hundreds of millions of dollars to fund Starship’s development. Musk has also ordered many of the rocket company’s thousands of employees to prioritise the vehicle’s development effort at SpaceX’s commercial launch site in Boca Chica, Texas – a private, non-governmental facility.

The Biden campaign declined to comment on the matter and instead provided a prior statement from the Democratic candidate about the splashdown of Demo-2, congratulating those involved.

Spokespeople for the White House and SpaceX did not immediately respond to requests for comment from Business Insider. A spokesperson at NASA said the agency would seek an appropriate person to comment on the matter.

Have a story or inside information to share about the spaceflight industry? Send Dave Mosher an email at [email protected]m or a Twitter direct message at @davemosher. More secure communication options are listed here.