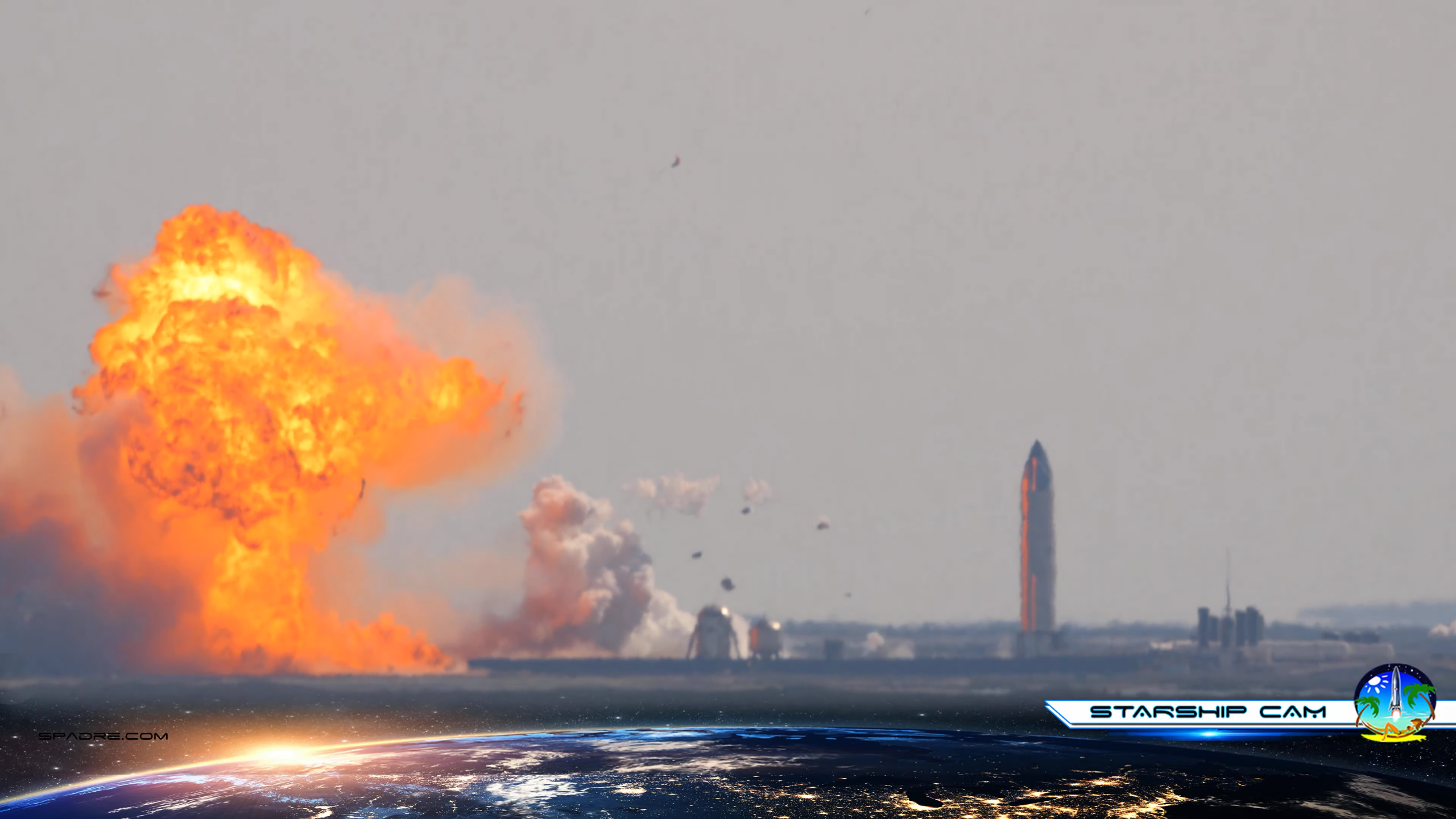 Through the south Texas haze on Tuesday, SpaceX pulled off a stunning high-altitude test flight of a Starship rocket prototype. But the vehicle failed to stick its landing.

The roughly 16-story test vehicle, called Starship serial No. 9, met the same fate as its predecessor, SN8: It slammed into the landing pad, resulting in a catastrophic explosion.

SN9 lifted off a pad in Boca Chica, a remote strip of land in southeastern Texas, around 3:25 p.m. ET under the thrust of three truck-size Raptor rocket engines. The vehicle then soared to 6.2 miles (10 kilometers), gradually cutting its engines on the way up.

Using just one engine, SN9 hovered at the peak of its flight for about 30 seconds, then cut that engine and belly-flopped toward the ground. The test emphasised Starship’s need to control its descent from space using small wings.

SpaceX is finalising a massive new funding round. Here’s why investors are clamoring for one of the world’s most valuable startups.

As SN9 fell back to Earth, the rocket reignited its engines in an attempt to quickly turn itself upright. But it appeared to lack enough thrust from at least one engine, causing the ship to lean to its other side and hit a concrete pad at an angle, exploding its remaining fuel reserves. SpaceX confirmed Tuesday night via its website that one of the engines failed to reignite during the landing attempt.

Chunks of the steel ship flew thousands of feet into nearby coastal prairie. When the dust and smoke cleared, only the charred residue of SN9 remained.

SPadre.com captured the incident from a camera on top of a building in South Padre Island, which is located about 9.5 kilometers (5.9 miles) away:

SpaceX also livestreamed the flight. A camera near the landing pad recorded the descent from below and the explosion from a different angle:

“As you can see from the scene, we had â€” again â€” another great flight up to the 10-kilometre apogee,” John Insprucker, an aeronautical engineer at SpaceX, said during a live broadcast of the flight. “We’ve just got to work on that landing a little bit.”

The Federal Aviation Administration (FAA) said that it would be overseeing an investigation into the explosive landing, just as it did when the SN8 flight didn’t go as planned.

“The FAA’s top priority in regulating commercial space transportation is ensuring that operations are safe, even if there is an anomaly,” an FAA spokesperson said in a statement emailed to Insider. “Although this was an uncrewed test flight, the investigation will identify the root cause of today’s mishap and possible opportunities to further enhance safety as the program develops.”

Sticking the landing is a key part of SpaceX founder Elon Musk’s quest to realise Earth’s first fully and rapidly reusable rocket system. (You can’t reuse a rocket that gets severely damaged every time it launches and lands.)

SN9 represents only the upper stage of a two-part system: A roughly 23-story booster called Super Heavy is designed to one day heave the Starship spaceship toward orbit.

Eventually, Musk has said, the Starship-Super Heavy system could fly people to orbit, the moon, and Mars, where he hopes to establish the first human civilisation on another planet.

However, the company must first figure out how to land the rocket back on Earth in one piece, then quickly recycle it for its next launch. So far, its two attempts at flying Starship prototypes to high altitudes have not been able to land without exploding.

SpaceX first launched a Starship prototype of this kind in early December. The prototype â€” called Starship serial No. 8, or SN8 â€” roared tens of thousands of feet above the company’s south Texas facilities. As SN8 neared the ground, low pressure in a propellant tank caused the spaceship to slam into a concrete pad and explode. 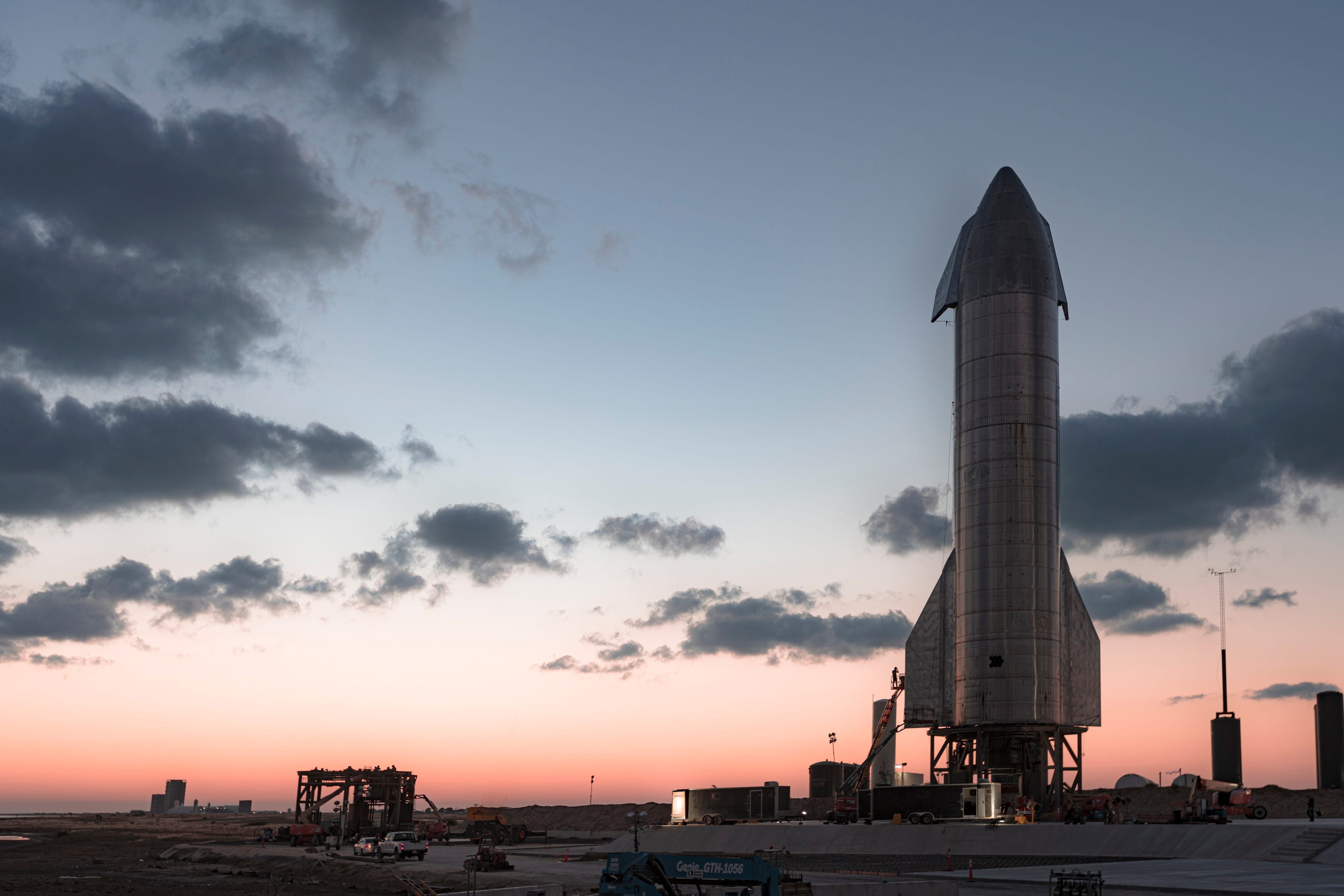 SpaceXThe Starship serial no. 8, or SN8 — a rocket ship prototype — sits at SpaceX’s launch site in the fall of 2020.

“During the landing flip manoeuvre, one of the Raptor engines did not relight and caused SN9 to land at high speed and experience a RUD,” or rapid unscheduled disassembly (jargon for an explosion), SpaceX wrote.

SpaceX still claims both the SN8 and SN9 tests as successes, though, since they demonstrate that the rocket can fly to suborbital altitudes and use its wing flaps to control its plummet back towards Earth.

“This is a test flight, the second time we’ve flown Starship in this configuration. We’ve got a lot of good data in the primary objective: To demonstrate control of the vehicle in a subsonic reentry,” Insprucker said during the broadcast.

On its website, SpaceX added: “These test flights are all about improving our understanding and development of a fully reusable transportation system designed to carry both crew and cargo on long-duration, interplanetary flights and help humanity return to the Moon, and travel to Mars and beyond.”

Starship’s road to orbit is paved with regulations

SpaceX plans to conduct more suborbital test flights â€” including with a newer prototype, SN10, which sat on a launchpad next to SN9 â€” to further master its spaceflight systems. It’s not yet clear whether shrapnel from the SN9 explosion damaged SN10.

The eventual plan is to rocket a Starship into orbit and test its ability to reenter Earth’s atmosphere without breaking into pieces and burning up. Before SpaceX can attempt this, though, it needs to get an orbital-class launch licence from the FAA.

Obtaining such a licence requires clearing many regulatory hurdles, the most laborious of which is called the National Environmental Policy Act. SpaceX previously completed an intense, nearly three-year environmental impact statement for Boca Chica launches in July 2014. But that plan described flights of Falcon 9 and Falcon Heavy rockets â€” not Starship-Super Heavy, which is several times larger than either existing vehicle.

The company is now waiting to start an environmental assessment process, or EA, which could take several months to complete. However, if it reveals “impacts that cannot be mitigated,” according to the FAA, SpaceX may need to conduct another impact statement, which can take an additional one to three years.

A leaked FAA draft document obtained by Insider recently revealed that SpaceX plans to dig natural gas wells in Boca Chica â€” most of which is a nature preserve â€” to fuel both Starships and power plants.